Here is today’s note from legend Art Cashin:  On this day in 1913, the Automobile Show opened in New York City (pictured below). 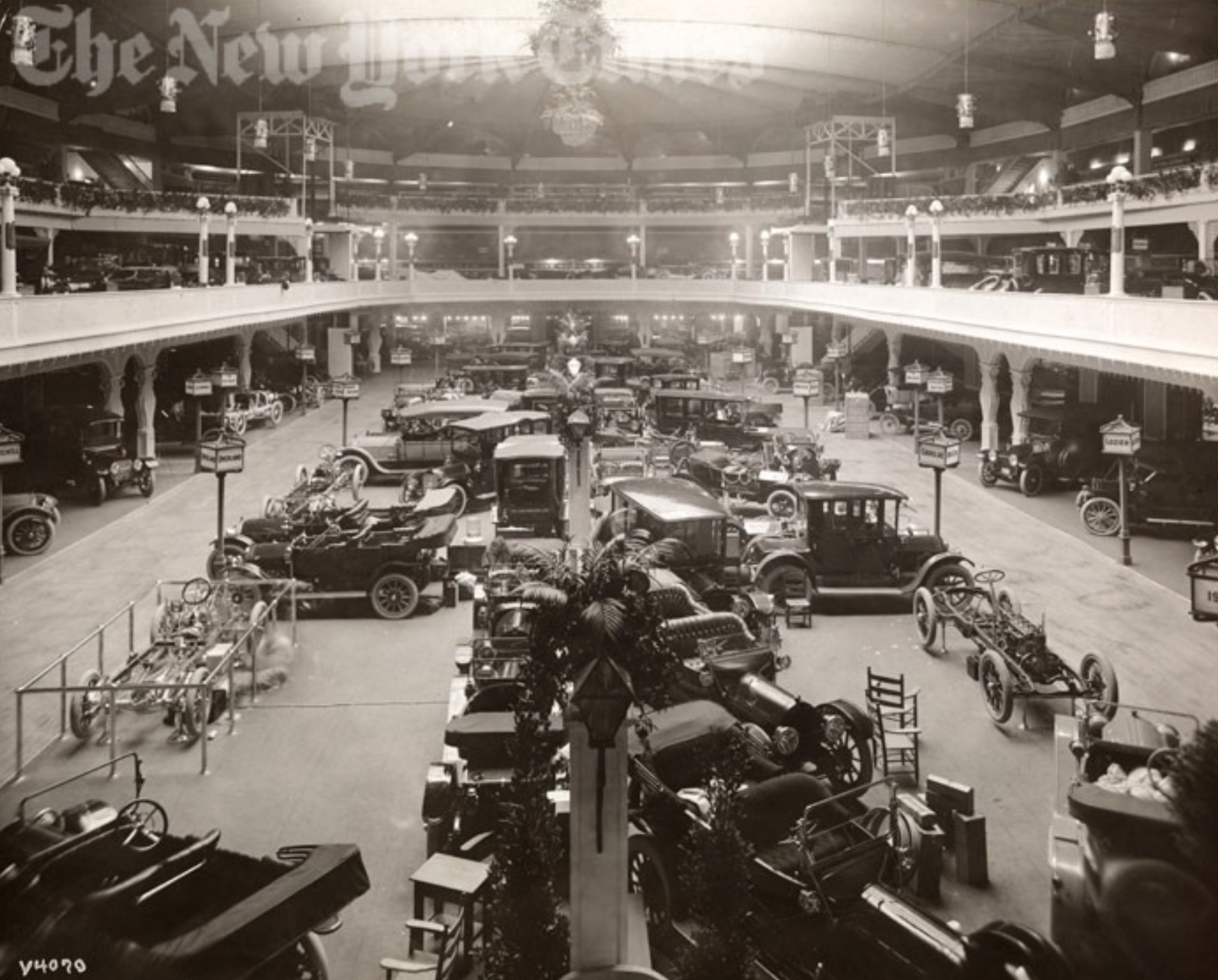 Since it had begun at the turn of the century, the New York Automobile Show had grown more and more important with each year. After all you needed a flivver to go with that new hot item the raccoon coat. And if you had the flivver, you definitely needed the coat since all cars were “open”. That is until this year.

The sensation of the show was an entry from that new upstart, the Hudson Motor Car Company of Detroit. The folks at Hudson introduced a four door fully-enclosed vehicle, which they called “a sedan.”

The sedan, however, was not popular with everyone. Some criticized the design. And worse, a prominent clergyman of the day thought it was a gift of Satan. He worried about the morality of allowing a man and a maid to be un-chaperoned in an enclosed vehicle.

Luckily, history shows he need not have worried. The sedan had little or no impact on America’s courting customs or morals.

To celebrate take some comely anthropologist to a drive-in movie. But don’t hang around too long waiting to see a feature called “Closed for the Winter.”

Stock markets weren’t exactly “closed for the winter” yesterday but some sectors did feel a distinct chill.

Market Tries To Shrug Off Oil But Crude Wins Out – The Dow and S&P opened mixed to lower and spent the first thirty minutes trying to get their act together.

Then, amid several commentators suggesting that the bulk of Mr. Trump’s nominees would be ultimately approved; stocks began to move higher in incremental steps.

In late morning, as the rally progressed, I sent this assessment to some friends:

Stocks shrug off small dip in crude. Buying has a partial basis in Washington comments that Trump’s team will likely be okayed and soon.

Around 12:30, WTI threatened to break below $51 and that seemed to get the attention of the stock crowd. The Dow led the way in the pullback, followed closely by the S&P. By 2:00, the Dow was back in minus territory.

By 2:05, the Dow was testing the opening lows. Luckily, they held and that brought on another rally attempt.

The late rally attempt flamed out around 3:40 when the market on close indications shifted to the sell side.

Among the sectors, energy stocks led on the downside, falling 1%. Despite the selloff in the Dow and S&P, advances beat declines by nearly 2 to 1. A bit of an odd day with Nasdaq closing at yet another record high, albeit with rather weak breadth.

Some Caveats From An Old Pro – My good friend and fellow market veteran, Jim Brown, at Option Investor ran through several concerns in his overnight letter. Here are a few:

There is no shortage of analysts now calling for a market reversal. One of those was DoubleLine Capital CEO Jeffrey Gundlach. He said today that the post election gains will be reversed and investors should “peel off” their exposure to equities.

Sven Henrich from Northman Trader warned that the S&P was due to pull back to its 25-day moving average and that would represent a 4% or better decline.

Carolyn Boroden said there are eight different Fibonacci time cycles on the Dow and seven of them come due next week with the other coming due this week. She said this kind of setup normally leads to a market reversal 65-75% of the time. She also warned that a convergence of time cycles could also lead to a breakout and a new leg higher. I guess she can claim she was right regardless of what happens.

There is also the earnings cycle causing analysts to worry. Nearly every warning to date has mentioned the strong dollar. I reported above an earnings miss by WD-40 and they blamed it on the strong dollar. This is going to be a recurring theme throughout the cycle and could provide some disappointments for investors.

The S&P did something rare today. The index closed unchanged for the first time since Jan 3rd, 2008. Prior to that, it was 11 years before the last occurrence. Since 1980, the S&P has closed unchanged only 11 times. While that is interesting, it does not tell us where the market is going tomorrow.

We saw last week that resistance had moved up steadily from 19,950 to 19,990 but this week it appears to be moving lower. Sellers that were content to dole out their stock in measured increments as the Dow approached 20,000 are no longer sure that is going to happen so they are setting their sell stops lower and lower.

With three Dow components cut to a sell this week, GS, PG and KO, that is going to be an added drag to the Dow. As the index exhibits weakness it could induce other analysts to jump on the bandwagon and begin cutting ratings on other Dow stocks.

Nobody can predict the market direction from day to day but with a three-day weekend ahead and the terror risk from the inauguration the following Friday, there is little to incentivize investors to take new positions at a market top.

In addition, one member of the FoF consults a financial astrologer who expressed some concerns about danger on or around Inauguration Day. Just reporting.

Forget The Super Bowl Index – Just Check Your Calendar – Doug Kass noted a rather odd calendar effect in the “Trump Rally”. While it didn’t work yesterday (at least in the Dow & S&P), the post-election bulls seem to celebrate Tuesday.

Here’s a bit of what Doug wrote to a few friends yesterday:

Today is the 10th consecutive Tuesday since Election Day back on Nov. 8 that the S&P 500 has had a daily gain.

To put that into context, 97 of the 140 points that the index has added since Election Day have come on a Tuesday. That’s nearly 70% of all post-election gains.

We’ll see if the pattern persists.

Overnight And Overseas – Asia was a bit mixed. Tokyo rallied a bit on the weaker yen. Hong Kong and India rallied while Shanghai dipped on rumors of new stock issuance.

In Europe, the FTSE is trying for its 10th record close in a row. On the continent, stocks are modestly higher in rather heavy trading.

The peso and Turkish lira are at new lows in front of the Trump press conference. Base metals are higher and oil is rebounding. Gold is also higher, while yields are a smidge lower.

Consensus – While crude is a bit higher, there is a danger it could roll over. If so, a break below $50 could hurt stocks.

***ALSO JUST RELEASED: The Key Level In The Most Important Market In The World, Plus A Q&A About The Gold Market CLICK HERE.