As we kick off the final week of trading in November, today James Turk told King World News that the world is about to see a historic shift away from stocks and into gold.

James Turk:  “A lot of publicity is being given to the record highs in the stock market, Eric. The result is that people are getting very excited about the Dow Jones Industrials and the S&P 500. It is easy to sense the froth that one sees at market tops is building, which leads to an important question…

Has the stock market topped out? This is actually a trick question, Eric. The answer depends on which currency you are using to measure value as the key factor to determine whether a top has been reached.

I always use two currencies, the dollar and gold. Using two currencies leads to two different answers, which can easily be illustrated with this chart of the Dow Jones Industrial Average using gold as the measuring stick. 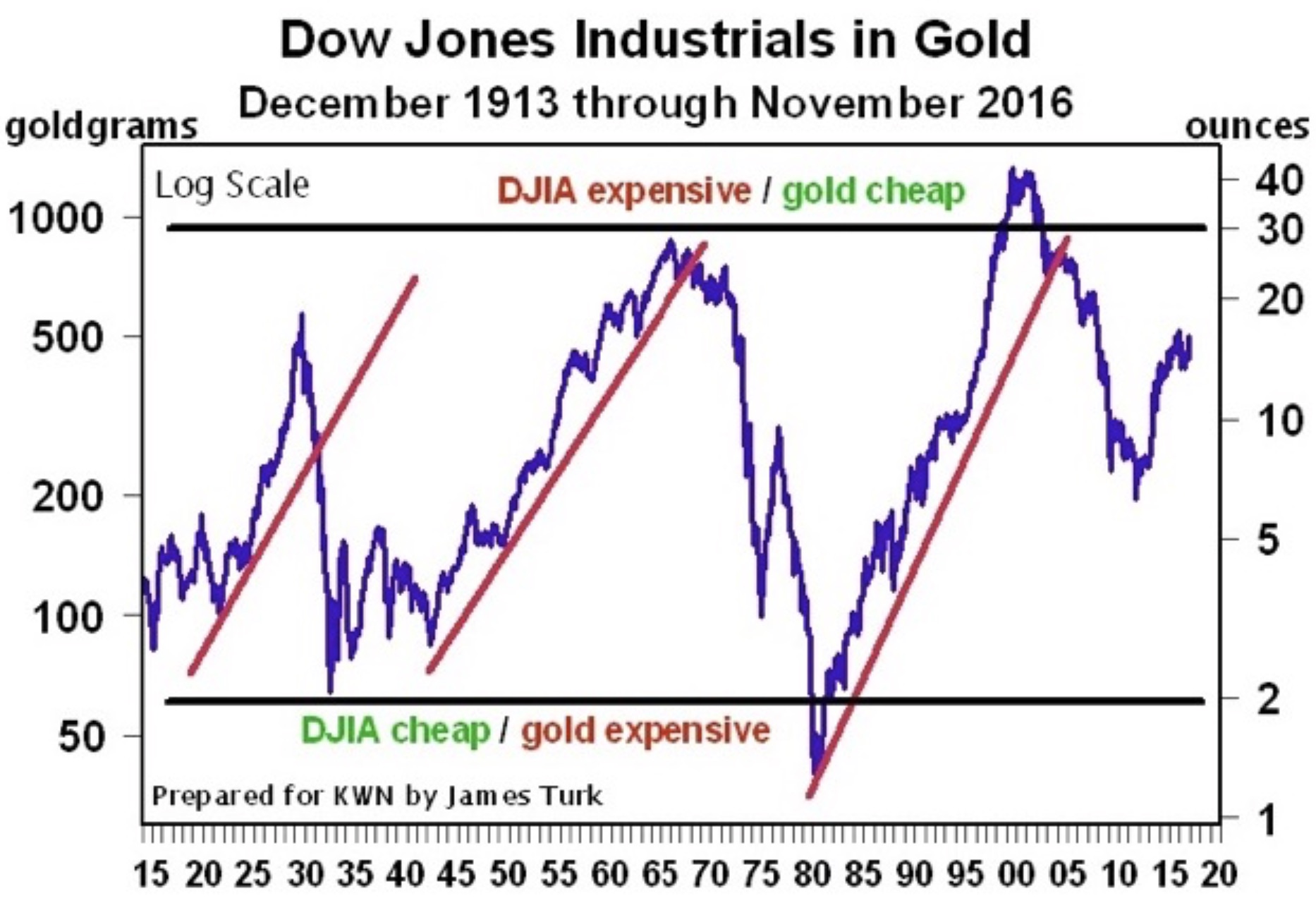 While the Dow Industrials is at a record high in dollar terms, it is 50% below its record high in gold terms. This means that the Dow is in a bear market when measured in terms of gold. That’s simply another way of saying that you are better off owning gold than the Dow.

So gold is in a bull market when measured against the Dow. Because this point is critical to understanding value and how investors manage their portfolios, it requires further explanation. At any time, every marketable asset can be valued, generally speaking, in three different ways. An asset can be overvalued, at fair value, or undervalued. We use an asset’s price to make that determination, but here’s where it gets tricky. Using the dollar to measure an asset’s value can be misleading.

The Key To Successful Investing
Obviously the key to successful investing is to sell overvalued assets and use the proceeds to accumulate undervalued assets. It sounds easy, but it is hard to do, particularly if you use a measuring stick that is unreliable. And as we can see from the above chart, the dollar is not a good measuring stick.

The dollar changes over time because of actions taken by the Federal Reserve and the federal government. Over the long term, the dollar is losing purchasing power, which is obvious from the above chart. In contrast, because an ounce or gram of gold is a tangible asset, it is a consistent unit. An ounce of gold today is no different from an ounce of gold one hundred or one thousand years ago. The dollar does not have this consistency.

1929, 1968 And 1999
When measured in terms of gold, the Dow Industrials peaked in 1929, 1968 and 1999, which also coincide with nominal peaks in terms of dollars. But because the dollar is always losing purchasing power because of its mismanagement by the Federal Reserve and federal government, each peak is only reached with an ever greater amount of nominal dollars. In other words, the purchasing power of a 1929-dollar is different from that of a 1968-dollar and of course, a 2016-dollar.

Here is the importance of this chart, Eric. First, it tells us when to be in cash or invested in stocks comprising the Dow. By “cash” I am of course referring to gold cash, not dollar cash. So in 1929, 1968 and 1999 you sold the overvalued Dow and kept the proceeds in undervalued gold. Then in 1933 and 1980, conversely, you used your overvalued gold to buy the undervalued Dow Industrials, which brings us to the present.

Tide About To Shift In Favor Of Gold vs Dow
We can see from the chart that based on historical valuations, the Dow is overvalued relative to gold. It is also interesting that despite the Dow’s new record and gold’s trashing the past two weeks, the Dow is even below the correction high made last year. That suggests that the 5-year correction in this chart could be ending with the trend turning once again in favor of gold. We will need to watch this chart closely over the next couple of months.

How Will The Shift In Favor Of Gold Unfold?
So, Eric, the bull market in gold and bear market in the Dow have not yet reached their conclusions. That will happen when once again it takes only about two ounces of gold to buy the Dow. What we don’t know is when that inevitable undervaluation of the Dow and the overvaluation of gold will eventually arrive, and also whether the Dow will be 36,000 or higher as some predict or 10,000 or lower as others predict. The Dow’s price will depend on whether the Federal Reserve inflates or deflates the dollar, which of course cannot be predicted.

Given history and the US government’s huge debt load, my guess is we can expect more inflation that will eventually result in that 36,000 target on the Dow Industrials in nominal dollars – or higher if inflation really gets bad. So it will take two ounces of $18,000 per ounce gold to buy the Dow at that moment – or more if inflation gets really bad. That would be the moment in the future to sell the gold being accumulated now to buy what would be an undervalued Dow.

What Should Investors Do?
In the meantime, keep accumulating physical gold and keep the big picture foremost in mind. I think the above chart is a good way to help KWN readers step back from the trees and look at the forest. Doing so will help provide the perspective necessary to avoid getting caught up in the post-election euphoria that currently pervades the stock market.”