As we kickoff another trading week, the bullion banks have been busy covering short positions in the gold and silver markets, plus the important story.

February 7 (King World News) – Here is a look at the COT charts for the gold and silver markets, which shows the commercials have been covering their short positions recently: 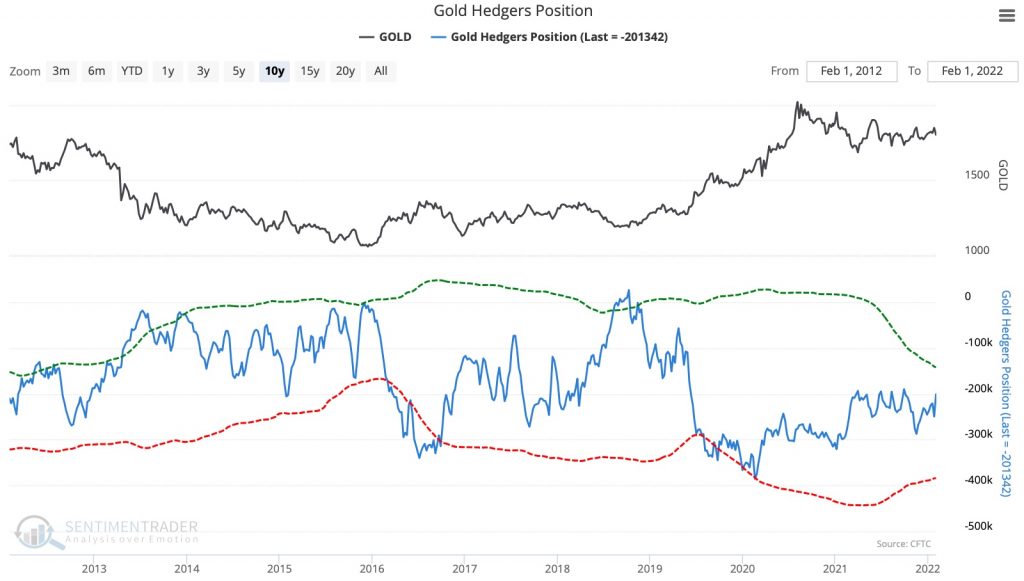 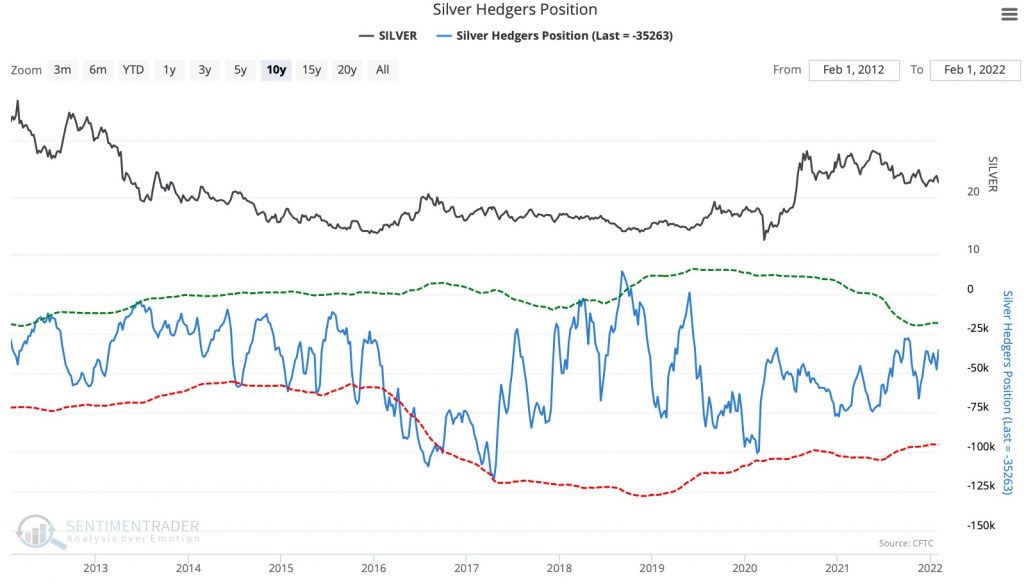 The Important Story
Peter Boockvar:  The important story again today is what is going on in the European bond market with Italian and Greek debt under the most amount of pressure. The yield on the 2 yr Italian btp is up 14 bps to .46%. It was -.10% one week ago. 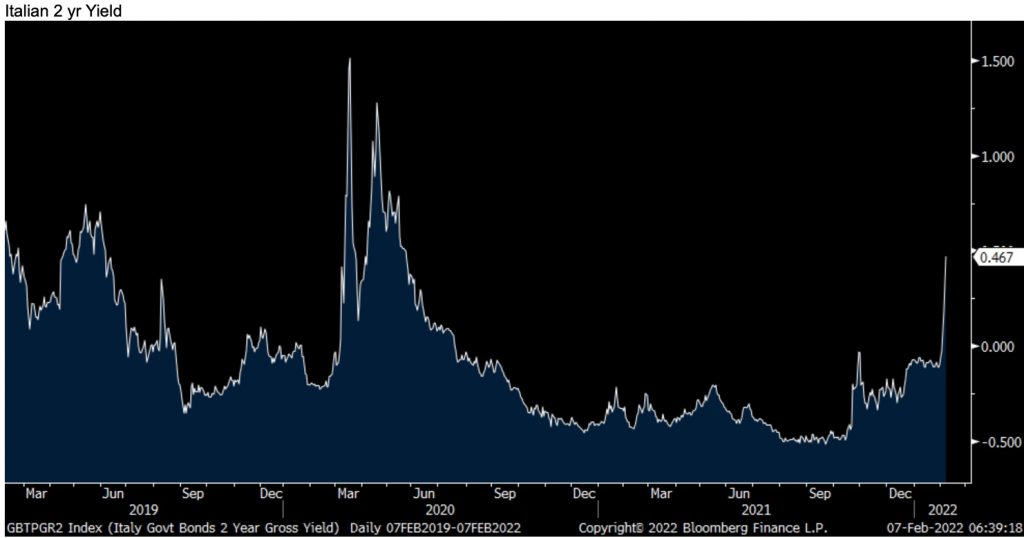 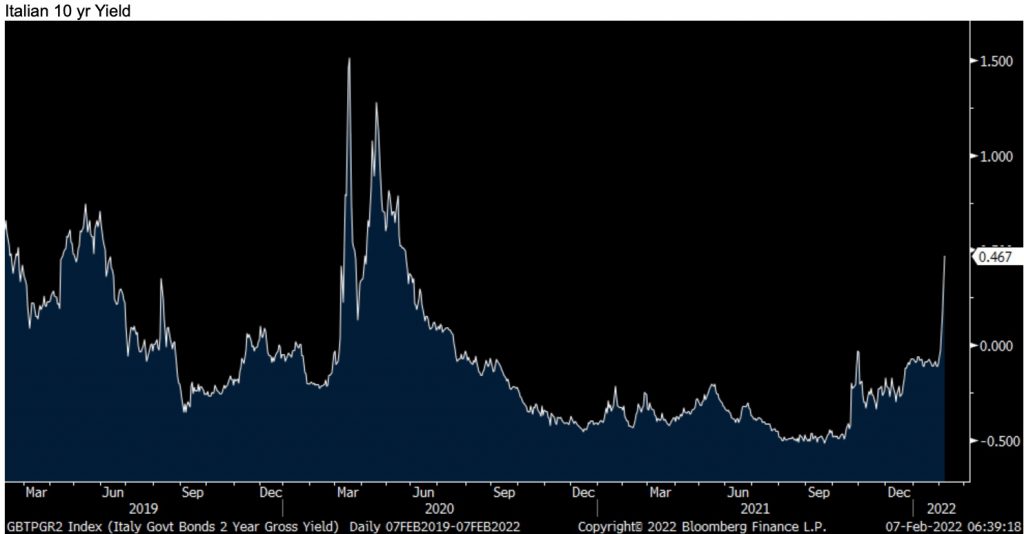 Because the Italian bond market is so large, the biggest in the Euro region with its debt to GDP ratio at 156% with 2.8 Trillion euros of debt (about $3.2 Trillion US), this is the key one to watch. It is quite ironic that Mario Draghi has a front row seat as the Italian Prime Minister and is presiding over the unwinding of the bond bubble he himself created. https://commodity.com/data/italy/debt-clock/ 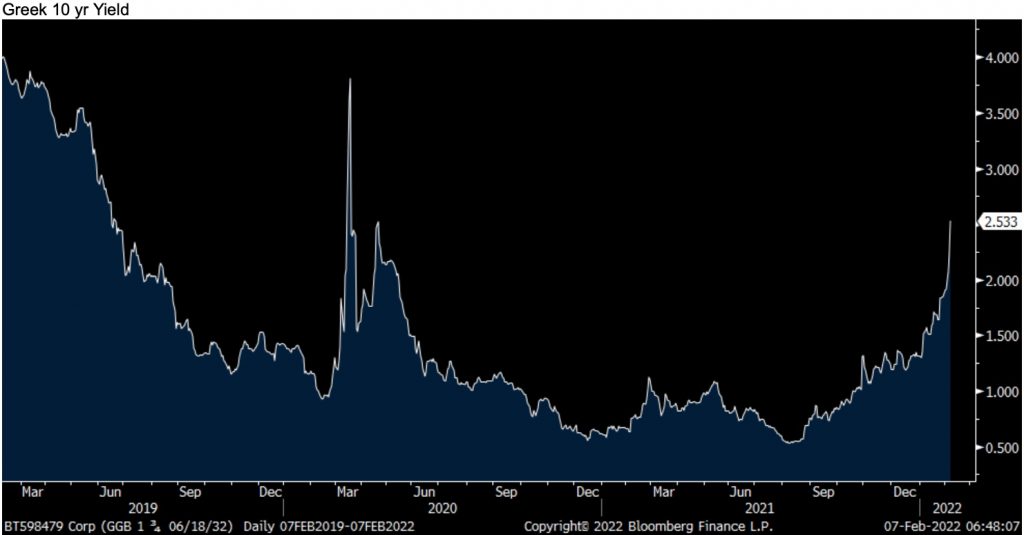 The 2 yr yield is up by 24 bps and is back above zero at +.14% vs -.28% one week ago. Greece at least relative to Italy has a much longer maturity on most of its debt post restructuring of years ago. US long rates are rising in sympathy with the 10 yr now at 1.92%. I’ll say for the umpteenth time to those who are trying to predict where US long rates go, if you are not including the direction of European rates in your guess, you are not looking at the full bond picture.

Over the weekend, Governing Council member of the ECB Klaas Knot, who is known to be more hawkish, did say they could hike rates as soon as October which would coincide with the end of QE. He’s not that hawkish though as he said the 2nd one could come in the spring of 2023. Lagarde does speak today and we’ll see if she comments on the yield jump over the past week.

Also, an interesting spot for yields is the Japanese 10 yr which is at .20%, the upper end of Governor Kuroda’s yield curve control. This is the highest yield since 2016 and Kuroda is going to have to ramp up the printing press again if the market tests him here. 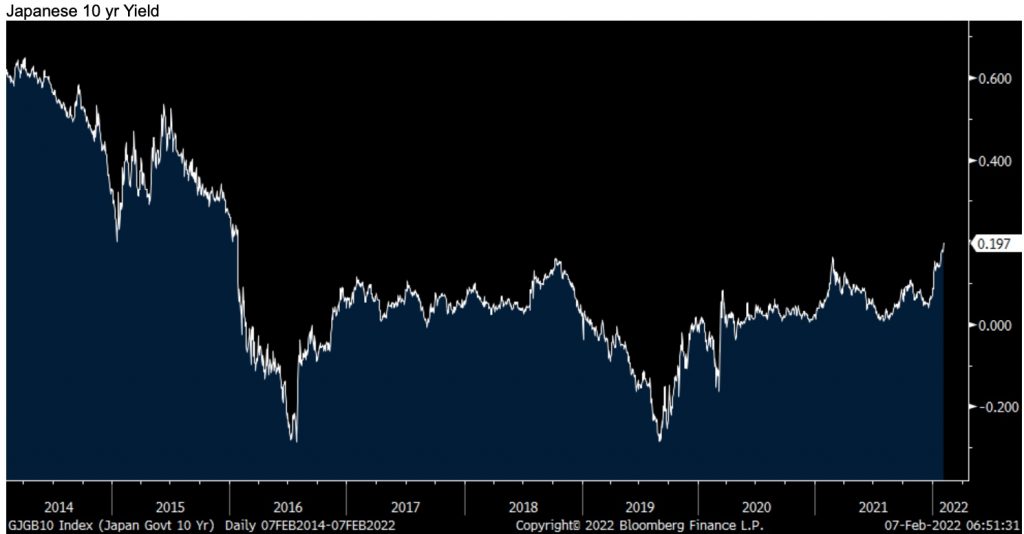 It was YCC that allowed the BoJ to dramatically scale back its bond buying over the past year. I like to look at the 40 yr yield the most as it’s most out of the reach of YCC and thus the closest thing the JGB market has to an actual free market. That yield was up 3 bps overnight to .88%, the highest since December 2018. 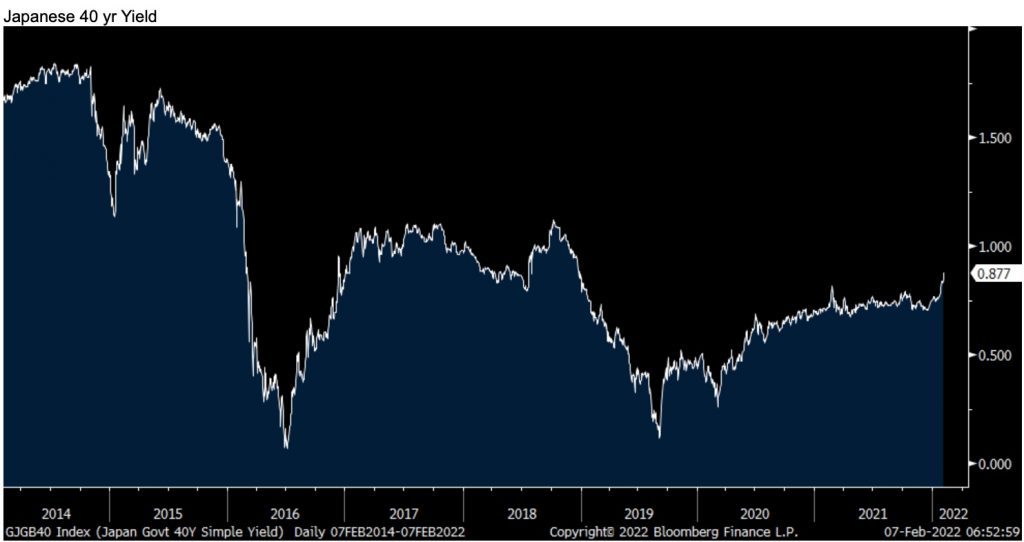 China’s private sector Caixin services PMI for January fell to 51.4 from 53.1. The estimate though was 50.5. China’s approach to Covid of course is mostly why it fell. With respect to pricing, “Input costs and prices charged increased, and service providers were under greater cost pressure. Neither gauge changed much from the previous month, but the gauge for input costs was apparently higher than the one for prices charged. Surveyed companies said high labor and raw material costs were the primary causes. Tightening epidemic control measures also increased service providers’ operational costs.” With regards to the outlook, “Businesses grew less optimistic. The gauge for future output expectations fell to its lowest in 16 months in January, though the figure remained in positive territory.” Until China pivots on Covid, this sector of their economy and this index will be hindered.

China’s stock market is back open after their holiday week and it did rally by 2% for the Shanghai comp while the H share index, which was open on Friday and was up by 2.8%, was little changed today. China has a lot of economic challenges, and certainly politically with its disturbing authoritarian political power approach but statistically speaking, its stock markets, both A shares and H, and also the Hang Seng reflect that, trading at around 10-12x earnings. Also open for the 1st time in a week is their bond market and the 10 yr Chinese yield is up just 1.6 bps to 2.72%.

Singapore’s January PMI fell .7 pts to 54.4 but it was at 52 in November. Markit said “Foreign demand notably improved at a survey record pace, supporting the growth in output at the start of the year. Amongst the sectors, the wholesale and retail sector saw the strongest expansion in activity.” With the supply problems, “Supply chain issues persisted, however, as lead times continued to lengthen at a severe rate. That said, the level of price inflation showed signs of easing across both input costs and output prices in January, which had been a positive sign.” Omicron is still an issue, albeit much less, but “Business sentiment meanwhile eased to the weakest since May 2021.” I remain bullish on this small city/state along with Southeast Asia generally. The Singapore Straits stock market is possibly the best performing this year globally, up 7.8%. I particularly like the REIT sector. The overall stock market trades at just 13.9x earnings and has a 4% dividend yield.

Back to Europe, Germany reported a less than expected December industrial production figure with it falling .3% m/o/m. It though was up ex energy and construction, with the latter down by 7.3%. It’s not market moving but we know the challenges German industry is facing, with supply problems, the China slowdown and now an energy crisis. I can’t emphasize enough though that all of Europe is in an energy crisis with the price of natural gas 4x what it was one year ago.

Big Acquisition Fueling Outperformance
Eric King:  “Shawn, Torq has notably outperformed its sector in the last quarter due to a very exciting acquisition for the company and you are still saying your are grossly undervalued. Why do you think that is?”

Shawn Wallace:  “Eric, Frankly it has been a really tough 6 months for all mining and exploration companies in general, however we have successfully acquired some of the best exploration assets I have seen in my career, and I have been doing this for over 30 years. In particular, we most recently acquired the Santa Cecilia Project which sits in one of the world’s most prolific mining belts in Chile called the Maricunga. In addition to the geological address, it sits adjacent and proximal to two 20 million ounce gold and 6 mill pound copper deposits known as Capsiche (adjacent) and Cerro Casale, which are owned and operated by the Norte Abierto JV comprised of mining giants Newmont and Barrick.”

Eric King:  “This is incredible, Shawn. What is so appealing about this project?”

The Big Brother Of Capsiche
Shawn Wallace:  “An industry expert recently comment that the Santa Cecelia looks like the big brother of Capsiche. This conclusion was logically drawn due to the nature of these large bulk tonnage systems coupled with the fact that there are 4 massive gold and or copper targets on which initial discovery holes were drilled historically. One of the most impressive holes in that historical data is the 945 meters of .45% copper equivalent. Additionally this hole, which categorically confirms major porphyry mineralization with impressive grade and width and that is wide open in all directions and to depth, is amazingly situated under an oxide gold cap which provided  great results in the previous drilling. This is truly a minefinders dream with the potential of an oxide gold deposit at the top of a hill, on top of a potential world class gold-copper porphyry, on one of the most prolific mining trends in the world, and surrounded by two major gold-copper deposits. Furthermore there is another porphyry target to the east on the project and a high-grade vein system to the west.

High-Grade Gold Discovery
Right after we acquired the project in late October we began working closely with the local communities to establish long term sustainable social agreements for permitting and access. We anticipate concluding this process shortly and if all goes well we will be drilling before the summer of this year to further test the oxide gold in the porphyry as well as a couple of holes on a high-grade gold discovery that looks to us as though it could get significantly bigger. I think once that is underway the opportunity will begin to gather some real momentum from a capital markets perspective and we will be off to the races. Our team is primed and ready to execute on all of our initiatives and we are fortunate to be working with some of the best professionals in the Chilean mining business. Torq Resources, symbol TORQ in Canada and TRBMF in the US.