In the wake of today’s chaotic trading in global markets, James Turk told King World News that new highs are coming for gold and silver.

Gold & Silver Bull Markets
January 27 (King World News) – James Turk:  “Gold and silver are playing out pretty much as I was hoping for when we spoke just over a week ago, Eric.

We are halfway through the 2-week period I expected the metals would use to test support, and both gold and silver are holding above their January lows. That’s good news…

What’s more, to my surprise gold opened in Asia today nearly $20 higher than it closed Friday in London. Upside breakaway gaps like that reflect panic buying from short sellers. It’s great that both precious metals are climbing higher, but there is another key development I am watching and waiting for.

Silver has to start leading, meaning that the gold/silver ratio needs to start inching lower. After touching 88 last week, the ratio is around 87 now, but was lower earlier today. A break in the ratio below 84 is the confirmation I am waiting for to show that silver is leading the metals higher. Hopefully we will see that happen soon.

A falling gold/silver ratio would be an important development. Silver normally leads in precious metal bull markets, so a falling ratio below 84 will be strong piece of evidence that this upward run in the metals is real and has staying power.

All of this raises an interesting question, Eric. Look at this palladium chart. 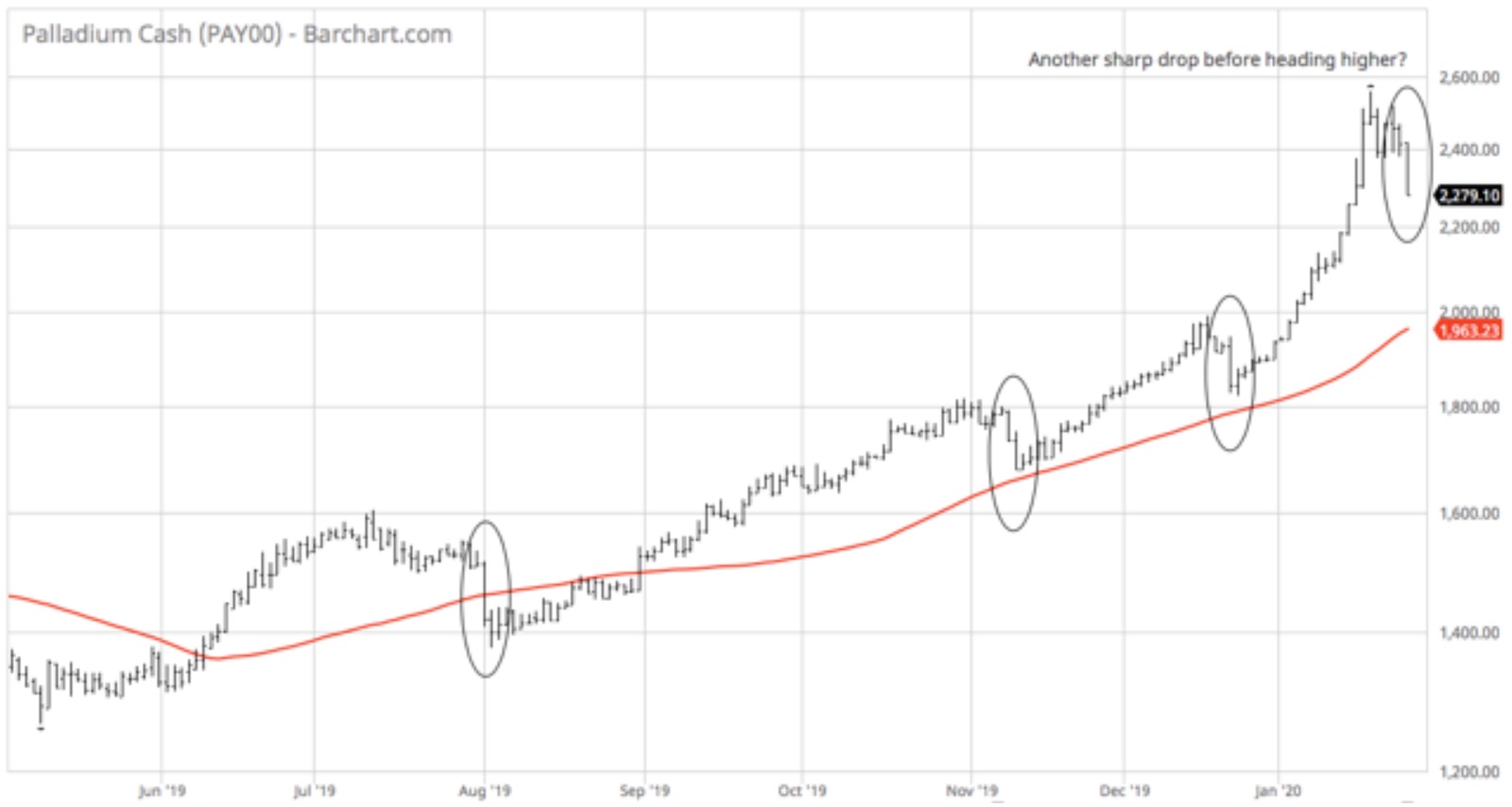 Doubles In The Prices Of Gold & Silver
Can gold do a palladium and nearly double in price in nine months? Yes, but it will happen in silver first.

To explain, palladium cannot be directly compared to gold or silver. It is first and foremost an industrial metal. Palladium coins have never circulated as currency. That means palladium’s principal demand arises from its industrial use, and the mainstream media – to the extent that they mention palladium at all – is bending over backwards trying to explain why palladium has been soaring even though industrial demand for the metal is tepid.

So despite what you may hear from the mainstream media, which is the mouthpiece of central planners, there is no shortage of palladium; instead, there is an excessive amount of fiat currency. We know from centuries of monetary history that when central bankers create too much currency, the holders of those currencies seek shelters to safeguard their hard-earned wealth. Palladium has been an obscure, unimportant precious metal, but in recent years has become a wealth-protecting shelter. Here is the interesting point that is most relevant to gold and silver.

In other words, Eric, the shelter that palladium provides to protect your wealth has a very small capacity. The next biggest shelter is silver, and a falling gold/silver ratio will reflect the tightness already developing for physical silver. That of course will be followed by people dumping currencies to move into the biggest shelter of all, which of course is physical gold. Its price will rise too, but not as fast as silver.

Flashback To 1979
The bottom line, Eric, is that silver and gold will do a palladium, just like they did back in 1979 or to a lesser extent, in 2011. It won’t happen tomorrow, but it will happen eventually unless governments and their central bank henchmen stop destroying the purchasing power of fiat currency.

In the meantime, we need to focus on two key events this week. The FOMC makes their interest rate announcement on Wednesday, and trading of the February Comex contract ends on Friday. As these events unfold, we need to take stock of what is happening in palladium.

The demand for physical palladium has essentially overrun the paper market for palladium. In other words, the price of palladium is being set by buyers and sellers of physical metal, not paper derivatives.

New Highs Are Coming For Gold & Silver
That development is a precursor of what to expect for silver, and then gold, in the weeks ahead. New high prices for the precious metals above $1,600 and $18.50 will mean that the market for physical gold and physical silver is taking over and leading the way, and just like palladium is now doing, leaving the paper market for gold and silver in the dust.

Greyerz – THE CLOCK IS TICKING: We Are Going To See Massive Wealth Destruction And The Greatest Transfer Of Wealth In History