It’s too late to save the financial system and a full-blown panic is coming.

The Coming Panic Will Be Too Late
July 1 (King World News) – Egon von Greyerz:  At some point, the Fed will react and in panic lower rates and inject fake money into the system. But that will be much too late. No amount of fake money can save a system which is morally and financially bankrupt…

The Big Picture Is Disastrous For Equities But Solid For Gold
Crescat Capital:  As we have laid out repeatedly, one of the most concerning issues with US interest rates, particularly at the long end of the curve, continues to be the overwhelming amount of Treasury issuances driven by the excessive twin deficits, fiscal and trade.

We believe the US economy is spiraling headlong into recession. On a real GDP basis, we think one has already begun due to today’s high inflation rate. Unemployment, a lagging indicator, is naturally the next shoe to drop. If indeed we are entering a recession, just like every other economic downturn since 1970, the fiscal deficit to GDP will only increase further. In most cases, it is the result of larger government spending to address the downturn and sometimes also declining nominal GDP levels. Looking at all recessions since 1970, fiscal deficit-to-GDP worsened by an average of 6.2%. We think the next downturn will be no different. However, government spending will likely be increasing with inflation rates already historically elevated so nominal GDP may also be rising. Ultimately, this combination should prove very positive for tangible assets, particularly gold. 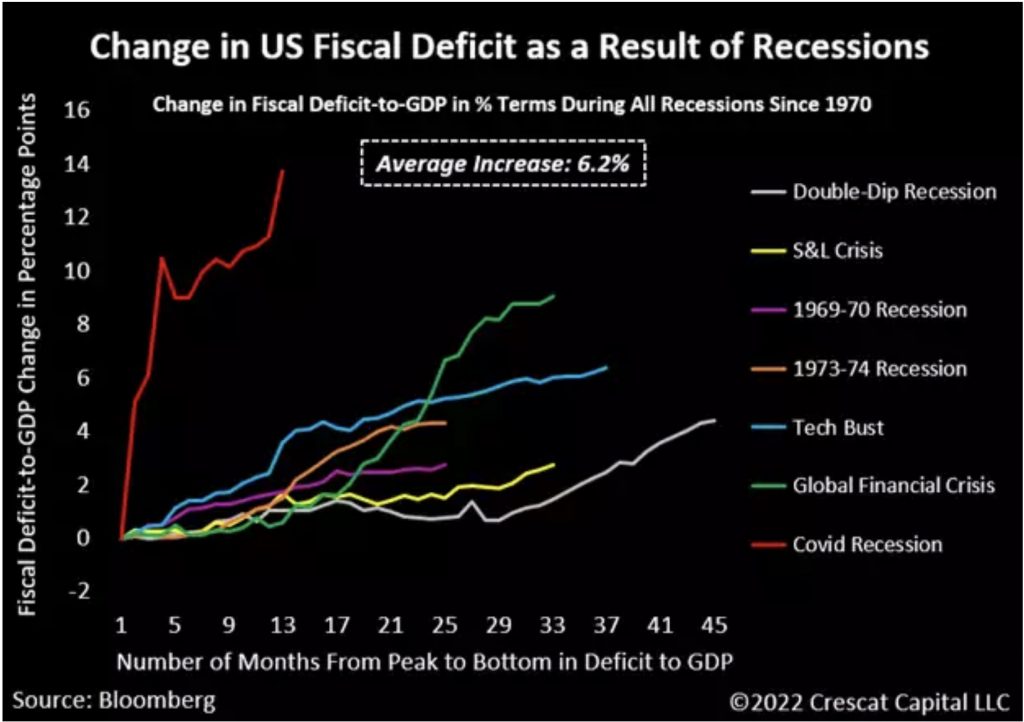 The Fed Can Only Do So Much
Macro imbalances are far worse than any other inflationary regime the US economy suffered. On a real earnings yield basis, the S&P 500 is almost twice as expensive as it was in the 1970s. Never mind the overall debt problem which also weighs on the ability of policy makers to fight inflation. For the first time in history, the US is experiencing a confluence of three macro extremes all at once: 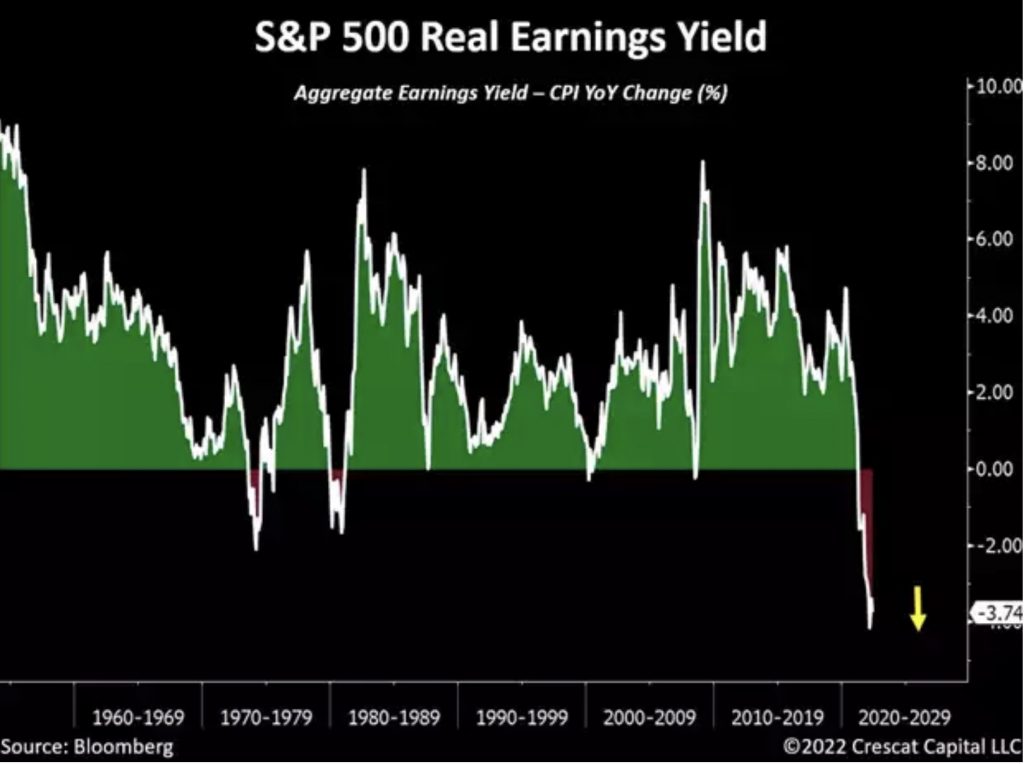 Dr. Copper Signaling Weakness Ahead
It amazes us how much commodities have fallen in just the last month despite years of depressed capital investment in producing new supplies. Protracted commodity bear markets are normally precipitated by years of aggressive capital expansion and overcapacity while today’s setup is the opposite. Still, we believe the recent decline in commodities is reflective of how challenging economic activity is likely to be in the coming months.

As the saying goes, copper is the only metal with a PhD in economics, and it is now down 21.5% from its recent peak. On a year-over-year basis, its performance just turned negative. On the one hand, it is a signal of a weakening economy and fear over Fed tightening that will almost certainly hit consumer demand and corporate earnings. On the other hand, it presents a buying opportunity for the long term for this critical metal in high demand and short supply to meet the needs of a global economy on an energy transition path.  New government stimulus programs to bring us out of the recession and facilitate the energy transition should be highly favorable to copper in the years ahead. 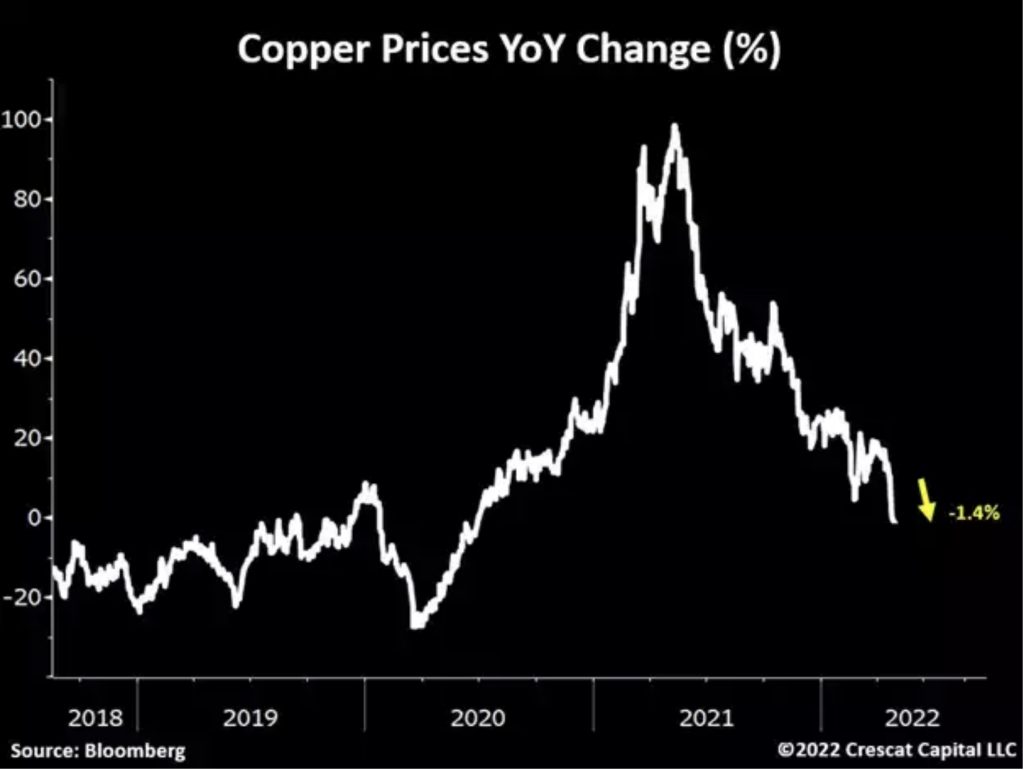 CPI Growth Not Slowing Down Yet
Understandably, the recent fall in commodity prices may raise questions about the future of inflation. Interestingly, the Fed’s inflation nowcast is showing no signs of a slowdown and it is still projecting a slight increase in CPI for this month. 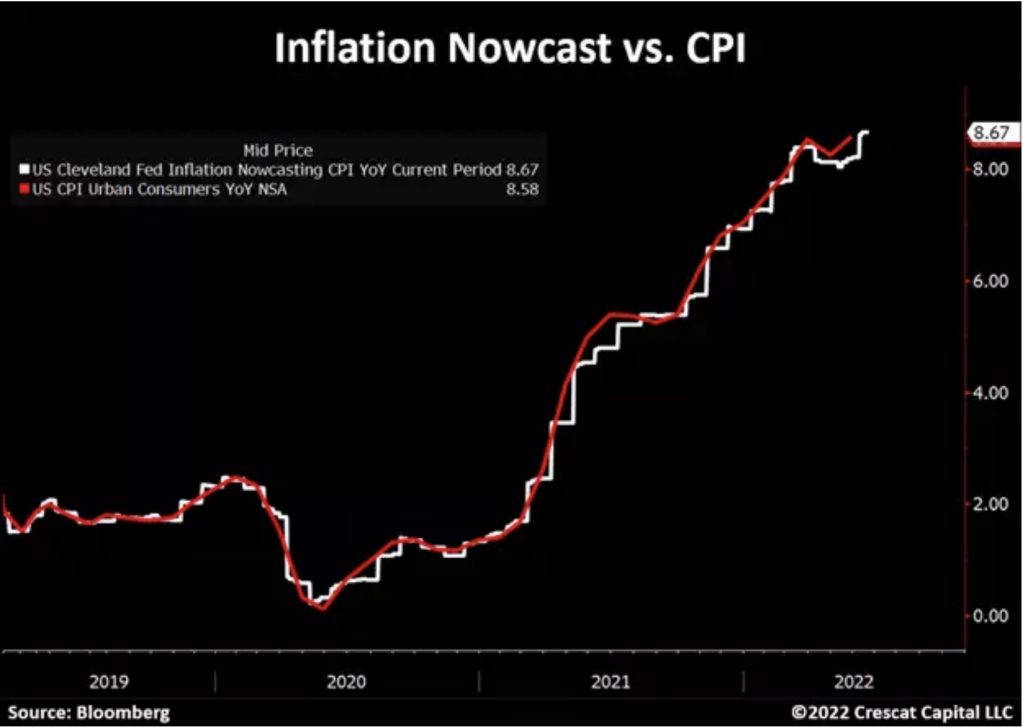 Commodities Bull Market
While the current hawkish stance by the Fed should create downward pressure on inflationary forces by reducing the availability of capital and credit in the economy it will only exacerbate the structural issues we face. As we have presented multiple times, the long-term capital spending among natural resource industries is near historical lows. We strongly believe that until this imbalance gets resolved, the supply of raw materials will remain severely constrained. CAPEX trends take a long time to reverse, and this issue should continue to fuel commodity prices to increase over time. 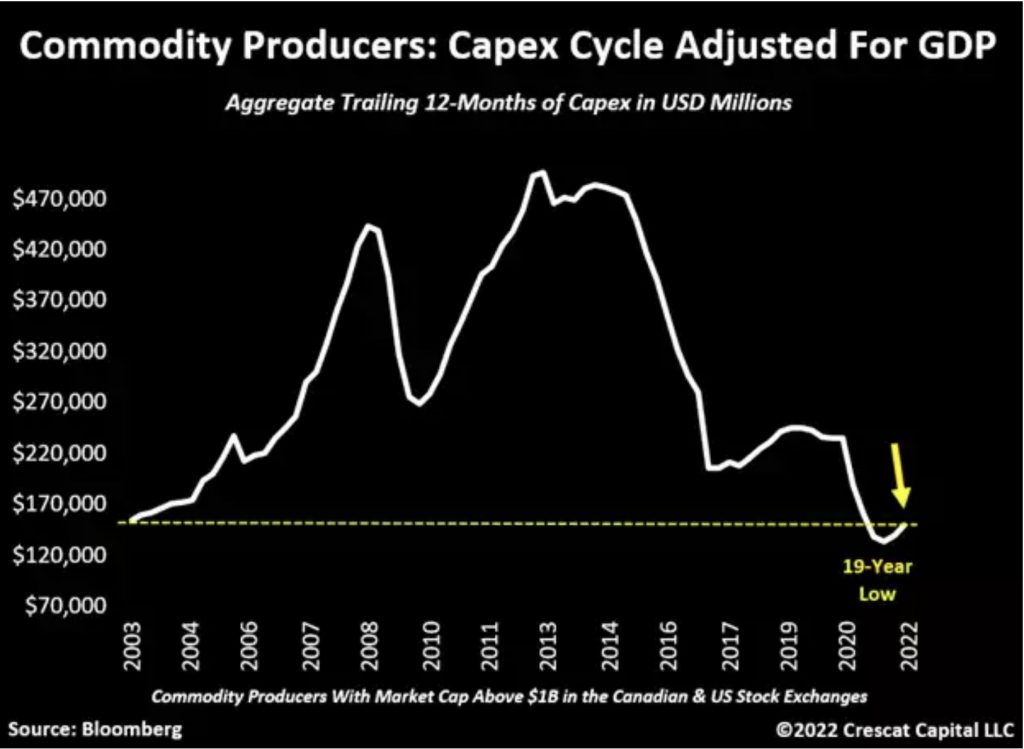 Gold Holding Up
It is very impressive how gold has been holding up despite the bloodbath in global sovereign bonds. Wait until something really breaks in the economy and the Fed is forced to reverse its policy in an already inflationary environment. 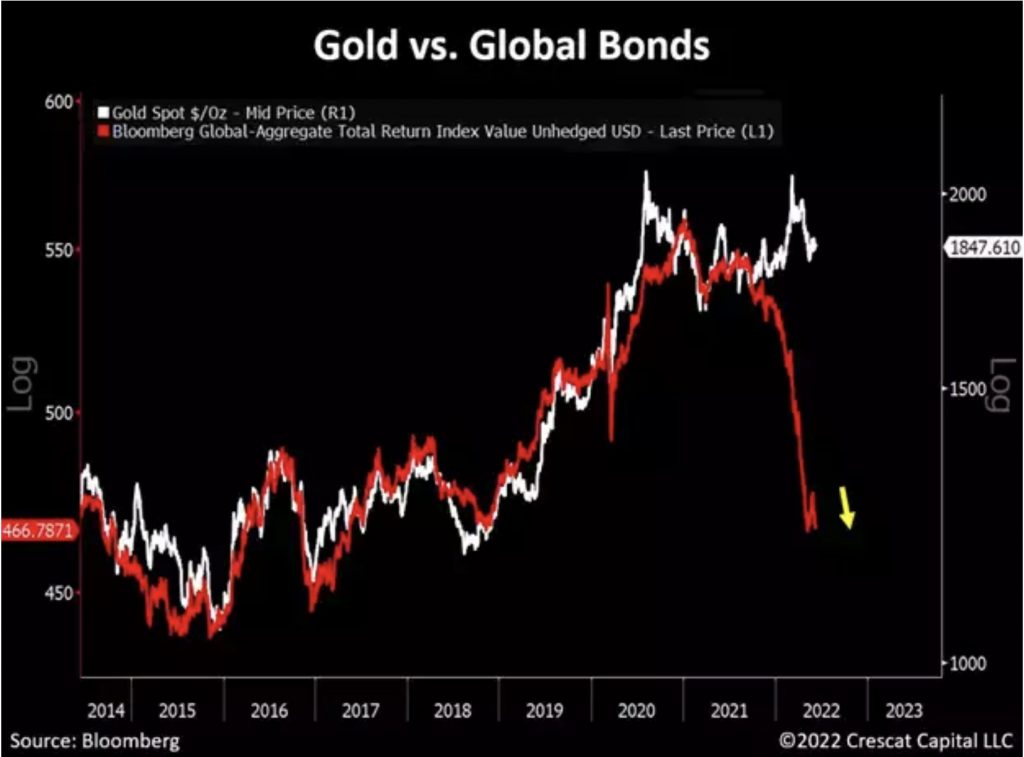 Gold and Commodities Appreciated Since CPI Went Above 2%
Despite the recent pessimism towards precious metals, since the Consumer Price Index went above the Fed’s 2% annualized growth target, gold and commodities were one of the few assets to perform positively in this new macro environment. Note the striking difference with other risk assets that were supposed to benefit from an inflationary regime. Bitcoin, often touted as the “fastest horse” in this environment, is now down over 60% during that period. Similarly, Nasdaq declined almost 18% and is down over 30% since the bear market began. 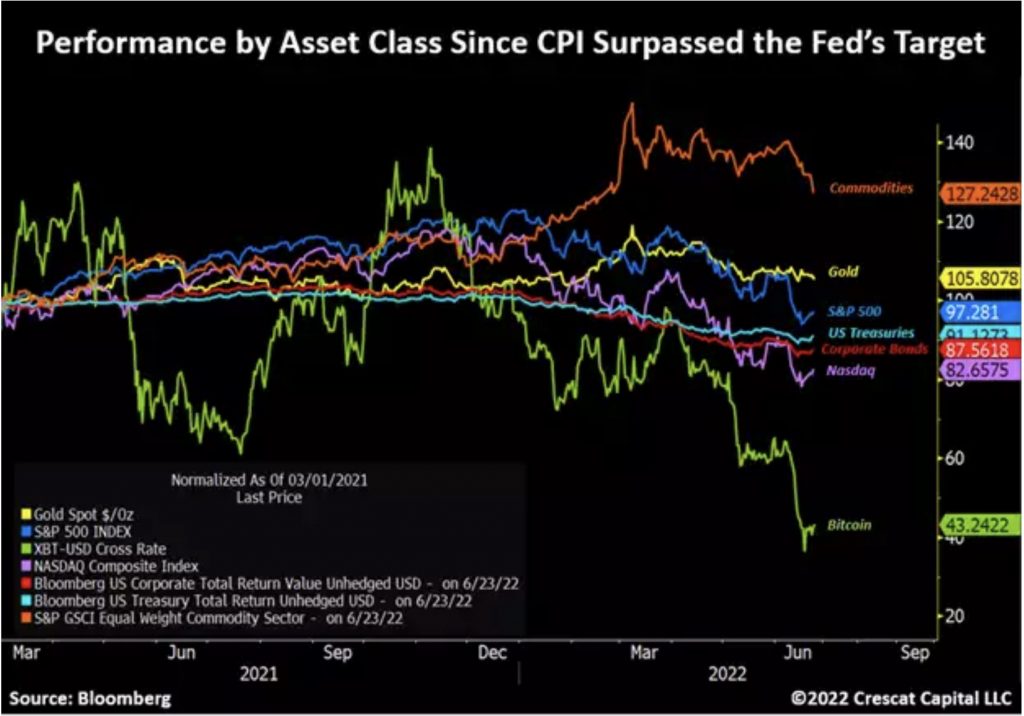 “Safe Haven”
Watch closely what is happening with Japan. It is a highly indebted economy now being forced to loosen monetary conditions in an already inflationary environment. By purchasing unlimited amounts of 10-year Japanese government bonds, the yen has been in freefall relative to the US dollar. Interestingly, the Japanese currency used to be perceived as a safe-haven monetary asset by investors. Note the major divergence in performance between the yen and gold over the years. Japan is facing a true monetary crisis and may soon be forced to abandon its yield curve control, at least temporarily, to stem its currency collapse. 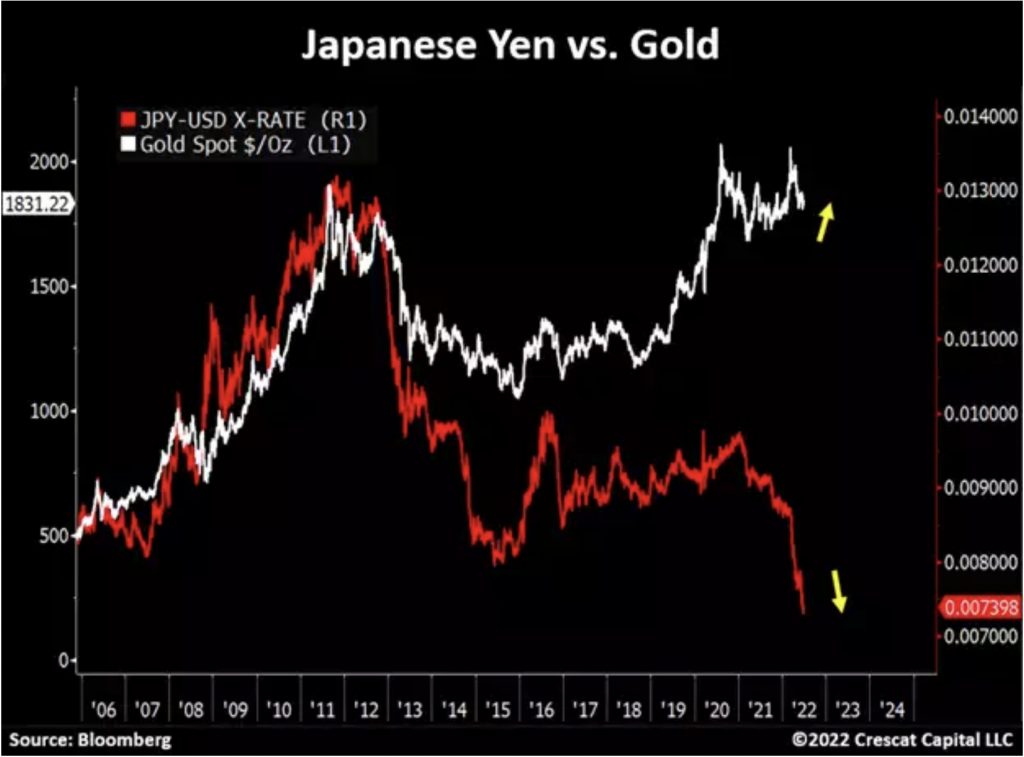 Synchronized Real Growth Contraction
The global economy is interconnected and cannot sustain this level of monetary tightening from developed economies to fight inflation without something cracking. Argentina is a great example. Its sovereign credit default swaps just surged to all-time highs. There are more knock-on effects like this to come before financial conditions ease. 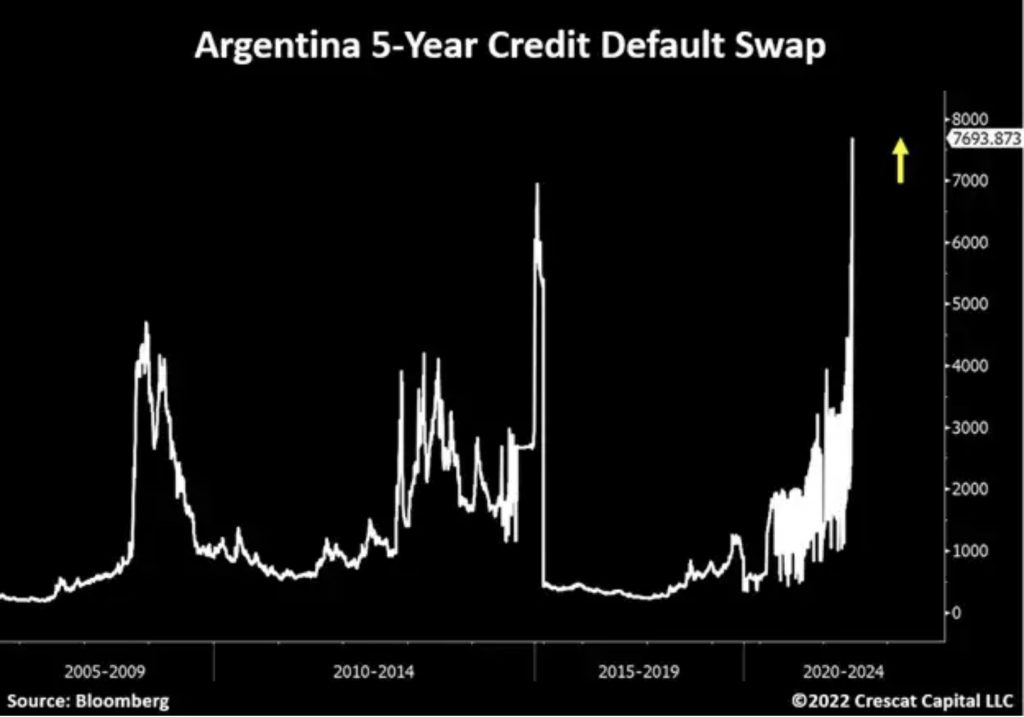 Labor Unionization in Early Innings
As the cost of living rises and workers begin to demand higher wages, we are likely to see a significant pick up of employees joining labor unions. As shown in the chart below, this number was significantly higher decades ago. This will be a critical change socially and economically as we are also likely to see more labor strikes organized by these unions. The years following the Spanish Flu in 1919 and the decade of the 1970s were great analogs. 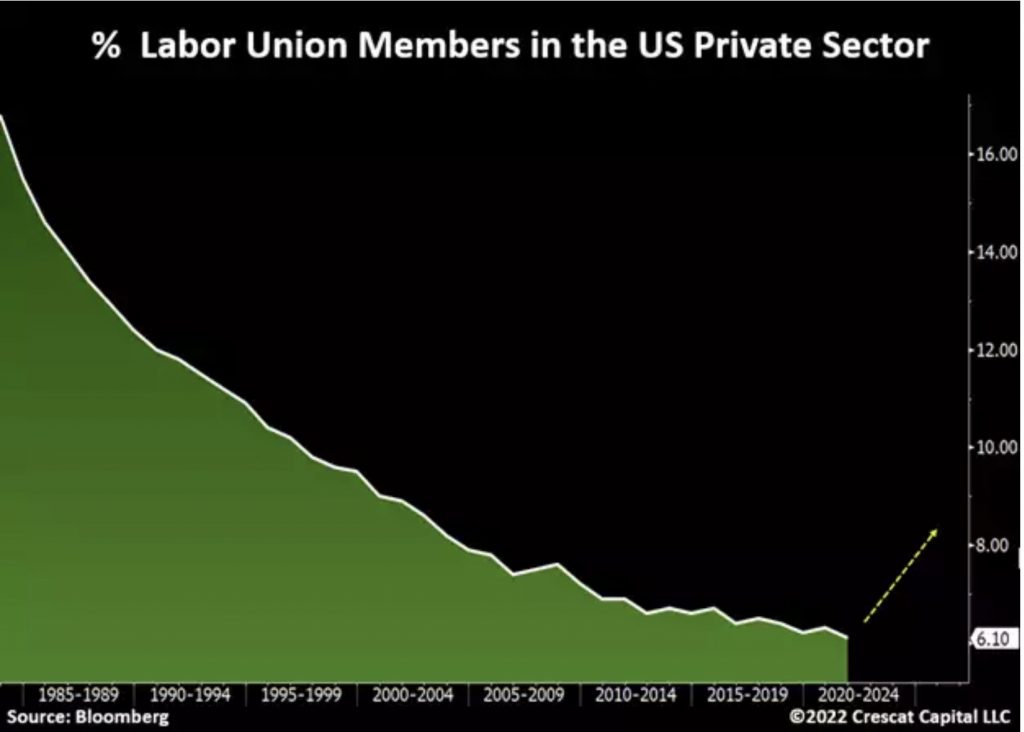 A Deep Value and High Growth Opportunity
General investor sentiment toward precious metals has become far too negative recently and is wholly unwarranted given the supply-driven inflationary environment. Gold and silver are typically safe havens for such times and should soon prove so again. We think the market environment is creating an excellent entry point for smart capital to get into Crescat’s funds now. This month, we are seeing a substantial inflow commitment into our combined hedge funds. This is mostly from current investors who see the opportunity this pullback has created and have decided to increase their position.

Hockey fever is at an all-time high here in Denver with the Avalanche winning the Stanley Cup. At Crescat, we have recently referred to the Great One’s father’s famous quote, “Skate to where the puck is going, not where it has been”. It might be an overused cliché, but we think it perfectly represents current investor sentiment. Most investors think buying the dip in overvalued tech stocks is the best investment thesis right now because that is where the metaphorical puck has been for the last several years. We think it is going in a different direction. That’s why our funds are positioned in the deep value and high growth opportunities of the new macro cycle. For investors who have the same mentality, now is a tactically-superior time to add to your investments in any of our strategies, particularly the Precious Metals Hedge Fund, given the unusually-favorable risk/reward dynamics in our favor.