Is this why the gold market is trading higher today and closing in on a breakout?

“Although there is no explicit reason why a commodity bear market bottom should coincide with a speculative stock market top, the fact remains that it happened twice before, and history suggests it’s about to happen again— another data point suggesting that today’s commodity bear market is rapidly drawing to a close.” — Leigh Goehring & Adam Rozencwajg 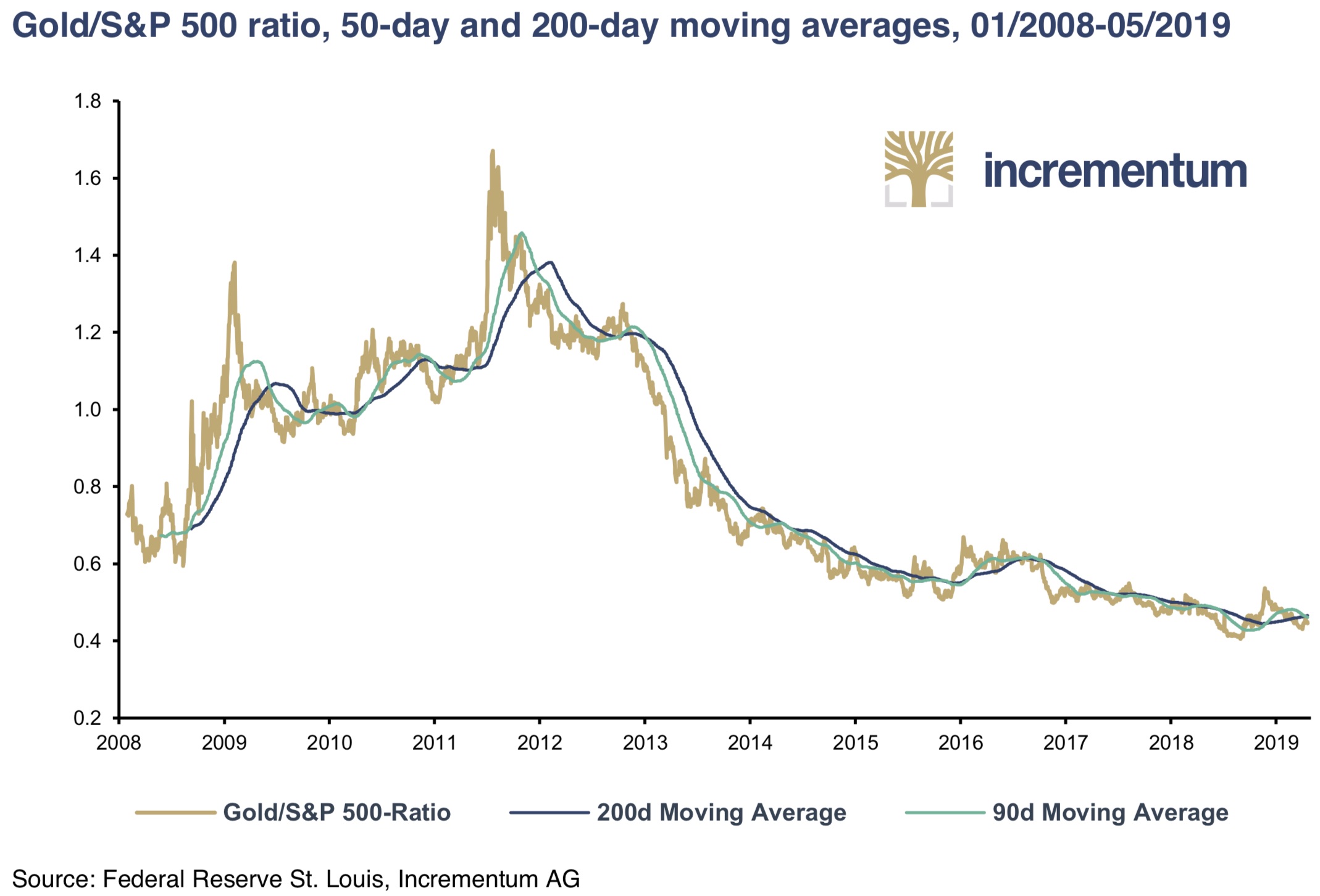 Now let’s take a look at the performance of gold relative to commodities. The following chart was by far the most cited one in last year’s In Gold We Trust report.51 It is an outstanding illustration of the fact that commodities have traded at an extremely favorable valuation relative to equities, historically. In relation to the S&P 500, the GSCI Commodity Index (TR) stands at 0.9 and thus significantly below the long-term median of 4.11 and light years away from its peaks. 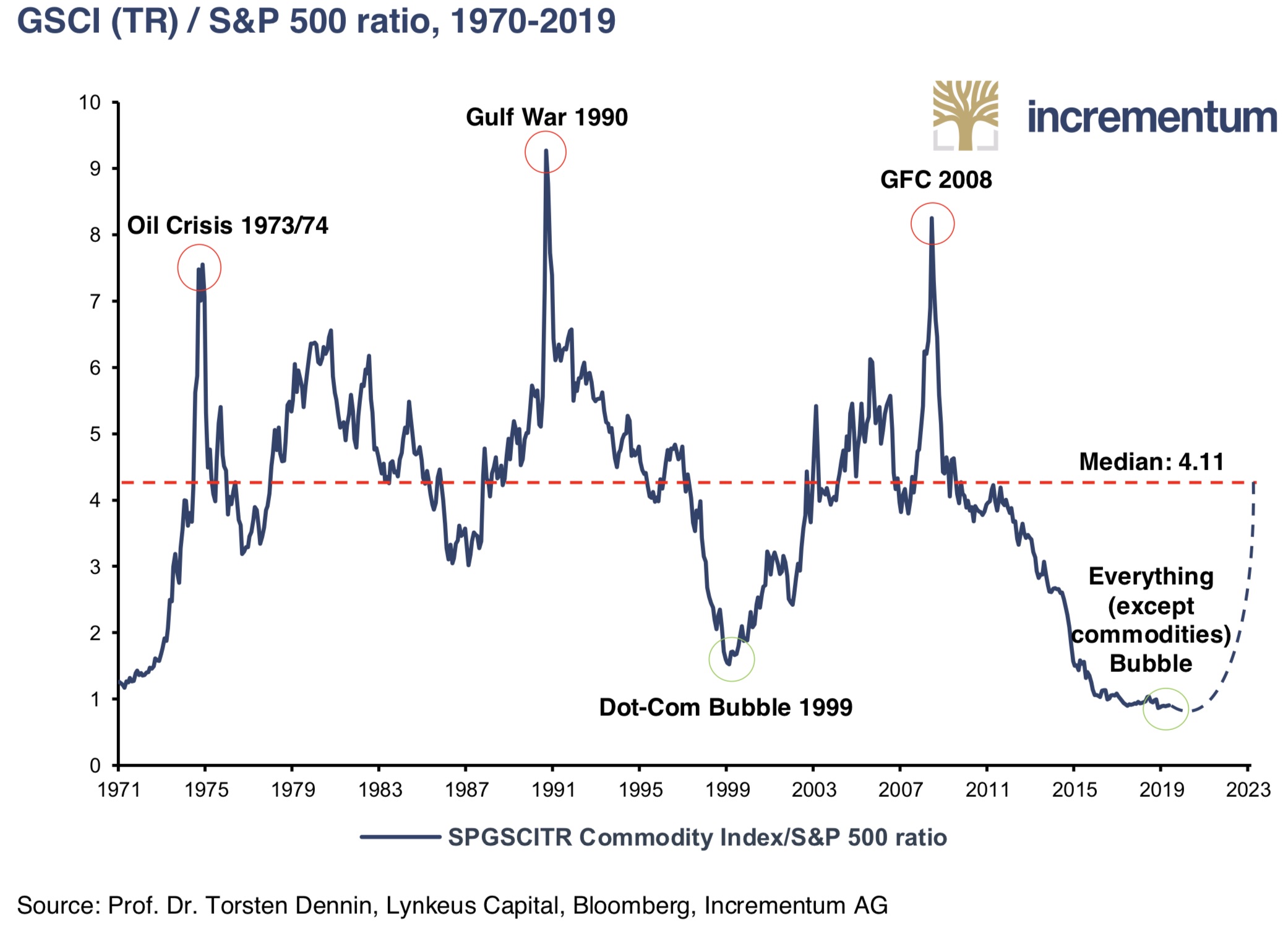 Commodities with lowest valuation in 100 years?
Now we want to take a view of the commodities sector over an even longer time span.52 The next chart shows that commodities are currently trading at their lowest level relative to US equities since the 1960s. Moreover, there were only two other occasions when commodities were similarly undervalued relative to equities: just ahead of Black Thursday on October 24, 1929, and during the excesses of the dotcom bubble. 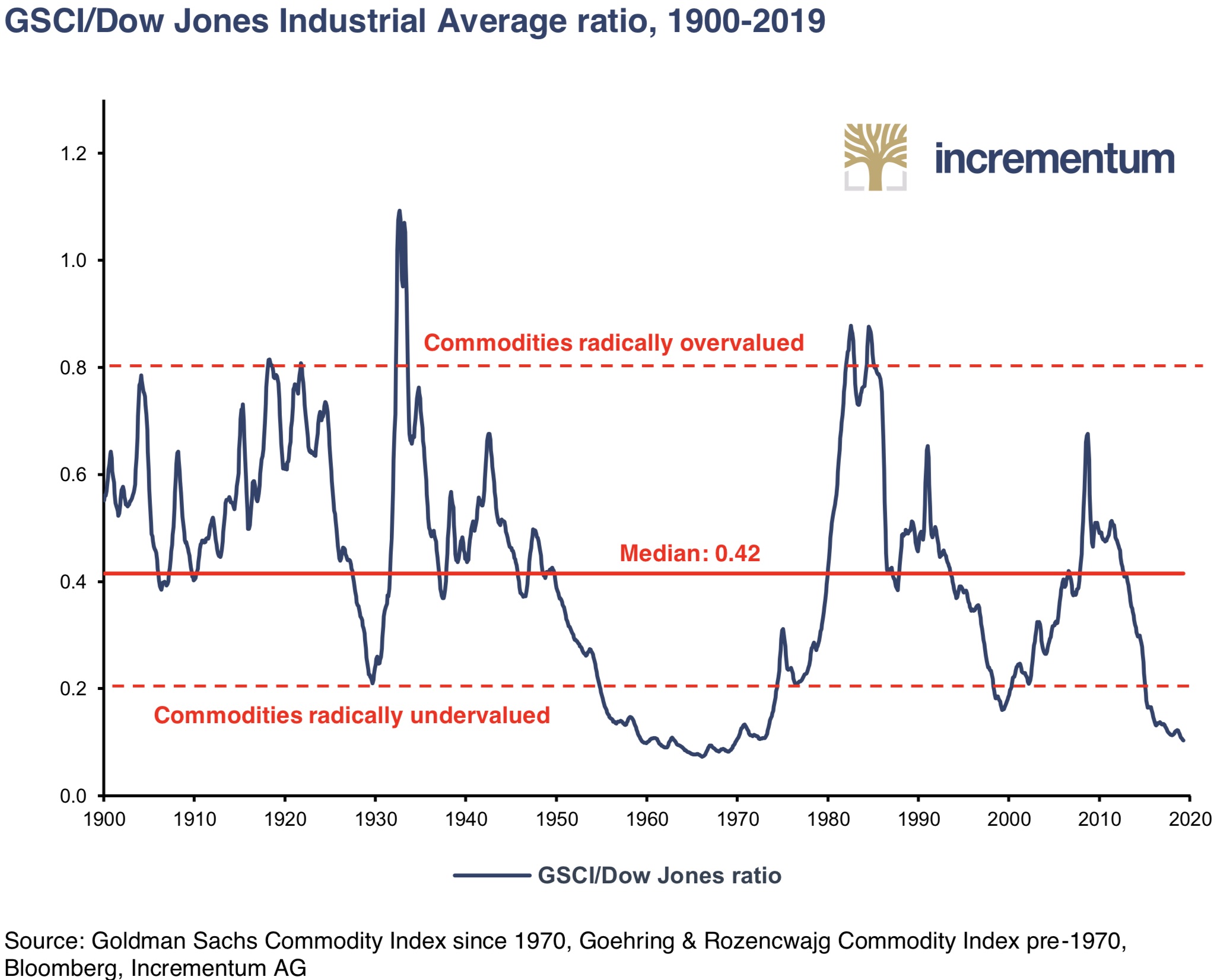 Remarkable Parallels
The parallels between the 1970s and 2000s on the one hand and today’s situation on the other hand are astounding. Each time, an expansionary monetary policy fed a period of booming stock markets. Subsequently, a decade of surging commodity prices set in. If the GSCI had been bought in 1970 and sold in 1980, an annualized return of 20% would have been achieved. The same applies to the phase from 2000 onwards, when commodities were particularly attractive as equities tended to move sideways…

IMPORTANT:
To learn which junior explorer is about to report what may be some of the best drill holes in the world CLICK HERE OR ON THE IMAGE BELOW

In recent years we have experienced the most expansive and experimental monetary policy in history, but it has only reached commodity markets peripherally.

It’s About Time
King World News note:  Stoeferle is correct that the comparisons today vs the 1970s and 2000s are astounding. And each of those time frames produced spectacular bull markets in gold and silver. We are now on the cusp of a massive launch in the metals and for many who have been waiting, it’s about time.

***Also just released ALERT: One Of The Greats Says There Is “Zero Chance” Of A Rate Cut Next Week CLICKING HERE OR ON THE IMAGE BELOW.

***Also just released: What Is About To Unfold Should Be Very Good News For Gold, Silver And Commodities CLICK HERE TO READ.