Inflation is soaring as supplies of groceries and other items disappear.

The FAO’s Food Price Index, combining costs of a variety of cereals, dairy products, meats, sugar, and vegetable oils, rose 1.2 percent to 130 in September, 32 percent above the index’s rating a year previous.

Only meat prices remained level during the month, the FAO said.

Food prices have climbed 27 percent in calendar 2020 to date, according to RT, the Russian news service, in a trend we have documented in “Food Companies Raise Retail Prices” (15 Jun 2021) and elsewhere.

“This is one of the most dynamic price increases since the ‘70s,” Ivan Fedyakov, CEO of the INFOLine research service, told RT.

“Prices are growing not only for fruits and vegetables or milk, but also for feed and fertilizers,” he noted. “This triggers a price spiral, and prices will continue to rise, but purchasing power is not unlimited.”

Fertilizer production relies on natural gas, the cost of which is soaring out of sight across the continent.

Most farmers rely on fertilizer to boost yields of staple commodity crops such as wheat and soy.

Meanwhile, major U.S. food companies are warning grocers that many staples will be available only in limited quantities, thanks to shortages of labor, materials, and adequate transport, CNN reported. 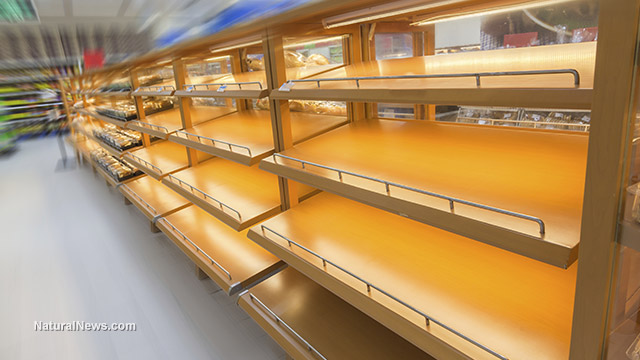 Scarce items will include McCormick gourmet spices, which have run out of glass bottles, Marie Callender’s pot pies, some Ben & Jerry’s ice cream flavors, and Rice Krispies Treats, according to messages from food companies CNN obtained.

Some suppliers also are telling retailers to cancel sale prices and promotions for these and other items in the weeks ahead so limited supplies can last longer.

Some suppliers are preparing for possible shortages of glass jars and packaging containers, CNN said.

During the week ending 3 October, 18 percent of beverages and bakery items, 16 percent of snacks, and 15 percent of candy and frozen foods were out of stock on the nation’s supermarket shelves, according to data from IRI, which tracks stock levels at major food retailers.

Before 2020, an average of 7 percent of items were out of stock, IRI noted.

Earlier this month, Kellogg told four grocery distributors that the volumes they receive of Pringles Snack Stacks, Eggo frozen pancakes, and Morningstar Farms plant-based hot dogs and bacon will be subject to limits.

Mondelez, which makes Oreo cookies, Philadelphia brand cream cheese, and Ritz crackers, among other foods, has warned at least one distributor of limited availability of some brands into at least January, due to labor and logistics “challenges.”

TREND FORECAST:
Ending food shortages is not as easy as just planting more crops or waiting for more delivery truck drivers to apply for jobs.

The growing frequency of floods, droughts, and other extreme weather events will continue to make farm yields unreliable, pressuring prices higher for the long-term future in wheat, corn, and other crops that make up the foundation of entire nations’ diets.

Therefore, inflationary pressures on food prices will persist even as supply chain difficulties are minimized. Indeed, should food production escalate, companies will not lower prices on packaged/canned goods or in fast food sectors…

The view that today’s high inflation rate is “transitory,” voiced by Fed officers and other central bank officials around the world, is based on the idea that high inflation rates are caused by supply bottlenecks, as we noted in “Fed Holds Firm on Policy Despite 5-Percent Inflation” (20 Jul 2021).

However, current inflation rates are being driven at least as much, if not more, by a long-term shortage of high-demand commodities from tin to computer chips, Prince pointed out.

“The Fed is in a box,” Prince said, “because tightening [Fed policies] won’t really do much to reduce inflation unless they do a lot of it because it’s supply-driven—and if they do a lot of it, it probably drives financial markets down, which they probably don’t want to do.

“It’s just not going to be that easy to resolve these supply constraints, especially as  COVID remains an issue,” he added.

The yield on 10-year treasury notes topped 1.6 percent Friday, a measure of the market’s view that inflation will remain strong for the foreseeable future, the FT noted. (See related story.)

In Germany, yields on some government bonds reached their highest since 2013; in the U.K., where the Bank of England (BoE) has said it could raise rates this year to combat inflation, some yields rose to levels not seen since 2008.

The BoE’s warning that rates could rise in the next three months was “a wake-up call to investors,” Prince said.

He compared today’s plight to the 1970s, when OPEC cut oil supplies to the West, sparking rampant inflation while stagnating the economy.

TRENDPOST:
Prince is right. Normally, inflation might be subject to control through a tweak to central bank policies.

However, these are not normal times.

Inflation has roots not only in record-low interest rates and buckets of cheap money sloshed out by Banksters.

Prices are being pushed higher by shortages of basic materials such as computer chips and copper in some cases. A persistent shortage of workers will continue to drive up wages.

Some prices will ease as supply-line disruptions untangle themselves; but central banks’ actions alone will not solve this round of worldwide surging prices.

TREND FORECAST:
In times like these, authoritarian governments such as China’s have the advantage of being able to command private corporations and state-owned enterprises to open a new mineral mine or build a new chip factory, for example.

That power will lead those countries to respond more quickly and effectively than private-enterprise economies of the West, which are likely to become even more dependent on production in Asia as a result.

Ryan McIntyre:  “Maverix now has 122 royalties and streams, with 14 currently paying. Our revenue is really starting to grow now. We’ve announced two acquisitions recently that will add approximately 30% to our current revenue base. So we are projecting pretty big growth. We have a great balance sheet with no net debt and we also put in place a larger credit facility a couple of months ago. So we have plenty of firepower that will allow for continued growth in acquisitions, revenue and cash flow on a go forward basis.

And as we continue to acquire more royalties and streams that will serve to further accelerate the tremendous growth we already have in our existing portfolio. Maverix has a hugely scalable business with tremendous leverage to metals prices and we fully expect that to be reflected in a much higher share price as the metals markets head higher. Maverix Metals, symbol MMX in Canada and the US.