Inflation Is Only Getting Worse, Take A Look At This…

Inflation worries are only getting worse, take a look at this…

Inflation Worries
November 16 (King World News) – Peter Boockvar:  Yesterday saw another sharp rise in inflation expectations as measured by the TIPS breakevens. The 5 yr jumped 7 bps to a fresh high of 3.19%. For perspective, since 2002 when this maturity was introduced, it has averaged 1.85%. 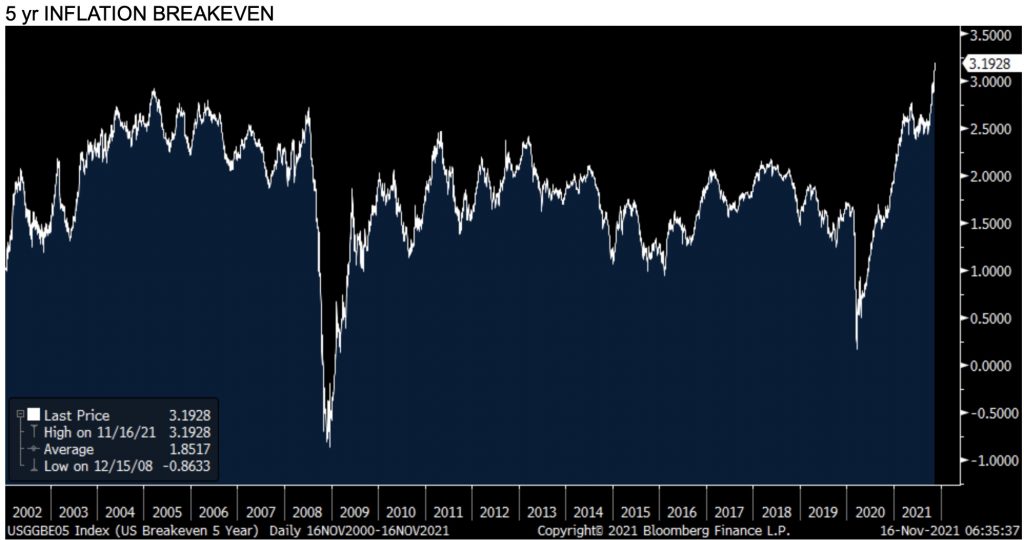 The 10 yr was up by 4 bps to 2.75% and that is just 3 bps from a record dating back to its beginning in 1998. It has averaged 1.99% since then. I do want to emphasize that every time I mention these stats is not to imply it is likely that these will be the inflation figures we will likely see in the coming years. It is just a snapshot of how market participants feel today about what is to come, aka inflation expectations. 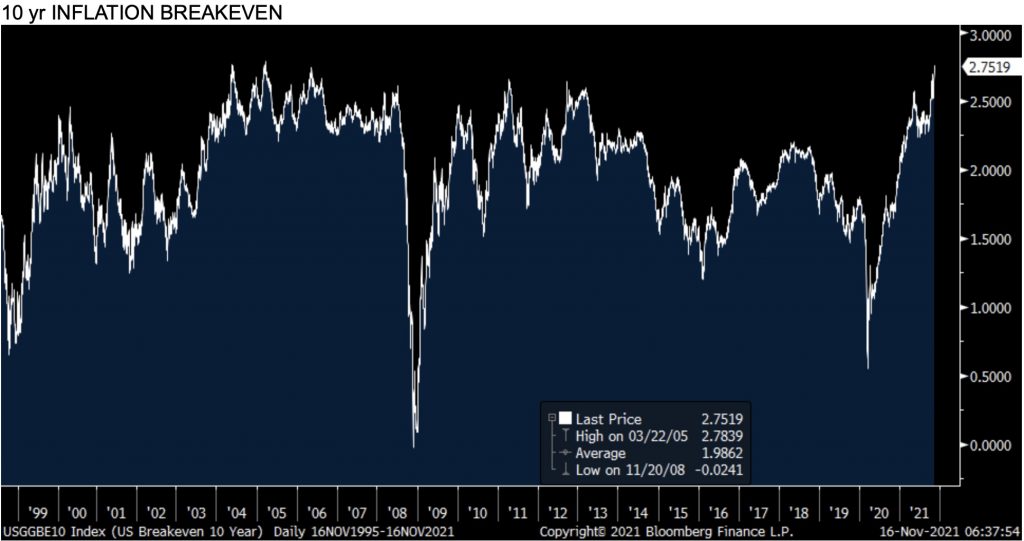 Natural Gas On The Move
European natural gas prices are jumping by 8% after a 9% rise yesterday and back to 3 week highs after the German government dragged their feet in approving Nord Stream 2 by temporarily suspending the process. The German 10 yr inflation breakeven is up 5 bps this week to also a 3 week high. 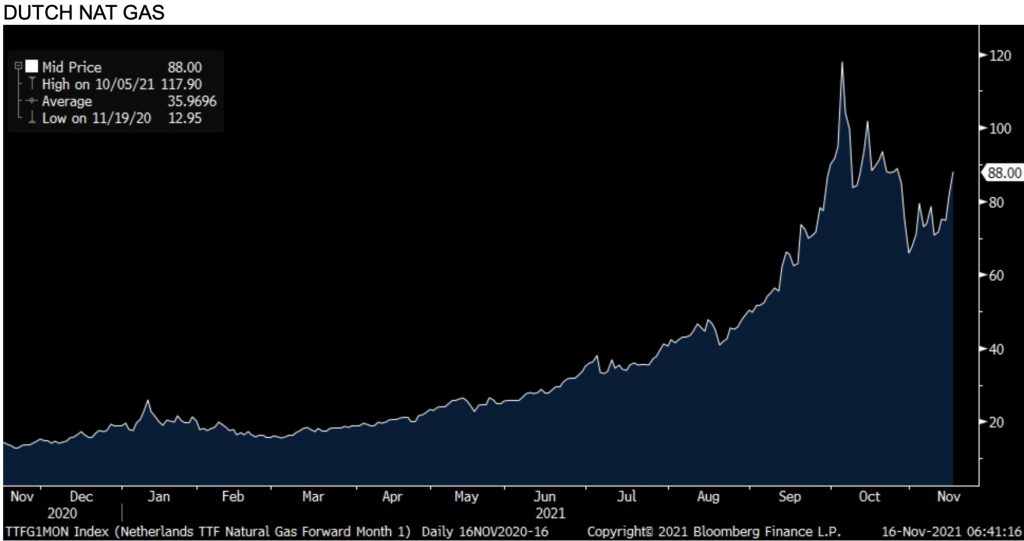 High Shipping Costs Continue
The Cass Freight Shipments index rose .8% y/o/y in October after a .6% increase in September. They said “Freight volumes remain capacity constrained, as shown by declining rail volumes and the ongoing backlog of containerships at anchor waiting to unload, but the 2.9% m/o/m improvement shows a modest rebound as restocking demand remained elevated. A pickup in automotive volumes likely also helped, as October rail carloadings in the motor vehicle category rose about 15% m/o/m.”

Also of note, Cass Freight infers what freight rates are by dividing its expenditures index by shipments. “The freight rates embedded in the two components of the Cass Freight Index were 36% higher y/o/y in October, accelerated from the 31% y/o/y increase in September, partly on easier comparison.” From September, prices were up 1.6%.

They said “Chassis production improved this month but remains far from what is needed to address rail network congestion, so West Coast imports continue onto truckload, considerably raising the length of haul in the largest freight market.” They said these “excess miles” are part of the 36% price rise but also “includes higher fuel surcharges, sharper increases in air cargo rates, and mix shifts between modes, with a smaller proportion of low cost intermodal and rail, and a larger proportion of relatively higher cost air and refrigerated truckload.” For the full year 2021, Cass said “if normal seasonality were to play out, this index would be up about 20% from 2020.”…

Hopefully of course many of the transportation stresses this year begin to smooth out in 2022 but keep in mind that companies that have experienced the cost shock will take the next few years in trying to recapture that lost profit margin. So just because transportation prices peak out, or even fall, as long as they remain well above where they were pre Covid, companies will continue to use this as a reason to take more price, aka, raise them.

Bank of England
As the Bank of England hems and haws on whether to hike interest rates, the UK September jobs figure revealed a gain of 247k in employment, well more than the estimate of 190k and the unemployment rate fell to 4.3% from 4.5% in the month prior and vs the forecast of 4.4%. The ONS said 160k jobs were created in October. September marked the end of the furlough scheme so this is a big deal and likely clinches a December rate hike. Wages ex bonuses rose 4.9% y/o/y thru September, about as expected and also reflecting a shortage of workers. The more timely jobless claims figure fell another 14.9k after a drop of 86k in September which was revised lower by a sharp 34k. After rising by 4 bps yesterday, the UK 2 yr yield is down 1 bp today. The pound is rallying as the BoE is running out of excuses not to hike but what we’ve learned from many central bankers is that even when they start to tighten, the process will be glacial.