As we move through the middle of the first trading week in October, if you want to know how crazy things really are right now, take a look at this…

By Peter Boockvar, author of the Boock Report
October 4 (King World News) – Here is what Peter Boockvar wrote as the world awaits the next round of monetary madness:  A day after the CNN Fear/Greed index closed the day at 92 (ranges from 0-100), Investors Intelligence said Bulls rose to 57.5 w/o/w to the most since early August and up from 54.3 last week. Its multi month low was 47.1 in September and was above 60 a few times this year. Most of the new Bulls came out of the Correction side as Bears were little changed at 17 from 17.1. The spread between Bulls and Bears is the biggest since early August. This also comes after the 20 yr high in one measure of an overbought condition called RSI in the Russell 2000 at 96 over the past 7 days (also between 0-100). Bottom line, what we’ve seen this year was the sentiment set up for a market rally was when Bulls were around 50 and stocks stalled out and consolidated when Bulls were around 60…

Ahead of the ADP jobs data which of course will be highly influenced by the hurricanes aftermath and the ISM services index, we know the auto data for September saw big upside. A combination of vehicle replacement of those that got wrecked in the storms (I saw an estimate that 600,000 will need to be replaced in Texas and Florida) and the highest incentive month on record with an average of $4,048 per vehicle enticement said JD Power. The head of sales at Ford said 25% of its growth in September was due to sales in the metro Houston area.

Notwithstanding the strong auto sales which came after seeing the better ISM manufacturing number on Monday (although Markit did not confirm), and of course in the midst of tax cut euphoria in the stock market, the US 2s/10s spread sits at just 85 bps. It was at 136 at the end of last year soon after the election. Let’s be honest here people, the US economy is still pretty mixed. Positively, the capital spending numbers have improved and exports have been good but US consumer spending remains mediocre, the housing data has been really so-so lately, commercial real estate is softening, C&I loans are up just 2.2% y/o/y  and the auto strength is just hurricane related. Lastly, look at this chart from the monthly Philadelphia Fed State Coincident Indicator reported on Monday that measures at the state level for all 50 states nonfarm payroll employment, average hours worked in manufacturing by production workers, the unemployment rate, and wage and salary disbursements deflated by CPI and all are wrapped up in some model. It is a diffusion index: 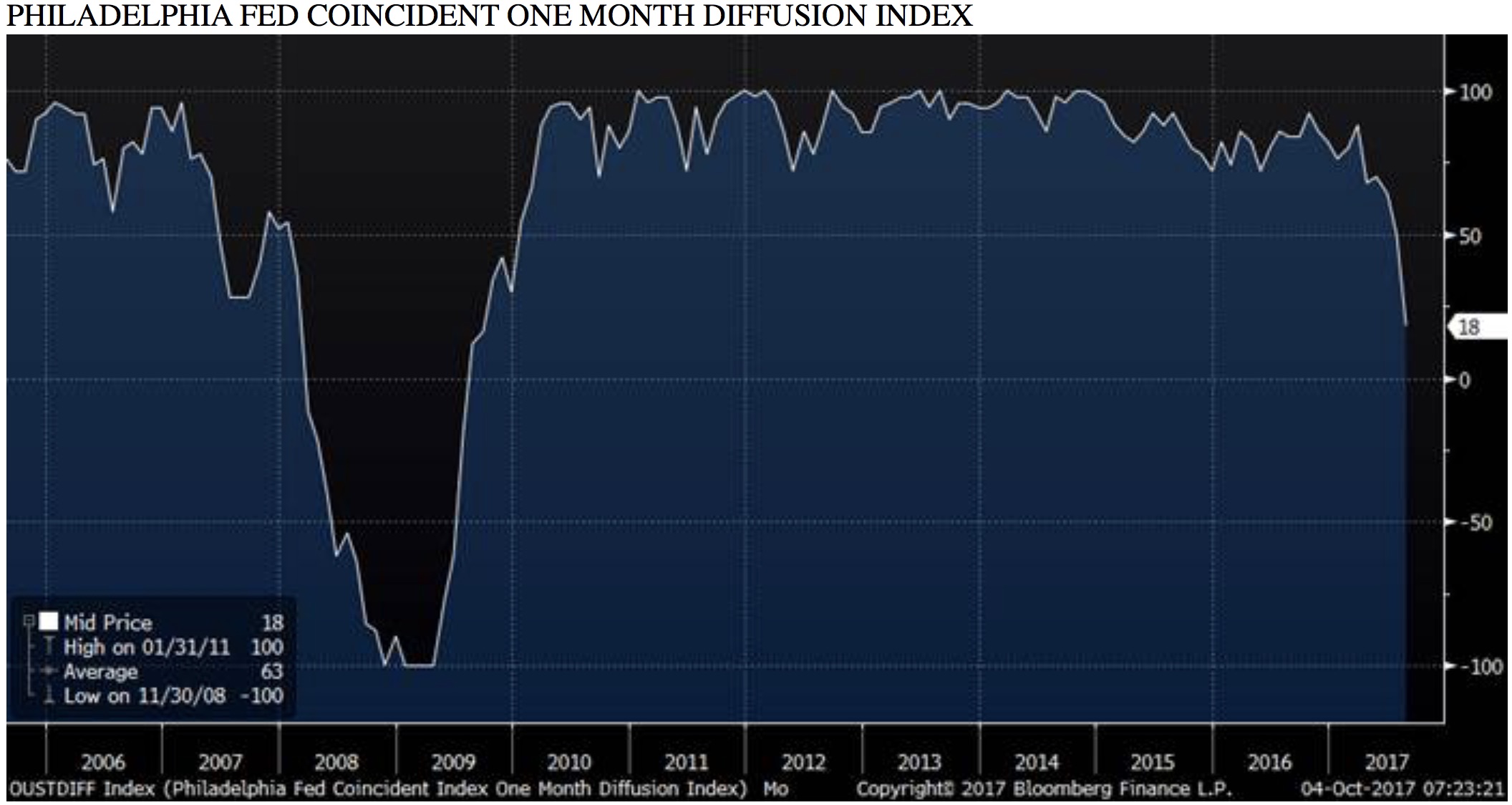 The MBA said mortgage applications to buy a home rose 1% w/o/w and are up 4.7% y/o/y. We know all the issues, challenges and opportunities in the housing market so I won’t restate them all here but just to repeat the most important being pricing (record highs), inventories and the low ratio of purchases by first time households (mostly millennials). Refi applications though fell 1.8% w/o/w, down for a 3rd straight week and lower by 25.3% y/o/y. This y/o/y number is getting smaller as we recycle thru the tough comparisons. The average 30 yr mortgage rate is near a 2 month high at 4.12%.

In an interesting admission, Stanley Fischer in an interview this morning on Bloomberg said “low rates have been less successful than we expected.” I’m tempted to respond here but I’ll control myself.  Mr. Fischer is retiring next week so won’t be voting in December but he said “I still believe we will have higher inflation. The basic mechanism here is unemployment is declining all the time, wages will start going up at some stage.” 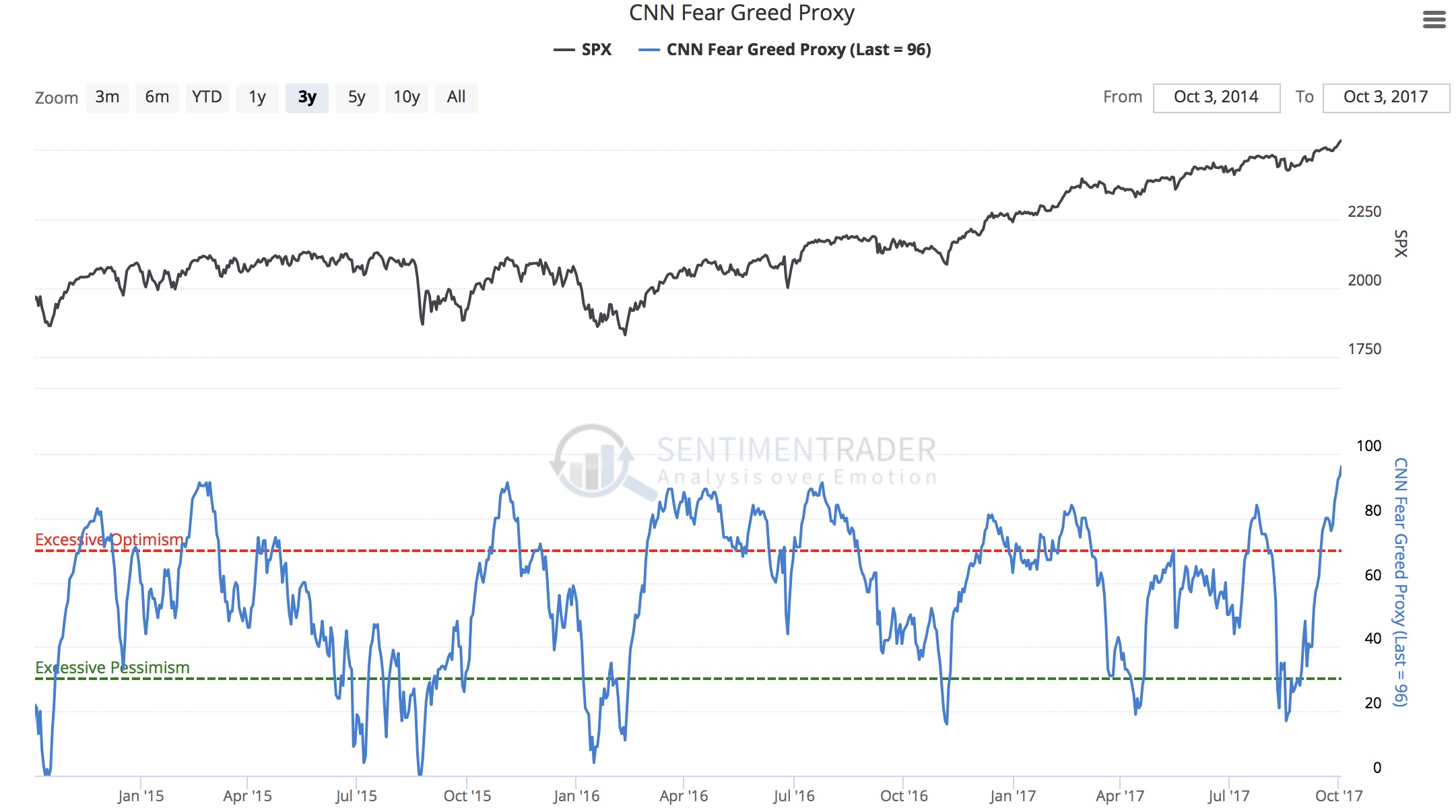