If history repeats, the price of gold look like it will triple from current levels.

July 2 (King World News) – Alasdair Macleod:  In declining volumes, this week gold and silver drifted sideways in the dying days of June. This morning in European trade gold was at $1783, up $3 from last Friday’s close, and silver at $26.11, up ten cents. 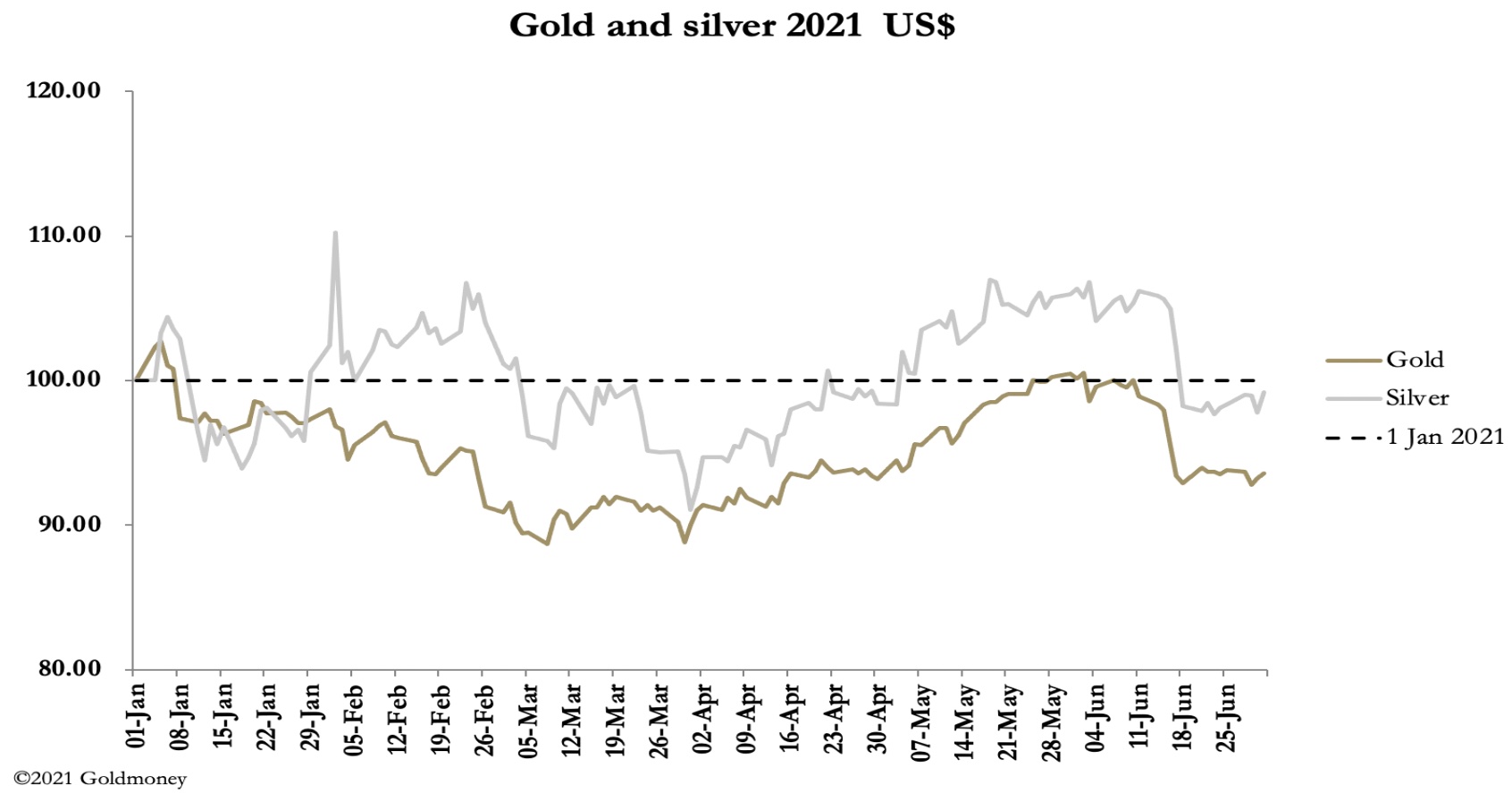 With the expiry of gold’s July Comex options, half-year mark-to-market accounting and the introduction of the Basel 3 net stable funding ratio for European and American banks, there has been much to chew on, contributing to investment apathy.

Those influences are now baked in the cake. The greatest unknowns are the long-term effects on market liquidity, assuming bullion bank traders reduce or eliminate their positions, and the timescale they take to do so. The Swaps category on Comex are still short. Their position, net short 167, 085 contracts on 15 June, is shown in our next chart. 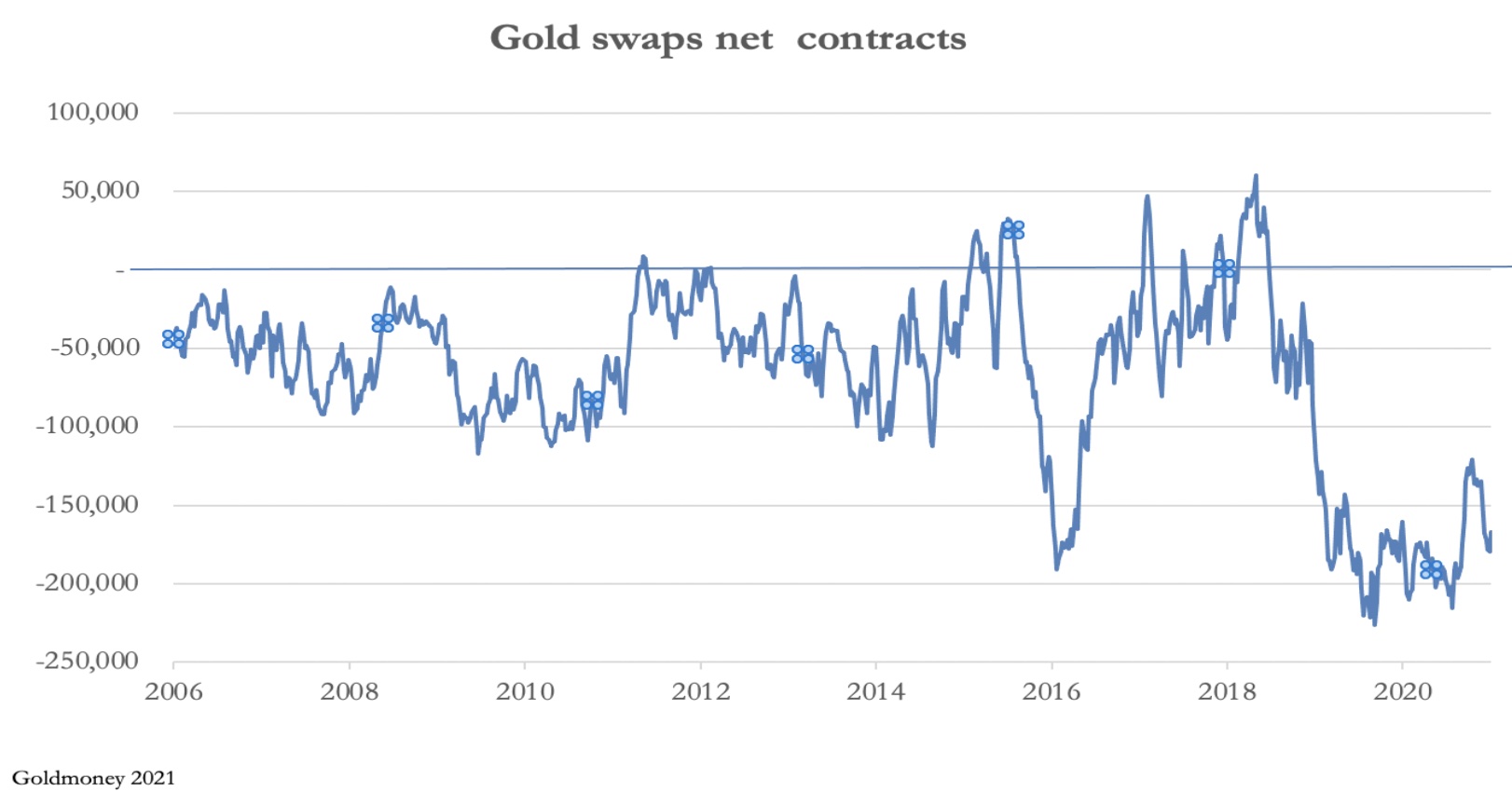 The Swaps category includes bullion bank traders who also take positions in London. But for some time, physical liquidity, which is traditionally hedged on Comex, has been limited. Therefore, hedging of London forwards should probably be less that 50,000 Comex contracts. That leaves about 120,000 shorts that should be closed in a market that is already illiquid and attempts to do so have manifestly failed.

There are two possibilities that could come to the Swaps rescue, allowing them to close short positions. The first is an early rise in US interest rates, becoming increasingly likely due to price inflation proving to be “intransient”. But there are problems with this theory. The Fed is more likely to resist raising rates before being forced to do so. In that event, the gold price is likely to rally ahead of a rise in interest rates, and even then, if the increase in the Fed funds rate fails to take expectations of a further increase out of the market, gold will go higher still…

A further problem with rising interest rates is investor ignorance about the relationship between higher interest rates and the gold price. Hedge funds could take a short-term bet on the dollar, whose trade weighted index has already begun to rise, by going short of gold futures to do so.

The second possibility is that rising interest rates, forced on the Fed by a weakening dollar, will undermine equity and bond markets. Equities are in a bubble, as our next chart of leveraged bull positions clearly shows. 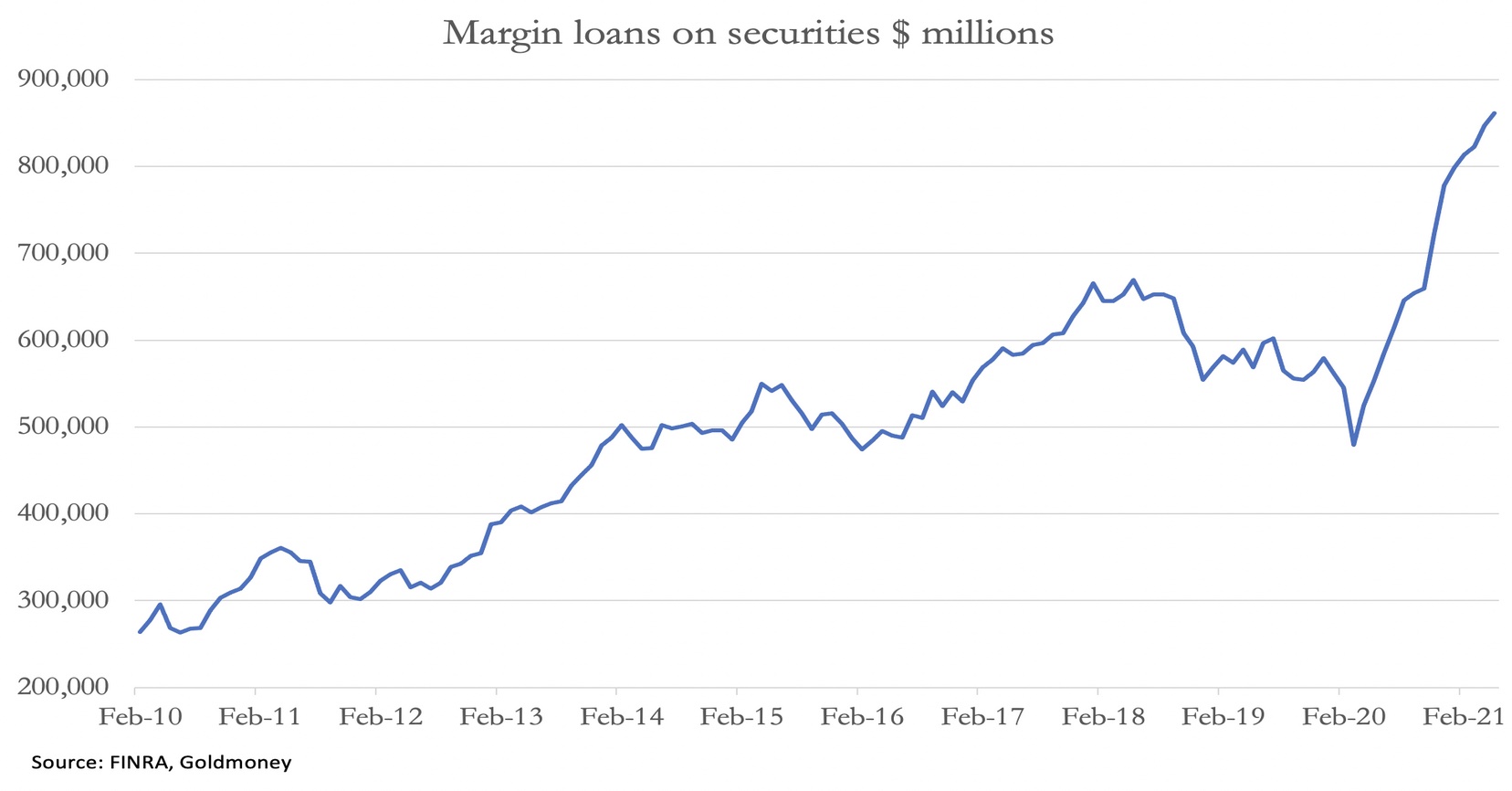 If History Repeats Gold Price To Triple
At $861 billion, the unwinding of this super-bullishness is likely to trigger a widespread liquidation. History shows that when an event of this sort happens, gold is initially sold or marked down in the scramble for liquidity. During and following the Lehman crisis, gold initially fell 34% before nearly tripling to $1920.

It is impossible to assess the likelihood and extent to which these two possibilities might affect the gold price. But it is sensible to bear in mind, that despite the clear trend into dollar hyperinflation, the effect on the gold price might prove unexpected at times in the second half of 2021.

Richard Russell – Buy Physical Silver Ahead Of The Coming Chaos

Behaving Like An Ass Indicator Flashing Again, Plus Most Bullish Macro Set Up For Gold & Silver In Over 50 Years!