Here is the big picture for gold in an inflationary world.

The primary trend is a law unto itself. It will continue until it dies of exhaustion. — Richard Russell

As before, the average performance in this secular bull market remains impressive. The average annual performance from 2000 to 2022 is 9.2%. During this period, gold has outperformed virtually every other asset class and, above all, every other currency – despite significant corrections in the meantime. Since the beginning of 2022 the development has been clearly positive, with an average gain of 5.4%. 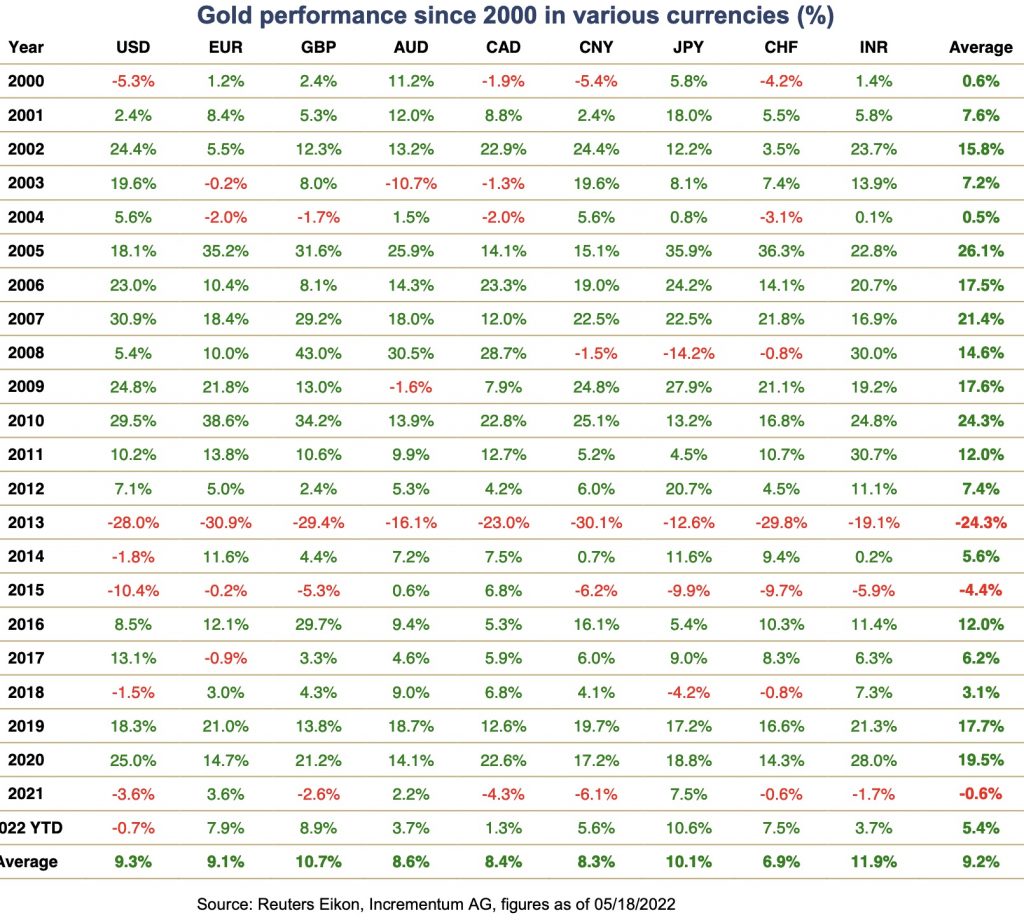 Let’s now take a look at the gold price development since the last In Gold We Trust report in US dollars and euros. Shortly after the publication of the last report on May 27, 2021, a consolidation phase of several months set in, which only ended at the beginning of 2022. In addition to profit-taking, a significantly firmer US dollar, and opportunity costs in the wake of the Bitcoin bull market, rising bond yields were a major trigger for the emerging headwind. 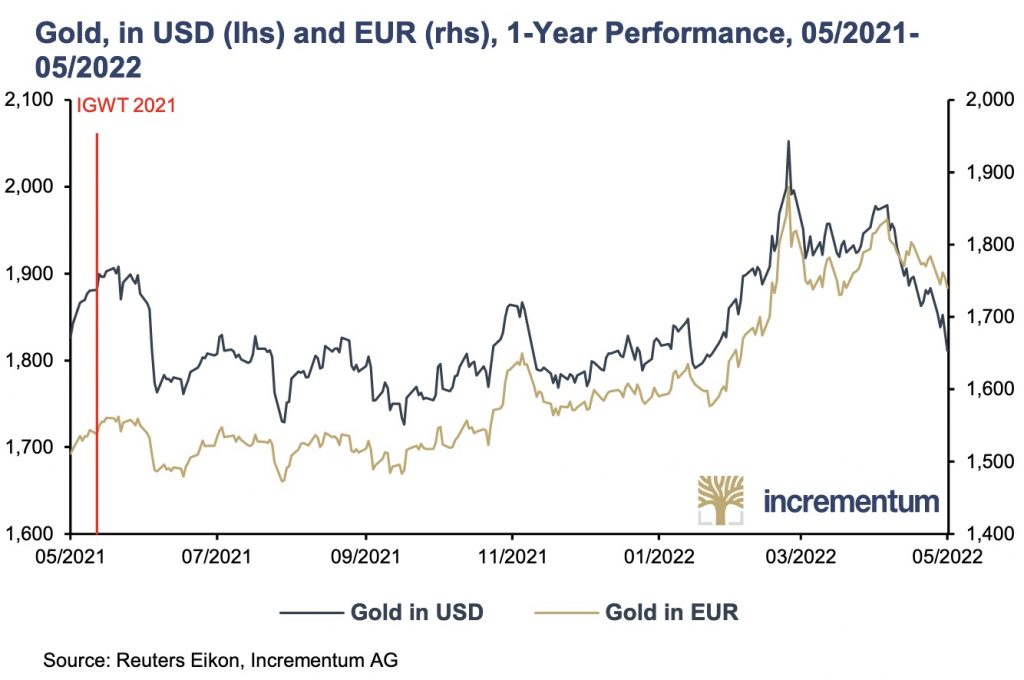 Let’s now flip back even further in the history books. Since the IPO of gold on August 15, 1971, the average annual growth rate of the gold price in US dollars amounts to 10.1%. The annualized growth rate (CAGR) is 7.9%. In the previous year, gold reached an annual average price of USD 1,799, a new all-time high. Since the beginning of the year, the average gold price has been USD 1,890. 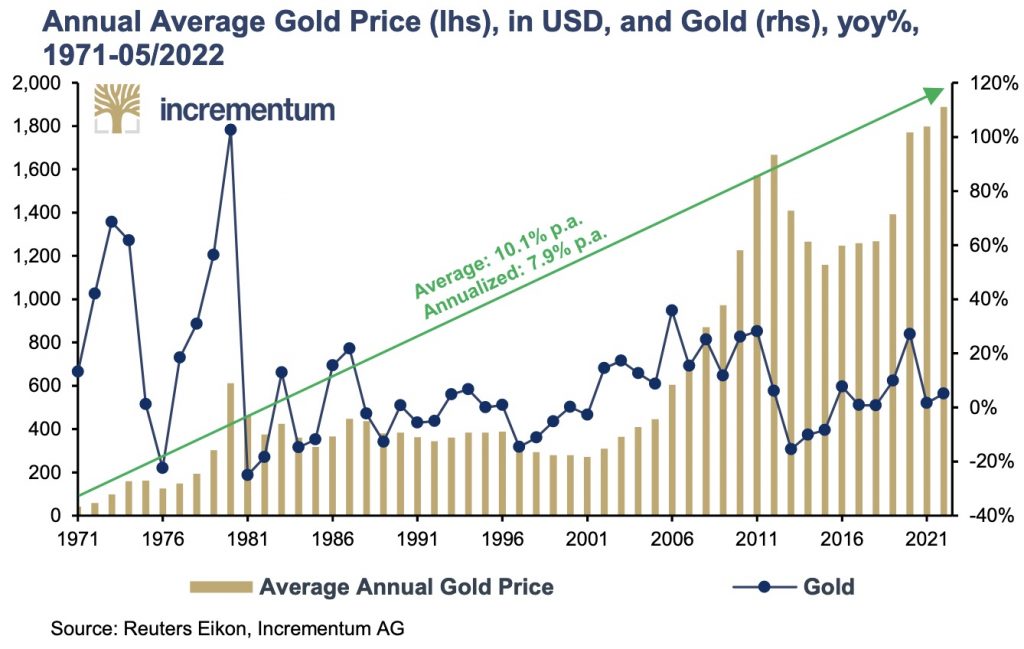 Let us now turn back to the more current “big picture”. The world gold price, which represents the gold price in the trade-weighted external value of the US dollar, recently reached new all-time highs again. Here, too, it seems that the long-term upward trend is clearly intact. 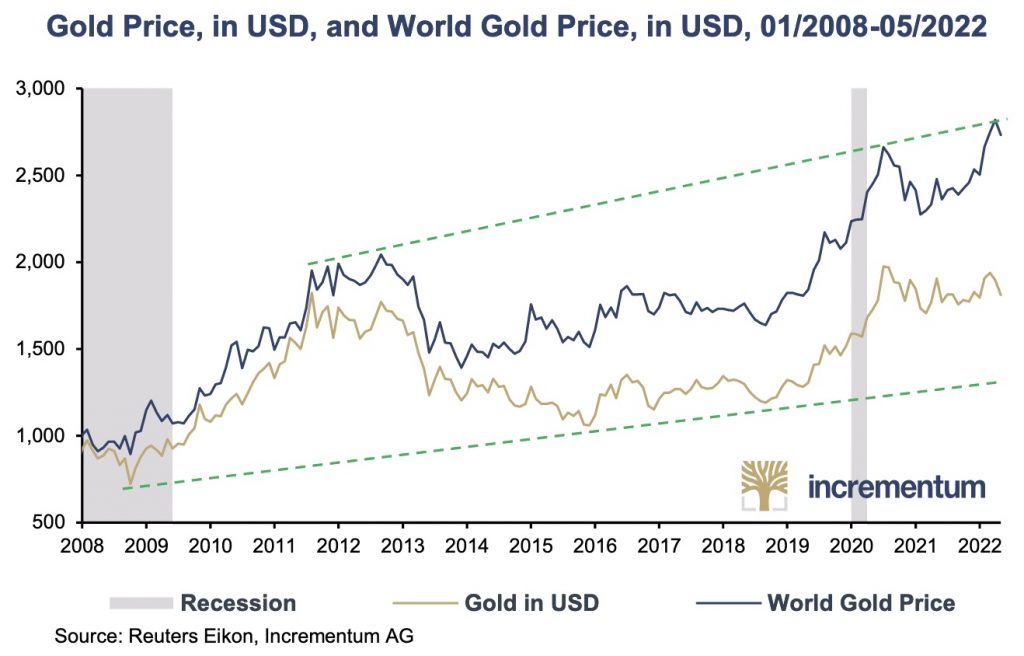 Thus, gold may rise in US dollars during a crisis but much less in Swiss francs, because the Swiss franc, as a classic safe-haven currency, appreciates against the US dollar and thus retains some of the gains that gold makes in US dollars. For investors from Switzerland, it might therefore be advisable to own gold hedged in Swiss francs in order to also fully benefit from gold’s safe-haven properties. For a euro investor, on the other hand, there is no need to hedge gold investments, in our opinion, as the euro tends to weaken in stress and crisis scenarios.

In a study worth reading, Prof. Dirk Baur of the University of Western Australia analyzed the correlation of gold with the local stock market in 68 countries. For this purpose, he applied the gold price in US dollars and the gold price in the respective local currency. The table below shows the correlations between the local stock markets and the gold price in local currency. Note that Venezuela has the highest positive correlation. This is certainly due to hyperinflation in Venezuela, which led to a devaluation of the Venezuelan Bolivar and thus a significant appreciation of gold. Stocks rise sharply in times of hyperinflation, not because companies are doing so well, but because there is a flight to real assets. 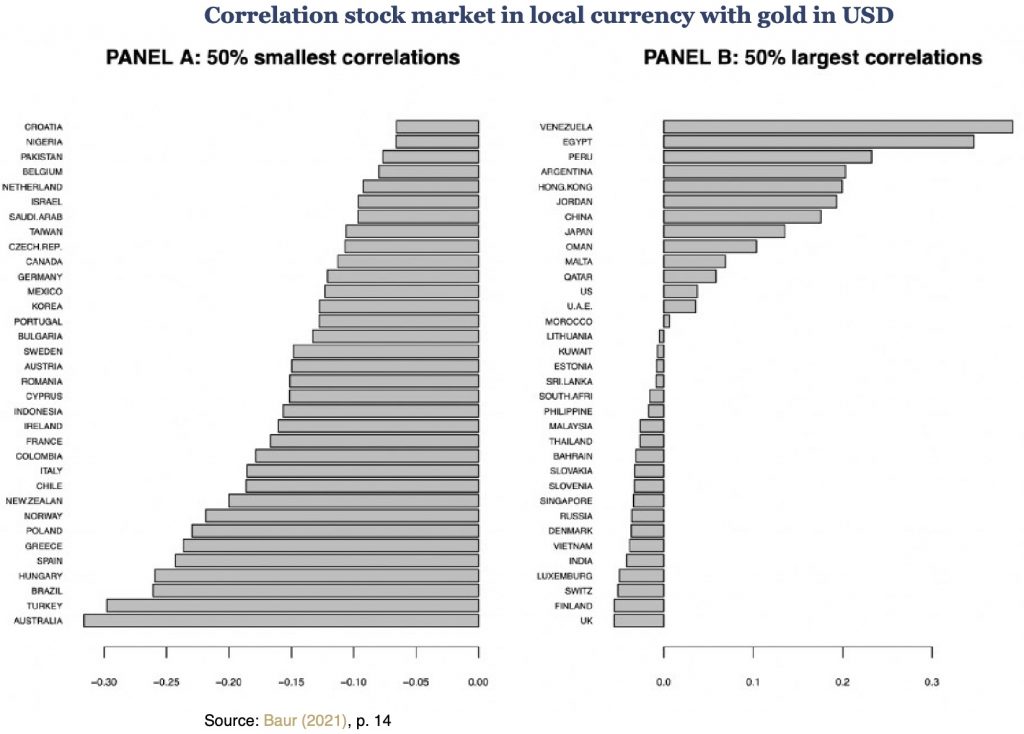 Conclusion
Our assessment of the previous year, according to which gold is in a new bull market, has proved accurate. Even though the gold price performed weaker than expected in the past weeks, the broad, long- term upward trend still seems to be intact. A look at the Sprott Gold Bullion Sentiment Index shows that sentiment had reached an absolute low in March 2021. The indicator had fallen even beyond the second standard deviation in the short term. Since then, the index and the gold price have recovered but are still far from the euphoric levels that prevailed in August 2020, for example. In this respect, the basis for further price increases seems excellent. 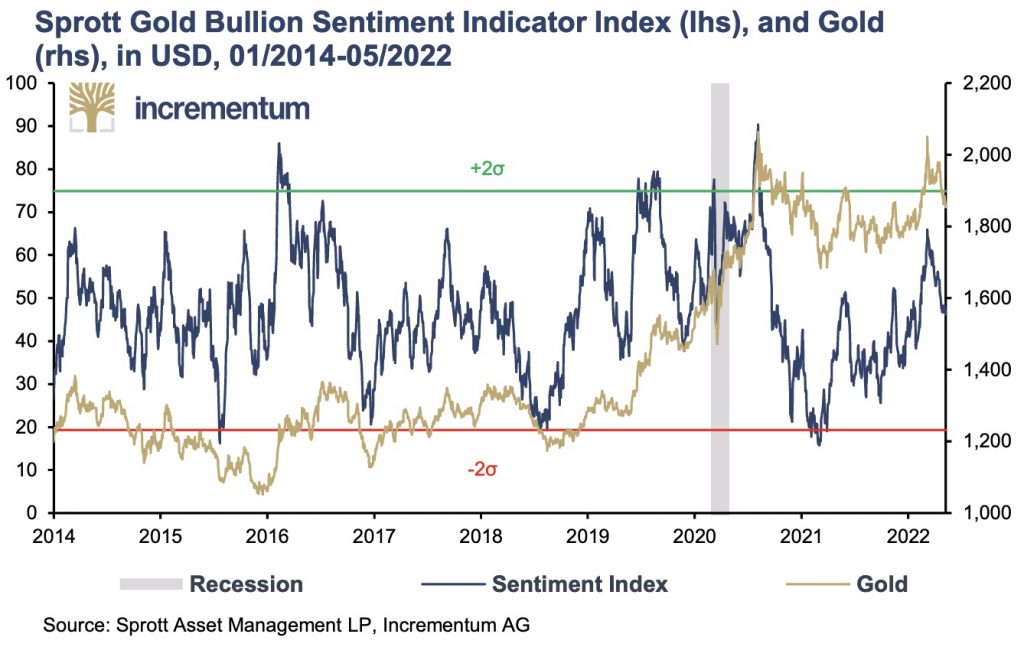