Here Is One Of The Most Important Pieces Of 2016

On the heels of yesterday’s Fed decision, here is one of the most important pieces of 2016.

(King World News) Paul Brodsky, Macro Allocation Inc. — After yesterday’s policy statements by the Fed and Bank of Japan, a harsh light is being shined on the incredible nature of their communications. It would be wise in the current environment to structure investment portfolios with a pro-volatility bias…

Central banks in G7 economies have been carrying a heavy load for a very long time, especially noticeable to all since 2009. Zero and negative sovereign interest rates, asset purchase programs and whack-a-mole currency devaluations have avoided a counterfactual that would have included credit exhaustion, debt deflation and economic contraction.

Balance Sheet Time Bombs
Their now conventional unconventional monetary policies have been overlaid by communications policies that have fostered a narrative of economic normality and cyclicality. It all seems rather disingenuous given their successful coup de marché, and maybe a bit delusional too given their serious demeanors discussing Philips curve stuff in the face of balance sheet time bombs.

And now…central banks seem exhausted too, not only in terms of being able to stimulate consumption and levitate asset prices, but also in terms of their communications policies that suggest they can.

QE Infinity
The BOJ may have jumped the shark yesterday when it embarked on a new program called “QQE with yield curve control” whereby it will pin 10 year JGB yields at 0%. The BOJ also signed on to a new program called “inflation overshooting commitment” whereby it will keep creating sufficient base money until CPI inflation exceeds 2%. Let there be no mistake: this is formalized QE Infinity.

It was a tacit admission that lowering funding rates further would have no stimulative impact on the Japanese economy, and that all it can do at this point is expand the size of its balance sheet. BOJ watchers do not understand why more attention wasn’t paid to the short end of the curve, which would be easier to manage. Pinning ten year yields without any pretense of economic stimulation can only be a policy meant to prop up the banking system. The primary objective of any central bank – the reason they were initially founded – is to protect the banking system in times of serious economic distress. That time seems to be now, at least according to the BOJ.

Meanwhile, the Fed passed on hiking rates yesterday despite its seemingly desperate interest in doing so. This bolstered the idea that its ability to execute policy by building market consensus – and even consensus around the table at the Eccles Building – has vanished. Fleeting Fed credibility is the talk of the town (all towns but Washington), and the Fed is perilously close to approaching outright market rejection. It may still be the monetary authority over the world’s most prominent reserve currency, but it has lost its power of suasion over dollar denominated capital markets.

The BOJ as a Leading Indicator
We have argued that the malaise and deflation experienced in the Japanese economy over the last twenty years reflects a truer signal of global economic strength (or weakness, as the case may be) than the middling economic performance in other developed economies, and that the policies of the BOJ are harbingers of things to come for other central banks. This was not terribly insightful on our part.

Some of us remember looking at zero interest rates in Japan in 1999 and shaking our heads. “What’s up with that,” we thought. “Don’t they know how to run an economy?!” Then we watched in amazement when the BOJ first embarked on QE in March 2001. “Are you kidding me?! The central bank is buying Japanese government bonds?! What a circus Japan has become!” We were not as amused when the BOJ began buying equity ETFs in 2010, maybe because the Fed, ECB and BOE had already replicated the BOJ’s first two radical policies. “Uh, excuse me…is that what’s next in the West? Is it even legal?”

It now seems clear that the Japanese experience, complete with parabolically rising debt-to-GDP ratios, uncomfortably aging demographics, and monetary policies that test credulity, is the model the rest of us are following (and we are pleased to hold the long Nikkei/short Yen position first opened in December in our model portfolios).

All developed economies are up to their eyeballs in unreserved credit (i.e., obligations that are not yet collateralized with base money and increasingly not covered by GDP). This is the common denominator, one which eventually must elicit a balance sheet recession (or worse), and one which must be fought with currency inflation that de-leverages systemic debt. (Through monetary inflation the value of systemic debt is not reduced in nominal terms, but the burden of repaying the debt is reduced once actual money is more abundant.)

The Fed will eventually have to follow the BOJ down the QE Infinity rabbit hole too, but not yet. In a global economy where all wealth and income are relative and the value of savings is becoming ever more ephemeral, the Fed does not have to run faster than the BOJ, ECB, BOE or PBoC, it just has to make sure the full faith and credit of dollars and dollar assets is more highly regarded than the rest. (It doesn’t have to run faster than the bear, if you will, just faster than its friends.) 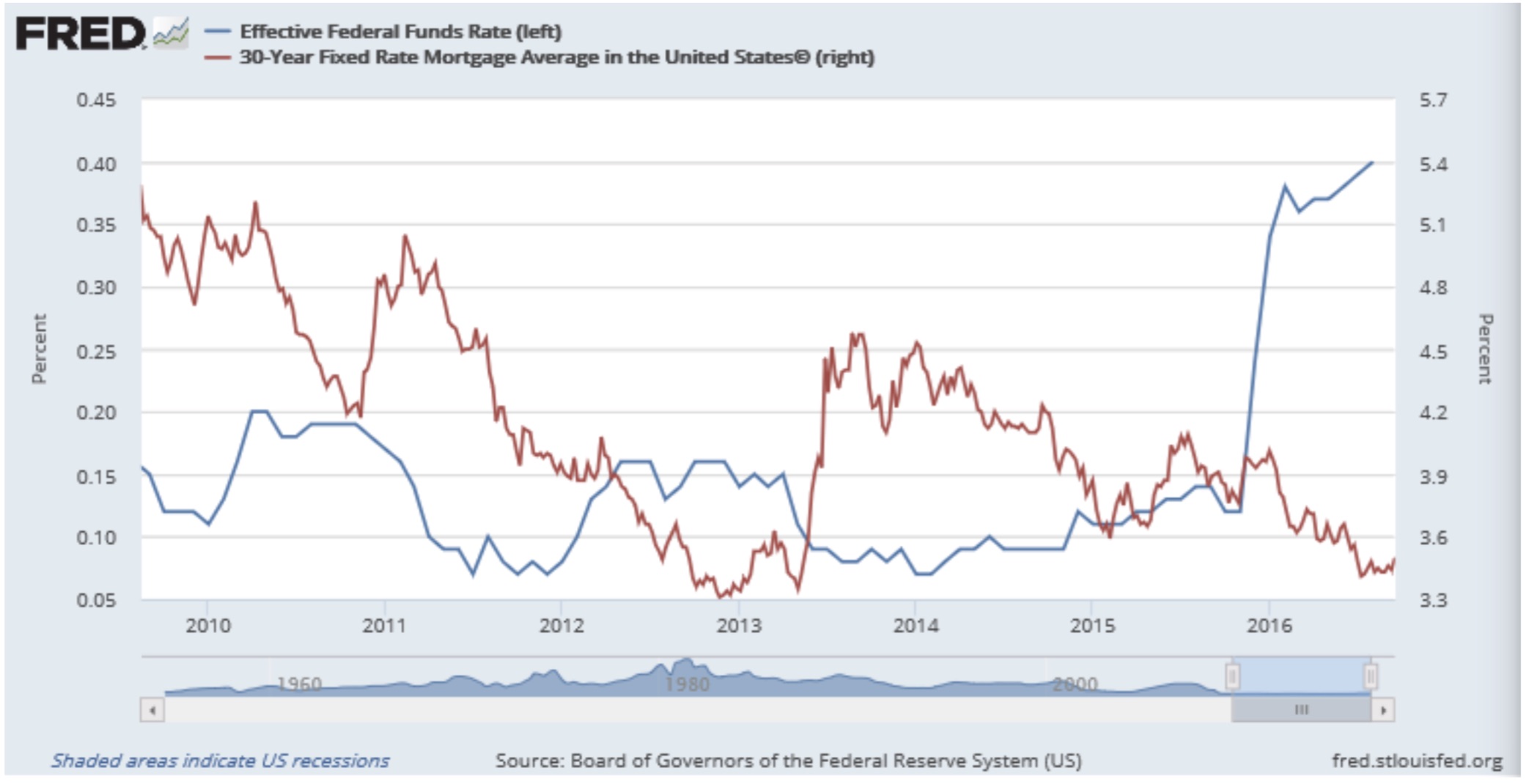 And so the Fed is scheduled to hike rates in December. Doing so would strengthen the dollar, attract capital to US banks and capital markets, and ostensibly widen net interest margins for US banks by steepening the yield curve. The last time the Fed hiked, in December 2015, US mortgage rates subsequently fell, further supporting US real estate values and consumer confidence. Maybe the Fed can make it an annual December event? Like when the circus comes to town.

The Circus That Leads To All Hell Breaking Loose
Diverging from other central bank policies would be a cunning (albeit selfish) choice for the global hegemon in a slow-growth global economy. It would be the best indicator of all that monetary policy makers across the world are waiving the white flag. Then, we would expect all hell to break loose. ***KWN has just released an absolutely jaw-dropping interview with the man who advises the most prominent sovereign wealth funds, pension funds, hedge funds, and institutional funds in the world and you can listen to it by CLICKING HERE OR ON THE IMAGE BELOW.