The world is facing the biggest demand shock since the 2009 global financial crisis.

Biggest Demand Shock Since 2009 Global Financial Crisis
February 10 (King World News) – Ole Hansen, Head of Commodity Strategy out of Sweden:  “Of all sectors, commodities – for now –  remain the one caught in the cross-hairs of the virus outbreak. In my latest Weekly Commodity Update I wrote:

“Commodity markets continue to bear the brunt of the coronavirus outbreak in China. The concern remains that the wider markets have yet to reflect the full impact of the disruption. With China being the world’s most dominant consumer of raw materials, the impact continues to be felt strongly across key commodities and the world is facing the biggest demand shock since the 2009 global financial crisis.”

Hedge funds and large speculators responded to these developments by cutting bullish bets across the sector by one-third or the equivalent of $20 billion. This the biggest one-week reduction since December 2017 was broad-based with 19 out of the 24 futures contracts being net-sold. 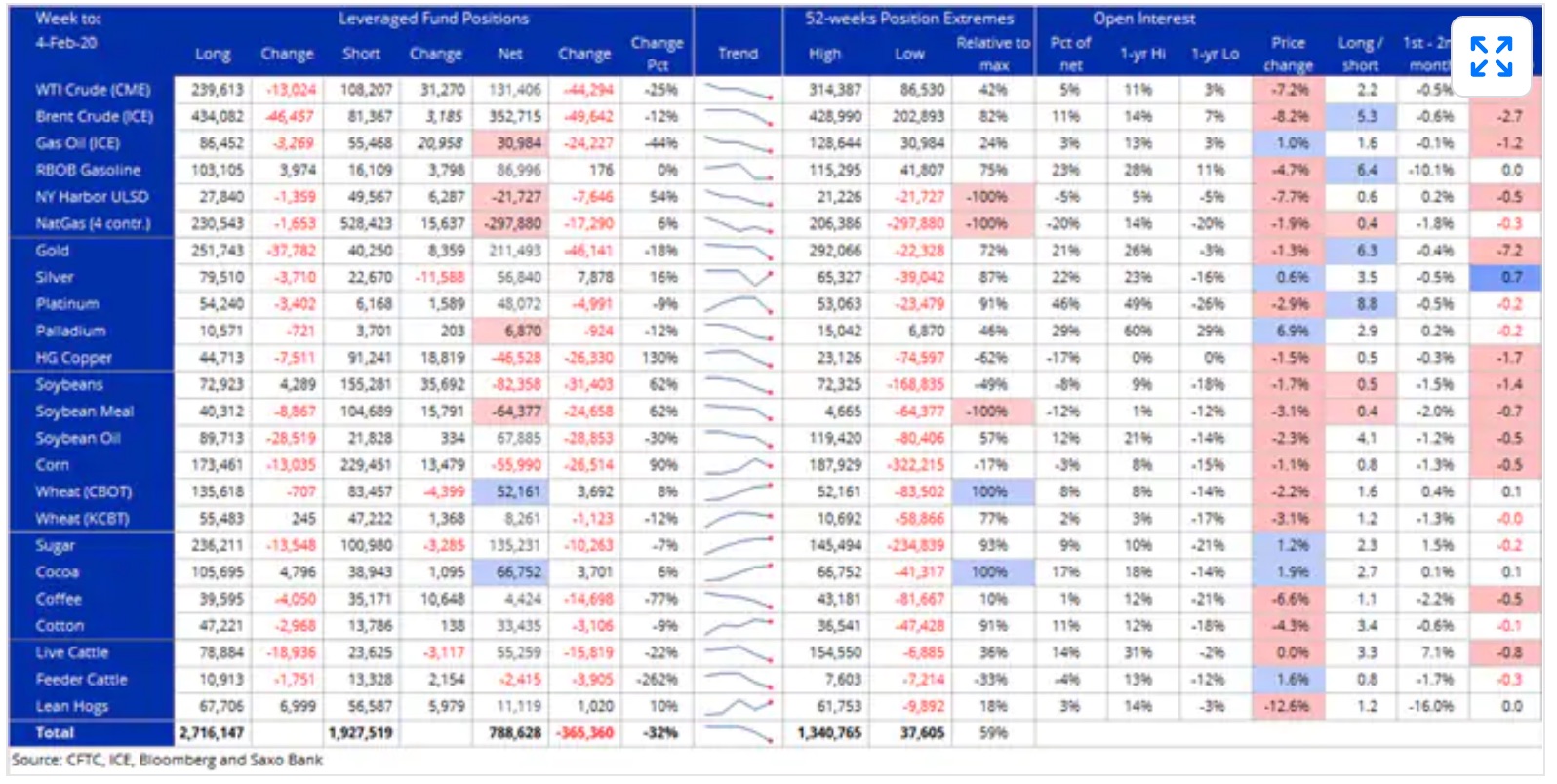 Energy
Hardest hit was the energy sector as reports began pointing to a 3 million barrels/day drop in Chinese demand. The combined net-long in WTI and Brent crude oil slumped by 94k lots on top of the 83k lots that was sold the previous week. At 484k lots the combined long was still 195k lots above the low last October when Brent reached a $56.15/b low. It closed on Friday at $54.5/b.

With this in mind the market will be paying close attention to continued efforts from the OPEC+ group of producers. While a 600,000 barrels/day cut was discussed last week in Vienna some uncertainty exists with regards to whether Russia will be prepared to join this effort. Failure to do so could potentially unleash another wave of long liquidation given the risk of sub-50 dollar Brent.

Slumping natural gas prices in Europe and Asia kept US prices under pressure as well. The combined net-short of four Henry Hub deliverable contracts (futures and swaps) reached a fresh record of 298k lots, almost 400k lots below the five-year average.For natural gas producers a slowdown in demand from China could not happen at a worse time with global inventories already elevated following a mild Northern Hemisphere winter. In Europe, the Dutch TTF contract dropped to the lowest since August 2009 while in Asia the Japan/Korea LNG (Liquified Natural Gas) contract hit a record low at $3/MMBtu.

All of this being bad news for an already depressed U.S. natural gas market where robust production growth has increasingly been relying on exports through LNG to curb inventories. 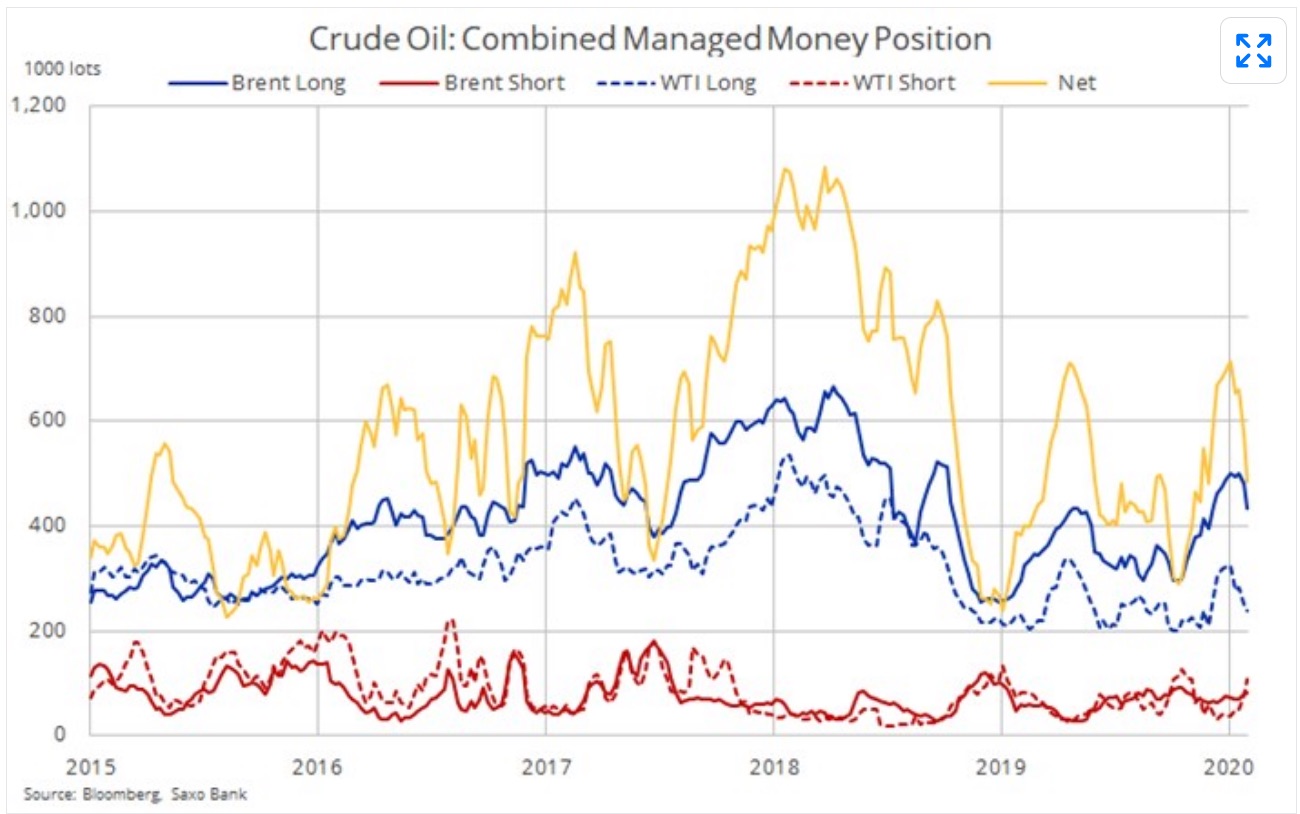 Gold
Gold longs were cut by 18% or 46k lots to an eight-week low after the price had struggled to respond to an overwhelmingly bullish backdrop of lower stocks, bond yields and general virus uncertainty. The fact that it managed to hold support at $1550/oz last week while ETF holdings rose to a record calmed the nerves with underlying support still strong.

Gold Managed To Hold $1,550 Despite Liquidation 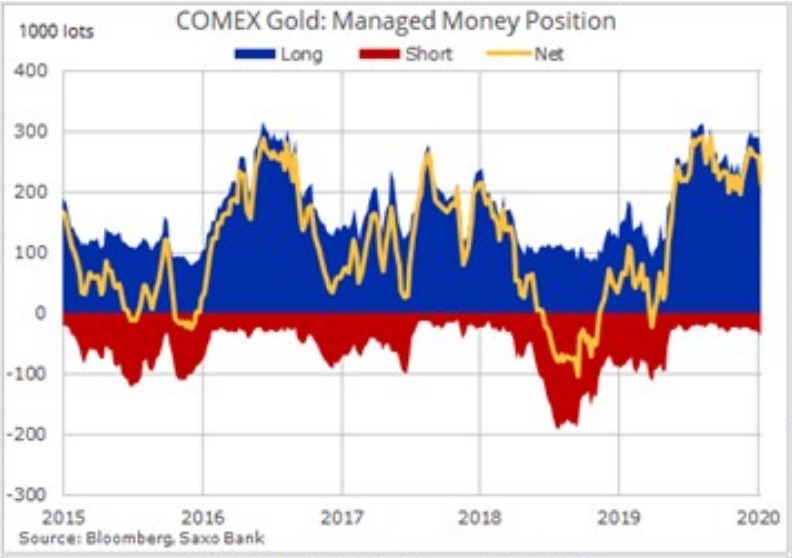 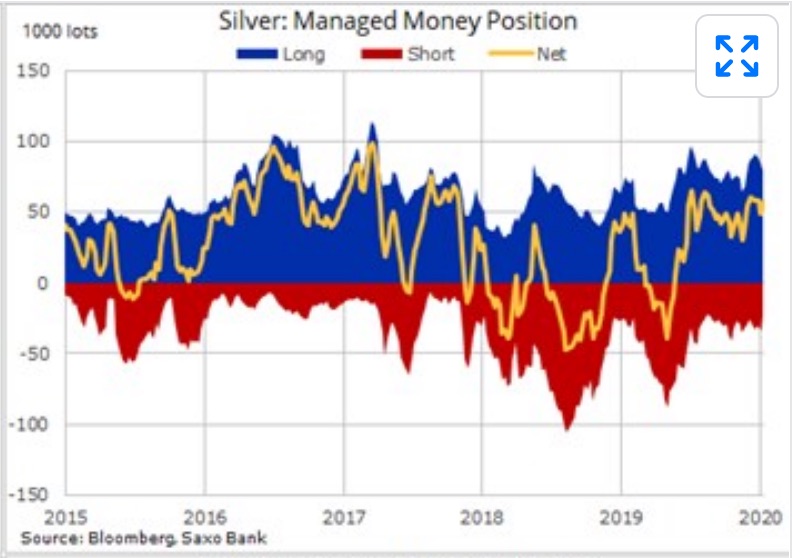 Copper
The HG copper short more than doubled to 47k lots as funds sold into the bounce early in the week. This despite support from Peoples Bank of China which returned to work after the Lunar New Year to cut rates and add liquidity. With half of the global copper demand coming from China the metal has become a key proxy for the short to medium term outlook in China. Hence the increased selling from funds using copper as a hedge against economic weakness. 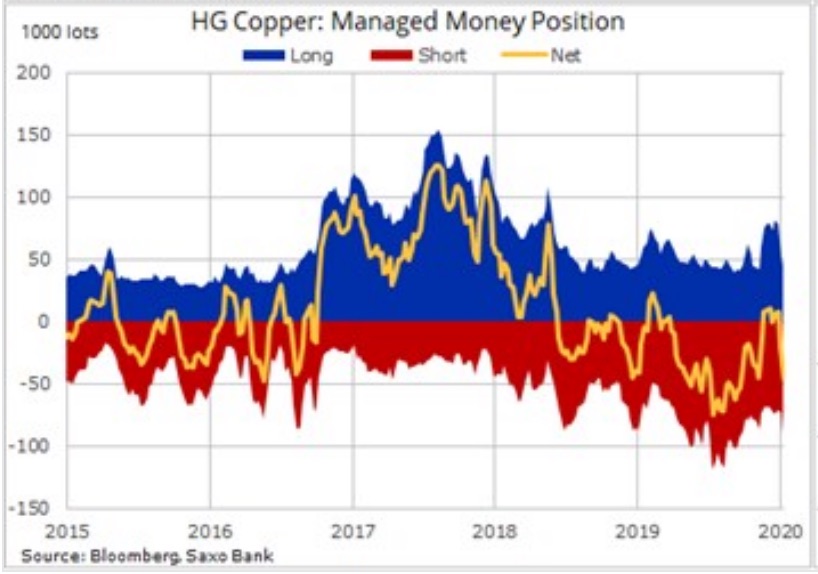 Cocoa went against the prevailing trend with funds increasing their net-long to 67k lots, the highest in more than five years. Cocoa has enjoyed a strong rally so far this year with lack of rain in key production areas of West Africa, the world’s top producer, raising concerns over yields.

Summary:
Hedge funds cut bullish commodity bets by one-third during the week to February 4. It covered a period where global markets maintained a close eye on China and the continued spreading of the coronavirus. This in order the ascertain its impact on Chinese and global growth. The broad based selling was led by crude oil, gold, copper and soybeans.

Eric King:  “Ivan, as you know I have purchased well over one million shares of your company’s stock in the open market because I am very excited about the multiple world class discovery opportunities in Gold, Silver, and now Copper.  And now this news of your Environmental Permit (DIA) has come in which has to be extremely exciting for management as well as for shareholders.”

Ivan Bebek:  “We are very excited.  We have been talking about the dream of finding one of the world’s largest mining discoveries in the last two decades and now that dream is getting closer to being a potential reality.  We are on the cusp of putting drills on the property and making that discovery.  An opportunity like Sombrero comes to you once in a lifetime – if you are lucky.  We could be discovering half of a world class copper belt, and if this wasn’t enough what has shareholders so excited is this is one of three world class discovery opportunities we have now in Gold, Copper and importantly, Silver…

Eric, all of this is came together because we have one of the strongest exploration teams in the business.  These projects not only have investors excited, they have also drawn the attention of several major mining companies across the globe, not just for the world class opportunity at Sombrero but also for what’s happening now at our Silver/Gold project Curibaya. Having 3 world class opportunities in one company gives us the grand slam opportunity of possibly splitting our company into 3 companies (shares) for the price of 1, thereby substantially turbocharging the potential wealth creation for our shareholders.” Auryn Resources, symbol AUG in Canada and the US.

KWN has released an audio interview!

Stunning Development In The War In The Gold Market!