Today the man who has become legendary for his predictions on QE and historic moves in currencies and metals told King World News that yes, there will be a historic crash in global assets, but this is the real danger.

February 15 (King World News) – Egon von Greyerz out of Switzerland:  Akhlys, the Greek goddess of Misery and Poison, is exerting a major influence on the world currently. And sadly the dosage of misery and poison is more likely to increase than recede.

As Paracelsus, the renowned 16th century Swiss physician said; “all things are poison, it is the dosage that makes it either a poison or a remedy.”

When a world already in trouble was hit by a severe financial crisis in September 2019, the dose of debt was already excessive. But as the Fed and the ECB opened the money spigots fully, they filled the world with poisonous fake money. There were clearly severe problems in the financial system although the Fed & ECB revealed nothing.

COVID-19 IS MINUSCULE COMPARED TO SPANISH FLU OR BLACK DEATH
Four months later, in February 2020, the world was hit by another dose of misery and poison in the form of a pandemic. When we look back at Covid-19, it will probably just be regarded as a nasty flu since a very small percentage of the global population has so far been affected seriously.

To date, 2.4 million have died from Covid-19. Obviously a big number but still only 0.03% of the global population. And that number is probably exaggerated since most hospitals put down Covid as the cause of death regardless.

In the mid 14th century, Black Death killed as many as 50 million people or over half of Europe’s population. That is 1666x greater than Covid-19…

There is no exact definition of a pandemic except that it is an epidemic that spreads globally. The problem with the reporting of Covid-19 deaths is that it encompasses total deaths (many probably for different reasons) whilst a much more appropriate figure would be to report excess deaths above the normal rate.

EXCESS DEATHS MORE IMPORTANT THAN TOTAL DEATHS
The estimate for the US is that there were 3 million deaths in 2020. This figure is around 260-300,000 higher than in 2019, an increase of 10-11% between the two years. So not a dramatic increase and one could question if it justifies closing down major parts of the economy and permanently killing off a number of businesses and jobs.

Many people today are suffering more from government action than from the disease. In addition, nobody knows the number of deaths from other ailments but Covid that are not being treated. That figure could in itself be greater than the excess deaths.

MAJOR CENTRAL BANKS BALANCE SHEETS UP6X SINCE 2006
But let’s go back to the poison again. The financial system has been poisoned for decades by governments’ excess spending and central banks’ profligate printing of toxic and worthless money. And now they have the perfect excuse to senselessly create trillions of dollars, euros, yuan or yen. The world doesn’t realise that this money, fabricated by pressing a button, is no different from the Monopoly board game money.

Just look at the balance sheet of the four major central banks – the Fed, ECB, Bank of Japan and the People’s Bank of China. 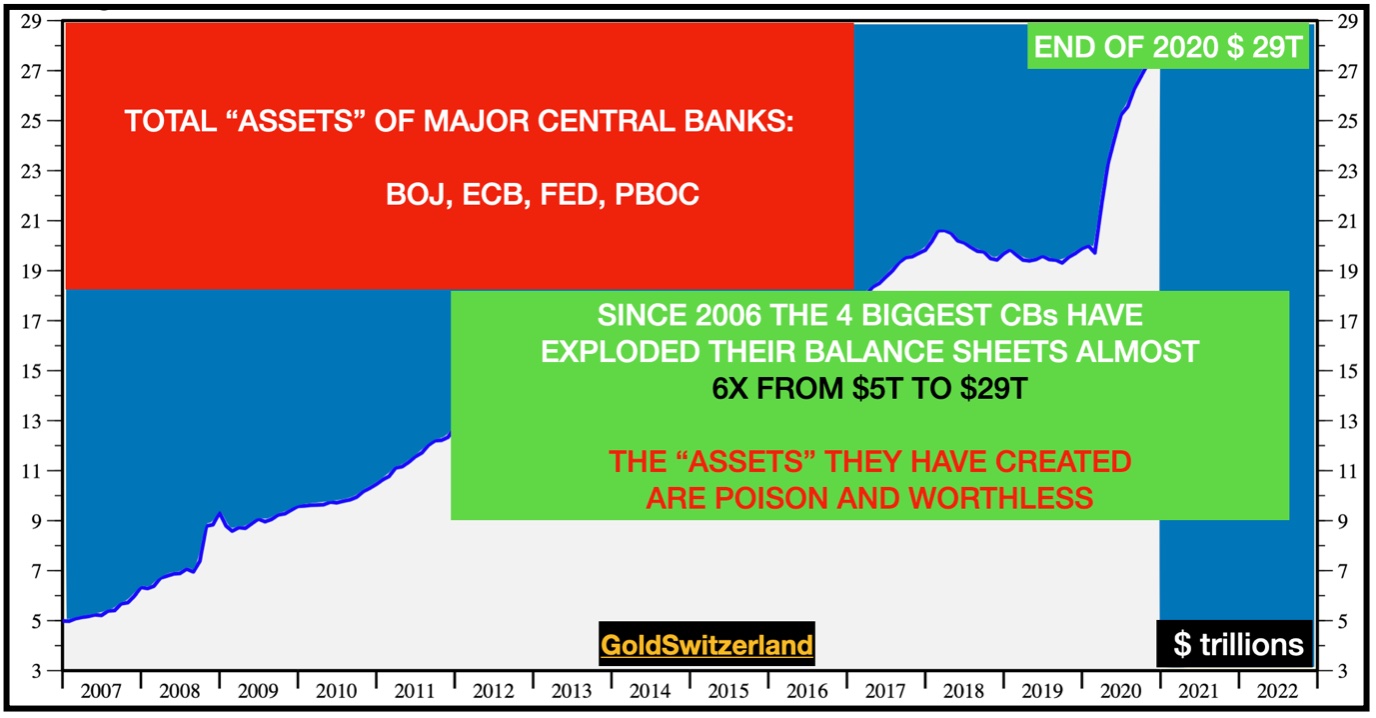 As the graph shows, these banks balance sheets have exploded almost 6x since 2006. In 2008-9, their total balance sheet were $9 trillion and now they are $29t.

THE GREAT FINANCIAL CRISIS IS BACK
We were told that the crisis was over in 2009 and still  the balance sheets of these central banks are up more than 3x. Hmmm……

The reason is simple, the Great Financial Crisis in 2006-9 was never solved, the can was just kicked down the road.  But this time the can is too big. 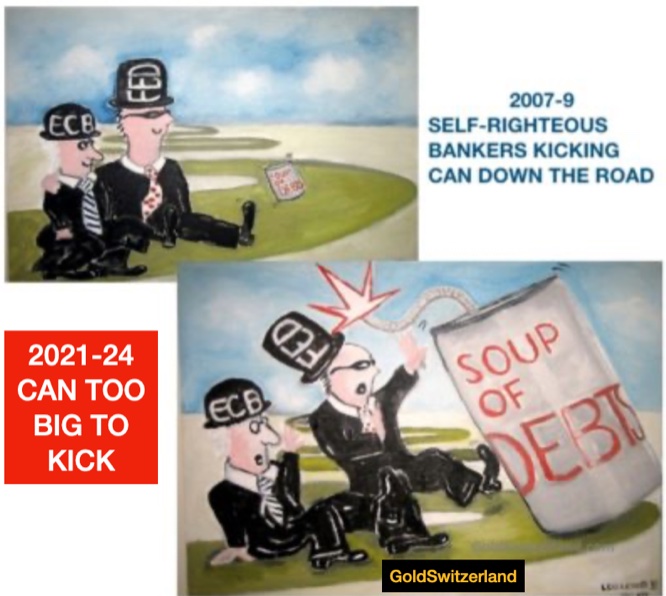 A WORLD DROWNING IN DEBT
And now 12 years later the whole world is drowning in $280 trillion debt – up 3x this century.

The illustration above shows global debt reaching $360 trillion by 2030.

This assumes a simple extrapolation of current trends. In my view, there is a major risk of a hyperinflationary debt explosion in the next 4-9 years to $2 quadrillion or more.  Probably it will take less than 9 years.

DERIVATIVES – WEAPONS OF MASS DESTRUCTION
So how is this massive increase possible? There are at least $1.5 quadrillion of derivatives outstanding today. Derivatives are an incredible gravy train for banks in rising and liquid markets.

But with crashing stock markets and massive pressures in debt markets, there will be little liquidity in derivatives. This will likely lead to central banks printing enough money to buy most of the derivatives of ailing banks. This is what would create $2 quadrillion or more in global debt. 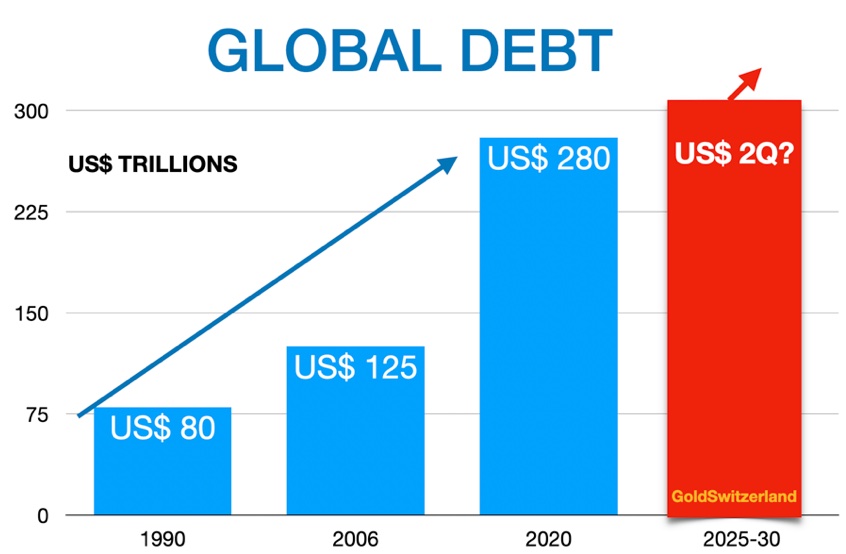 THE MORE DEBT THE MORE ASSET MARKETS INFLATE
So what is happening to all this debt based money created. Well almost none of it reaches the real economy but instead it stays with the banks and is used by private and institutional investors to buy assets like stocks, bonds and property.

So while there is very little that reaches the ordinary man, the wealthy can take advantage of this massive liquidity to further expand the already epic bubble in asset markets.

The graphs below, showing total US M1 money supply and its velocity, illustrate this perfectly. 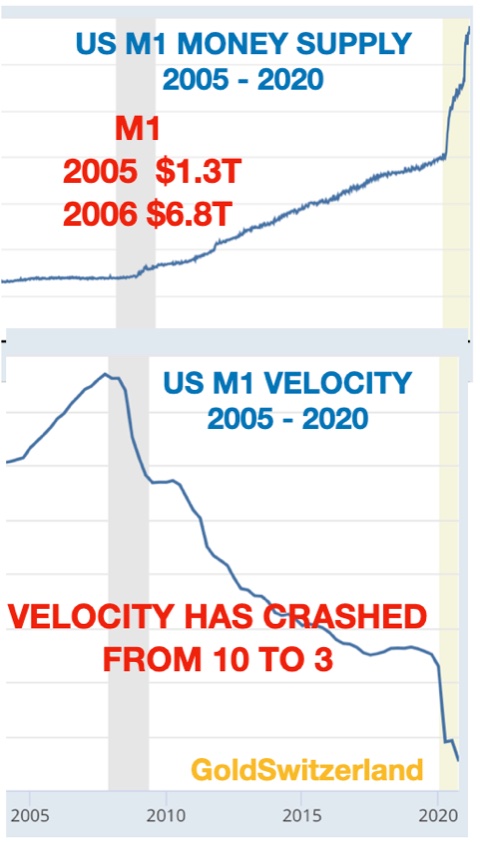 As Money Supply surges 5x from $1.3t in 2005 to $6.8t in 2021, the Velocity Money crashes from 10 to 3. This means that the money printed does not reach the real economy but instead is just used to inflate asset prices.

Since all this money is created out of thin air and is just toxic or worthless, it would have little effect in simulating the real economy. But investors are under the illusion that this toxic liquidity is actually creating wealth! No wonder they are under that illusion since global equities have increased in value by $24 trillion since March 2020. That is a staggering 30% of global GDP.

Why should anyone work when by printing money and investing, the world can create 30% of GDP in just 10 months by buying stocks. Because investors neither see nor worry about that stocks are going up just because they are going up rather than due to rising profits or improving fundamentals.

GLOBAL ASSET CRASH AHEAD
What they don’t realise it that a global crash is right ahead – a crash that will destroy 90-95% of their illusory wealth.

“The market always goes up! So it is always right to be in the market.”

They have forgotten that in 1929-32, the Dow fell by 90% and that it took 25 years to recover. And this time the bubbles of debt and assets are far greater.

So now we have toxic valuations created by toxic money.

BOSSES EARNING 357X MORE THAN WORKERS
The rich are also getting substantially richer which is what creates revolutions. Just take the average chief executive of an S&P 500 company. He now earns 357x as much as the average worker. Back in the 1960s he earned 20x! And in the mid 1980s it was still only 28x.

The graph below illustrates this phenomenon very clearly.

GREENSPAN – MANNA FROM HEAVEN
But then things improved for the top earners again in the mid 1980s. First stock markets started booming. Then, once Greenspan became chairman of the Fed, that was like manna from heaven for investors.

The programme of producing manna money has just got better with every new Fed chief. Tens of trillions of dollars of debt has been created to boost the stock market. But once the 2000s got going, manufacturing money wasn’t sufficient. No, the money had to be free also or even better, you got paid for borrowing money. Well at least banks and central banks do.

THE REAL DANGER: HOW WILL IT ALL END?
Debt bubbles can only end in one way. With imploding debt and crashing asset markets. But before that there will be a final overdose of poison in the form of massive money printing. This in a last and desperate attempt to solve a debt problem with more debt.

Sadly central bankers never studied Paracelsus theorem that all things are poison if the dose is too high. They will soon find out……..As the last overdose of debt hits the world, most currencies will finish their journey to ZERO, leading to hyperinflation.

HYPERINFLATION IS A CURRENCY DRIVEN EVENT
Many economists and commentators are certain that the world will not see inflation or higher interest rates for years. They can’t see a demand led inflation.

Let’s go back to history again. History helps us to predict the future but very few so called experts understand the significance of history. Virtually every debt bubble in history has ended in a currency collapse and hyperinflation.

Few understand that hyperinflation is a currency driven event and not demand driven. With most currencies down 97-99% since Nixon’s fatal decision in 1971 to close the gold window, the world will soon experience the final move to ZERO. But remember that this move involves a 100% fall of the currencies from today. This is what will lead to hyperinflation. Just study history.

Hyperinflation normally only lasts a short period like 1-3 years. Thereafter the world will experience a deflationary implosion of debt and asset prices. The banking system is unlikely to survive such a collapse. This scenario is obviously based on assumptions and probabilities. It is also based on history.

No forecast can ever be certain until afterwards. But at that time it will be too late to protect yourself. What we know today is that risk is at a maximum. We also know that to protect against this uber-risk is not just wise but absolutely critical. History tells us that in every major economic crisis, physical gold and silver has been the ultimate protection.

Don’t expect it to be different this time…This will link you directly to more fantastic articles from Egon von Greyerz CLICK HERE.