Today the man who has become legendary for his predictions on QE and historic moves in currencies and metals warned we will soon see the US dollar crash and a new world currency will be unleashed.

September 27 (King World News) – Egon von Greyerz:  The Chinese understand the long game and they have infinite patience. They have always known that they never needed to attack the US, financially or militarily because China has invariably understood that the US would self-destruct. 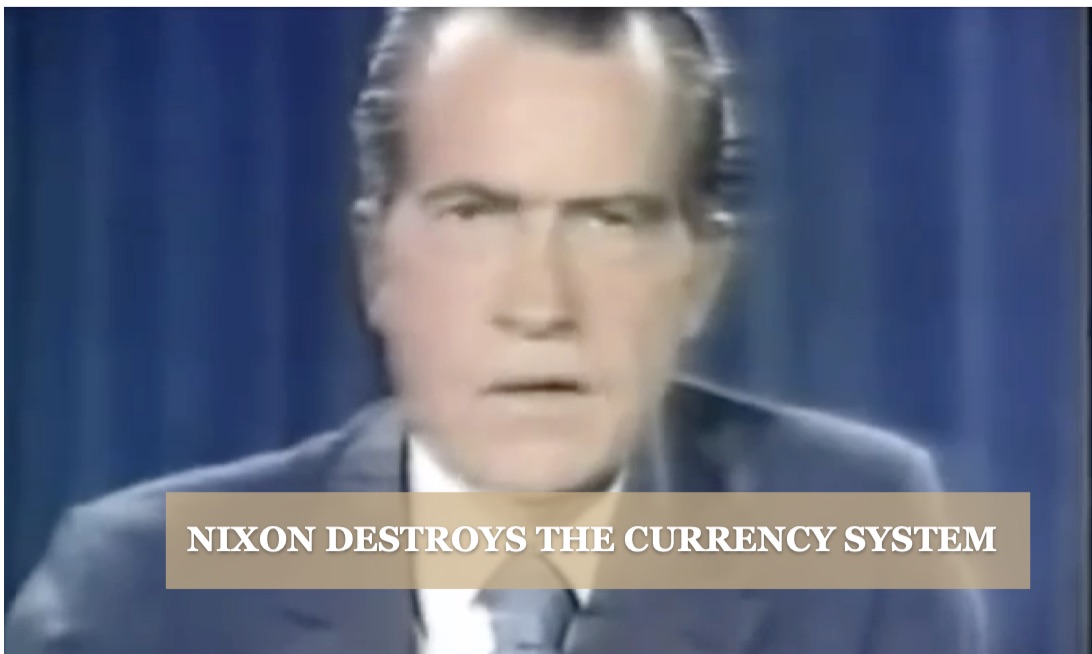 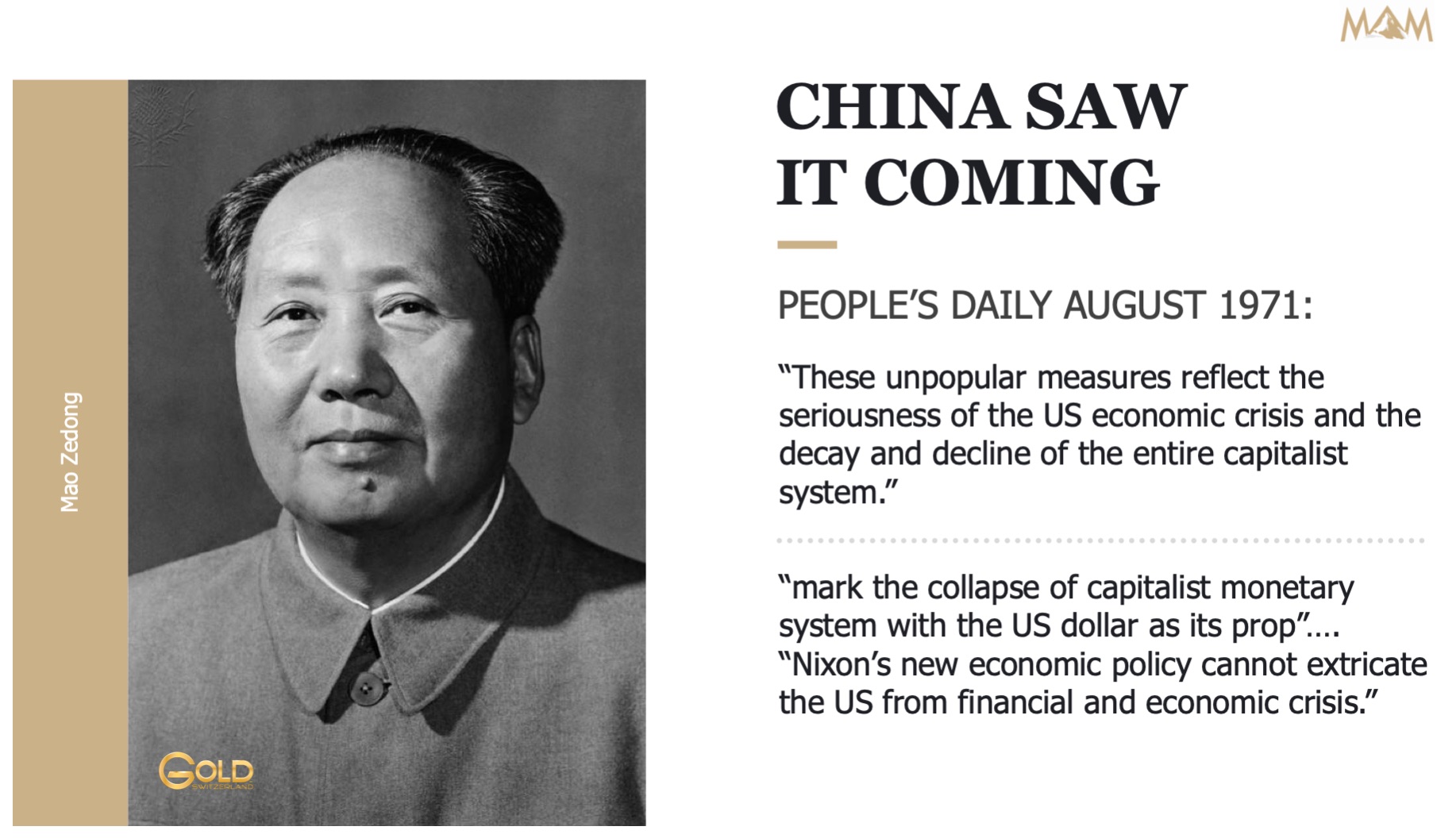 POLITICS AND PRINCES DON’T MIX
The Duchess of Sussex who has dragged her poor husband, Prince Harry, into the US election has declared that this will be the most important election in history. She will most probably be right but for the wrong reason. Meghan Markle believes a Biden victory is the only way that the US can be saved, primarily because she can’t stand Trump (which is reciprocal). It probably doesn’t matter who wins the election when is comes to stopping the crash of the US economy and currency.

But what is guaranteed is that Biden’s policies will bankrupt America much faster than Trump’s. The profligate democrats will forgive trillions of debt, increase spending and reduce taxes for the masses.

The Chinese have waited patiently for this moment. They forecast the collapse of the “capitalist monetary system with the dollar as its prop” already half a century ago and how right they have been.

THE DAYS OF THE DOLLAR ARE COUNTED
A 98% fall in real terms – against gold – and a 78% fall against the Swiss franc tells the world that the days of the dollar are numbered. So will we see the US bald eagle crash to the ground and a phoenix in the form of a new world currency emerge like in the 1988 Economist article? 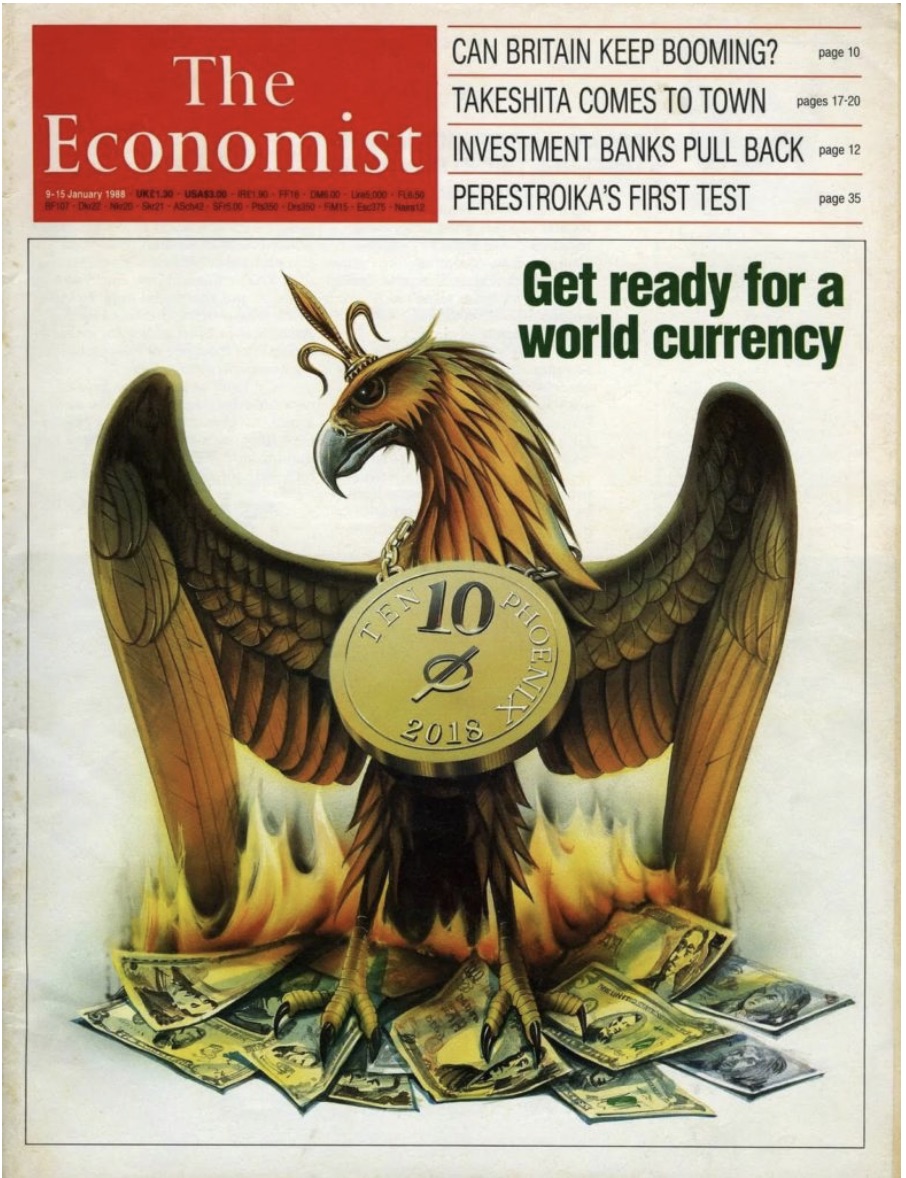 Well, the dollar crash is guaranteed and a Biden victory will accelerate the move. But there is unlikely to be a new world currency in the near term. As the dollar falls and with it the US economy, China will gradually emerge as the next dominant economy and super power. But this will take time. Before that we will have chaos in the global financial system, economic collapse in many countries, political upheaval, riots, and wars…

BIDEN – A CATALYST FOR ACCELERATED US DECLINE
So is a Biden victory going to cause all this? No, not solely. But just as the coronavirus sped up that fall of the US and world economy, Biden will be the catalyst for an accelerated decline of the US. Both events would have happened anyway but probably not as dramatically as with these two powerful catalysts – CV and Biden.

The coming US election will have bitter consequences for the US and the world whoever wins. It is likely to be aggressively fought not just before November 4th but more so after the result is declared. There will be a plethora of forums where the result will be disputed and fought in the courts, media, streets, in families, and in politics of course.

CHURCHILL – WE SHALL FIGHT ON THE BEACHES
The fighting everywhere reminds me of Winston Churchill’s speech in parliament in June 1940 after the evacuation of Dunkirk:

Churchill’s speech was obviously to unify and prepare the nation for the major war effort ahead. But the consequence of the US election will be extremely divisive and damaging for the US whoever wins.

So 2021 is not just likely to be the start of a severe and long lasting economic downturn or collapse for the US, but also an extended period of extreme political and social disharmony and discontent.

REMINISCING OVER HALF A BETTER TIMES
I have just entered my 52nd year of working life. But I can clearly remember life before that as a young boy in Sweden back in the 1950s. This was a time when the family was the kernel of society and there was total respect for law and order. Mothers were at home and looked after the children. The wages of the father were sufficient to provide for the family. Very few people had debt and obviously there were no credit cards. Most things were paid for in cash. The police were unarmed and there was total respect for their authority. Back then Sweden was a very homogenous society with few immigrants.

There was very little crime and virtually no violent crime. I remember visiting churches in the countryside and the doors were open and church silver would stand on shelves totally unprotected. Young children could move around freely without parental protection. Very few people went on holiday abroad or had cars or televisions. The economy was strong, based on real money with little debt. The quality of life was far superior to today. I am not talking about material things but people were much happier with less stress and strong respect for their fellow humans. There was integrity with strong moral and ethical values.

THE END OF AN ERA
I do realise that all of this could sound like a mature man nostalgically reminiscing and embellishing the past. There might be some truth in that criticism but I am quite convinced that the era we are now in is the end of a cycle when it comes to quality of life, values, crime, honesty, integrity. The current debt based economy with fake money and values is clearly creating a very unhappy society and many discontented people.

This is why the current cycle needs to soon come to an end. The world needs a proper forest fire which destroys the debt and all the bubble assets financed by printed money and worthless debt. The coming fall of the global debt edifice will be a relief for the world but it will obviously involve a long period of suffering. But only after this fall can the world start a new cycle with green shoots based on a sound monetary and financial system which is based on real values, both moral and material.

HALF A CENTURY OF DRAMATIC CHANGES IN THE WORLD
Coming back to my half a century of working life, there have also been some dramatic changes in the world. The table below shows what has happened to debt, dollar, GDP & stocks during my 51 years’ involvement with financial markets, between 1969 and 2020. US federal debt is up 75x and GDP is only up 20x. There is no clearer evidence that the US economy is running on empty and that more and more debt is required to produce an increase in GDP in nominal terms. 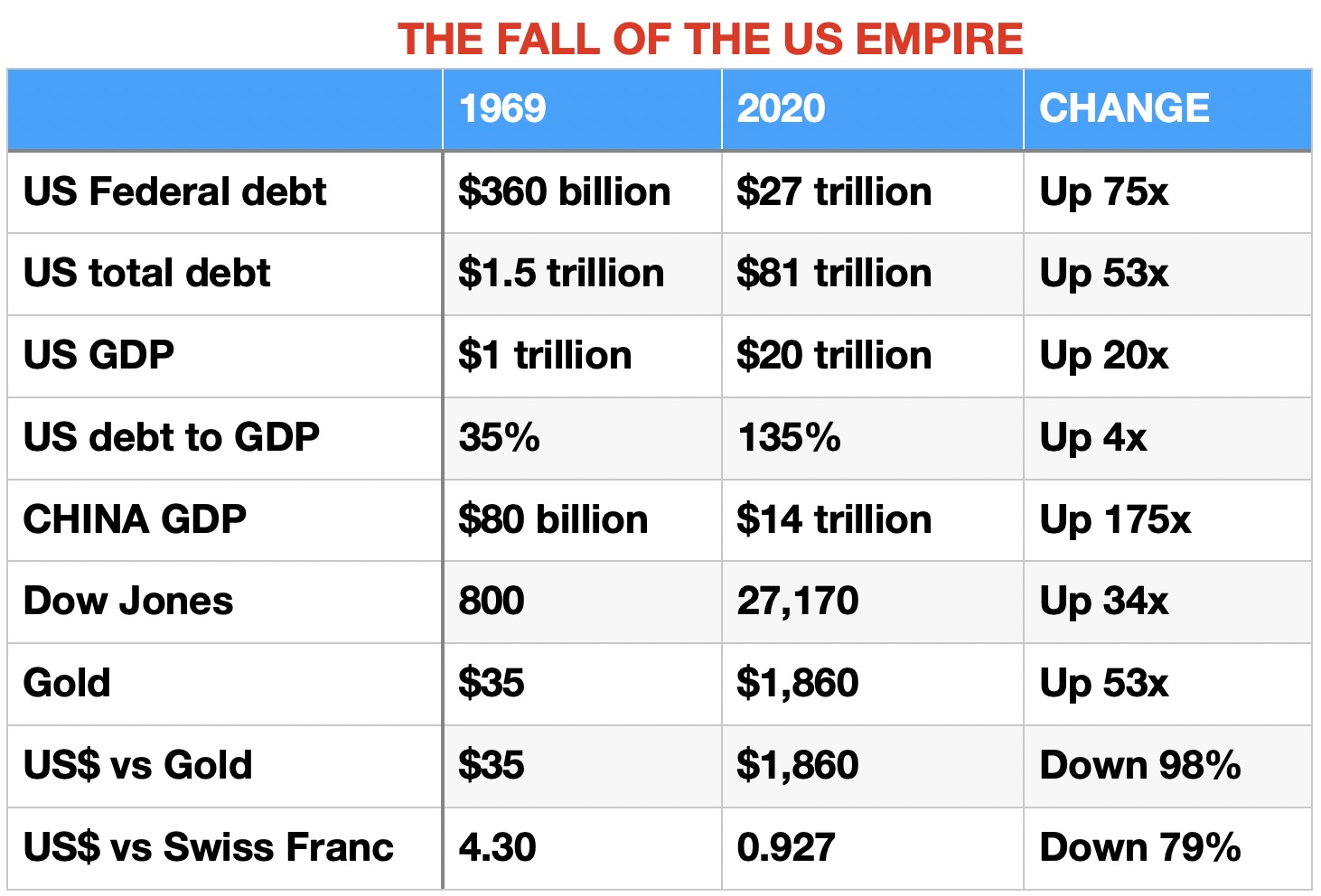 DEBT DEFAULT COMING
US debt to GDP has now reached 135% against 35% in 1969 and growing. These debt levels are unsustainable for future growth. With falling tax revenues and rising expenditures, there is zero chance that this debt will ever be reduced. And when interest rates go up, the US will not even be able to service the debt. So a debt default is very likely in the next few years.

Whilst US GDP is up 20x since 1969, China’s GDP is up 175x. There can be little doubt that China will be the next global economic superpower. Only a revolution in China would stop that.

Gold is up 54x since 1969 and the Dow 53x. If dividends after tax are included and reinvested, the rise of the Dow and gold would be fairly equal.

I started the article with China’s view, in 1971, on the future of the dollar and the US economy. The debt explosion and slow GDP growth are clear evidence of how right China was. But the dollar’s 98% fall against gold and 79% against the Swiss franc confirms China’s  1971 prediction:

“…..the seriousness of the US economic crisis and the decay and decline of the entire capitalist system.”

“…..mark the collapse of capitalist monetary system with the US dollar as its prop…. Nixon’s new economic policy cannot extricate the US from financial and economic crisis.”

So there we have it. The wise Chinese saw half a century ago what would happen to the US, the dollar, and the capitalist system, and they already knew then that China would be the main beneficiary.

But destruction of currencies and fall of empires is not new in history. Von Mises stated this phenomenon very eloquently:

2021 THE CHINESE YEAR OF THE GOLDEN OX
2021 will be the Chinese year of the Metal or Golden Ox. It will also be the 50th anniversary of Nixon’s fatal decision to end the gold backing of the dollar. As the golden ox rises in China, the US bald eagle will crash to the ground as a symbol of the crashing dollar and US economy. 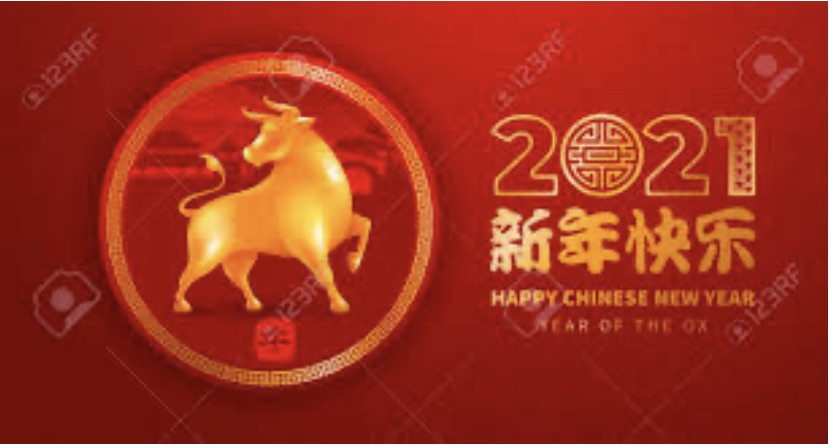 2021 is likely to be an ominous year in the global economy. We may not see the “final and total catastrophe of the currency system” completed, but we are likely to see the start of the final dollar collapse and a major surge in gold and silver.

Anyone holding depreciating dollars and other currencies will soon regret not holding real money in the form of physical gold and silver…For those who would like to read more of Egon von Greyerz’s fantastic articles CLICK HERE.