Today the man who has become legendary for his predictions on QE and historic moves in currencies and metals warned we are now on the edge of a global financial collapse and panic. He also discussed what you need to do to prepare right now.

Yes, Ground Control in the form of the major central banks have totally lost control and the world economy is now floating around helplessly without direction. Since the end of 2006, the major CBs (Fed, ECB, BOJ & PBOC) have increased their balance sheets from $5 trillion to $25.5t today. The great majority of the extra $20t created since 2006 has gone to prop up the financial system.

And even with these $20 trillion the world economy is more rudderless than it has ever been. Clueless CBs are doing what we had expected them to do which is doing the only thing they know – namely printing endless amounts of money that has zero value since it is created out of thin air. But the CBs money creation is just a small part of the problem. On the back of CB’s $25t balance sheets, global debt has exploded from $125t in 2006 to $280 trillion today…

None of this colossal extra debt has benefitted ordinary people. It has propped up the banks and made the gap between the haves and the have-nots dangerously high. In the US, for example, 10% of the population holds 70% of the wealth. No wonder we are seeing an increasing number of protests and riots. And as the economy deteriorates, the violence is, sadly, going to increase substantially.

SPACE ODDITY
So what is the destiny of this Space Oddity (name of Bowie’s song above) with not only central banks having lost control of but also governments? We can just take the US as an example since it is the biggest economy in the world and also the most vulnerable. But many countries are in the same situation.

Here are some of the areas which neither Trump nor Biden will be able to come to grips with:

The problems are endless and all of the mess above has been created by humans, even Covid-19, so we are looking at a world falling apart due to human failure and mismanagement – not that this is new in history.

SOUND MONEY
Anyone who understands sound money cannot seriously believe that the explosion of debt since 1971 (when Nixon closed the gold window) will end well. One of the most important attributes of sound money is that it must be scarce. The explosion of money supply and debt since 1971 proves what happens when money is infinite. The Keynesians and MMT (Modern Money Theory) followers believe that money can be pulled out of a hat like a rabbit.  And for 50 years they have got what they asked for without understanding the consequences. Because for every willful action, there are always serious consequences.

For 50 years, unlimited paper or fiat money has been created without any service or goods produced in exchange. Since 1971, total US debt has gone from $1.7t to $78t. In the same period, prices for houses, goods and services have exploded but most consumers are not aware of this since it is a slow process. As the chart below shows, debt has surged 46x in 1971-2020 whilst GDP is up only 18x. So the US economy is running on empty and more debt is required to raise GDP.

As the money created to expand the economy is fake, the increase in GDP is not real but just an inflated figure due to chronic currency debasement. 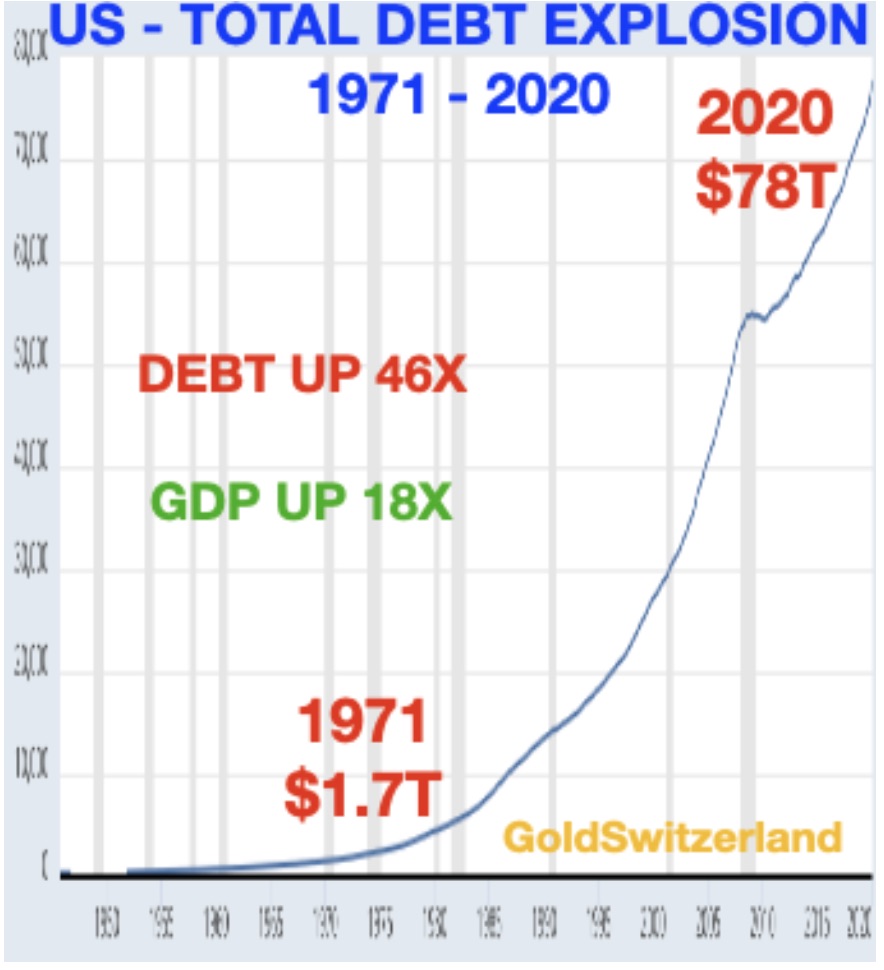 SOUND MONEY MUST BE SCARCE
The creeping inflation that the US and most of the world has experienced for half a century is best illustrated in the debasement of currencies.

One of the most crucial attributes of sound money is that it must be scarce. And this is why fiat money can never be sound since unlimited amounts can be and have been created. One of the very important features of gold is that it is scarce. The total global gold stock only increases by 1.7% or 3,000 tonnes per annum.

So scarcity is one of the important reasons why gold is the only currency that has survived in history. If we look at the gold price in US dollars since Nixon abandoned the gold backing of the dollar in 1971, the dollar has lost a staggering 98%.

Just in this century, the dollar has lost 85% against real money or gold.  There is no better proof of the total failure of the policies of the Fed and other CBs than the destruction of the currencies. 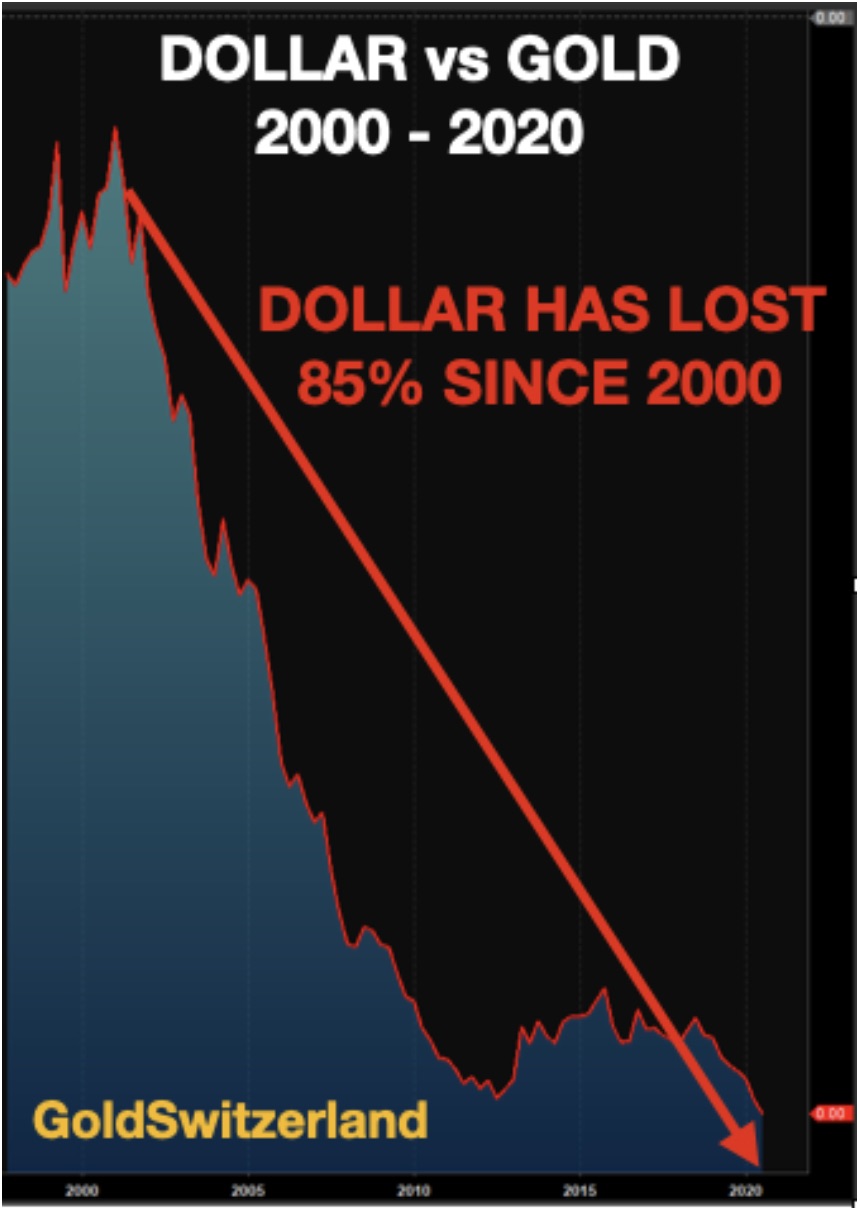 END OF THE END
The world has now entered the final phase or the end of the end of this economic era which started in 1913 with the creation of the Fed.  The beginning of the end was 1971 with Nixon’s fatal decision. The very final phase started in August 2019 when the ECB and the Fed told the world that the financial system is bankrupt. They didn’t quite use those words but their semi-veiled language and especially actions were crystal clear for once.

But this is just the mere beginning. With a bankrupt financial system, an extremely weak world economy and a pandemic on top of that, the Fed and the ECB are totally lost. They are continuing to throw petrol on the fire as if that would solve the problem. But instead of extinguishing the inferno, they are just making it bigger and more dangerous by the day.

DISCONNECT IS COMING TO AN END
The directionless world economy is unlikely to continue to drift endlessly whatever CBs do. On the surface these banks are under the illusion that the world has confidence in them since stock markets continue to defy reality. The disconnect with the real economy continues to get bigger by the day. And the implosion of markets and the world economy are not far away.

Just look at the Nasdaq which is now more than 10x(!!) higher than the 2009 low. It seems that investors believe that the world will just sit at home on benefits and play with their iPhone and iPad, buy things from Amazon they don’t need and then watch Netflix shows all day. 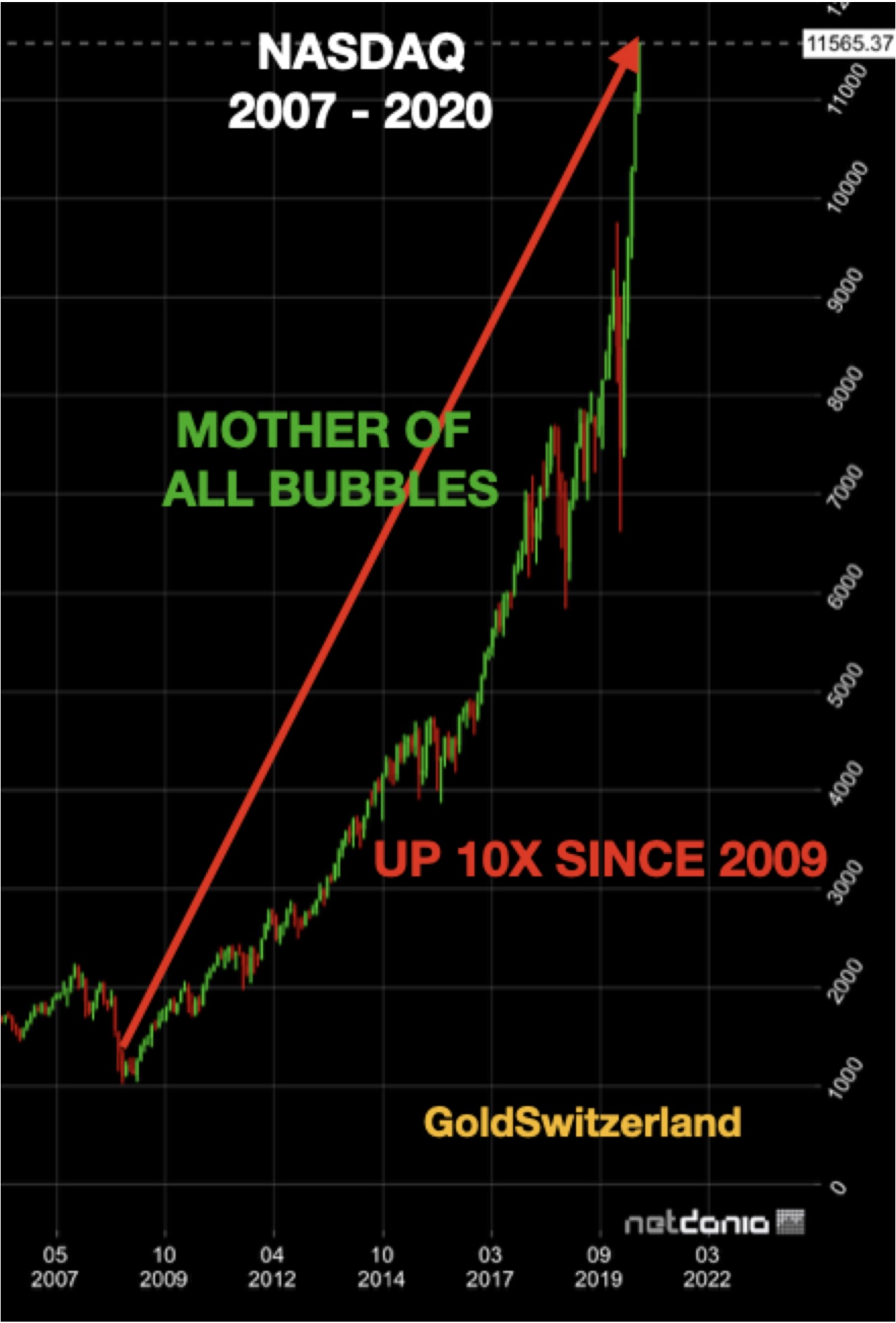 But even if they do, with 30% unemployed in the US they are hardly in a position to support the stupendous valuations of these companies. Netflix is valued at $217 billion with an 83 p/e. It has an infinite multiple of free cash flow since that has been negative to the extent of $11 billion in the last 5 years. Amazon is valued at $1.6 trillion with a p/e of 126!  Many other companies are on p/e’s that guarantees a coming crash will soon take place.

The US government will need to extend the unemployment benefits in perpetuity in order for these companies to justify the current valuations. But not even that will be enough.

INFLATE AND DIE
The legendary Richard Russell coined the phrase “Inflate or Die.” We have, sadly, gone past that point and the world economy is more likely to experience INFLATE AND DIE. But it is not just about inflating or printing money to subsidise the unemployed or ailing companies. The next big phase of QE will be to prop up the financial system on a much bigger scale.

Neither companies nor individuals will be in a position to service or repay loans in coming years. Nor will the government, states, municipalities, etc. Instead, everybody will need more debt to survive.

Credit losses for the banks will be astronomical. Even with current low interest rates, bad debts are increasing rapidly. And most banks have most certainly not yet recognised the problem adequately. The 15 largest US banks have so far set aside $76b to cover bad debts and the 32 biggest European banks €56b.

This is the highest loan provision since the 2006-9 crisis which brought down Lehman and Bear Stearns.  The consultants Accenture estimates that losses from bad debts could rise to $880b by the end of 2022. That would be 2.5x the 2009 loan provisions.

But I doubt that banks have realised the magnitude of the current economic problems. Central banks clearly see the risks. Otherwise they wouldn’t have panicked back in August of 2019.

WILL DEUTSCHE BANK CAUSE SYSTEMIC COLLAPSE?
Just take Deutsche Bank (DB) which is the worst of the lot. They have total assets of €1.3t and equity of €62b. The equity is 4.7% of their total assets. So loan losses of 5% would wipe out their capital. I would be surprised if the coming loan losses would be less than 25% and probably a lot more. And if we add the gross derivatives exposure of $50t, a 0.1% loss would be enough to bankrupt DB.

Now people will argue that gross exposure should be reduced to a much lower net figure. The problem in a crisis is that gross exposure remains gross when counterparties fail. So in the next crisis, DB is unlikely to survive. As one of the biggest banks in the world, DB will have positions with all major banks worldwide. So a fall of DB would most likely lead to systemic collapse with the whole system imploding.

FED AND ECB STANDING BY WITH HELICOPTER MONEY
The Fed and ECB are clearly totally aware of this risk and are therefore standing watch. They will initially do everything in their power which is helicopter money, stopping withdrawals, bail-ins, bail-outs, negative rates, etc.

There is also likely to be a new reserve currency in the form of a cryptodollar, debt moratoria, etc, and a possible reset linked partly to the gold price. This might work for a limited period but will fail in the end. The Chinese and Russians will not agree and will challenge the US financial solidity as well as the real level of their gold holdings, which is likely to be substantially below the declared 8,000 tonnes. The second reset will be disorderly and this is when the banking system will not survive in its present form.

At that point the world will realise that the central banks have totally lost control of the system as the money they are printing will be recognised as having ZERO value.

“And there is nothing they can do” as Bowie said.

POLITICAL DISARRAY AND ANARCHY
When we reach that point, governments will also be in disarray and  powerless for most of the time. The people will always back the opposition parties which will promise the earth but when they gain power deliver very little. So government changes will be frequent and there will be periods of anarchy.

A dark scenario but the die is already cast and I cannot see any chance of avoiding “a final and total catastrophe of the currency system involved” — (von Mises).

I clearly hope that this scenario won’t happen but the chances of avoiding it are slim. It is only a matter of the degree and severity of the collapse.

It is not easy for ordinary people to protect themselves against financial Armageddon. Financial protection in the form of physical gold and some silver is absolutely essential but that is only a small part of things to prepare for. The most important support is a close family and close friends, and also appreciating non-material and virtually free values such as nature, books, and music. The effects on markets and money will of course be dramatic but more about that in another letter…For those who would like to read more of Egon von Greyerz’s fantastic articles CLICK HERE.