Greyerz – This Man’s Predictions For The World Are Absolutely Terrifying

As the world edges closer to the next crisis, today the man who has become legendary for his predictions on QE and historic moves in currencies told King World News that this man’s predictions for the world are absolutely terrifying.

One Of The Most Critical Crossroads In History
February 17 (King World News) – Egon von Greyerz:  Is a total collapse of the financial system next or will we see the globalists taking control of the world? Either way, the world is now at one of the most critical crossroads ever in history. Shakespeare expressed it eloquently in Julius Caesar:

There is a tide in the affairs of men.
Which, taken at the flood, leads on to fortune;
Omitted, all the voyage of their life
Is bound in shallows and in miseries.
On such a full sea are we now afloat,
And we must take the current when it serves,
Or lose our ventures.

One of the brightest minds in finance RE McMaster, has summarised the next 25 years as follows:

Furthermore, this is his prediction for the USA:

The US is headed for economic and social chaos in the cities particularly and a federal government declaration of martial law. Both the US military and police have been preparing for this. Witness the recent US military exercises held in Los Angeles. Urban warfare is coming.

The above forecasts are horrific and hard to believe. But they were made by a moderate person with an immaculate 40 year track record and must be taken seriously…

Elite Continue Implementing Globalist Agenda
Egon von Greyerz continues:  “It seems clear that the elite is working hard on their globalist agenda to assume control of the world. If they achieve what they have set out, as outlined above, life on earth will be extremely unpleasant to say the least. Also, there will be nowhere to hide.

But even the best plans can go badly wrong. The most likely spanner in the works for the elite will be a total collapse of the financial system. This would involve first a final round of money printing creating hyperinflation in most Western countries as well as in emerging markets. But this will have no effect as the world discovers that worthless pieces of paper or computer entries cannot create eternal prosperity.

After a brief hyperinflationary phase, we will see an implosion of the financial system when global debt and liabilities of at least $2 quadrillion currently, disappears into a black hole. As the debt implodes, so will all the bubble assets financed by the debt, including stocks, property and bonds.

So the world is not in the position to take the flood that leads to fortune. Sadly whatever current the world takes will lead to miseries. We are now in a LOSE – LOSE situation and it will be a question of the least painful outcome.

Since the world cannot choose which way to go, we must look at the most likely option. Personally I believe that a collapse of the financial system and the world economy is more likely than globalist control of the world. You could argue that the globalists will orchestrate the collapse and take advantage of the anarchy which will arise to take control. But I think that the coming disorderly reset of the world economy will be impossible to control by any individuals, state or military power.

So the coming years and decades will be horrific whichever path the world takes. A reset is totally necessary for the world to start the next growth phase. We need a global fire that burns the current system down to the ground. Only from that position can we get strong green shoots that will form the foundation for a healthy growth of the new world economy.

The advantage with the fire is that it will also destroy the decadence as well as the false values and false morals which have become rampant in the last few decades.

The suffering that we, our children and grandchildren will go through during this period of transition will be horrendous, but sadly it will be necessary in order to give the world a chance to eventually take the right current.

It is with no pleasure I discuss the above alternatives for the world. I obviously wish that the outcome of the mess we are in now could treat the world more gently. But I cannot see another realistic solution. Possibly that would be Deus ex Machina, which I discussed many years ago in an article. This is from the old Greek plays when god was lowered down on the stage in a little machine or basket and solved all the problems. But unfortunately I think that this is a very unlikely solution to the problem we are in.

So let’s finish with some more uplifting news for the ones who understand the importance of wealth preservation or insurance against the current risks in the world economy and financial system. In my KWN article last week I talked about the Gold Maginot Line. Gold in US dollars has not yet broken the important $1,350 line but is now on its way, finishing at $1,320 last Friday.

Important moves often start in the periphery. As the chart below shows, Gold in Swiss francs broke out of the same line last week and is now on its way to new highs. 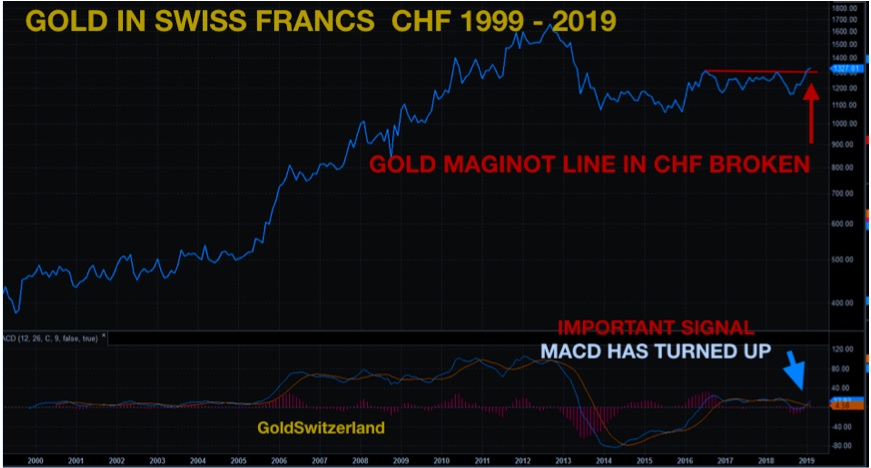 And Gold is now breaking out to new all-time highs in a number of currencies, including the Swedish and Norwegian krona, Canadian and Australian dollars, and many more. In Venezuela gold was 200 bolivars in 2000 and now it is 327 million. In Argentina gold was 270 pesos in 2000 and now it is 50,000. We are likely to see these hyperinflationary levels in the West in coming years.

As I discussed in my KWN article last week, the time when gold can be bought at current levels is quickly coming to an end. And we might get to the point when gold, due to shortages, cannot be bought at any level.

Finally, remember that gold is the only currency that has survived in history. A 5,000 year old tradition will not change whatever governments or globalists try to achieve. 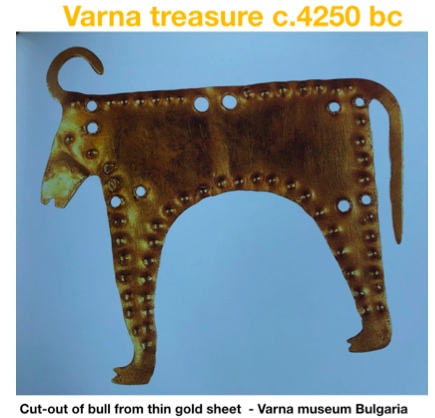 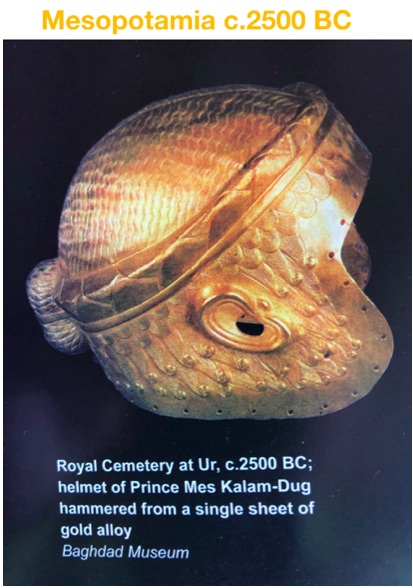 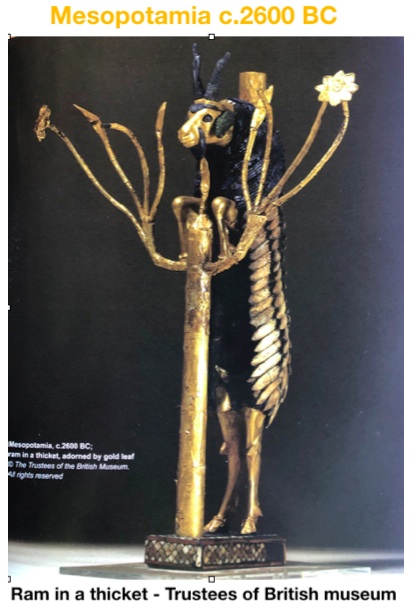 ***KWN has now released the powerful audio interview with Andrew Maguire CLICK HERE OR ON THE IMAGE BELOW.

***Also just released: Andrew Maguire: This Is What Is Happening Behind The Scenes In The Gold Market CLICK HERE TO READ.