As we kickoff a other trading week, we are now in the greed phase of the bull market, but look at this…

“Greed is all right, by the way. I want you to know that. I think greed is healthy. You can be greedy and still feel good about yourself.” — Ivan Boesky speech, 1986

“The strangest thing, when we come to look back, will be not just that Ivan Boesky could say that at a business-school graduation, but that it was greeted with laughter and applause.”

On November 15th of that same year, Boesky agreed to pay a $100 million penalty to the Securities and Exchange Commission for illegal insider trading. He was barred for life from the American securities industry. And Rudolph W. Giuliani, the U.S. Attorney for the Southern District of New York, said Boesky had agreed to plead guilty to one criminal charge. The following December 19th, Boesky was sentenced to a three-year prison term for conspiring to file false stock trading records.

Eight days earlier in that holiday season, Oliver Stone’s Wall Street was released in U.S. theaters. In that movie, Gordon Gekko said, “The point is, ladies and gentlemen, that greed is — for lack of a better word — is good. Greed is right. Greed works.” “Greed is good” is one among many constantly misquoted movie lines. It is also what continues to drive Wall Street, the real one, not the movie.

In the first half of March, as the world was melting down, insider buying (orange bars) outpaced sales by the most since 2011. 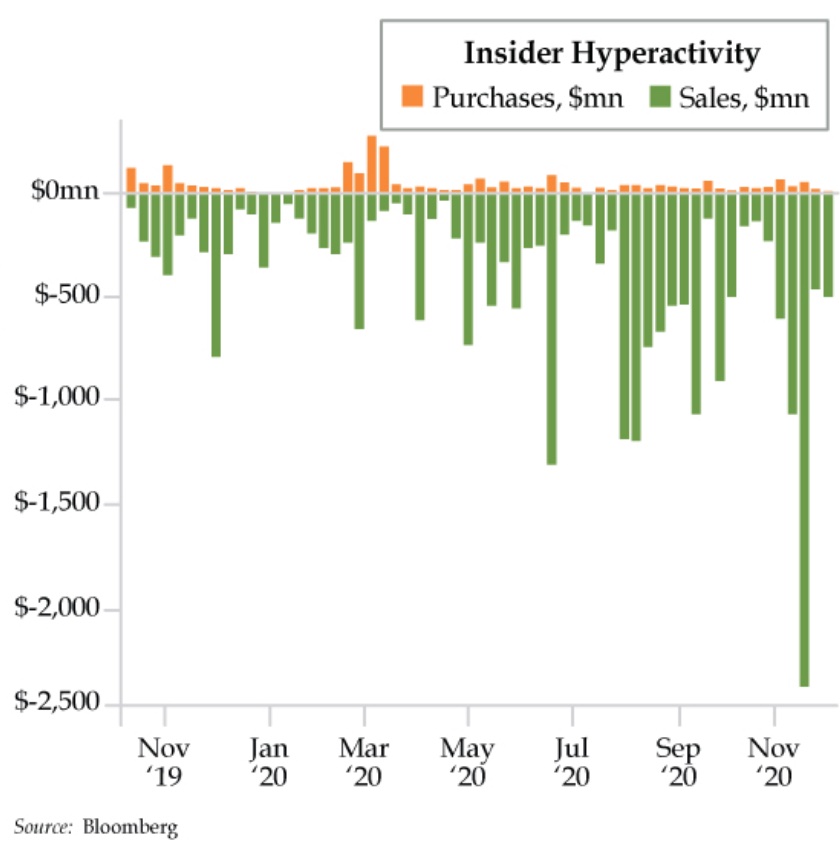 In the week that followed, the S&P 500 fell 15%, its worst one-week showing since 2008. This prompted the Federal Reserve’s unprecedented rescue mission. Stocks haven’t looked back since. Insiders, however, have spent a good bit of time peering into the rearview mirror, racking up profits on their soaring stocks by selling (green bars) their shares at a fevered pace.

As the post-election rancor rose, in the week ended November 20, at $2.21 billion, insider selling was so pronounced, the above right-hand chart had to be rescaled. … You may have noted Friday morning’s upside surprise in the University of Michigan Consumer Sentiment preliminary December data. The 81.4 headline print, up from November’s final print of 76.9, blew past Bloomberg’s median projection of 76 and topped all estimates…

…A closer look reveals less in the way of household optimism. At 1.5%, median income expectations have fallen back to September levels. Granted, this is well above April’s 0.4% low, but it’s a far cry from February’s pre-COVID 2.2%. This metric had been improving, rising from the spring to October’s 2.0%, but we’ve since relapsed.

Income expectations key off job prospects which, by definition, follow the confidence of C-Suite occupants, one in the same with those insiders dumping their shares. As for what drives this tony cohort’s confidence, gauged by the Business Roundtable CEO Economic Outlook Index (yellow line), it’s the stock market, depicted here with the S&P 500 (blue line). 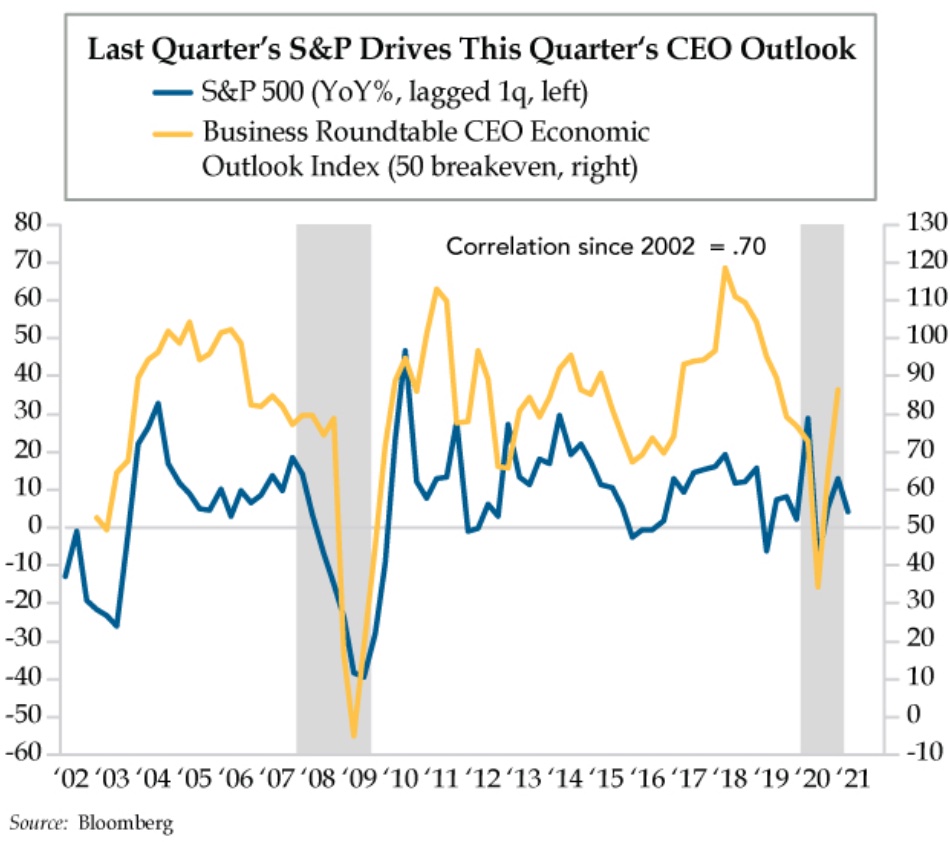 At the risk of being overly simplistic, in data back to 2002, CEO confidence and stocks, lagged by one quarter, have a .70 correlation. For the record, values between 0.7-1.0 indicate a strongly positive linear relationship.

What’s not pictured is mergers and acquisitions (M&A). October deal count tied for the second highest in history. But it’s November, as insider selling spiked, that saw executives pay the second highest average premium on record to deploy the inflated currency of their share prices to buy revenues.

That brings us back to the notion of greed. In a June, 2020 study of Bloomberg Automated Intelligence on 5,000 companies in the two preceding years, Bloomberg quantitative analysts found that, “20% of the time, through its automated news, certain combinations of alerts — including stock trading, social media activity and credit default swaps — were followed by a mergers-and-acquisition announcement in five days. The ratio is triple the outcome if all anomalies were to occur randomly.”

With a hat tip to QI amiga Philippa Dunne, at 33, Shiller’s cyclically adjusted price-to-earnings ratio on the S&P 500 is in the 98th percentile of valuations in data back to 1881. Insiders clearly appreciate how richly valued shares are. As for any temptation to engage in illegal insider selling, while greed taken to such extremes is not “healthy,” in hindsight, it would nevertheless be easily understood.

Gold Battle Raging At $1,800, Plus Inflation Shocker And Massive Layoffs