With continued uncertainty around the globe, today the man who has become legendary for his predictions on QE, historic moves in currencies, told King World News that the Alice In Wonderland fantasy is about to come to an end.

Propaganda And The Ugly Truth
November 5 (King World News) – Egon von Greyerz:  “The facts just don’t add up. The US Government has managed to publish a number of contradicting employment figures that make no sense whatsoever. For example, US Consumer Sentiment is the highest in 13 years…

Egon von Greyerz continues:  “At the same time US October Household Employment Survey dropped 484,000 and the Labor Force shrank by 765,000. But due to manipulation of the figures, October payrolls increased by 261,000 and the Unemployment Rate declined to 4.0% from 4.2%. The Labor Participation Rate is down to the 1977 level, with only 62% of the population employed or looking for work. How can anyone believe any of these figures that tell us Payroll increased and Unemployment declined at the same time as Employment and Labor force went down substantially? It must all be pure fantasy.

The Labor Participation rate is down from 67% in 1999. The problem with US labor statistics is that they conveniently disregard the 95.4 million people, a record level, who are able to work but are not working. The total US labor force which is capable of working is 256 million. Of those, 161 million are actually working or actively looking for a job. This means that the 95.4 million, many of which have given up looking for a job, represent 36% of the all those capable of working. So with fewer people working and with average workers’ real pay having declined since 1975, it is hard to accept that people in the US are feeling so optimistic. 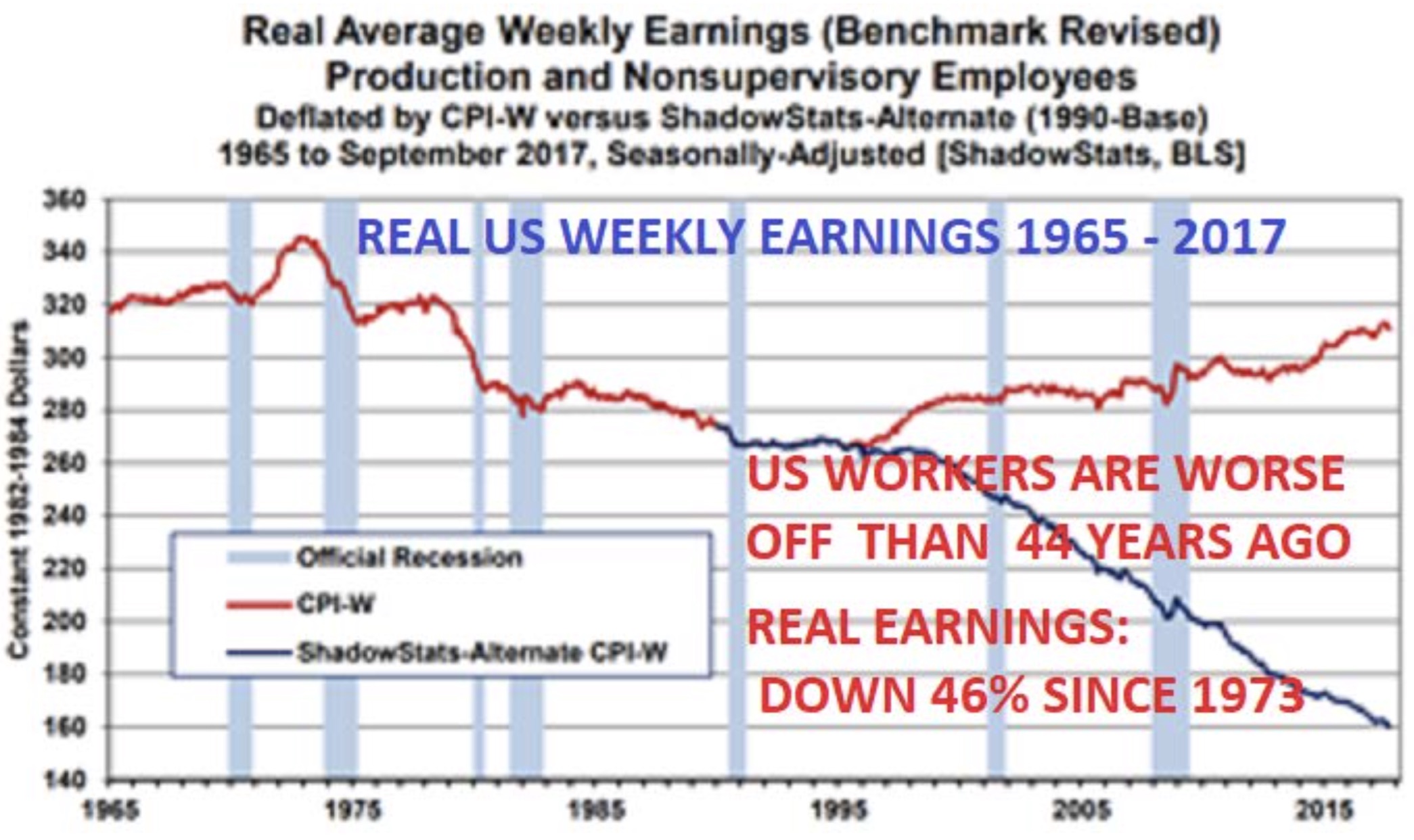 My Visit To The US
Having recently visited the US, it is difficult to understand that the US consumer is the most confident in 13 years. I visited a few shopping malls, including a major mall in Boca Raton, Florida with all the major department store chains plus all the speciality chains. Boca is an affluent area, but virtually all stores were dead with lots of staff who had nothing to do. There was only one store that was packed which was Apple. The Microsoft store was also totally empty. 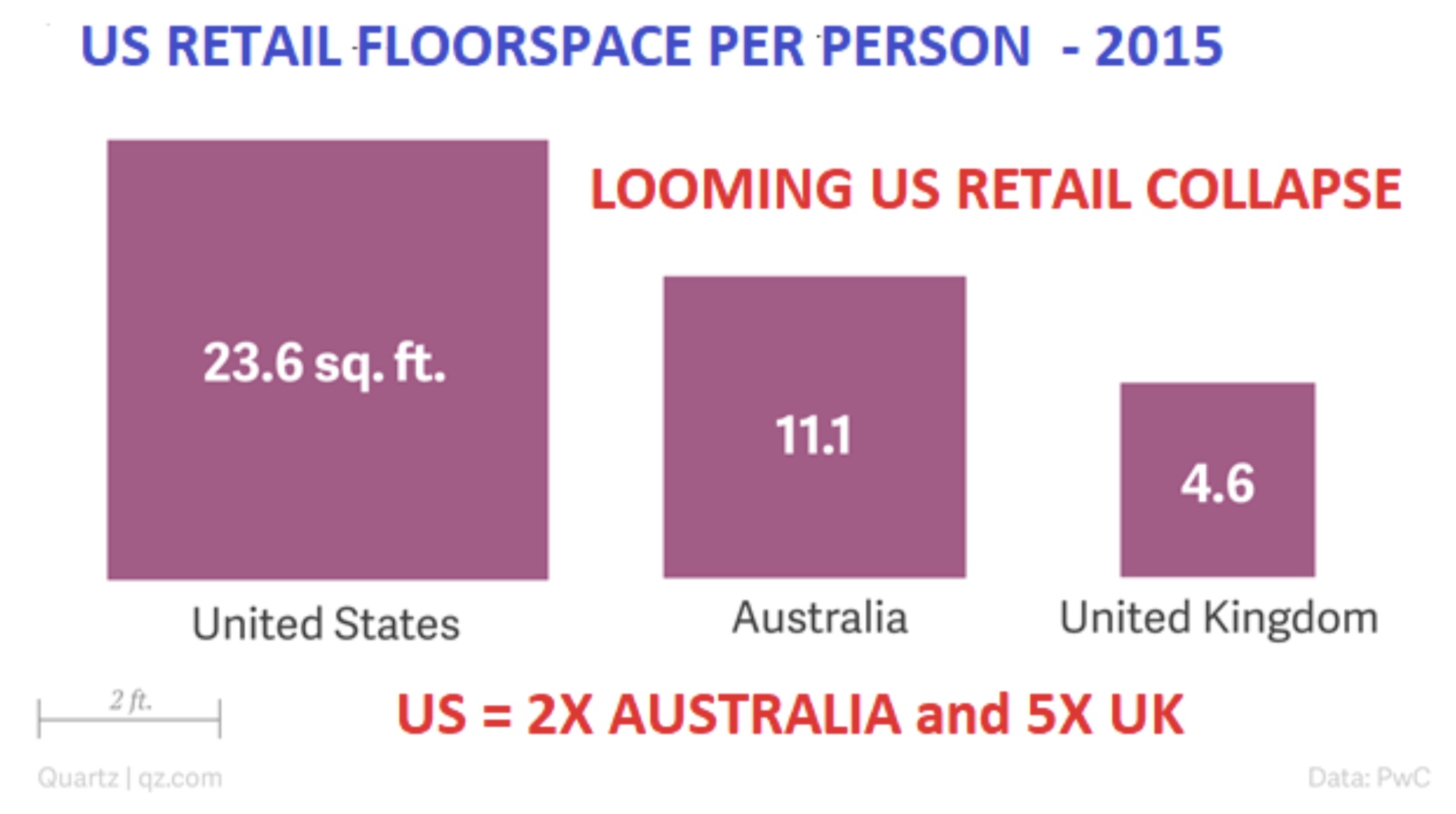 The state of US retailing is clearly dire with 5X as much retail space per person as in the UK, a country which is also over shopped. With 6,700 planned closures, so far, in 2017, this industry is clearly hemorrhaging.

Retail is being hit by the decline in real disposable income and also the development of online sales. Although the Amazon valuation has looked ridiculous for many years, maybe it is justified as this company eventually will have a total monopoly in many areas of retail with the exception of some specialty chains such as non-branded fashion. 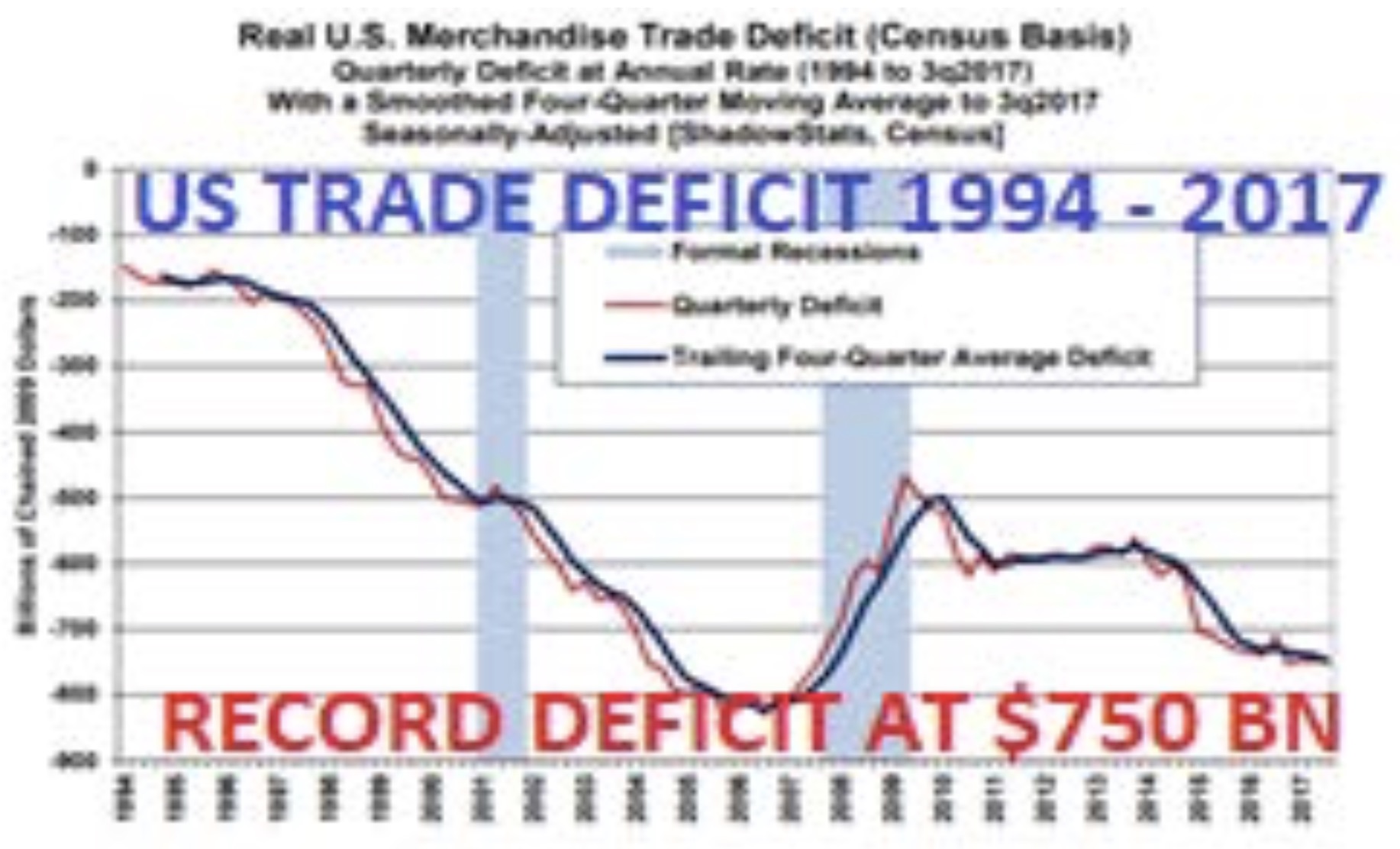 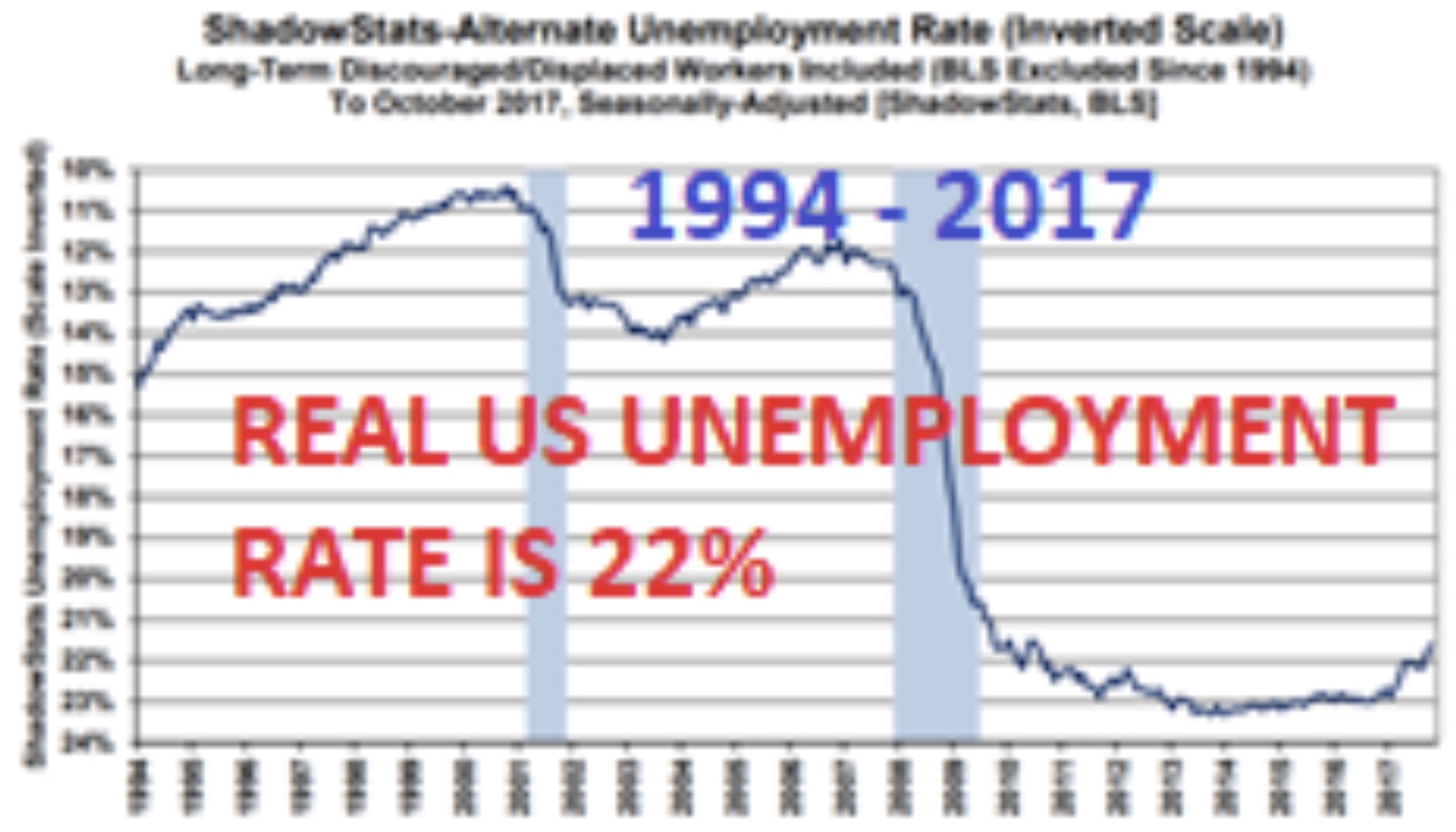 Alice In Wonderland
Either Americans are misled by the continuous bubble highs in stock markets or by the government propaganda, which the media, without analysis, just publishes as facts even though virtually all of it is Alice in Wonderland fantasy. Or maybe the bullish Consumer Sentiment figures are just as fake as most of the figures produced by government. How else can the official unemployment figures be 4% when according to John Williams of Shadowstatistics it is 22%?

As the British Prime Minister, Disraeli stated: “There are Lies, Damned Lies and Statistics.” But markets love these lies since they continue to drive valuations exponentially higher whether it is the FANG stocks or cryptocurrencies.

The US working population of 154 million has the responsibility for the US total debt which currently is $70 trillion. That excludes unfunded liabilities of anywhere from $120 trillion to $200 trillion, which also must be funded. But if we just take the $70 trillion debt, that amounts to $454,000 of debt for each person working. Adding the unfunded liabilities, we are looking at anywhere between $1.2 and $1.7 million debt per US working citizen. Since the average US person is one wage check from bankruptcy, they are hardly in a position to pay anywhere from $454,000 to $1.7 million on an average gross wage of less than $50,000.

So everyone knows that the US, like the rest of the world, is bankrupt.  But who cares with stock markets and Consumer Sentiment at highs. Every new President or Chairman of the Fed just hopes that nothing will happen on their watch.  In the meantime, they will just print as much money as possible, so they can pass the parcel to their successors.

But at some point, the music will stop and someone will get stuck with the parcel. And this parcel includes total debt and liabilities, including derivatives, of $2 quadrillion. Anyone who gets landed with such a parcel will print money in the quadrillions. Or perhaps he will just issue cryptocurrency backed SDRs. Maybe the world at that point will value the 21 million bitcoins at $95 million each. This would take care of the $2 quadrillion debt. At that point, we will most likely also see elephants fly and many other miracles.

Hitting The Wall
The coming global financing requirement hardly rhymes with central banks reducing global liquidity by $2 trillion by the end of 2018 and more thereafter. The coming collapse of stock and bond markets in 2018 will force central banks into a massive about face. But at that point the added liquidity will have no effect. The world will then have reached a point when printing worthless fiat money will no longer have any effect. And why should it? If money printing could create real wealth, why would anyone ever work?

The Fed is of course not the only central bank that is conducting a disastrous policy. The Swiss National Bank (SNB), which used to be a bastion of safety and conservatism, is now the world’s biggest hedge fund. The balance sheet of the SNB continues to explode and is up 9% so far in 2017 as at the end of September. Total assets of the SNB are now CHF813 billion (same in $). That is 123% of Swiss GDP and bigger than the central bank of Cyprus when it went under. A massive CHF760 billion is held in foreign currency positions. CHF90 billion of that is in stocks, most of it in US stocks such as Apple, Alphabet (Google), Microsoft, Facebook and Amazon. CHF670 billion is in currency speculation, mainly euros and dollars. With stocks rising and the Swiss franc weakening against the euro and the dollar, the SNB has done well in 2017. But they are unlikely to get out of these positions when stocks in euros and dollars collapse, creating massive losses and more money printing. At that point, the Swiss franc will compete in earnest with other major currencies in the race to the bottom.

No wonder stocks are going up when most central banks including the ECB, SNB and the Bank of Japan are printing masses of fake money and buying stocks in the $100s of billions. What they are doing should be classified as criminal but central banks stand above any law, like many US investment bank chiefs.

Standing At The Edge
We are standing at the edge of a precipice and very little is required to push the world over the edge. Just like in 1929 or in 1987, it will come out of the blue with no one being prepared or having the time to react. Since markets for decades have been saved by central bank printing, investors will initially see any decline as a buying opportunity. But any liquidity injection by central banks will have a very short-term effect, just like when JP Morgan declared after the Black Tuesday crash on October 29, 1929, “I am buying.” The effect was extremely short lived, and the Dow continued to decline by 90% before reaching the bottom. The fall in the next few years will be of the same magnitude and the reverse of the exponential moves that I discussed in last week’s KWN article.

With most markets at highs, gold buying is very subdued in many countries like the US. It is hard for investors to avoid the seductive powers of surging stocks and cryptocurrencies. But German gold buying is very strong.  As usual, Russia and the East continue to absorb most of the annual scrap and mine production regardless of price. 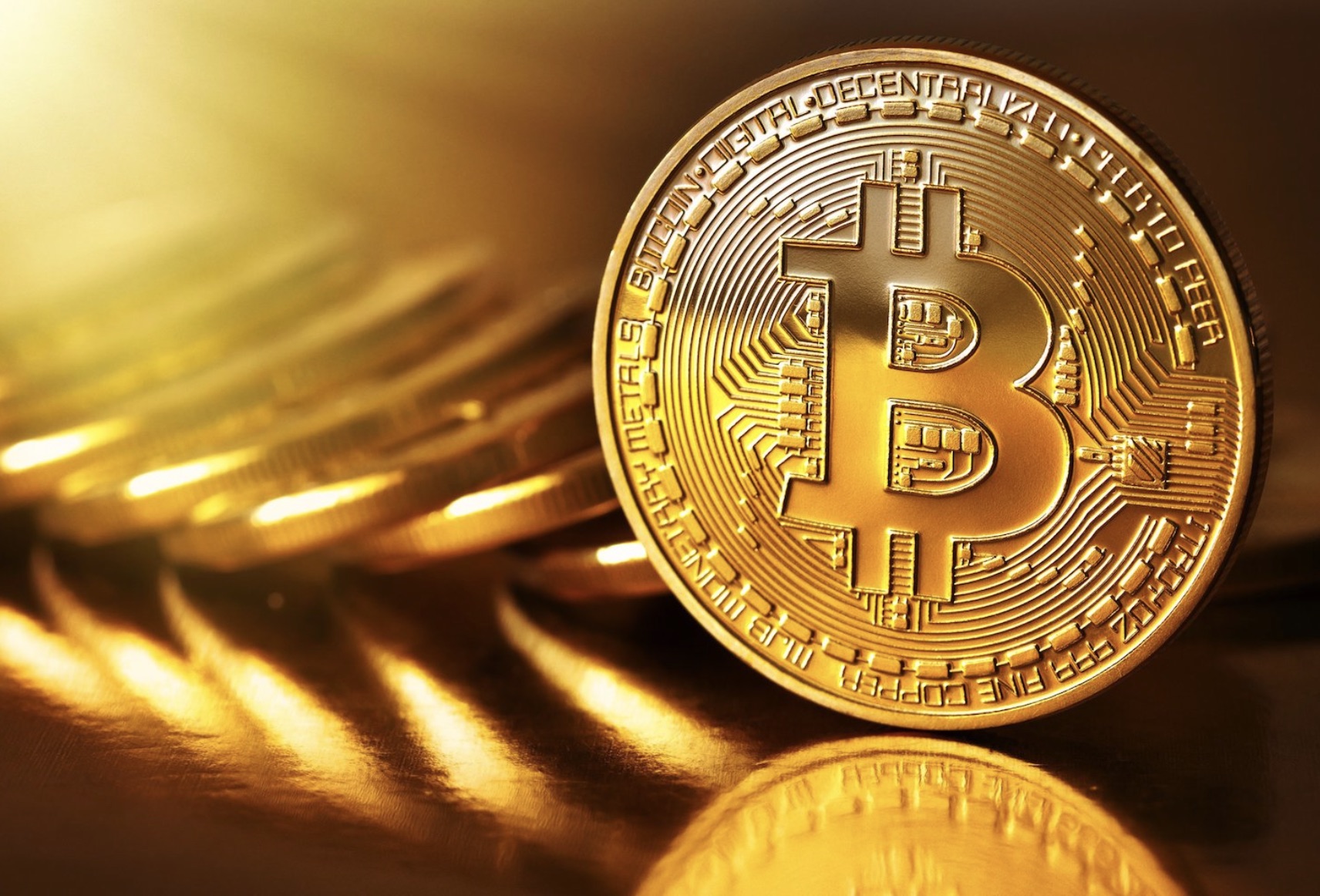 When confidence turns, and fear returns to markets sometime between now and 2018, gold and silver will surge. And due to lack of supply, very few investors will be able to buy physical gold and silver. For the few who then will be lucky to get hold of supply, it will be at levels which are multiples of current prices. The time to think of wealth preservation and to buy insurance is today when physical gold and silver can be found at very low prices. At some point, the gold and silver price rises will dwarf the current surge of Bitcoin, and to be left behind will be a fatal mistake.”