What we are seeing is unparalleled in history but here is the good news.

May 2 (King World News) – Kevin C. Smith:  We are currently experiencing profound changes in the global economy that are likely to unleash a plethora of early-stage secular trends in a new inflationary regime. These are long-overdue structural shifts powered by decades of easy money policies and record levels of debt-to-GDP among developed economies:

Unparalleled to any other time in history, the current macro imbalances have drastically distorted the market perception of value and risk. This scenario is setting the stage for significant changes in portfolio allocations from crowded and overvalued assets to unloved and historically cheap alternatives. For macro investors, we think this is one of the most opportunistic times ever…

Let’s dive in on each of these themes to share our detailed views about the global economy.

Natural Resource Under Investments
If there was ever a time to own tangible assets and businesses that benefit from the appreciation of these underlying assets, that time would be now. Ultimately, the sustainability of commodity bull markets is predicated on the spending trends for natural resource industries. By and large, these are long-term cycles that take time to reverse. Years of misallocation of capital, equity dilution, corporate mismanagement and money-losing operations have now turned into excessive conservatism. When adjusted for GDP levels, the aggregate capex for commodity producers remains lower than it was in 2003, almost 20 years ago. 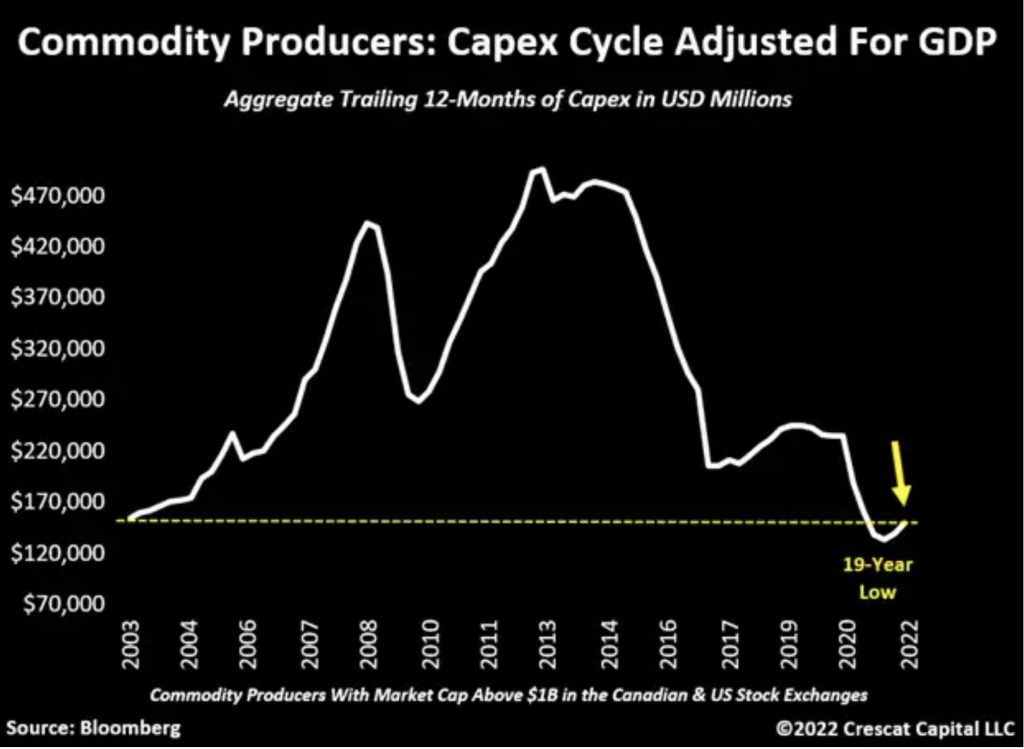 Cash-Flow Machines
Natural resource industries are now generating more free-cash-flow than any other time in history. To be exact, they reported three times more annual free-cash-flow than their historical peak. While these companies have turned into incredibly profitable businesses, they have yet to become new darlings for investors. 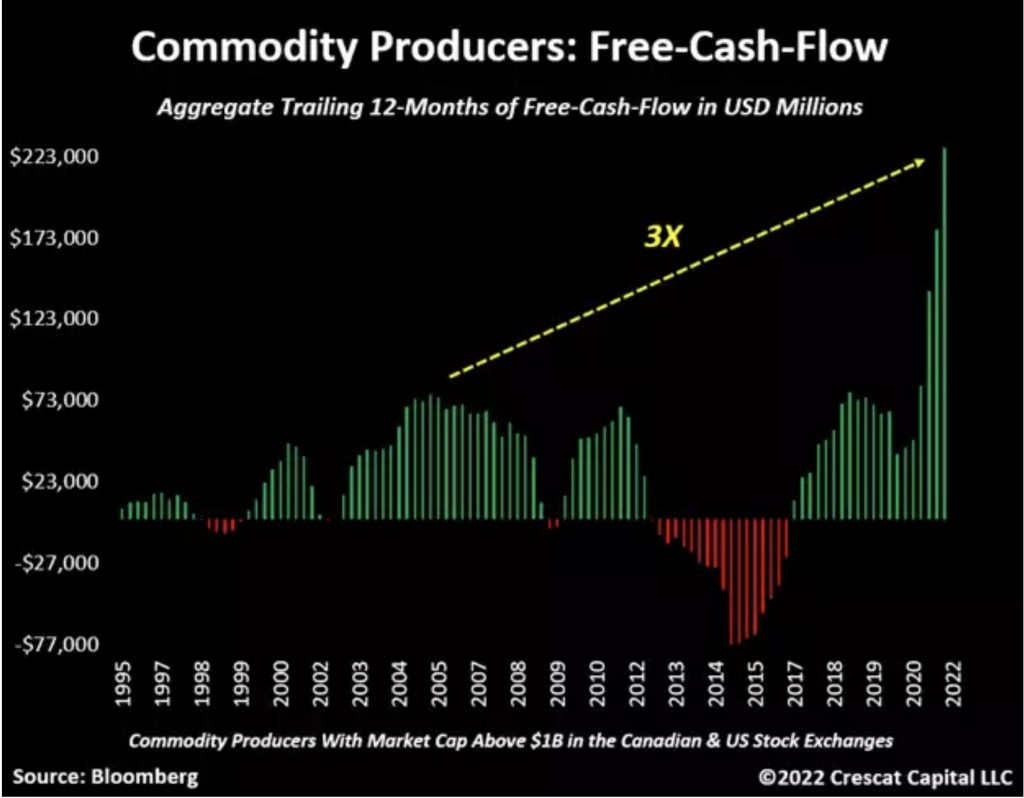 Early Signs
Commodity producers remain so financially restrained to invest in their businesses that they are almost giving more capital back to shareholders than what they spend on CAPEX. In the last year, nearly 30% of the cash flow from operations generated by these companies was spent on dividends and share buybacks. The chart below reflects how natural resource industries are more focused on attracting investors by these shareholder friendly actions than through trying to grow their businesses. This is a classic sign of a commodities cycle in its early innings. 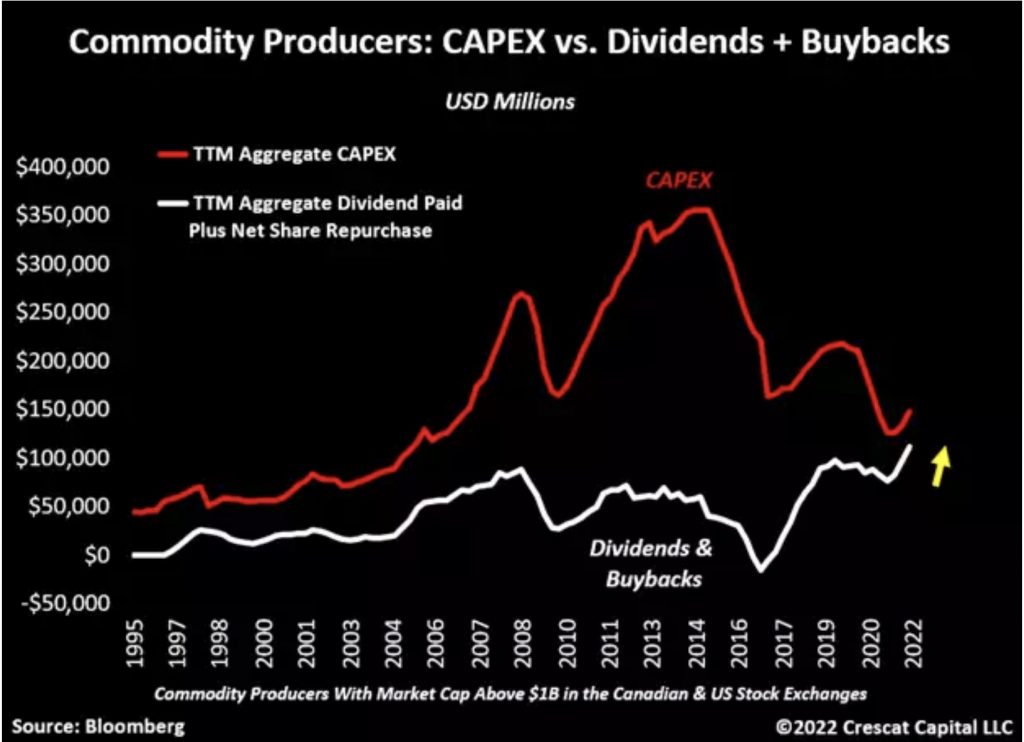 How can anyone claim commodities are overextended when prices relative to overall equity markets remain near 50-year lows? Every time we reach such suppressed levels in this ratio it marked the beginning of commodities cycles. The chart below is an incredible illustration of the opportunity still ahead of us. The credit goes to our good friends at Incrementum AG for always providing outstanding research. 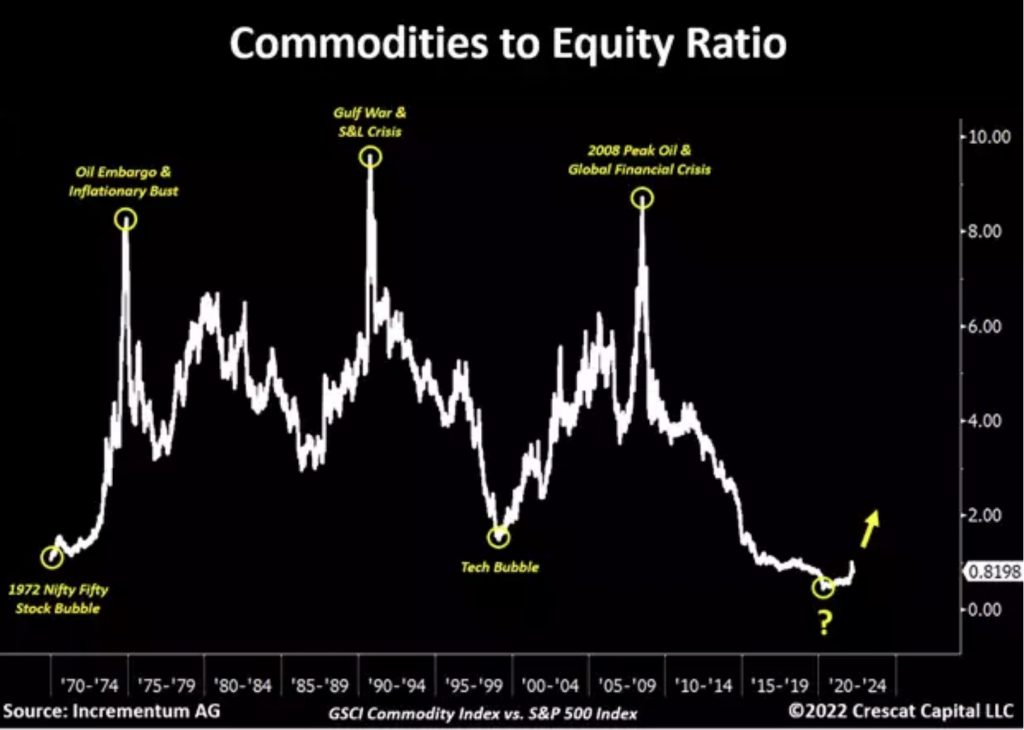 In our Global Macro, Long Short and Large Cap strategies, we hold a large and diversified position in raw materials businesses on all fronts, including metals, energy, agriculture, and forest products. On a side note, we do think that gold and silver miners, more than any other natural resource industry, are overdue for a major catch-up with their peers.

Here is one interesting fact to consider: precious metals mining companies are not only the most profitable they have ever been in history, but they also have the strongest operating margins among all other commodity producers. That is despite the recent increase in energy prices and surge in labor costs. 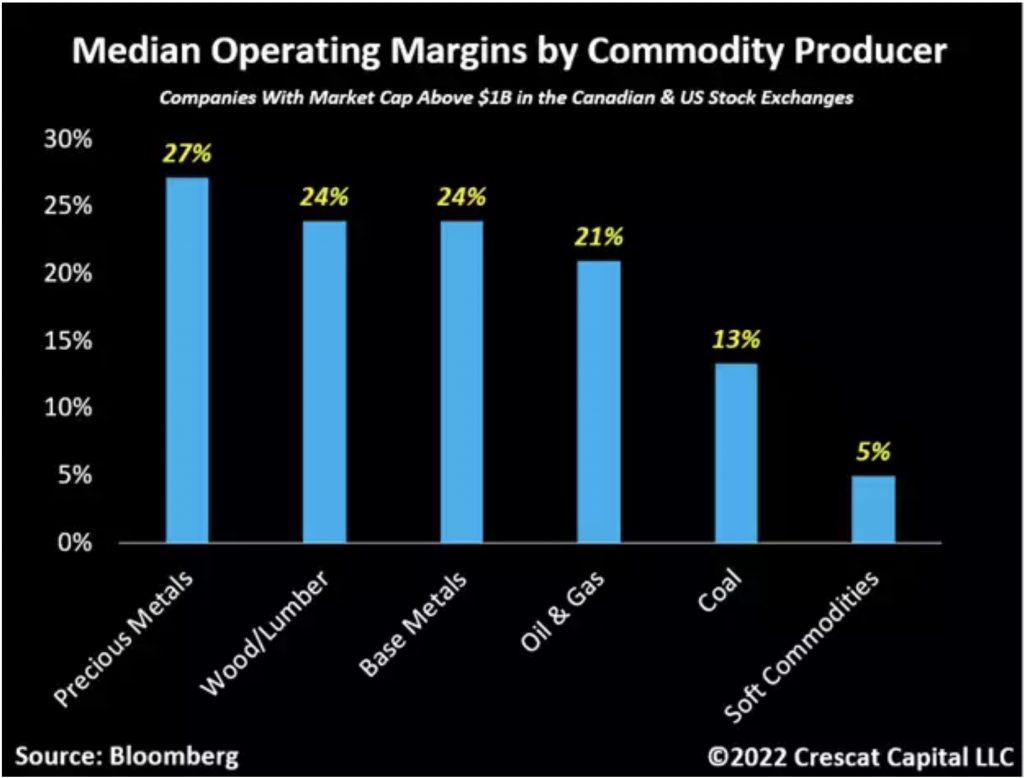 Silver remains one of the most mispriced opportunities in financial markets today. While the overall commodities market has drastically risen, this high-beta version of gold remains at historically cheap levels. If silver were to just catch up to the move in other tangible assets, it would imply a doubling from current levels. 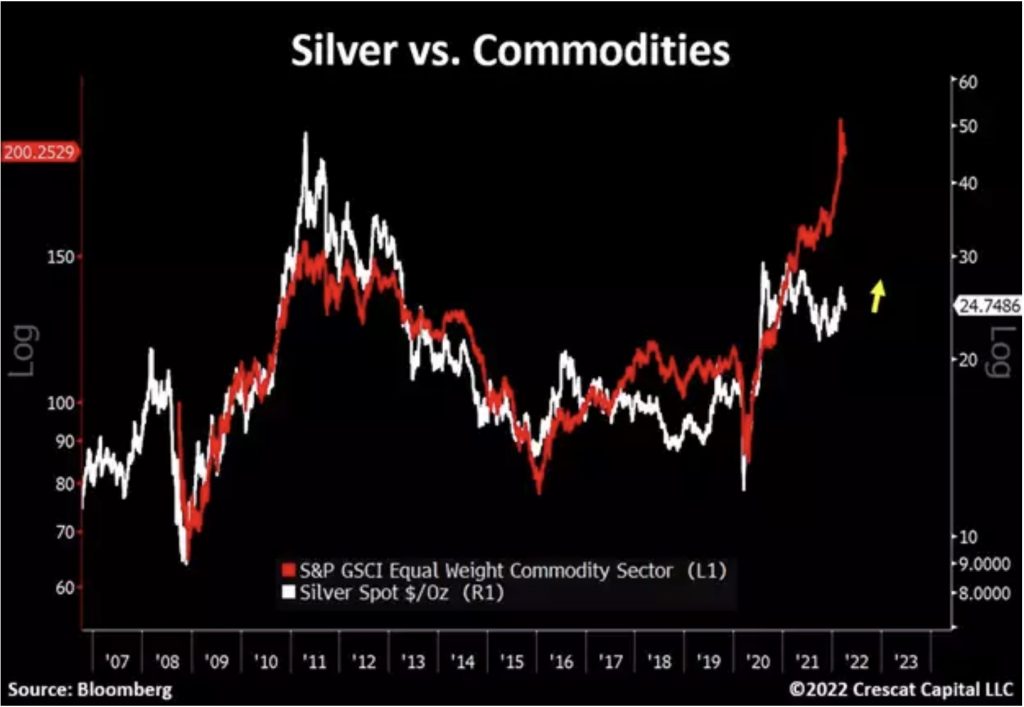 Precious metals companies have been performing incredibly well recently despite the significant rise in US Treasury yields. Remarkably, the industry has underperformed gold prices for over 26 years. With rising profitability, balance sheet improvements, extreme capital spending conservatism by corporate management, there is so much value still to be unlocked in this industry. 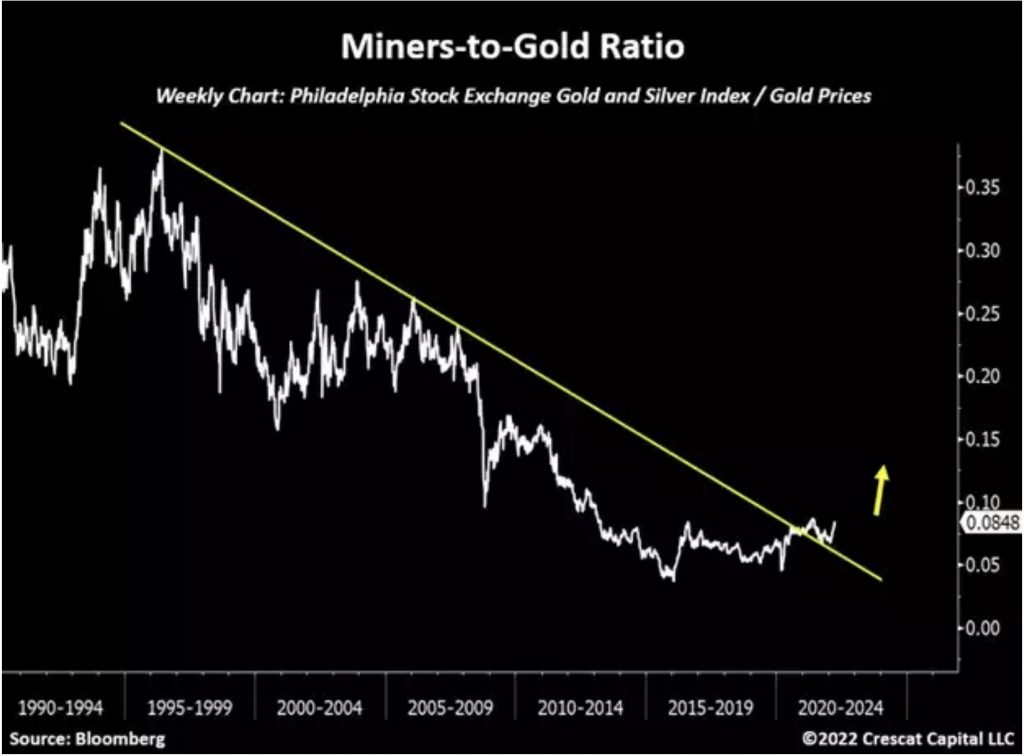 Maiden discoveries are the most exciting and rewarding events that can happen in a junior exploration company – this discovery happened on the last hole of the first ever drill program and there are no drill holes around it yet. The next major step is to see how big and how rich the discovery gets when we resume drilling shortly. Also of major importance is the address of where Torq’s project is, fortuitously in Chile where some of the largest mines and discoveries have been made recently and globally. Furthermore and very importantly the Margarita project is located only 65 km from Copiapo the major mining center in Chile, is located only 2 km off paved access and being located at low altitude can be accessed and worked on 12 months a year.

We now have two major exploration projects in Chile with discovery holes.

A Message from Shawn Wallace, Executive Chair:  “This copper and gold discovery drill hole is a remarkable success for Torq. After only acquiring the Margarita project a year ago, our team was able to uncover the potential for an entirely new IOCG deposit in Chile from its maiden 13-hole drill program on a project that had never been drilled before. We are incredibly impressed by the work of our technical team and their ability to move quickly and methodically in recognizing the opportunity at Margarita at an early stage and then delivering the kind of results all exploration companies strive for. We are now diligently preparing for a follow-up drill program and will update shareholders and stakeholders of our plans in the very near future.”

A Message from Michael Henrichsen, Chief Geological Officer:  “In the first ever modern drill program at the Margarita project, the Company has demonstrated the true potential of the property with a meaningful discovery. The mineralization has a clear signature over a 1 km strike length, and we believe there is significant potential for the project to host a substantial mineralized body. We greatly look forward to the second phase of drilling this summer when we will aim to outline a world-class IOCG deposit.”

A Message from Waldo Cuadra, General Manager of Chile:  “Rarely does an exploration team on its first drill program achieve noteworthy success with the discovery of a significant mineralized section. The Margarita project has the potential to be Chile’s next major IOCG discovery, and after a long process of monitoring this project over the years, it is very gratifying to drill Margarita successfully with a team of experienced and motivated geologists as well as the full support of our executive team in Vancouver. I am proud to lead our team of geologists in Chile toward our objective of defining an IOCG – type deposit.” Torq Resources, symbol TORQ in Canada and TRBMF in the US.

ALSO RELEASED:  Greyerz – Global Chaos Will Increase As The World Is Now Standing On The Edge Of A Precipice CLICK HERE.

Egon von Greyerz’s Partner Matthew Piepenburg gave an absolutely incredible interview about the coming chaos investors should expect to see in terms of inflation and major markets as well as gold, silver, and what people will need to do in order to protect themselves from the coming upheaval in global markets. I would encourage everyone around the world to listen to this remarkable interview by CLICKING HERE OR ON THE IMAGE BELOW.

To listen to Alasdair Macleod discuss Russia backing the ruble with gold and why the price of gold’s rise will be unstoppable CLICK HERE OR ON THE IMAGE BELOW.