As the world edges closer to the next crisis, today the man who has become legendary for his predictions on QE and historic moves in currencies told King World News that sources close to former French leader, Charles de Gaulle, informed him that de Gaulle was certain the United States had no gold left.

A Prediction Of Things To Come
January 28 (King World News) – Egon von Greyerz:  “This old nursery rhyme, or counting game, dating back from the late 17th century, could be seen as a prediction of things to come. Many people from various backgrounds could soon realize that they may become a poor man, beggar man or thief, within the next 5 to 10 years as the world experiences a massive wealth destruction.

Tinker used to be someone who travelled around to mend pans and utensils. The verb tinker also means to tamper with or manipulate. No one should be under the illusion the powers that be are not tinkering the world economy. No, the tinkering that is going on tells us that we are now in the very final stages of the biggest manipulation or rigging of the world economy, markets, gold, news, politics, people, etc, that the world has ever experienced…

Egon von Greyerz continues:  “Since this level of manipulation has never, ever occurred in history, no one can predict the magnitude of the collapse that will take place. Even worse, 99.99% of the world’s population is totally unprepared for what is going to come. And even the minuscule minority who are predicting a cataclysmic event will not evade the suffering that will follow.

Like A Thief In The Night
No one knows where or how it will begin. It can start with a slow decline in the economy and markets or there could be a sudden and sharp drop, taking everyone by surprise. What is certain is that the consequences will be devastating for the majority of people. Many will lose their jobs, social security benefits, pensions, medical care, and all the normal supports that they have been used to.

Also, very few realize that the high standard of living in the West in the last many decades has nothing to do with real economic growth or productivity. Instead, it is all based on debt and printed money to the extent of at least $500 trillion including unfunded liabilities such as medical care and pensions.

A rigged world economy based on debt has no foundations and no reserves. The bubble can be expanded for a limited time by just issuing more debt and this is what we have seen since the 2006-9 finicial crisis. The fake life support that the world economy has received in the last 10 years in the form of an additional $125 trillion of debt has inflated asset markets to the extent that the rich are getting insanely richer and the poor are landed with even more debt. But doubling global debt in 10 years to $250 trillion has not just doubled the risk of collapse. Instead, risk has grown exponentially as the quality of the debt has deteriorated catastrophically.

A World With No Reserves
Global government debt is at record highs — at unsustainable levels — and so is corporate and personal debt. The problem is that the are no reserves. To draw an analogy with people and longevity, very fat and very thin people on average live shorter lives than the ones with moderate overweight. Because the extra fat reserves protects you in periods of weakness or disease. The same with the world economy, when the next crisis comes it will become evident that the world has no reserves. The only way the world can deal with the next debt crisis is by printing money and issuing more debt. But you can’t solve a debt problem with more debt.

When the crisis soon hits the world, corporate profits will suffer. Highly indebted companies will not meet their debt covenants, especially as interest rates rise along with inflation and collapsing bond prices. So companies will default on their debt as well as property owners with debt. Commercial property will suffer as tenants can’t afford the rents. It will be the same with retail property, which will collapse as spending comes down. The West, and especially the US, is over-stocked with retail space, with most of it at very high rents. As people lose their jobs and interest rates rise, the housing market will collapse by 75% to 90%.

Of all the manipulated markets, gold might be the worst of them all. Investment gold represents less than 0.5% of world financial assets. One might ask, ‘why then are daily traded gross gold volumes over 2x the S&P 500 volumes?’ According to the World Gold Council, gross traded daily gold volume is $280 billion, while daily S&P volume, by comparison, is only $125 billion.

WTF Is Going On?
Annual gold mine production is $120 billion or $329 million per day. So why is daily gold trading at $280 billion, 850x daily mine production of gold? Who shuffles paper gold back and forth to the extent of over 1/4 of $1 trillion on a daily basis. It can’t be the investment market, which is very small. It could be speculators, but not at that magnitude. Most likely it is the bullion banks trading massive amount of paper gold in order to cover up for the major shortage of physical gold, especially central bank gold. We know that bullion banks and futures exchanges only have a fraction of physical gold to cover the outstanding paper gold commitments.

The official central bank gold reserves are around 32,000 tonnes. This figure probably understates the holdings of many Eastern countries like China. The gold buying of the Silk Road countries of China, India, Turkey, and Russia, is relentless. Since 2005, they have accumulated a staggering 33,000 tonnes of physical gold. The buying accelerated in 2008. Since then they have purchased 29,000 tonnes. This means that in the last 11 years, each year these Silk Road countries have bought virtually the entire worldwide annual gold production. 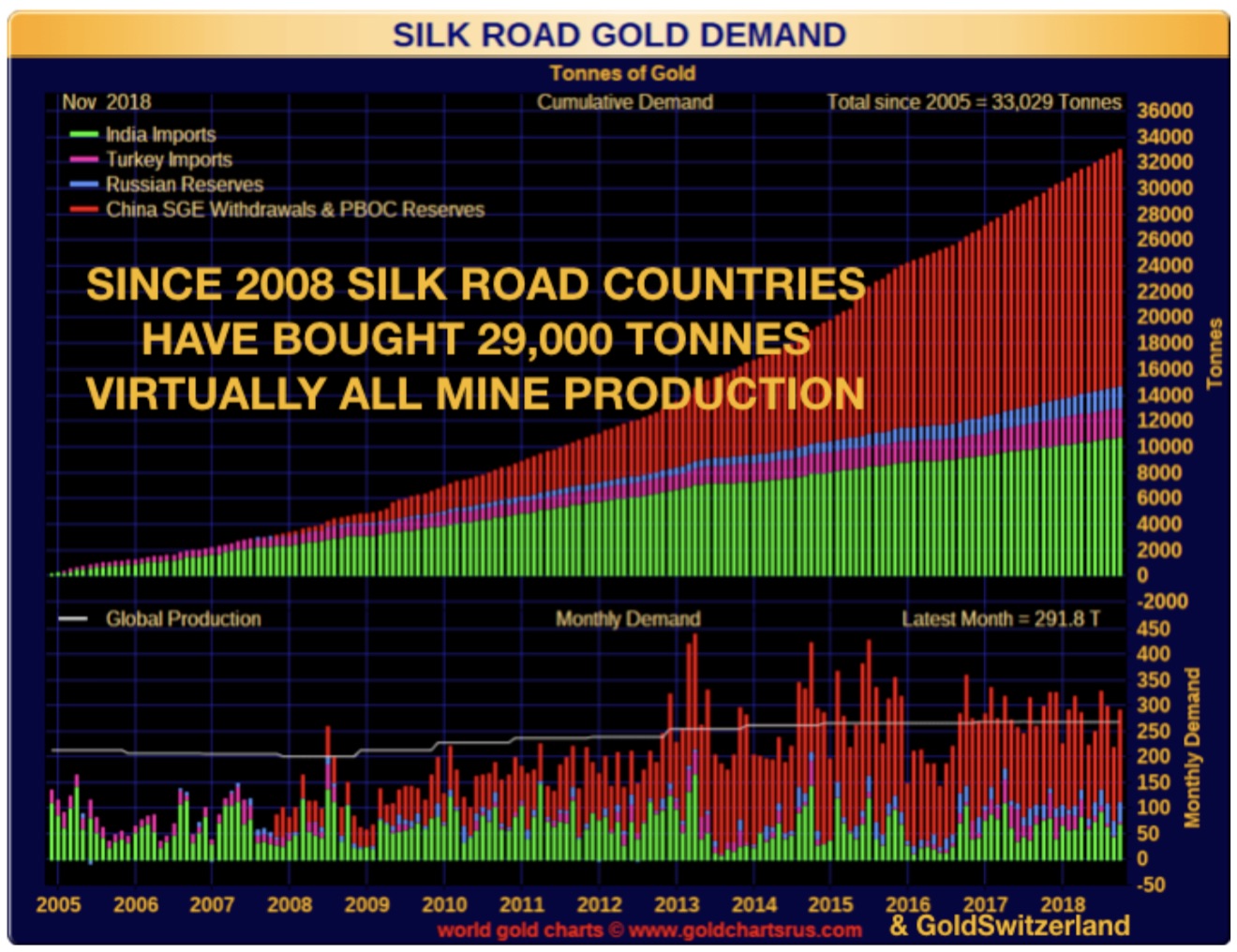 Gold reserves are supposed to be just what they are called, reserves to back the currency and the stability of the country. In spite of this, many countries like the US, UK, and Switzerland, have reduced their reserves significantly. Switzerland and the UK sold most of their gold at rock bottom prices at the end of the 1990s. The US had 20,000 tonnes at the end of the 1950s, but then sold 12,000 tonnes between 1958 and 1971. Looking at the chart below, the US stopped selling gold after Nixon closed the gold window in August, 1971. 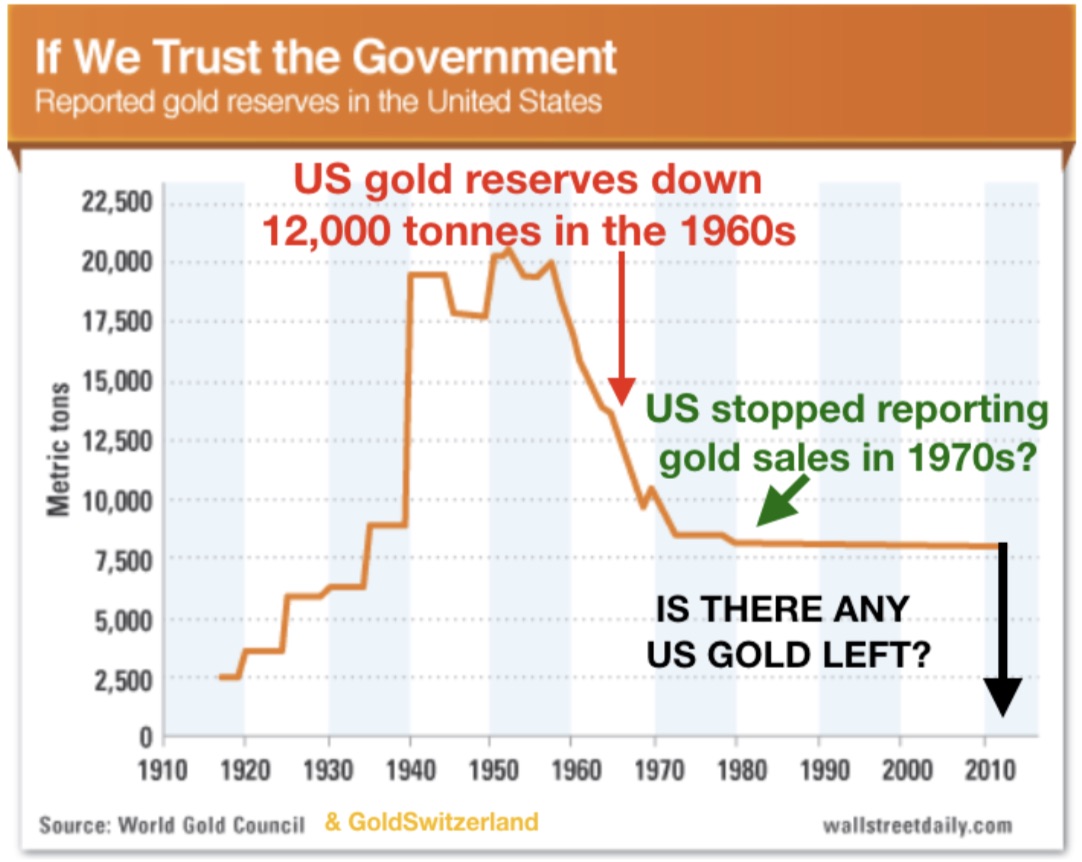 One might ask if they have actually stopped selling or if they have just stopped reporting the sales? Until August 15, 1971, sovereign states could demand payment of debt owed by the US in gold. De Gaulle did this for France and that is the major reason why Nixon ceased the gold backing of the dollar.

De Gaulle Knew The US Was Lying About Its True Gold Holdings
Virtually no central bank in the world publishes a full physical audit of their physical gold or any derivatives positions. The US has not done this since the 1950s. The same is true for most other countries. Since gold is a major asset held by the state, there should obviously be a detailed independent audit. The only reason why no country undertakes or publishes an audit is clearly because they don’t have the gold. A full audit of Western central bank gold would reveal that the majority of the gold is gone. Some banks might have paper gold, but they will never get the physical back since the gold has gone to China and India.

Sources who were close to de Gaulle have informed me that he (de Gaulle) was already certain in the late 1960s that the US had no gold left. Obviously I have no proof but neither do I have any proof that the supposed US gold actually exists. More about this subject in a later article.

Short term, the next up-leg in gold seems to have started. This will be a long move to much higher levels. So buying gold today around $1,300 for wealth preservation purposes will, in a few years, be seen as superb insurance and the bargain of a lifetime…For those who would like to read more of Egon von Greyerz’s fantastic articles CLICK HERE.

“It’s The Beginning Of A New Monetary System.”