Today the man who has become legendary for his predictions on QE and historic moves in currencies and metals said the price of silver will have to hit $950 to equal the 1980 high.

November 15 (King World News) – Egon von Greyerz:  I have never seen a clearer picture for preserving and enhancing wealth than today. More on that at the end of this article.

There are no real markets. Financial markets are a casino with wild players buying and selling paper assets as if they were chips. We just saw clear evidence of that in gold a week ago. The gold price went up $100 from $1,860 to $1,960 in 5 days and then crashed $100 in 5 hours. The alleged triggers were a Covid vaccine and a Biden victory.

A vaccine that needs -70 degrees Celsius and is not properly tested is hardly the saviour of the world at this stage. And a Biden win is not guaranteed but seems more likely if Trump cannot pull a rabbit out of the hat.

GOLD $100 RISE AND $ 100 FALL ALL IN THE PAPER MARKET
The proof of  fake markets can always be found in the underlying real market. When gold rose $100 and then fell $100, the Swiss refiners, who refine 70% of the gold in the world, reported very low physical volumes both on the buying and the selling side.

As usual, these fast moves in the precious metals take place in the paper markets where the casino players can shuffle billions of dollars of paper gold and silver. And they can  execute these paper moves with out ever touching an ounce of the underlying gold or silver bars…

We normally see some movement in ETF volumes when there are major price moves in gold. But as I explained in an article a few months ago, the ETF market is primarily a paper market or at best a market which consists of gold leased from central banks. When there is major buying of the biggest gold ETF GLD, the Swiss refiners seldom see an increase in sales. Instead the bullion banks are lending central bank gold to the ETF.

For that reason, anyone who buys gold for wealth preservation, should never buy a gold ETF but real physical gold.

THE LOSER WILL BE THE WINNER
But as I said in a previous article, it doesn’t matter who wins the election. At the end of the next four year presidential period, it is virtually guaranteed that the winning candidate wishes he would have lost. Because the new president inherits an economically, financially and morally bankrupt country with insoluble debt and deficit problems.

We were told back in 2009 that the problems of the Great Financial Crisis (2006-9) had been solved by central banks. If we were told the truth at that point, there would of course be no need for further stimulus or debt.

We then must ask ourselves why the US debt is up almost 2.5x and the Fed’s balance sheet 3.5x since then. If the system was sound, these figures should have come down and not gone up by multiples.

We know the answer of course. The US economy needs ever growing debts to stand still in real terms.

Shadow Statistics illustrates this excellently. In the 2000s real GDP (adjusted for real inflation) has been negative to the extent of 3-5% annually. So the published GDP figures are fake and only achieved by constantly printing money to grow GDP artificially and keep the US economy from collapsing. 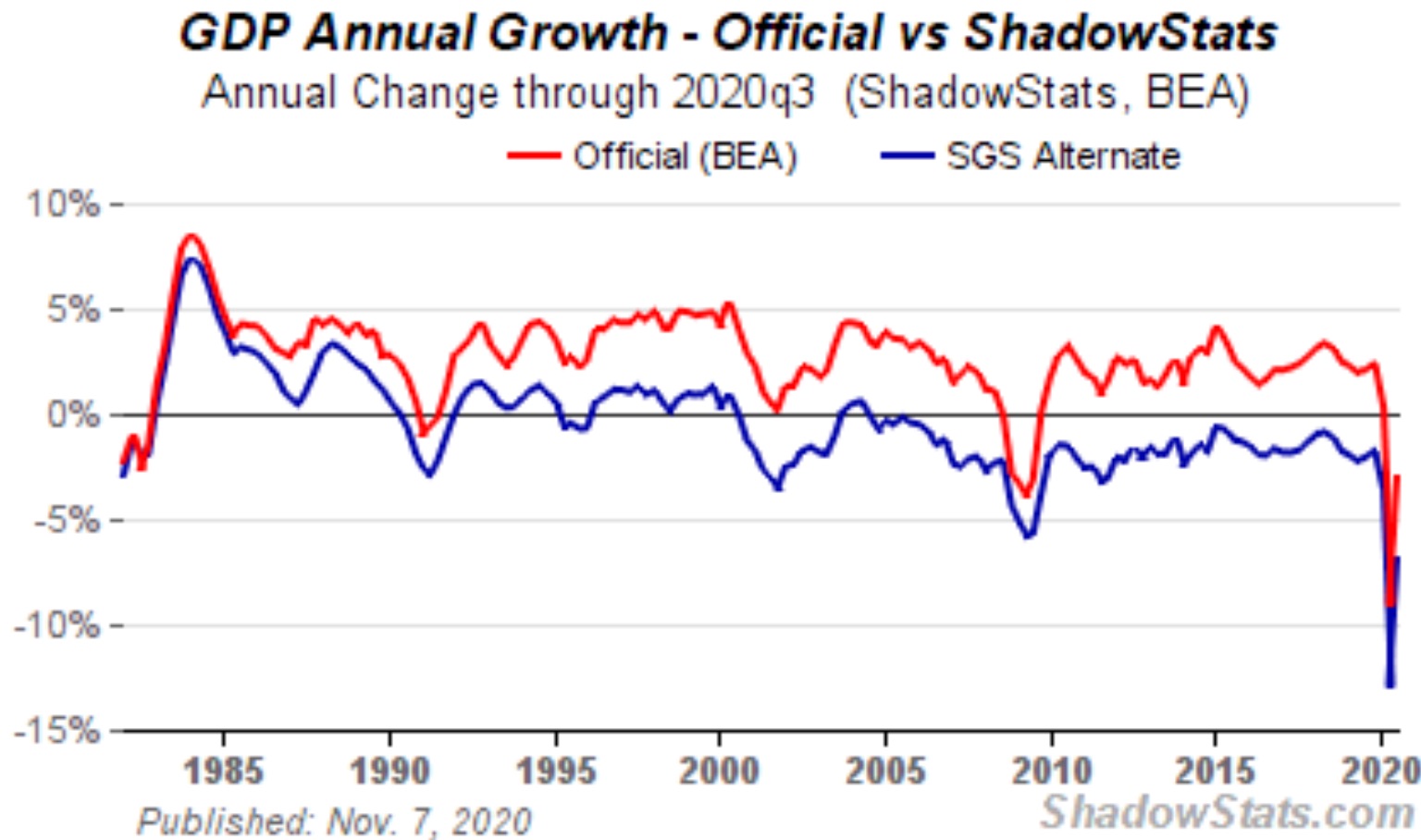 2021 – FED BALANCE SHEET OFF THE CHART
Also, as the Fed Balance Sheet below shows, the US financial system cannot survive without the constant printing of money created out of thin air. As I have stated in many articles the current problems in the world economy were not caused by the Coronavirus but instead by a sick financial system and ever mounting debts which artificially keeps the patient alive.

The latest problems started in August – September 2019 when the ECB and the Fed reaffirmed that they would do what it takes to save the financial system. And thus they flooded the system with money, causing all central banks’ balance sheet to surge. 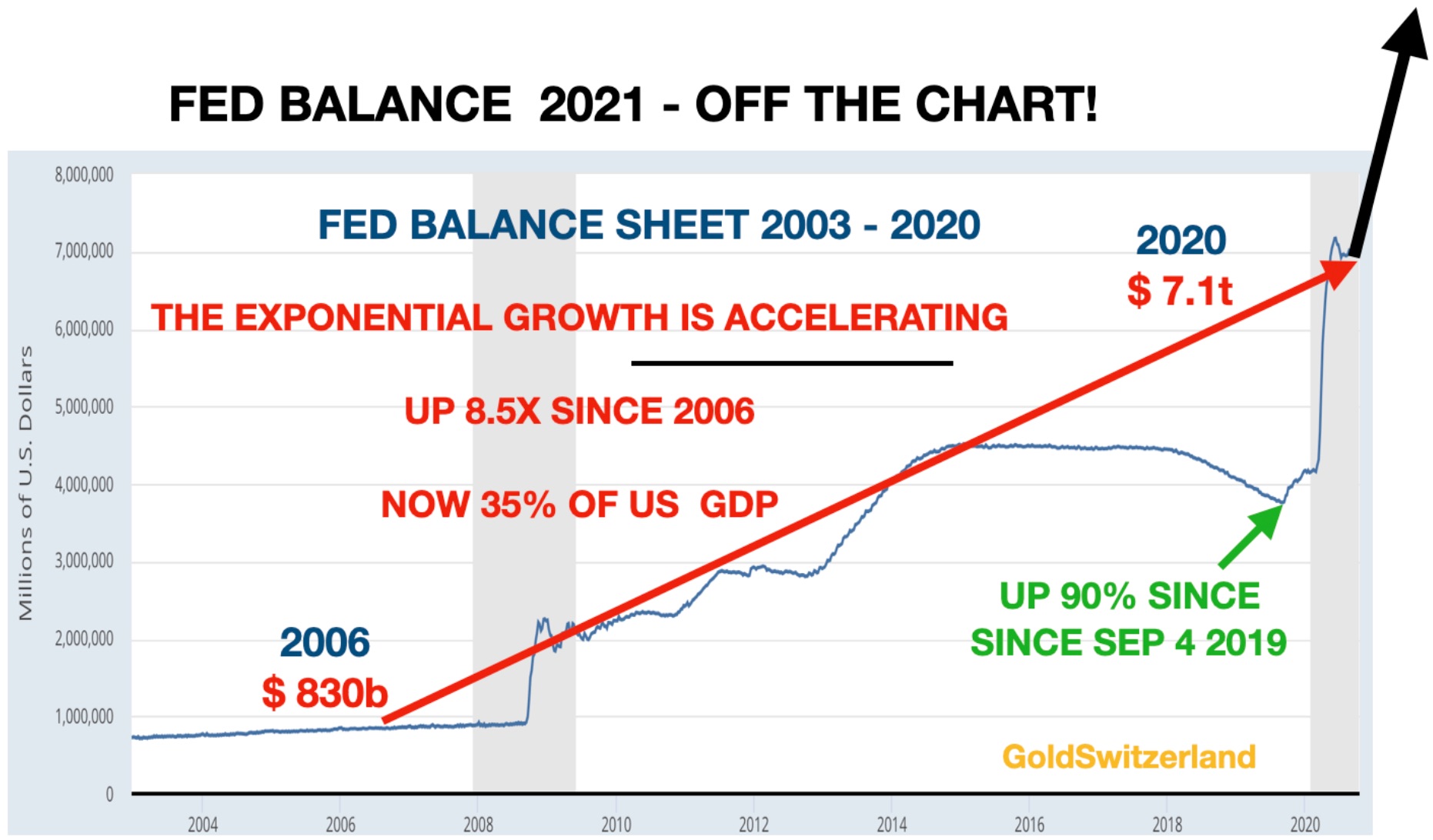 The Fed’s balance sheet has erupted from $3.7 trillion in September 2019 to $7.1T today. With the multiplicity of problems in the US, the new president will be presiding over an economy that will see debt and money printing explode. I forecasted when Trump was elected that US debt would be $40 trillion at the end of 2024 when the next presidential period starts. But the money required to save the financial system and the US economy virtually guarantees  a substantially higher debt than the $40T in 4 years time.

No one should believe that this is a US problem only. We are looking at an entire world which has experienced a debt explosion long before Covid 19 was known. But it is not just a debt explosion but a global financial system which is rotten in its core.

CENTRAL BANKS WILL MONETISE ALL DEBT
This is why debt expansion and money printing will explode in 2021. Central banks will be forced to monetise practically all of the debt issued by governments since there will be no other buyers.

So the trends for 2021 and onwards will be very clear. The obvious victim will be the dollar. The “mighty” Greenback has been crashing for 50 years and is already down 98% since 1971. Only in this century, the dollar has lost 85% in real terms.

Anyone who measures his wealth in US dollars is deluding himself. With the US currency down 85% since 2000, it is clearly a terrible store of wealth. And this is not just in regards to holding dollars. It obviously goes for any asset measured in dollars like stocks, bonds, property etc. For investors who want to fool themselves, why not measure your assets in Venezuelan Bolivars. Measured in a hyperinflationary currency, the increase in wealth looks superb. And remember that the dollar will go together with most paper currencies will go the same way as the Bolivar.

BOND COLLAPSE – ONLY A MATTER OF TIME
Massive money printing will probably initially create a surge in stock markets. But this will be a final hurrah before stocks start a very long secular bear market and a fall of 95% measured in real terms – GOLD.

The biggest surprise for the world will be when central banks lose control of interest rates.  They might manage to hold them for yet some time but they are very likely to move up in 2021 already. Interest rates is the biggest contrarian trade of any market. Virtually nobody, central banks, economists, analysts etc can see higher rates.

What they don’t realise is that as the dollar falls, stock markets crash and money printing accelerates, central banks will lose control of rates as the long end of the bond markets crash. Within the next 1-3 years, as inflation or hyperinflation is a reality, bonds will implode and interest rates will exceed the 15-20% in the 1970s to early 80s. As borrowers default, some rates will reach infinity.

HERE IS THE GOOD NEWS
So let’s talk about the good news. There is a secret which virtually nobody knows about. Well, around 0.5% of investors actually know it. Others have heard about it but don’t understand it.

I am obviously talking about precious metals, primarily in the form of gold and silver. Just in 2020, with stocks surging by over 50% since mid March, gold has outperformed stocks since Covid started in February. (see graph below). Even the Swiss franc has outperformed US stocks. That’s yet more evidence that the US stock market only looks good when measured in a debasing and very weak dollar. 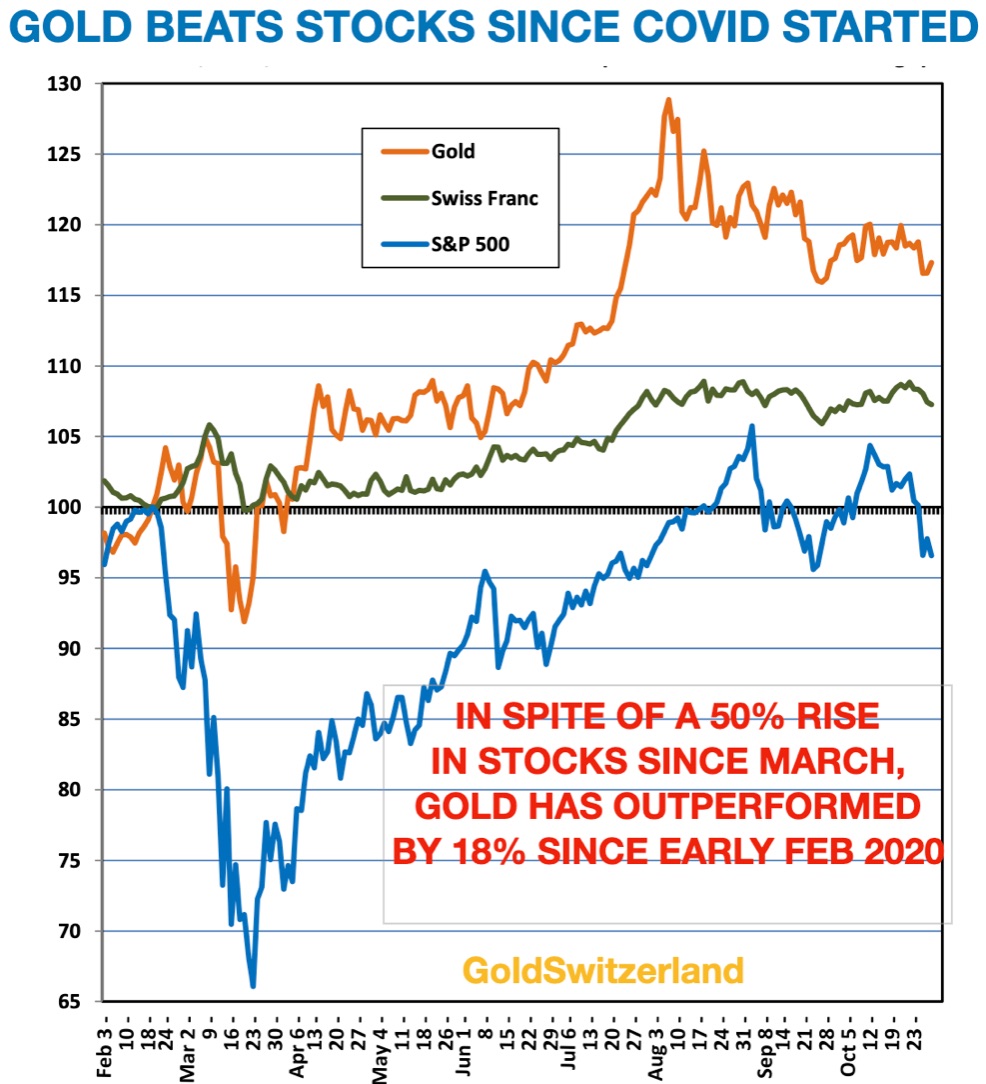 So in the next few years, central banks and governments will guarantee to destroy their currencies in their futile attempts to save the economy by printing worthless, dollars, euros, etc.

SILVER – INVESTMENT OF THE DECADE
For anyone who wants to preserve their wealth, physical gold and silver is such an obvious choice. But sadly, most investors cannot see behind an alluring stock market. Therefore most of them will be left behind as gold goes to $10,000 at least, in today’s money and a lot higher in inflationary money.

Silver will rise even faster and reach at least $600-650 in today’s money. 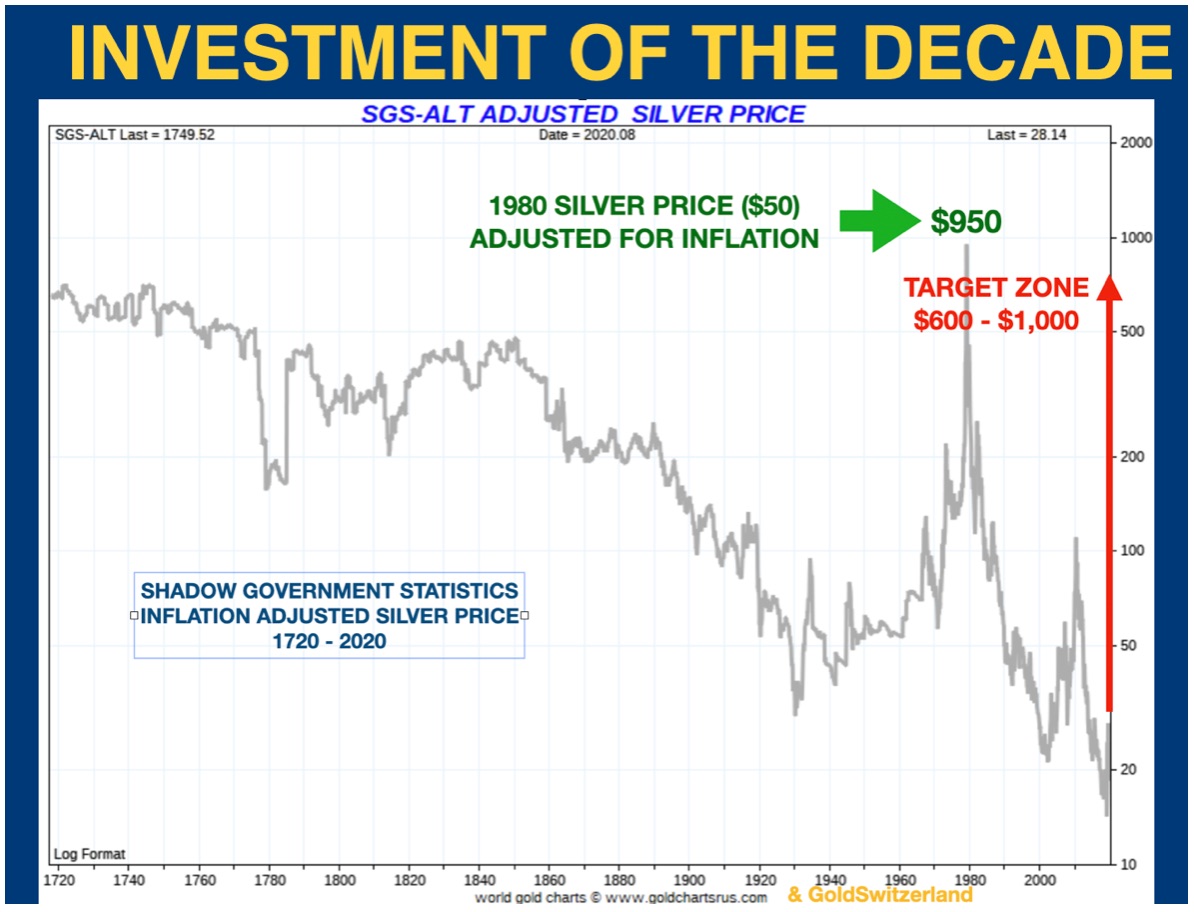 If we take my longstanding gold target of $10,000 in today’s money and divide it by the long term historical gold/silver ratio of 15, this would give a silver price of $667.

GOLD & SILVER STOCKS VS THE DOW
Precious metals mining stocks have even bigger potential. As the graph below shows, gold and silver stocks have declined by 95% against the Dow since 1983. In the next few years these mining stocks will easily outperform the Dow by a multiple of 20x! 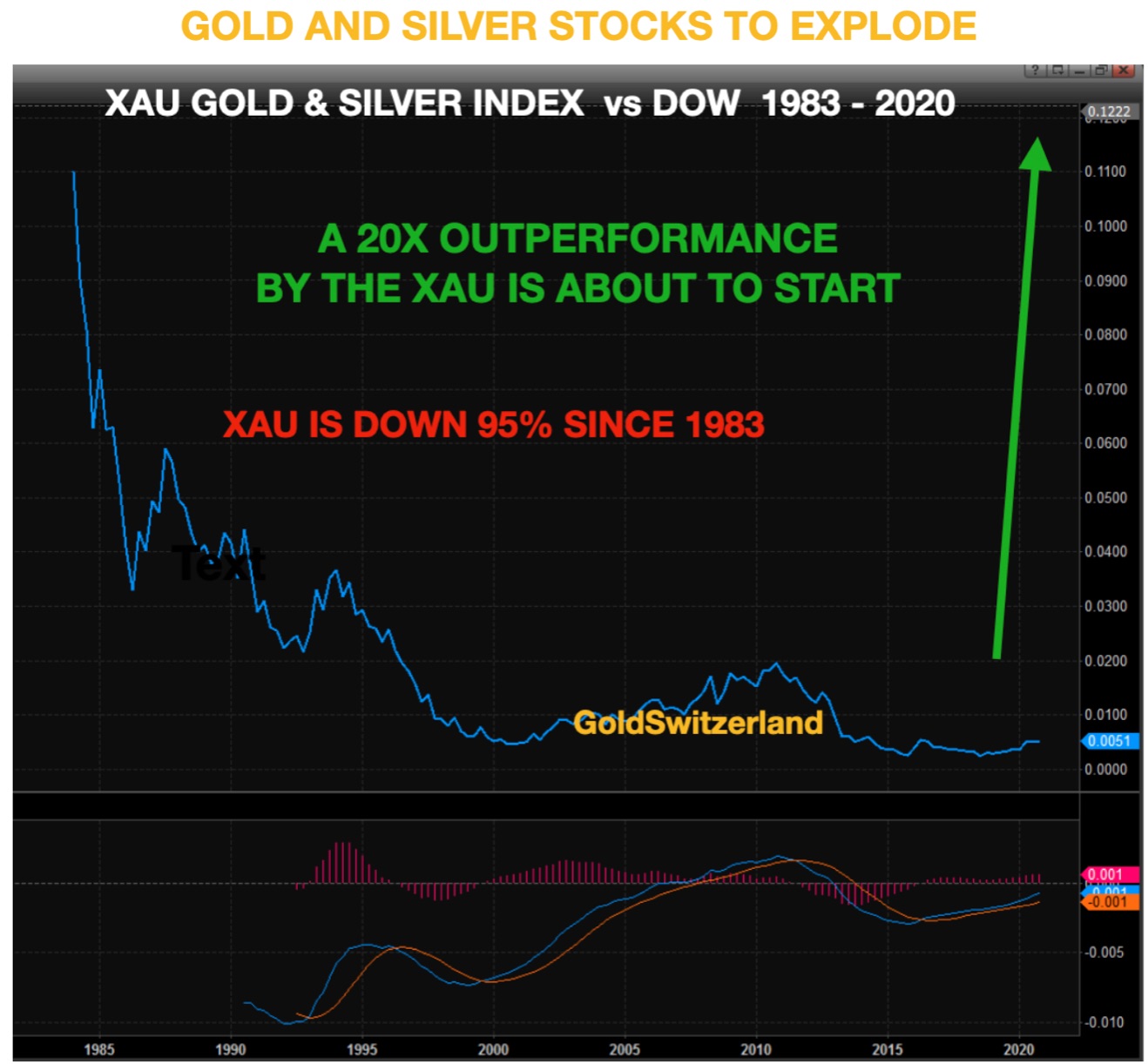 So what would you rather own, ordinary stocks, property or bonds that will decline 95% in real terms or physical gold, silver and mining stocks which will outperform stocks 20x?

I am by no means a gold bug. Just someone who analyses risk. This analysis is crystal clear and shows that the best way to protect wealth in the next 5+ years is to hold physical gold, silver and precious metals mining stocks, just as it has been for the last 20 years.

UNIQUE MOMENT IN HISTORY TO PRESERVE AND ENHANCE WEALTH
I recommend that for wealth preservation purposes, hold mainly gold with less silver and mining stocks.

The reason is obvious. Physical gold is the king of the metals. Silver has massive potential but is very volatile and makes many investors nervous when it corrects viciously. Mining stocks have the greatest potential but are for most investors held within the financial system. You are therefore exposed to massive counterparty risk.

In my 50+ years as an investor, I have never seen such an obvious and attractive way to both preserve  and enhance wealth as in the precious metals sector…For those who would like to read more of Egon von Greyerz’s fantastic articles CLICK HERE.