As the world edges closer to the next crisis, today the man who has become legendary for his predictions on QE and historic moves in currencies just issued an important short term warning and said that the price of silver is set to skyrocket.

Silver Will Skyrocket In Coming Years
September 3 (King World News) – Egon von Greyerz:  “There is one spectacular investment opportunity today that virtually no one talks about. It represents less than 0.1% of global financial assets. This investment has a potential upside of 36x or 3,500%. The downside is extremely limited since supply is finite and demand strong. It is selling at around production cost and has a real intrinsic value. It has also been money for thousands of years.

Yes, I am of course talking about silver. It is probably one of the most undervalued investments that you can buy today. Since the top in 2011 at $50, silver went as low as $14 in 2015. But we must remember that silver was $4 in 2002. Many investors have been burnt by silver, buying high and selling low. I have heard of investors who bought at $50 as they expected a breakout above the 1980 high, which was $50. A fall of up to 70% since then obviously hurts, but fortunately all silver investors will be amply rewarded in coming years, whatever their buying price was…

Silver’s $4 Surge Is Nothing Compared To What Is Coming
If you hold silver today, or if you intend to buy, you are now looking at one of those times in history when an investment is likely to make spectacular gains for an extended period of several years. At some point, probably this year, silver will move up several dollars and later tens of dollars. Over  the next 5 years silver could exceed $500.

But let me warn you, silver is not for widows and orphans. The move up will also see periods of vicious corrections that will keep you awake at night if you are a nervous investor. Thus, there will be massive volatility, so the gains will also involve regular pains. That is why it is definitively better to buy now before the real move starts. We have already seen a $4 move from the lows at the end of June, but that is nothing compared to what is coming.

Silver’s $4 Surge Since June Is Just The Beginning 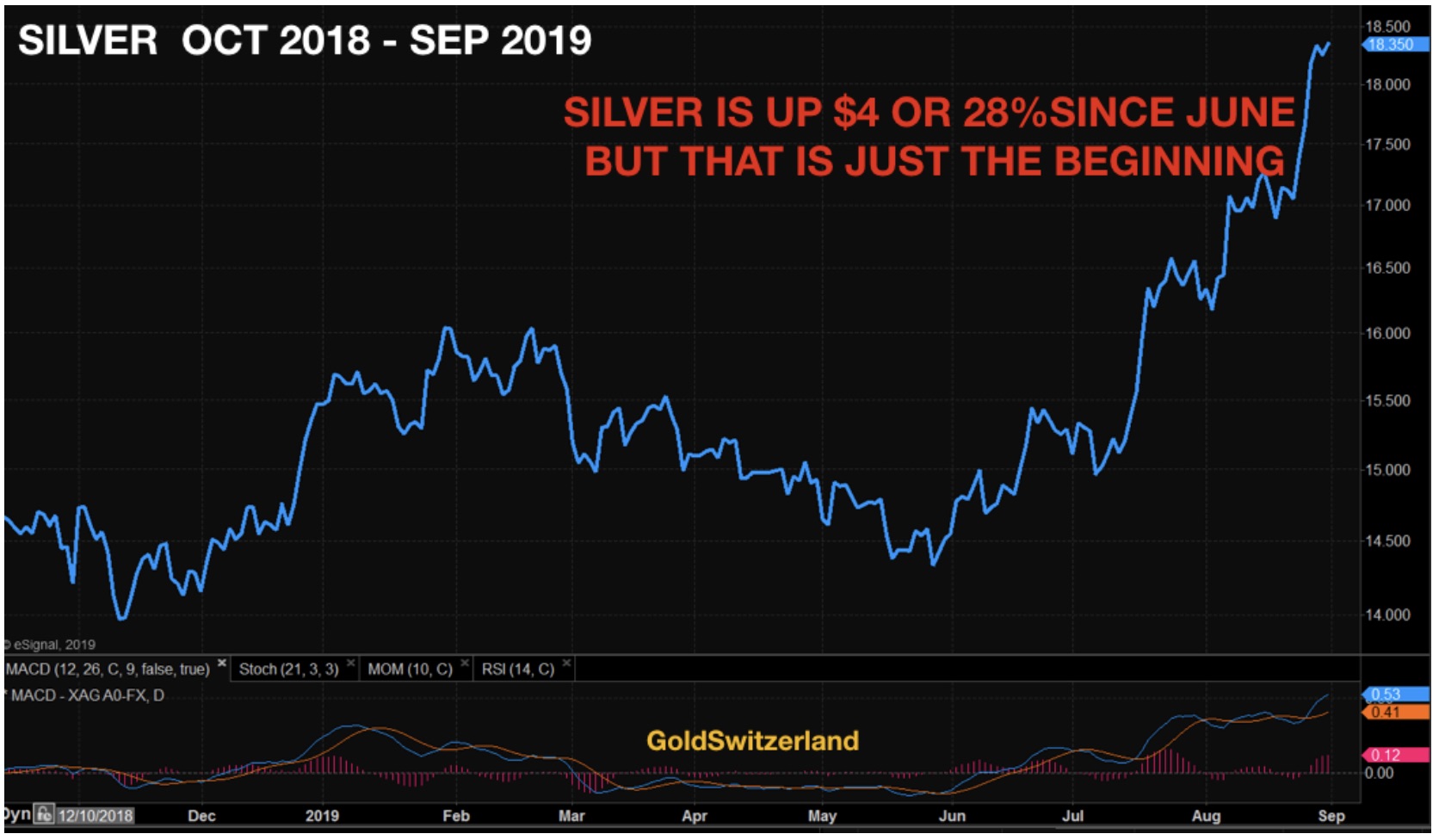 Don’t wait for normal pullbacks because they might not come or they may come from much higher levels. So although we will see massive volatility in silver, most of the surprises will be on the upside. There will be periods when all technical indicators are screaming overbought but the price continues to run. But don’t forget that there will also be vicious corrections.

So why I am so certain that silver will move up now? I have often stated that the real upturn in the precious metals would always be led by silver. Once gold broke the 6 year Maginot resistance line at $1,350 in late June, this was the signal for the metals getting out of the starting blocks. That break was the signal and the gold/silver ratio peaked a few days later at 94 (see chart below). 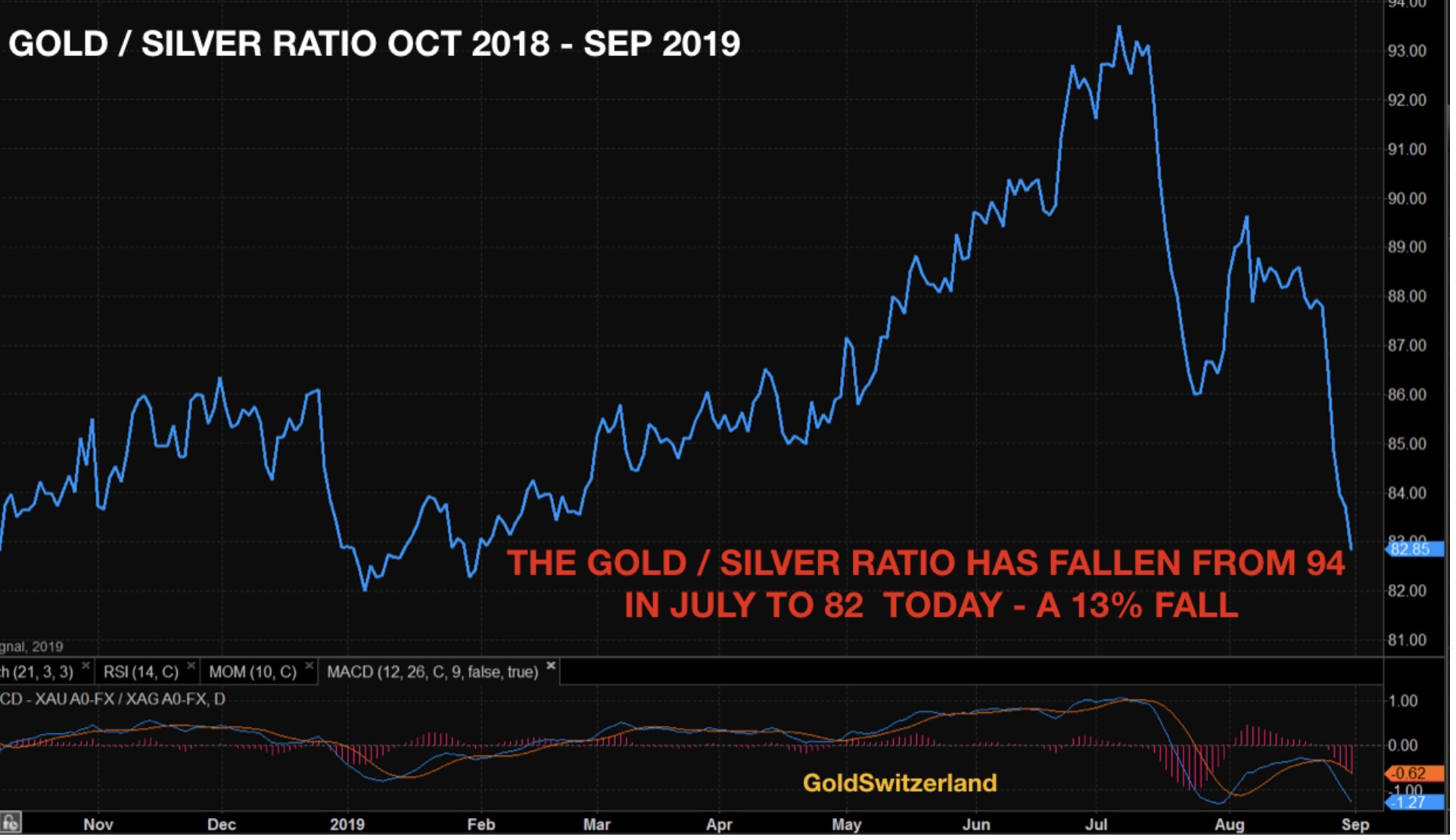 As silver is now going up faster than gold, the ratio is coming down fast and has, so far, tumbled 13%. But that is just the beginning. I expect that ratio to first come down to the 2011 low at 30. This means silver will go up 3x faster than gold (ratio moving from 94 to 30). If we take an example that gold will reach an intermediate top at say $2,000, and the gold/silver ratio then reaches 30, that would mean a silver price of $66.

TARGET: The Gold/Silver Ratio Will Collapse To 15/1 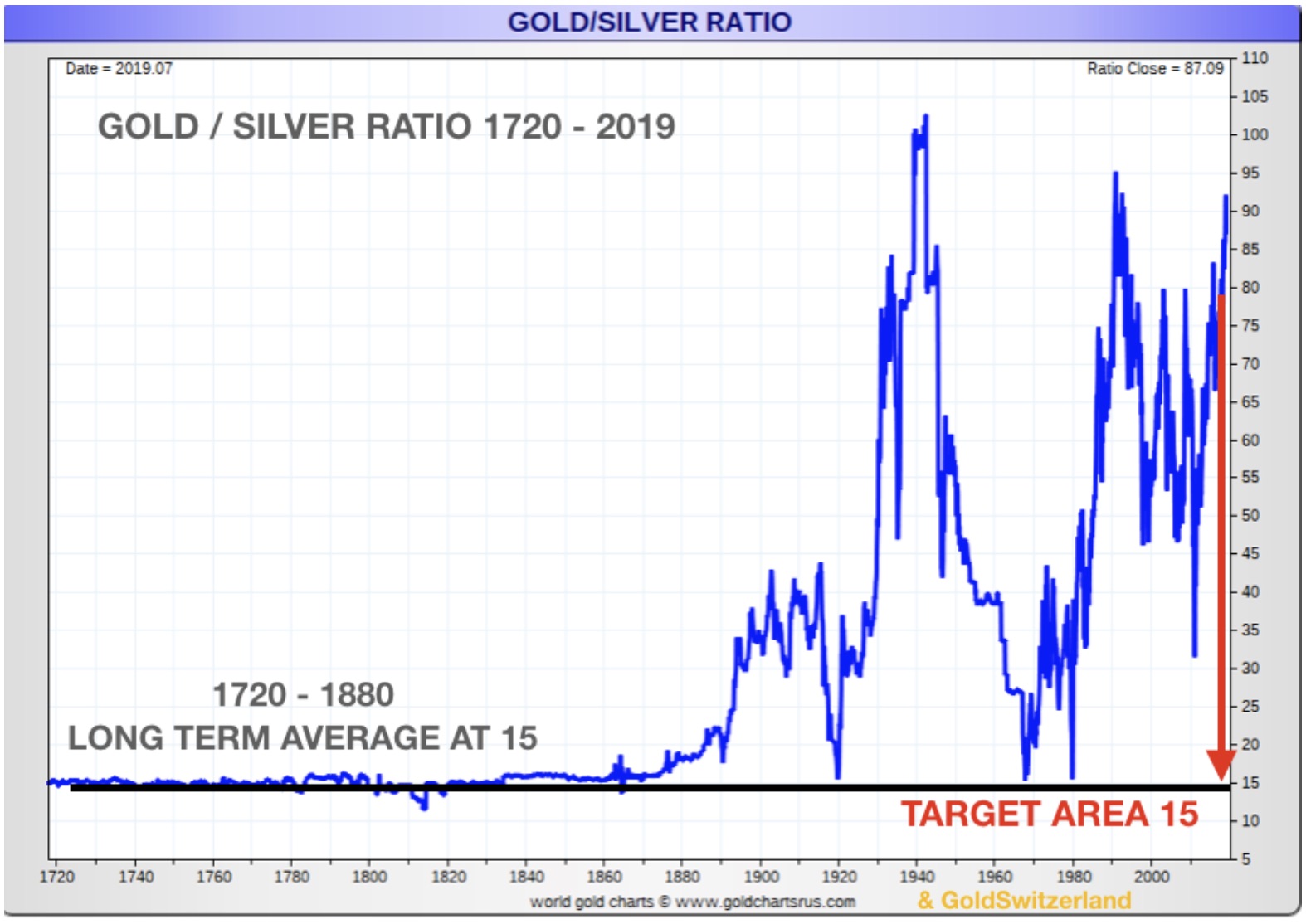 $667 Silver
If we take our long term forecast for gold, which is at least $10,000 in today’s money, and apply the gold/silver historical ratio of 15, we get a silver price of $667 which is quite possible. GoldChartsRUS has produced a silver chart adjusted for real inflation (Shadow Statistics inflation index), which produces an adjusted silver price of $840 in 1980 instead of the actual peak price of $50. Thus, a price of $667 is certainly possible in the next 5 years. 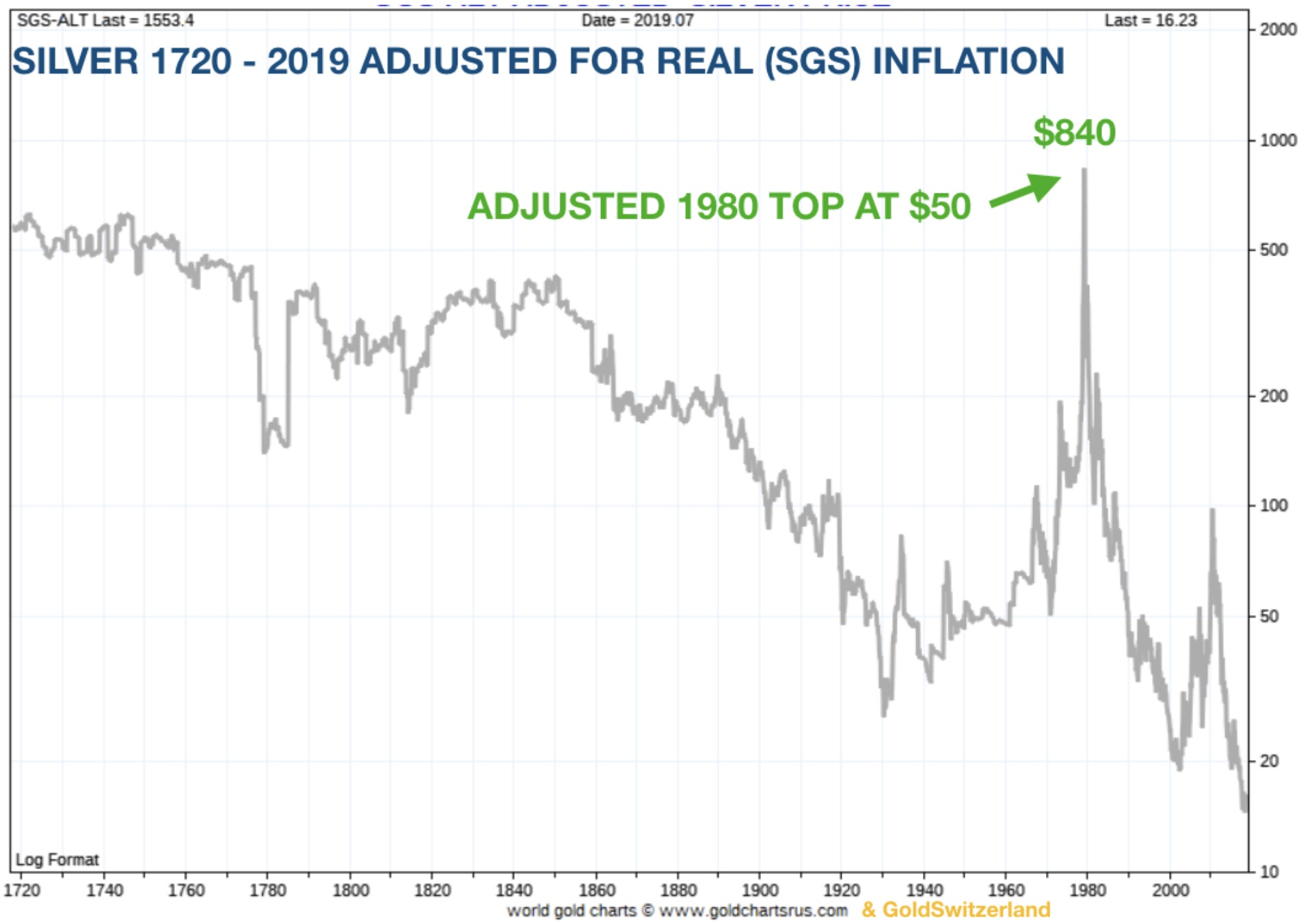 Silver demand is now increasing dramatically and the ETFs have seen an increase of 125 million ounces in the last month. That equals 500 million per year which is 50% of annual production. Investment silver is normally around 30% of demand with the rest being industrial use and silverware. Thus, there is not enough silver for this elevated demand and we must question if the ETFs are actually getting the deliveries of physical silver or just paper promises. I would not count on the promise that they are getting physical silver.

Where Is All Of The Gold Coming From?
There is a similar situation in gold. Since June, gold ETFs, Published Repositories and Mutual Funds, increased their gold holdings by 250 tonnes, which is a record since 2016. The question is, where is the gold coming from to meet this increased demand?

Swiss refiners are still reporting very slow business and high stock levels. They are seeing material coming back from the Far East, including China and Thailand. The same is true with many bullion banks which are reporting unusually high stocks. We would clearly have expected the Swiss refiners, who produce 70% of all the gold bars in the world, to reflect the increase in demand from ETFs and other sources. I can only assume that the ETFs are not actually getting physical deliveries but are just buying paper gold with an undertaking by the bullion bank to deliver physical.

This confirms my strong opinion that no one should ever buy gold or silver ETFs. All you get is a piece of paper that you own x ounces of gold. Most ETF prospectuses state that they don’t have to hold the physical. And judging by the slow business and high stock levels of refiners and bullion banks, the ETFs seem to top up their paper stock rather than the physical.

Even if the ETFs do hold physical metals, it is still within the banking system with all of the risks that involves. Investors in ETFs don’t have their own bars, so they have no access to their gold. The gold is not insured and it is subject to all the risks of the financial system, especially if the ETF only has a paper claim on the bank it bought the gold or silver from.

Gold Has Had A Spectacular Year
Gold has had a spectacular year so far and outperformed virtually all major investment classes. In 2019, gold is up 20% in US dollars, 24% in Euros, 25% in UK Pounds and 15% in Yen. In August we have seen strong moves in gold. Gold took off when the Maginot Line was broken at $1,350 back in June.

Gold Has Surged Strongly Since Breaking The Gold Maginot Line At $1,350 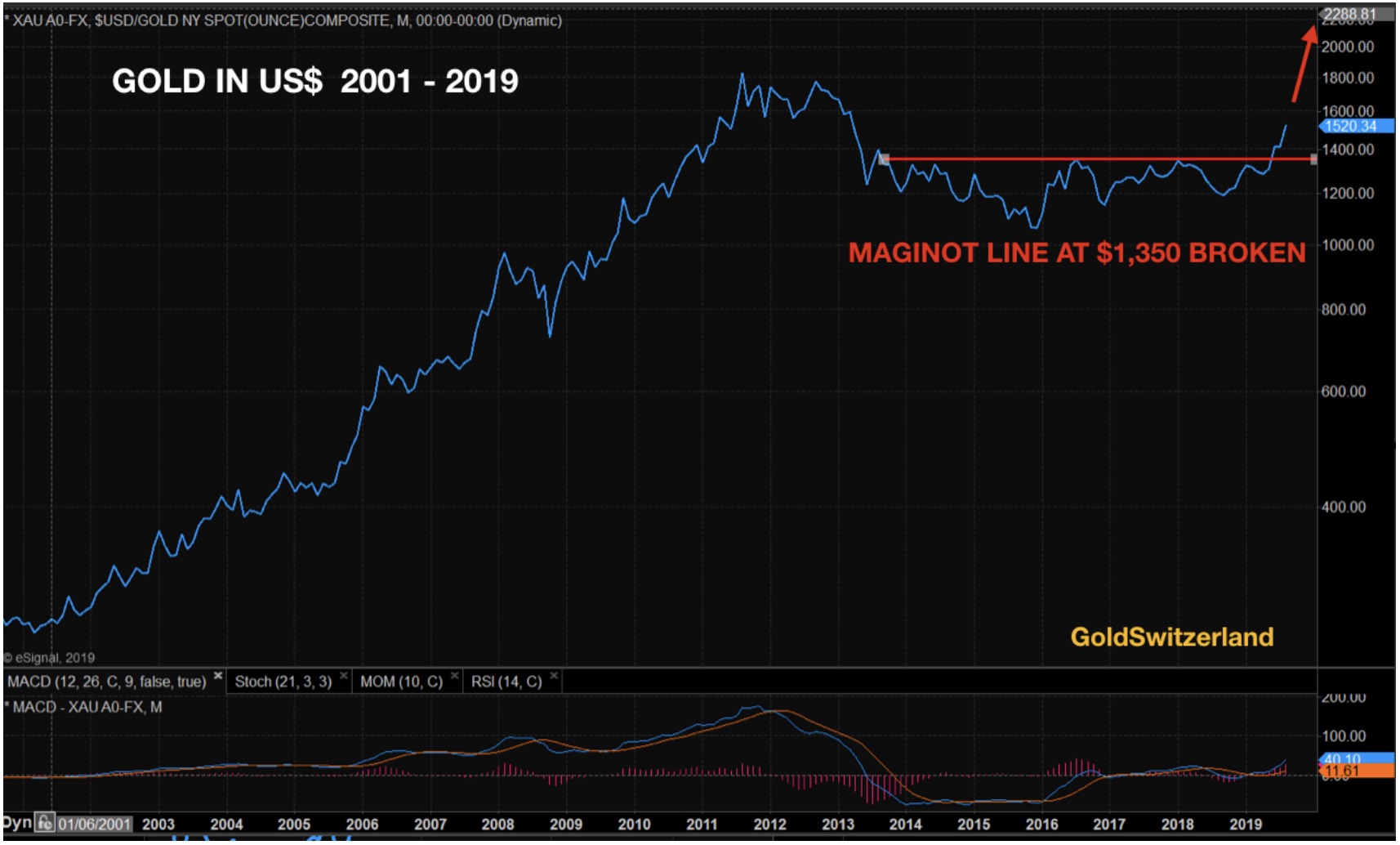 When The Paper Market Breaks
The lack of physical demand confirms what we have always known, namely that the gold price is determined by the paper market. So in spite of the best year for gold since 2009, it is not yet reflected in the physical market. In one way this situation makes the coming price move in gold and silver even more bullish. Futures exchanges and bullion banks are clearly accumulating even bigger short paper positions in gold and silver. When the paper market breaks there will be absolute panic in the physical market with gold going up by $1000s and silver by $10s. That will definitively happen in the next few years but it could happen at any time.

I have given some potential price projections in this article. They are by no means meant to be sensational since I believe they are very realistic. But remember that you are not buying gold or silver for short term price gains and therefore price targets are unimportant. Physical precious metals are bought for wealth preservation purposes. You buy and own physical gold and silver as insurance against a totally rotten and manipulated financial system which is unlikely to survive in its present form.

If you don’t already own gold and silver, buy now. Don’t be greedy and wait for pullbacks. If you wait for pullbacks you might miss the boat totally, which doesn’t just mean losing a potential investment gain. Instead, it means that you will be totally unprotected and unprepared for what is going to hit the world in coming years.

Even if you have to pay up when buying in the near term, that is totally irrelevant. In a few years gold and silver will be multiples of what they are now being quoted. And if you store it in the safest vaults and  jurisdictions you will be able to sleep well at night.

IMPORTANT SHORT TERM WARNING
It looks like this week we could see the perfect storm starting in global markets. It will be of a much greater magnitude than Hurricane Dorian, which is now reaching the US.

The technical picture of markets tell us that major moves could start this week. The trigger could be a geopolitical event like the Hong Kong riots or some financial event. What we could see this week are stock markets beginning a major fall that will lead to a crash. More importantly, gold and silver as well as platinum are now poised for major moves higher starting this week. All of these moves will last for many years, but this week could be the beginning.

Whether the moves start this week or a bit later, investors should prepare themselves for the biggest wealth destruction ever taking place over the next few years…For those who would like to read more of Egon von Greyerz’s fantastic articles CLICK HERE.

What A Wipeout, Hedge Fund Gold Bets Increase, China Can Play The Game…But They Are Losing, Plus A Reality Check CLICK HERE TO READ