As the world edges closer to the next crisis, today the man who has become legendary for his predictions on QE and historic moves in currencies and metals spoke with King World News about Richard Russell, Jim Sinclair, China, massive inflation and $50,000 gold.

Richard Russell’s “Inflate Or Die”
January 26 (King World News) – Egon von Greyerz:  “Inflate or die” was coined by the legendary and extremely wise Richard Russell of Dow Theory Letters.  He understood the necessity of permanent central bank money printing already at the beginning of this century. Richard died in 2015, so sadly he didn’t live to see how right he was.

After three decades of massive money printing and credit expansion, “inflate or die” has artificially kept the world economy going. But we are now in the 2020s moving in to the next stage which will be INFLATE AND DIE. Because, as stock and credit bubbles implode and money printing accelerates, the world will soon realize that not only is the freshly printed money worthless, but also most of the manufactured money from the last 20 years.

But before we look at the consequences of inflate and die, last week 117 billionaires attended a Weather conference in Davos. They were joined by another 2,900 CEOs, political leaders, climate activists and other self-important people. It is quite surprising that so many “important” people get together to talk about the weather. With Swedish Greta (not Garbo) telling everyone “how dare you, the entire eco-system is collapsing, people are dying” etc., not just every Davos VIP but also all major central banks must now have a green agenda.

For example, Lagarde, the ECB Chief, has made a strategic review of the bank’s purpose and stated that action on climate is a fundamental component of monetary policy. Climate change action will be a “mission critical” priority for the ECB. Would be better if she controlled the EU financial system rather than getting involved in controlling temperatures.

Never before has such a crowd met up to discuss the climate, traveling there by 309 private jets plus hundreds of commercial flights and either helicopter or car from Zurich to Davos. I haven’t seen a Davos CO2 calculation yet but someone will most probably produce that. The organizers have made some politically correct and contrived calculation to justify this extravaganza to say that the WEF conference is carbon neutral. Hmmm!…

Of course the globalists didn’t go there to only talk about the weather. But no one dared to attend Davos, except for Trump, without being totally behind the only Politically Correct position which states that humans are now in control of the earth’s temperature. So climate cycles are no longer valid as humans have raised the temperature recently and must now limit the increase to 1.5º C by 2050. The earth was formed 4.5 billion years ago and since then the climate cycles have taken care of themselves just as they will in the next few billion years.

It is today compulsory to be committed to controlling the climate even though it can never be achieved. But this is today at the top of the global agenda for the West. Using young people to threaten the world with these Hobgoblins is working very effectively.

The American writer Henry Louis Menken understood the purpose of these actions: 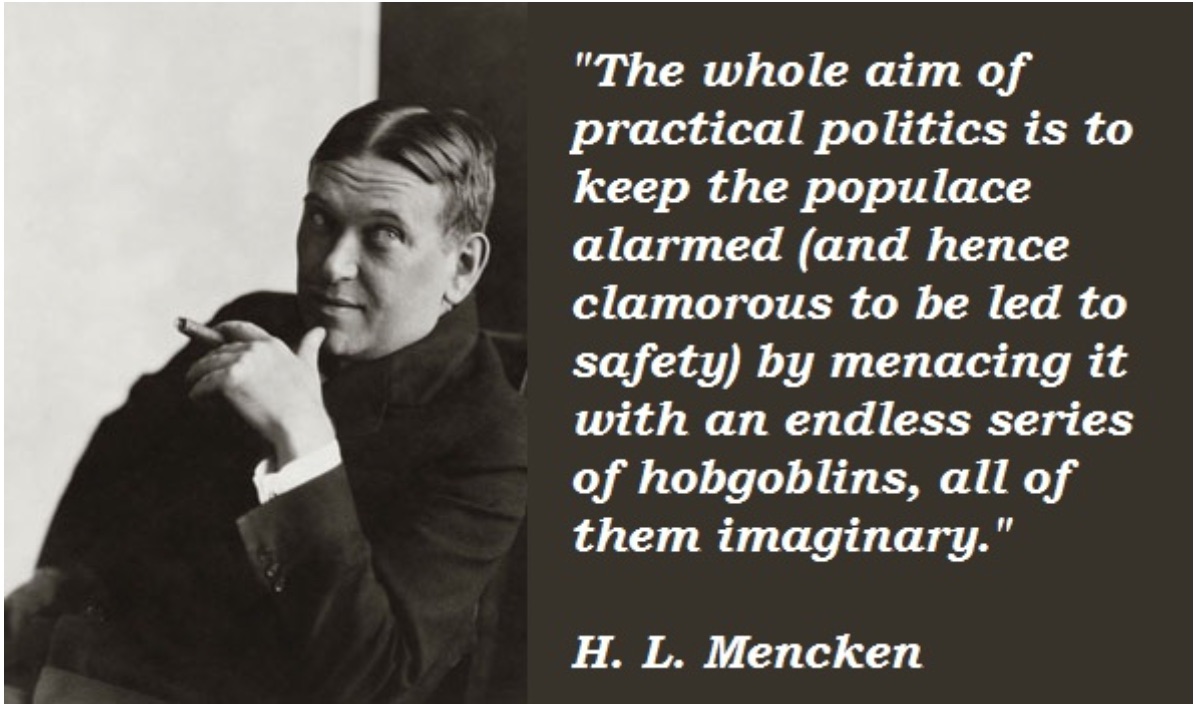 The world will soon forget about the climate hobgoblins as much more dangerous trolls emerge. The Davos conference should have focused on these trolls rather than the climate hobgoblins. The trolls I am talking about is obviously the unprecedented level of economic, financial and political risk that the world is now facing. 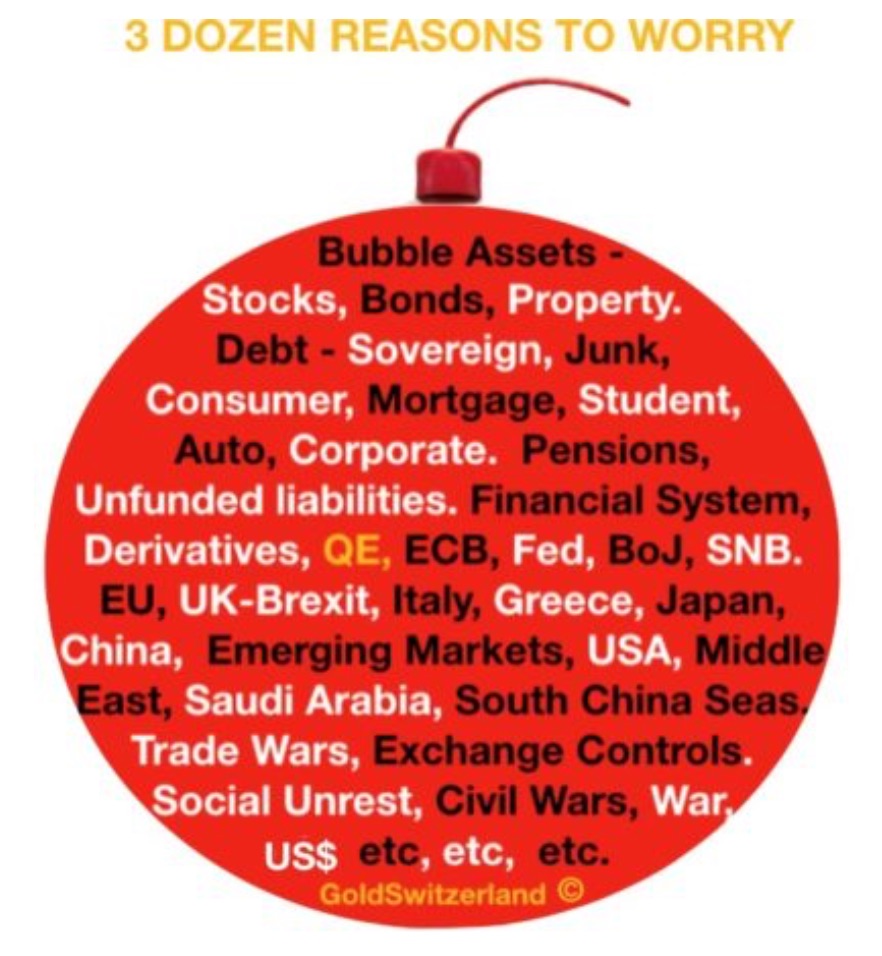 I produced the time-bomb above some time ago with 3 dozen reasons to worry with the main risk being global debt. For every day that passes new risks are emerging like the Coronavirus in Wuhan. Unofficial reports  state that China is not telling the whole story and that there may be as many as 10,000 dead in Wuhan.

Viruses have ravaged the world before and the Black Death or the Pest killed up to 200 million people in the 14th century.  50% of Europe’s population perished and around 35% in the rest of the world.

We have most probably not seen the end of the Iran situation and there is a major risk that this could evolve to a global conflict involving the US and Russia. With the current US administration being extremely capricious, catastrophic events are near at hand.

Very little was discussed in Davos in regard to global risk. Also, around the world, MSM (main stream media) have barely covered the warnings of a global debt crisis from the World Bank:

“Low global interest rates provide only a precarious protection against financial crises,” said Ayhan Kose, a World Bank official. “The history of past waves of debt accumulation shows that these waves tend to have unhappy endings.”

The World Bank is obviously right, there will be an “unhappy ending.” And as has been the case historically, the majority of the world will be totally unprepared.

The graph below shows that investors haven’t got a clue and live in a world of fantasy and euphoria. The statements and actions by central banks since late August 2019 were the clearest sign of severe problems in the system that the world could receive. But the graph below shows that the “Don’t Worry Be Happy” attitude of investors is unperturbed. 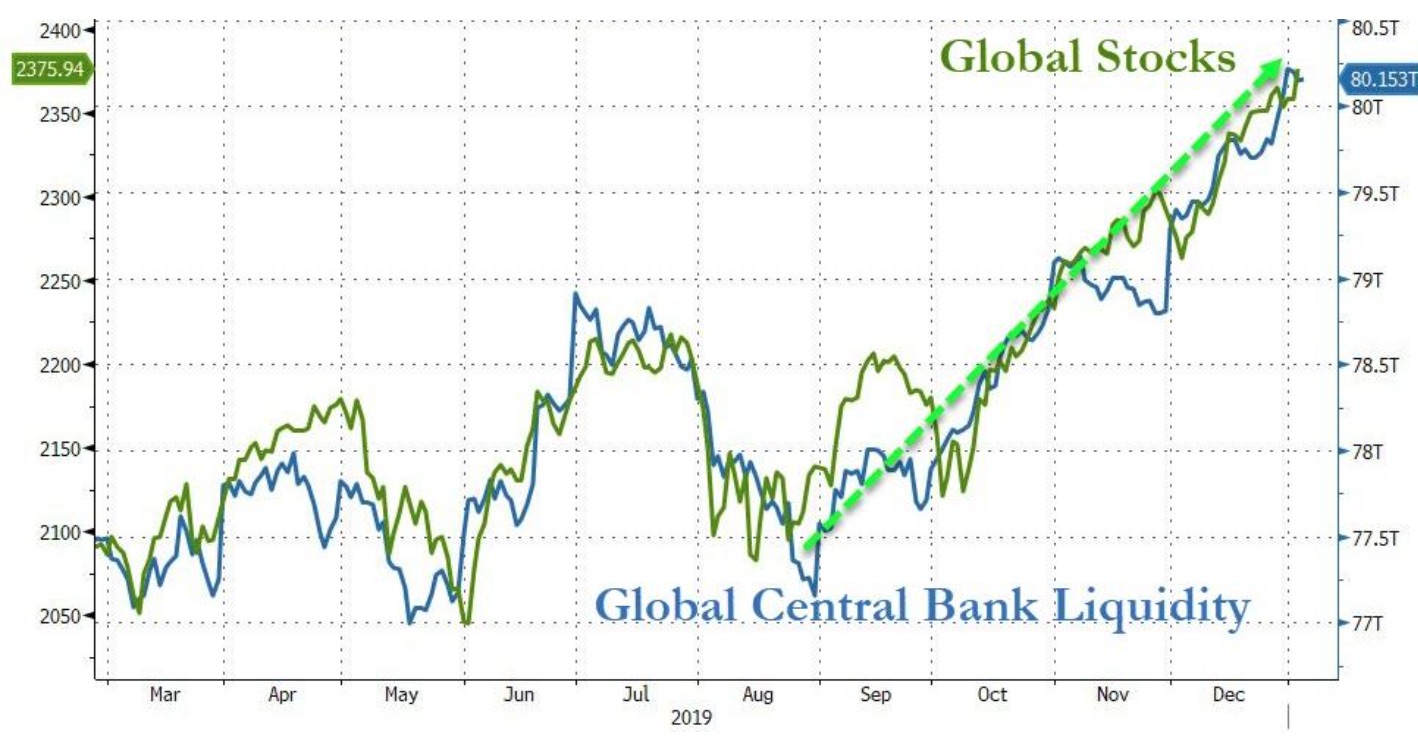 So more money printing due to a serious liquidity and solvency crisis in the financial system is only seen as good news for stock investors. As money printing to save the system accelerates so does the stock market.

But profits have virtually stagnated since 2011 as the graph below shows. The gap between share price growth and profit has become much bigger than in 2000 and 2007 when we saw the big falls in stocks. The coming fall will be substantially bigger. 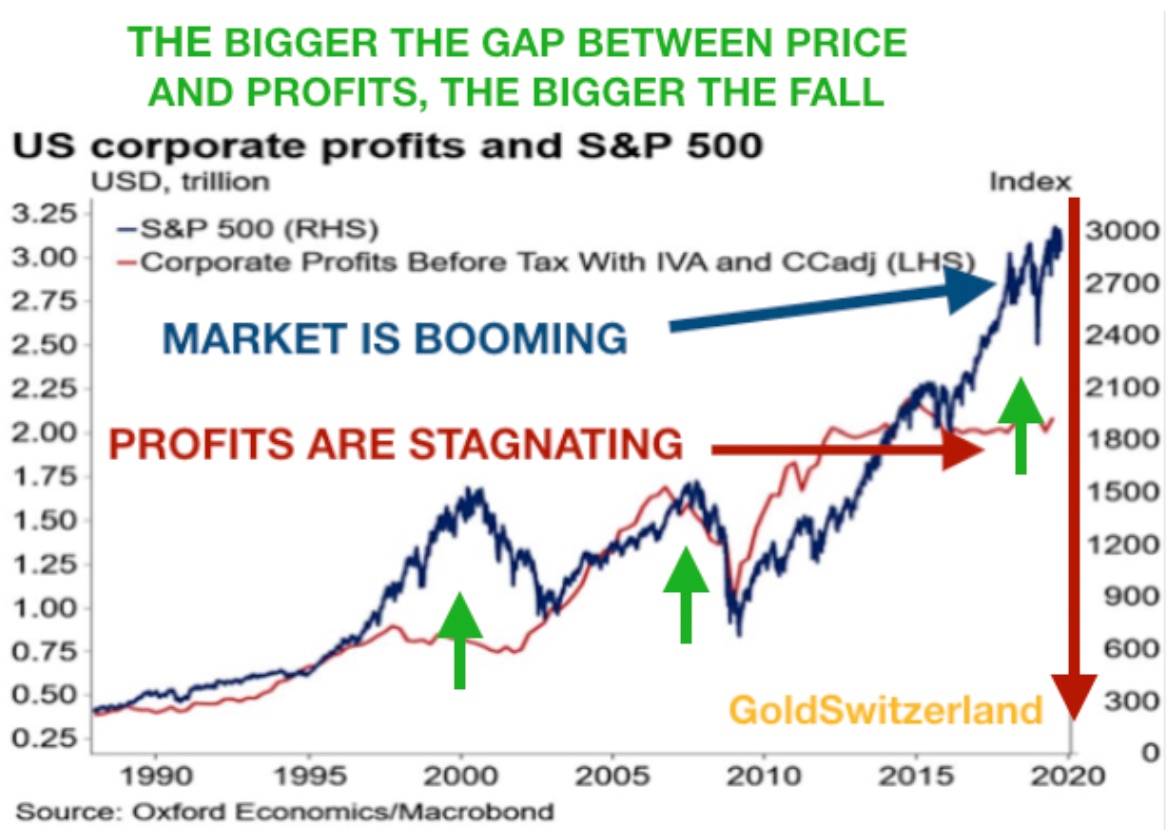 Commodities, including precious metals, are still at historically low prices to stocks. The reversal will start in 2020 and be devastating for the world. Stock investors will in coming years lose up to 95% in real terms. Food prices will surge and so will gold and silver. High food prices and shortages will cause major problems. 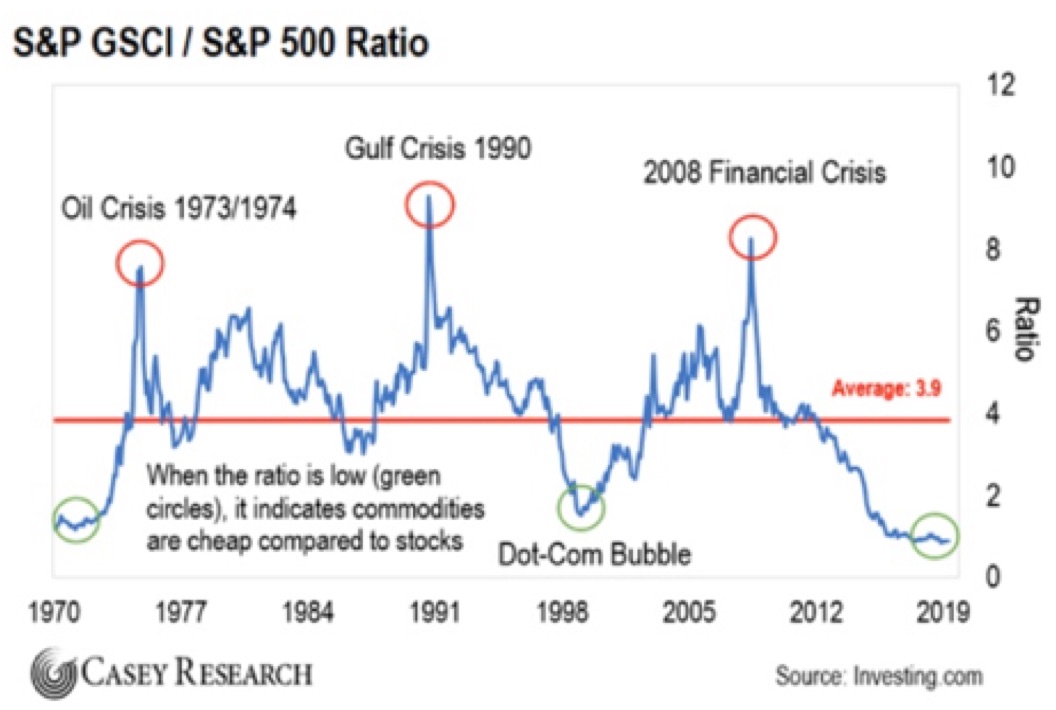 China knows what will happen since they are likely to trigger a financial event that leads to a dollar collapse and gold revaluation. As the chart below shows, China as a whole has bought 19,000 tonnes of gold since 2006. The real level of China’s gold reserves are not public but the estimate is that this could be as high as 20,000 tonnes. At some point China will declare their hand and the US will be forced to prove if they have even half of the 8,000 tonnes that they officially declare. 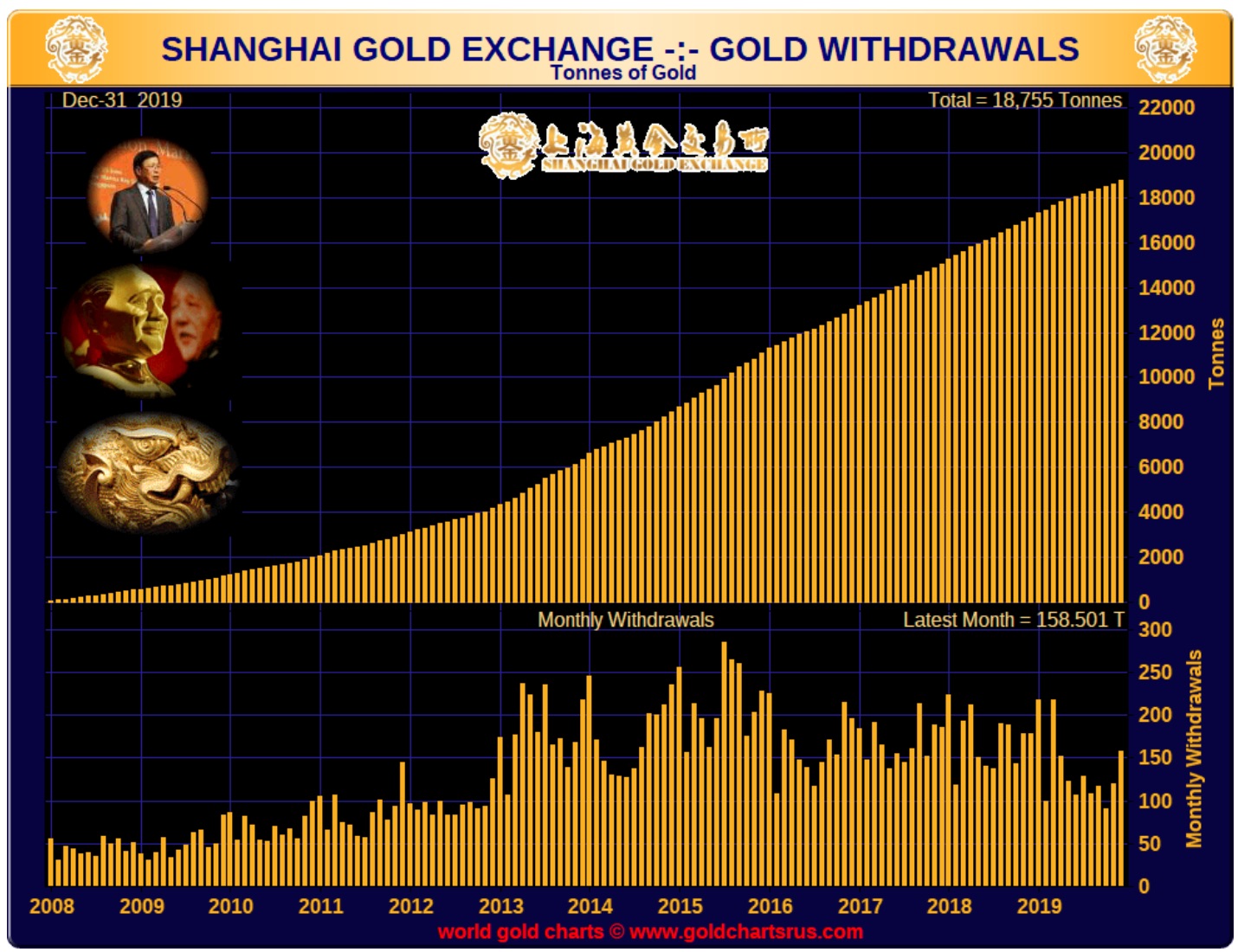 The Russian Central Bank has also been preparing for the fall of the US and the dollar. Their gold holdings are up almost 6x since 2006. 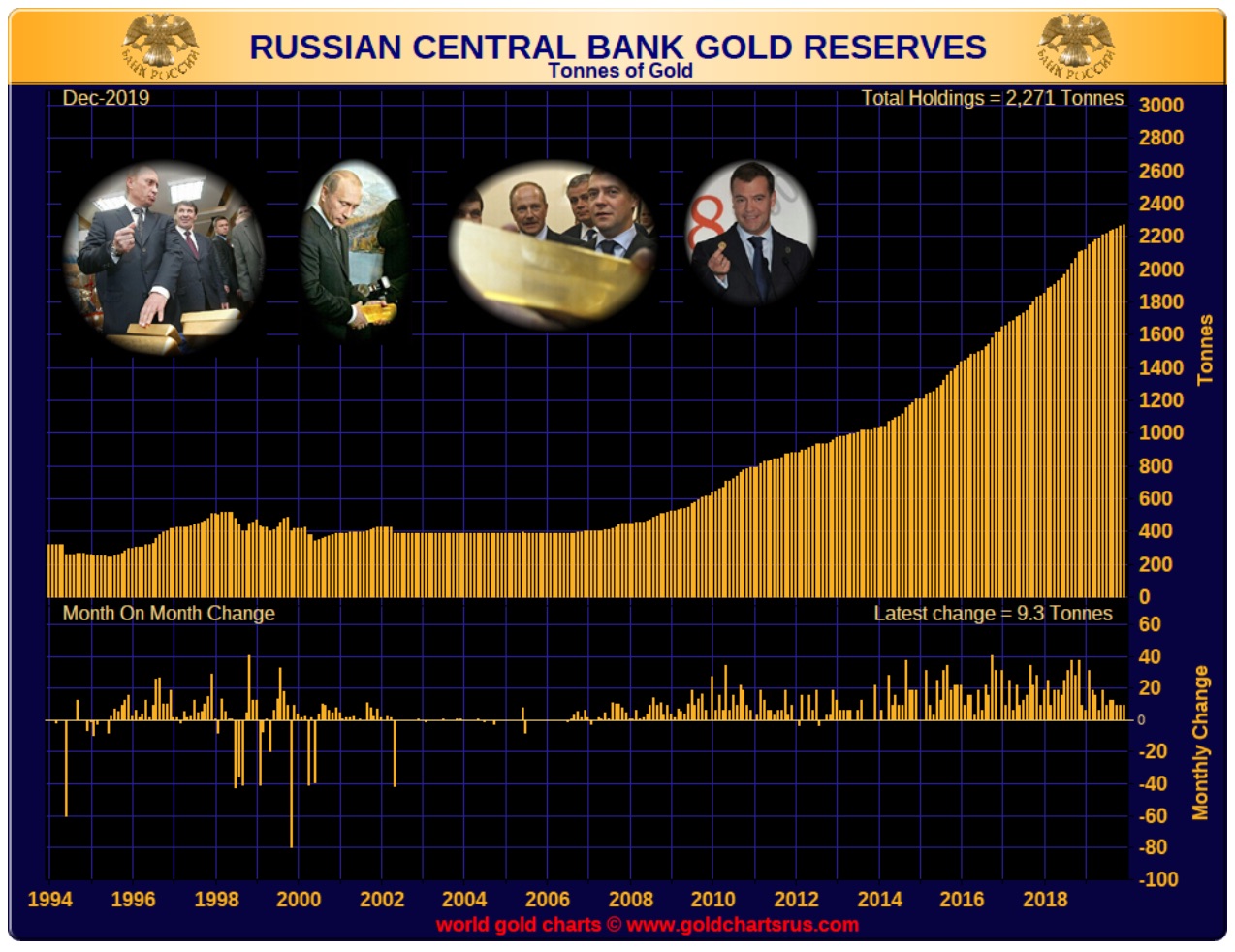 The individual who knows gold better than anyone living today is Mr Gold, Jim Sinclair. He has accurately predicted the gold market for 1/2 century. What Jim calls Emancipated Gold will reach $50,000 by 2025 according to his forecast. I believe this is similar to Freegold, which I wrote about in Dec 2018.  Freegold is physical gold free from official money systems, owned free of all other claims and freely traded. 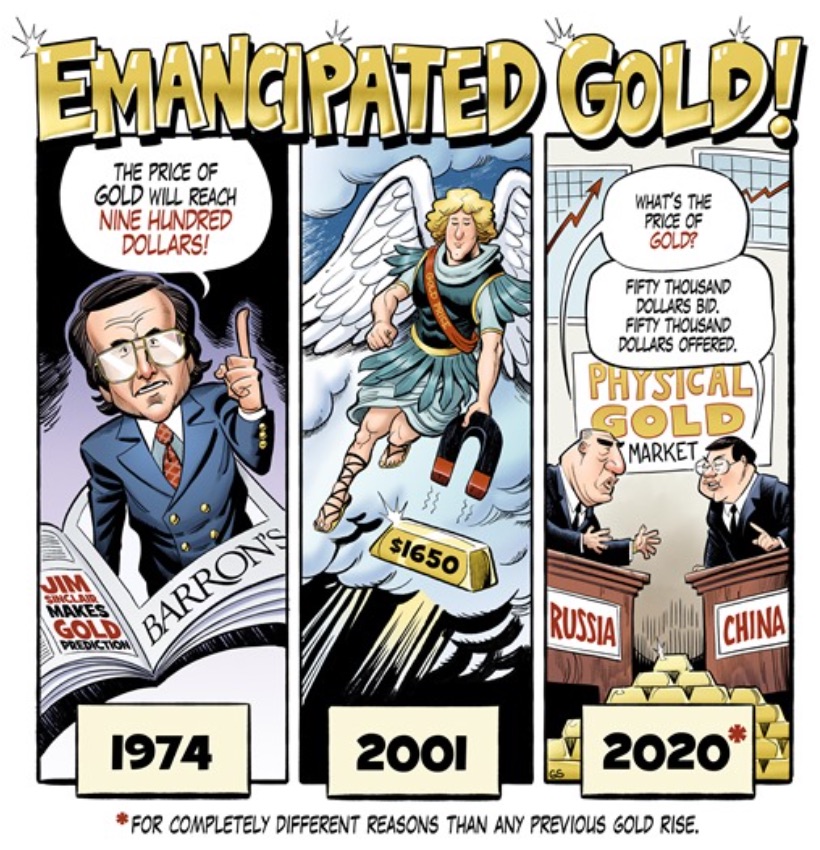 Of course Jim’s forecast can be wrong. But only a foolish man would bet against him.

For two decades I have been writing about gold and discussing the importance of holding physical gold outside the banking system. Gold is up 5 to 7 times since then in the major currencies and a lot more against other currencies.  Still, the world financial system is still standing. But that is likely to change soon. Our technical indicators for stocks and gold indicate that a major turn in markets should be imminent.

In my article two weeks ago I indicated that the Dow/Gold ratio spells trouble ahead. The correction up in the ratio since 2011 most probably finished in 2018. In the chart below I show that the quarterly MACD has just turned down. This is a very important long term trending indicator and spells trouble ahead for the world. 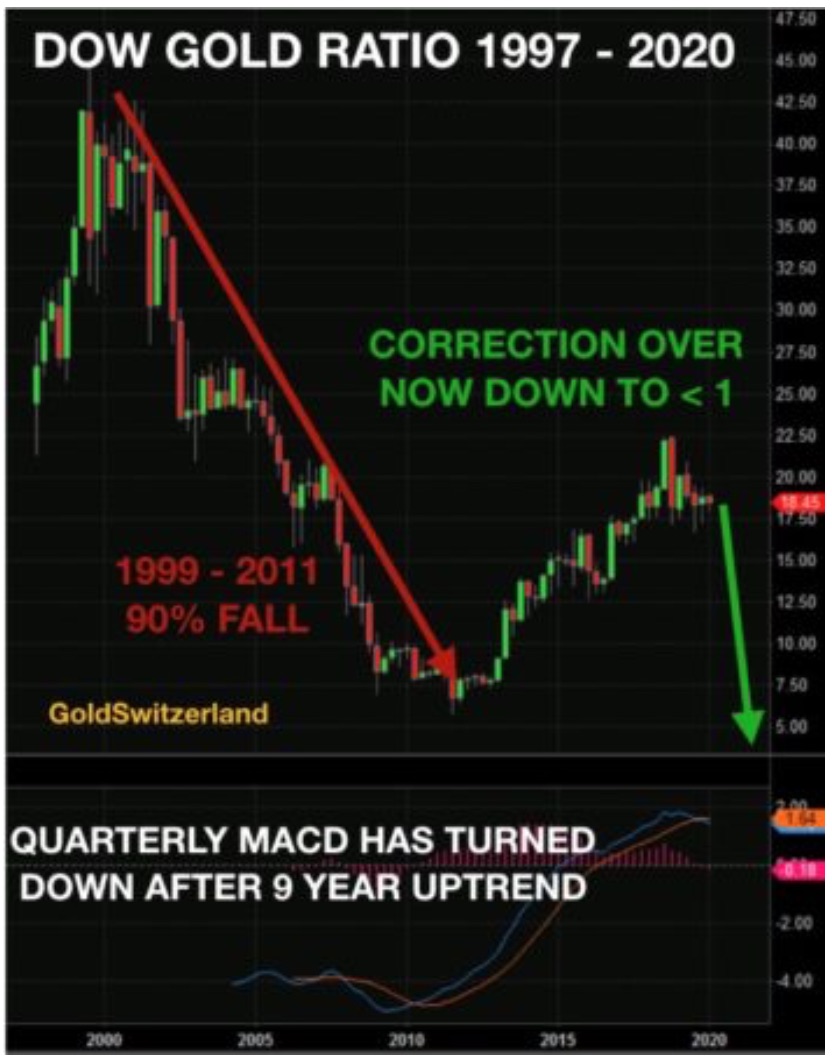 But the Dow/Gold ratio will only move down with force once the stock market has turned down. Our proprietary cycle theory, called MAMCYCLE, forecast already in 2018 that the Dow would top in January 2020 and most probably in the second week. The top January 17th fits that forecast perfectly.  So based on MAMCYCLE, the January monthly close should not be  overtaken in a subsequent monthly close. Instead, a secular bear market in stocks is now likely to start.

The turn down in the Dow will also be the  start of a rapid fall in the Dow/Gold ratio and thus a very strong move up in gold.

For information, the MAMCYCLE system forecasted the top in gold in September 2011 which I mentioned in a published article, well before the top, in the spring of 2011.

So the 2020s will be a dramatic decade starting at any time. The financial system will not survive in its present form and nor will any currency. This is why we will see inflate and die as a depressionary hyperinflation takes hold of the world.

Gold will reflect the coming cataclysm and probably reach Jim Sinclair’s $50,000 or much higher in hyperinflationary money.

So I urge investors to hold physical gold because:

Gold is money, gold is insurance and gold is financial survival…For those who would like to read more of Egon von Greyerz’s fantastic articles CLICK HERE.

Global Worries
ALSO RELEASED: This Is What Had Investors Across The Globe Worried CLICK HERE TO READ.