The man who has become legendary for his predictions on QE and historic moves in currencies and metals told King World News that the world may be entering a singularity event that will change our civilization to the extent it will become unrecognizable.

IS THE WORLD ENTERING A SINGULARITY EVENT THAT WILL CHANGE OUR CIVILISATION TO THE EXTENT THAT IT WILL BECOME UNRECOGNISABLE?
June 13 (King World News) – Egon von Greyerz, Founder of Matterhorn Asset Management (based in Switzerland):  I am not talking about Klaus Schwab and his motley WEF crew and their plan to make everyone happy without owning anything and then be controlled by AI (artificial intelligence). I have always bellied that they will fail, primarily because the world economy is about to implode with long term and devastating effects for mankind.

So is that singularity event now starting with financial markets waking up to reality?

Stocks, bonds, property and cryptos are all down by massive percentages. (See table below).

There is panic in markets and already some blood in the streets. But this is just the very beginning. Much more panic and blood to come.

The era of dip buying has ended and everything is collapsing.

Both private and institutional investors are totally lost. All sectors are falling together. There just is nowhere to turn.

Just look at the table below: 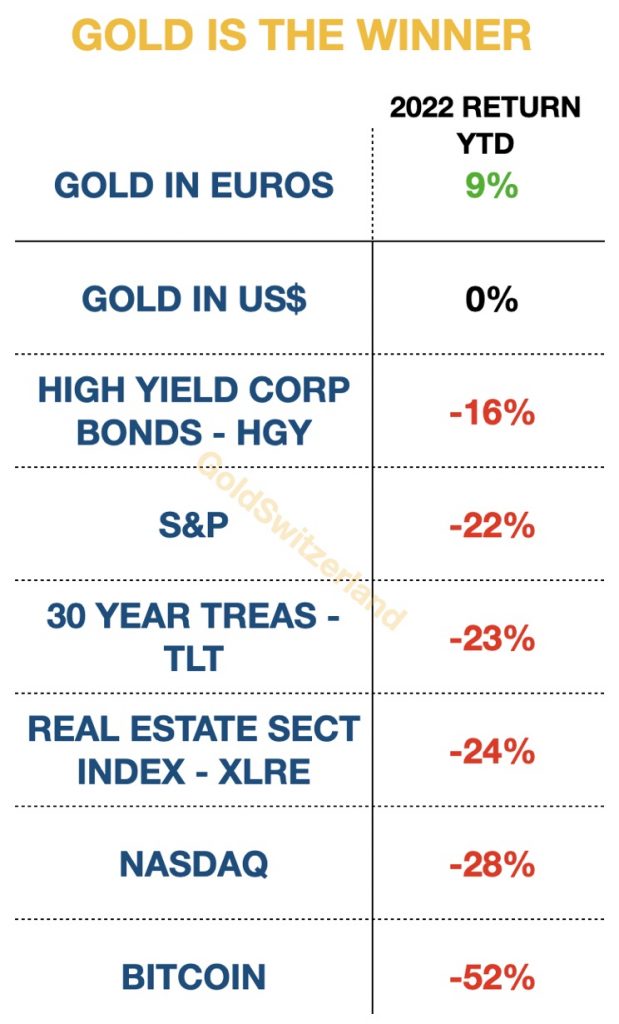 Gold in euros and in most other currencies have had positive return in 2022 so far.

But just look at the rest – from Corporate Bonds to Treasuries to Stocks, Real Estate, Tech Stocks and Cryptos etc they have all seen double digit losses in 2022 from 16% to 52%.

And nobody realises that this is just the beginning…

The majority of investors are totally paralysed. They are all hoping for the rapid April 2020 recovery but they will be very, very disappointed. IT JUST WON’T COME!

But investors are neither mentally nor financially prepared for what is coming.

The selling we are currently seeing is just on the margin. Most investors are staying put and will ride the market down by 50% or more before they realise that this is serious. And at that point they will hope and pray since they will believe it is too late to get out.

Sadly no one will understand that it is really different this time and that most asset classes will fall by 90% or more in real terms.

Epic super bubbles can only end that way. But no investor has experience in such a bubble since it has never happened before in history.

I have discussed the consequences in many articles and they will be devastating.

Sadly Cassandras are never taken seriously until it is too late. This time will be no different.

And don’t believe there is anyone there to help. The Fed which has reacted at least 10 years too late in tightening will not save investors. Instead they will offer more pain in the form of higher rates and more tightening.

Yes, of course the Fed will react at some point and in panic lower rates and inject fake money into the system. But that will be much too late. Also, no amount of fake money can  save a system which is morally and financially bankrupt.

So the  scene is set for a Singularity of frightening consequences with the:

“Perfect Global Economic & GEOPOLITICAL Calamity”
Let’s look at some of the preconditions that will set this calamity off:

“The great rule of conduct for us in regard to foreign nations is in extending our commercial relations, to have with them as little political connection as possible.”

“I do wish  someone would tell me what would be the use of large standing armies and powerful navies if trade were free.” — (Frédéric Bastiat 1801-50)

So when free trade is the most  prosperous activity that the world could be involved with, why is mankind more inclined to be involved in disastrously costly adventures such as wars.  The consequences are at so many levels, human, financial, commercial and generally destructive.

The above list of preconditions is far from exhaustive.

But the 20 points together are clearly the nuclear bomb that will annihilate the world economy and end the Everything Bubble creating a Singularity Event.

What has always been clear to us is that the Bubble would end in a spectacular fashion.

As we have repeatedly said, it is not just a question of the bubble losing a bit of air.

No it will totally implode. Whether that means a 90% or a 95% fall of most markets is irrelevant. Remember that in 1929-32 the Dow lost 90% with preconditions that were of nowhere there the magnitude that we are now looking at.

So what can we do? Singularity Events are of a magnitude that they just cannot be stopped.

A morally and financially bankrupt Western World  has sadly created this coming calamity and will now have to suffer the consequences.

But it must be said that this is the only way that it can end. A rotten and debt infested system can only end in a calamity.

Debts will implode and assets will implode. Society will not function nor will social security, pensions etc. This will create human suffering of a magnitude which will be devastating for everyone. Global population will also come down dramatically. In the mid 1800s there were 1 billion people on earth with very slow growth for the previous thousands of years. Then population exploded over the next 170 years to 8 billion. A chart that look like a spike up normally always corrects up to 50%. The reasons are obvious, economic collapse, misery, famine, disease and wars.

Such a singularity event is necessary for the world to clean up the rotten system and start a new era with green shoots and stronger moral and ethical values.

For the few people who have assets to protect, physical gold and some silver will perform much better than all conventional asset markets which will collapse.

But your most important assets are your brain and heart and soul. There are always opportunities for individual who apply those assets wisely.

Most important is to have a group of family and friends who look after each other…This will link you directly to more fantastic articles from Egon von Greyerz CLICK HERE.

OUTCROP INTERCEPTS 1.85 METRES OF 7,609 GRAMS SILVER
Outcrop Silver & Gold Corp. has released additional results from Las Maras target, including drill intercepts of 1.85 metres of 7,609 grams silver equivalent per tonne, including 0.54 metre of 11,927 grams equivalent silver per tonne, and 4.69 metres of 909 grams silver equivalent per tonne. These intercepts represent the highest-grade and thickest intercepts respectively drilled on Santa Ana to date. Las Maras remains open along the surface and at depth.

“The results from Las Maras provide our best drill intercepts in terms of both thickness and grade to date on the Santa Ana project. Outcrop believes this is an indicator of significant upside to the quality of discoveries on Santa Ana,” comments Joseph Hebert, Chief Executive Officer. “We have eleven high-grade shoots that accumulate over 2.8 kilometres length of potential resource areas to include in a compliant resource before the end of 2022. Also prioritized targets are being generated and drilled within an area twice the scale of that drilled on to date.” Outcrop Silver & Gold, symbol OCG in Canada and OCGSF in the US.