As the world edges closer to the next crisis, today the man who has become legendary for his predictions on QE and historic moves in currencies warned King World News to expect terror in 2019 as bank bail-ins begin in the West.

Big Changes Coming In 2019
January 14 (King World News) – Egon von Greyerz:  “In 2019 the investment world will start to realize that asset markets don’t grow to heaven as stocks, bonds, and property, start their long journey down which will eventually lead to declines of 75% to 95% in real terms (vs gold). But the major risk is not just investment markets. Just as important is counterparty risk, which too few investors are concerned about.

Anyone who wants to protect their wealth should not be invested in any of the bubble asset markets as I have stated in many KWN articles. But to also avoid counterparty risk is a lot harder. It is clear that it will be extremely hard to navigate investment markets between Scylla and Charybdis (a rock and a hard place). For the few investors who early on get out of the risky asset markets fueled by credit expansion and money printing, many other dangers remain…

Egon von Greyerz continues:  “Counterparty risk is the risk associated with the other party to a financial transaction not meting its obligations. The average investor never worries about counterparty risk because “banks are always safe.” And “government bonds are the safest investment you can buy because governments can never default.”

“Quiet On The Financial Risk Front”
Today, investors, both private and institutional, are facing the biggest risk in investment history and virtually no one is aware of this. The 2007- 9 financial crisis and the fall of Lehman alerted investors to the risk of counterparties failing, but since 10 years have passed, it all seems quiet on the financial risk front. But things are far from quiet below the calm surface. Once the next crisis starts, not a single bank will ever repay their depositors and no government will be able to repay their debt with real money. 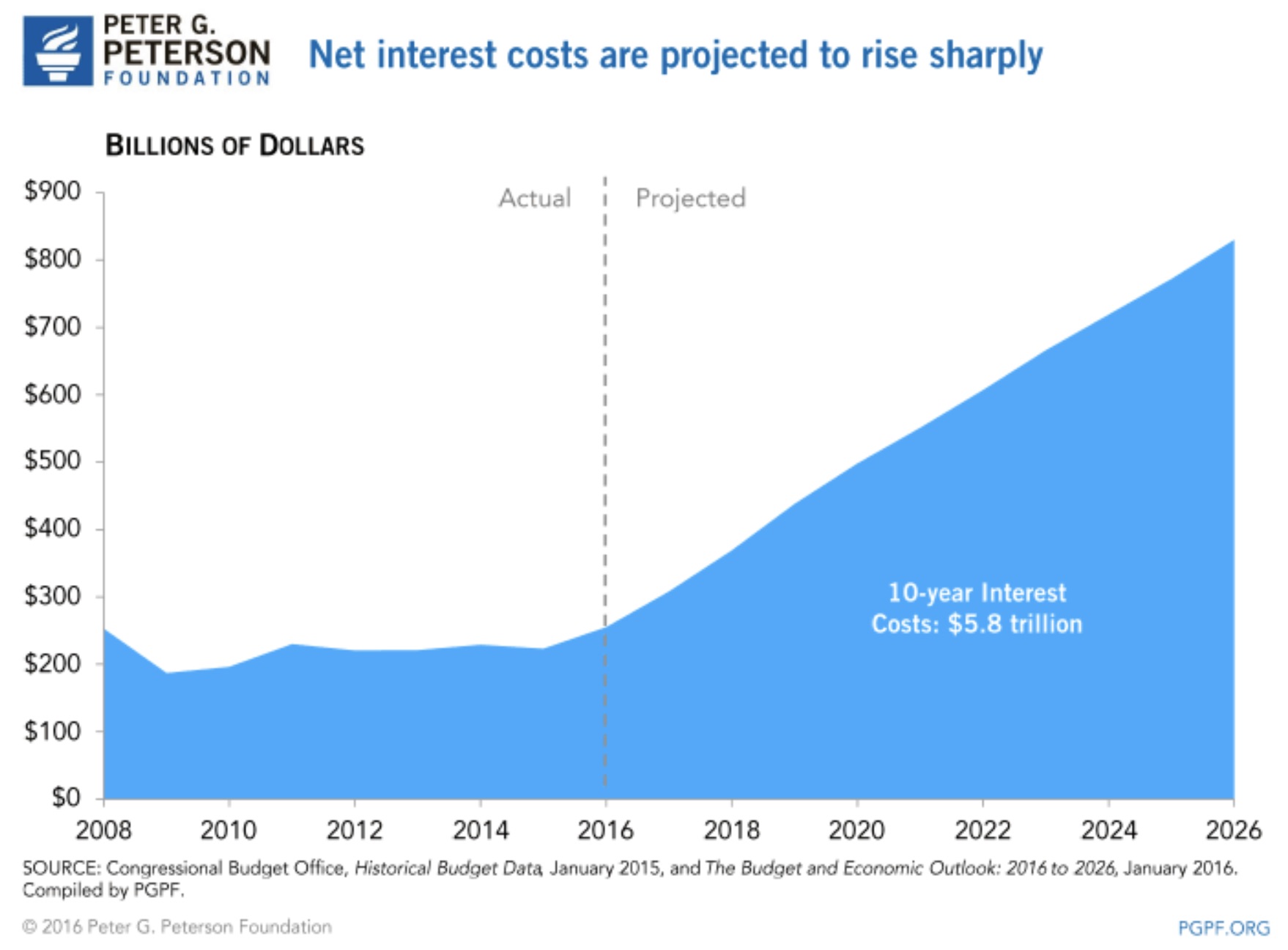 A World Drowning In Debt, Including The U.S.
Let’s first consider the US government. For 60 years the US federal debt has increased every year, with two minor exceptions in the 1960s. The Clinton surpluses in the 1990s were fake since debt continued to increase in those years. So here we have a government that couldn’t make ends meet for well over half a century. In 1958, when the deficits first started, the US debt was $280 billion. Today it is almost $22 trillion. That is a 75-times increase. Currently the US deficits are running at more than $1 trillion per year and that is very likely to at least double very soon. Since Reagan became president in 1981, US debt has, on average, doubled every 8 years. Trump inherited a $20 trillion debt, and if the trend continues, the US debt will be at least $40 trillion in 2028, regardless of who is president at that time. In addition, both consumer and corporate debt in the US are at record highs.

The US is the most indebted country in the world, but debt is a global disease. In China, total debt has grown from $2 trillion in 2000 to $40 trillion today. Japan is just as bad. With government debt at $1 trillion (250% of GDP), Japan would default if rates increased by 0.5%. In Europe, the Mediterranean countries, with Italy being the worst, are borrowing heavily, mainly financed by the ECB and German banks. But we only need to look at the balance sheet and share price of Deutsche Bank to realize that the German banking system is also on the verge of collapse. And so it goes, with most emerging markets heavily indebted and also unable to ever repay their debts. If we then add derivatives at $1.5 quadrillion, we know that global debt and liabilities will implode into a black hole and cause asset prices to collapse. 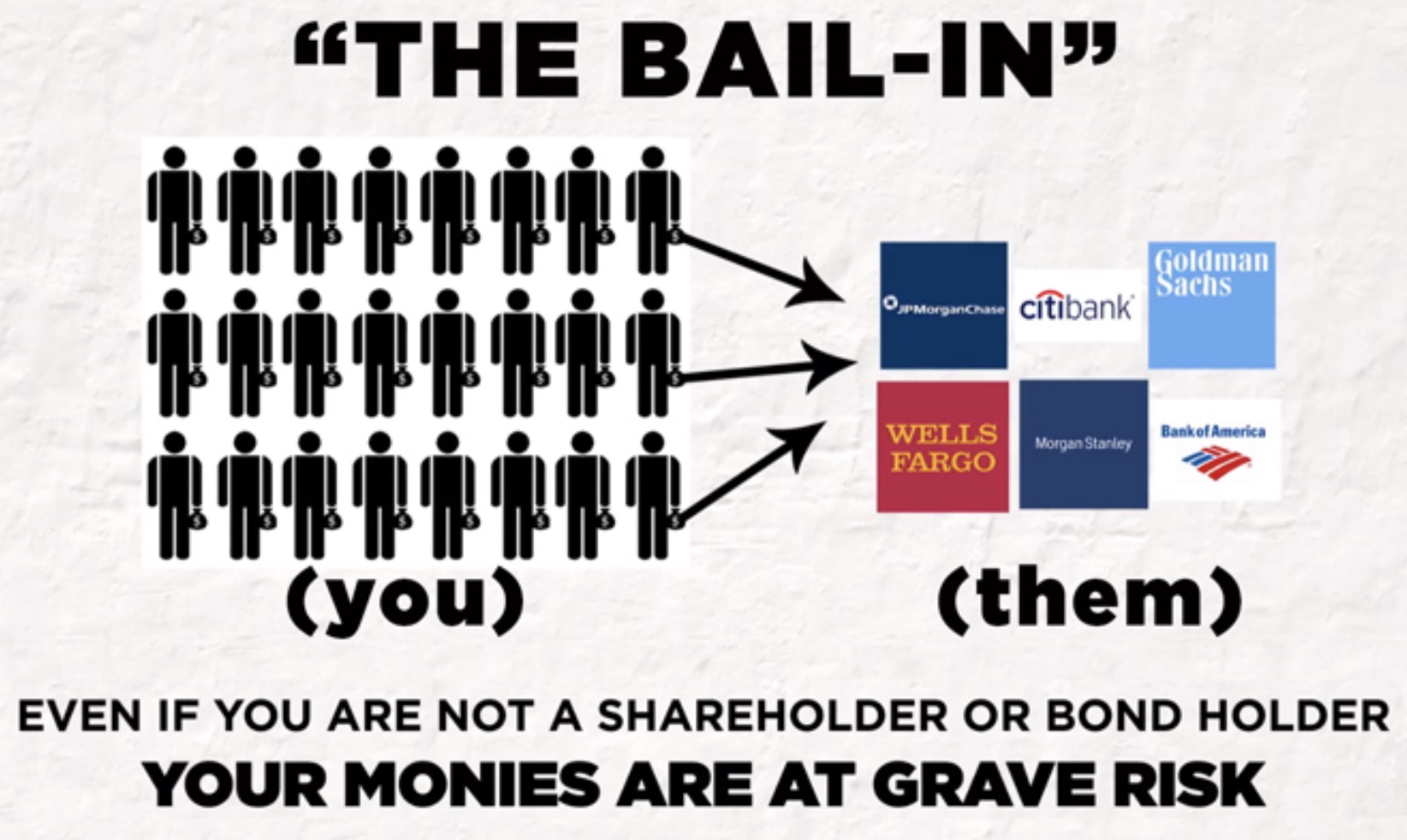 Bank Bail-Ins Are Coming
Coming back to risk, the few investors who shrewdly exit the overvalued asset markets before they collapse, must then consider what to do with their money. This is where counterparty risk must be carefully evaluated. Sovereign bonds are clearly a very bad risk since neither capital, nor interest, will be paid in the end. And the banking system is a terrible risk. With leverage of 10 to 50-times, banks will be unable to meet their obligations to depositors and clients. Thus, money will first be bailed in and eventually lost as the bank defaults. If governments try to save the financial system again, it is likely to fail this time. Global debt has doubled since the last financial crisis started in 2006 and printed money will be worth less than the paper it is printed on or the electricity required to create electronic money. So any fresh money fabricated by governments will just debase their currency to ZERO.

This leaves the dilemma for investors as to what to do with their money. Of course there are assets that will not lose the majority of their value such as hard assets, commodities — including food, precious metals and mining stocks. The key will be to hold these assets outside the financial system. Otherwise a systemic failure would either freeze the assets for an extended period at best, or at worst they would be lost as counterparties fail.

The best wealth preservation asset is precious metals. Gold and silver are both a store of value and a medium of exchange. In virtually all periods of crisis in history, precious metals have always been used as money or barter. There is no other asset which provides instant liquidity at a known market price. Precious metals must obviously be held in physical form and outside of the banking system. Preferably, they should be held in a safe jurisdiction where there is rule of law, and not in the country of residence of the owner. This is to avoid confiscation and the possibility to leave the country of residence if security, politics, or an oppressive regime, necessitates a move.

“This Is Absolutely Not Acceptable”
To store gold and silver at home is not a good idea. A criminal can always find it, using violence. If you store any valuables at home, which I would dissuade, it should not be more than you can afford to lose. It is much better to store it in high security vaults in countries like Switzerland and Singapore. It is also essential to have as few counterparties as possible, but there must always be one. If you hide your money or gold in the ground, the hole will be your counterparty and someone might steal it or you might forget where it was. But if you store your metals in a high security vault, you must have direct ownership and access to your gold and silver bars without going through a middleman. Most companies that organize vault storage do not allow direct access without their approval or often not at all. This is absolutely not acceptable.

Many people ask us what percentage of financial assets to hold in metals. We advised up to 50% back in 2002 when gold was $300. That might be more than many people will be comfortable with. Most of our clients have at least 25% in precious metals. It is no use holding only 10% of your wealth in precious metals when risk is extreme and you expect major problems in the financial system. My recommendation is that investors should at least hold enough gold and silver to fall back on if their other assets should collapse or become illiquid. As I showed in my article two weeks ago, gold is now as cheap as it was in 1970 (at $35) and in 2000 (at $250). Thus, this is the perfect time to acquire physical gold and silver for wealth preservation purposes.

What is interesting to note is that the Swiss gold refiners, who produce 70% of the gold bars in the world, are reporting very slow business in December and also, so far, in January. In spite of this, gold is up $75 since early December. 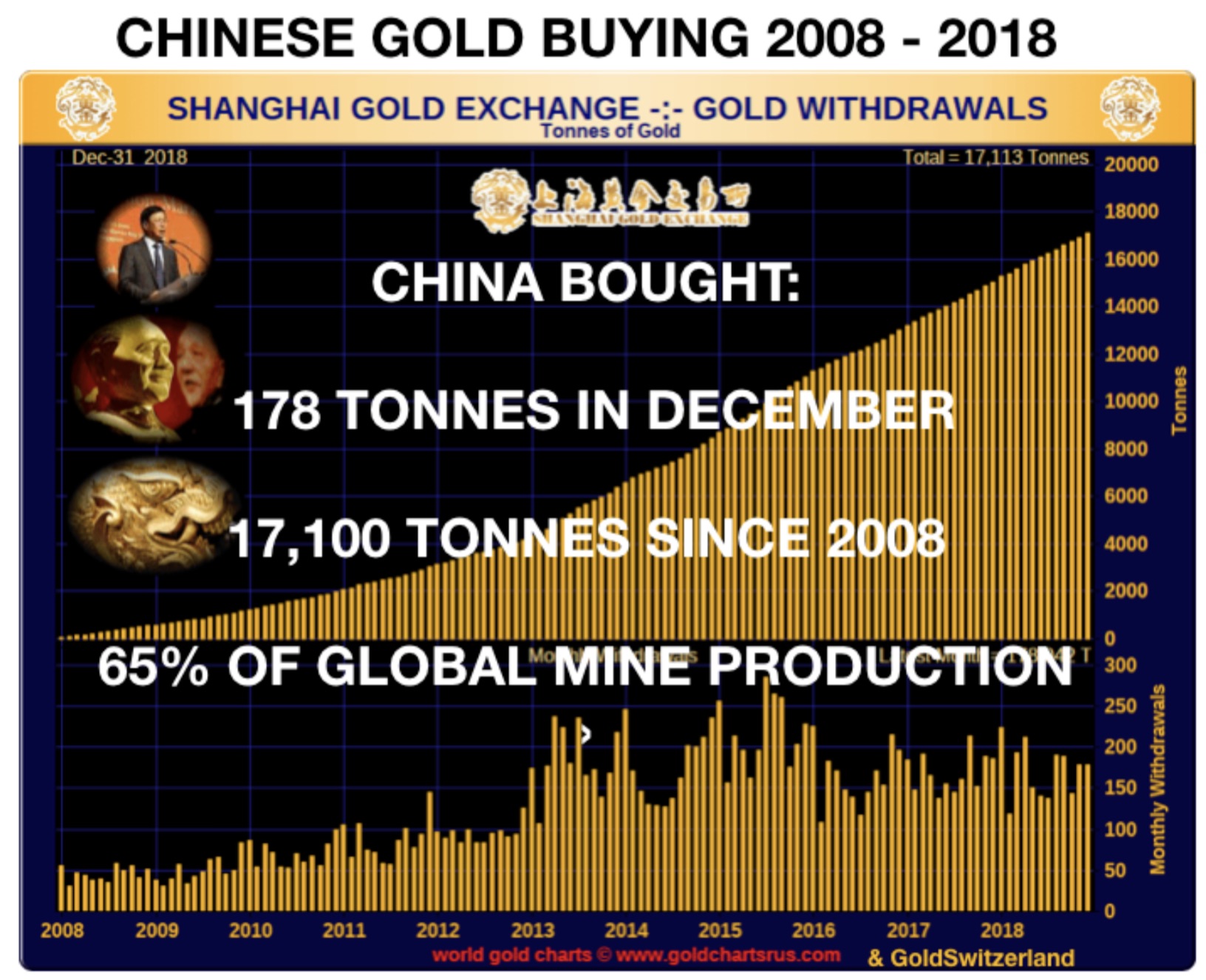 But China is continuing to increase total gold holdings as the Chinese acquired another 178 tonnes in December, taking the total to 17,100 tonnes. And the East as a whole is also continuing to accumulate gold at an increasing pace. While the West hasn’t got a clue that the financial system and currencies are on the verge of collapse, the wise people in the East understand the vital importance of wealth preservation and also that “money is gold and nothing else.”

Expect Major Changes In 2019
Looking at investment markets, there will be major changes in 2019. Stocks have turned down and so has the dollar. Gold and silver are on their way to new all-time highs. It looks like the next major fall in stocks is imminent as well as the next major move up in the metals. But wealth preservation investors should not be concerned with the short-term price movements, but instead hold physical gold and silver as insurance against an investment and counterparty risk that is greater than any time in history…For those who would like to read more of Egon von Greyerz’s fantastic articles CLICK HERE.

Gold Back Above $1,500 As Crude Oil Consolidates Gains, But Take A Look At This