As the world edges closer to the next crisis, today the man who has become legendary for his predictions on QE and historic moves in currencies, spoke with King World News about the end of an era and the road to $17,200 gold. 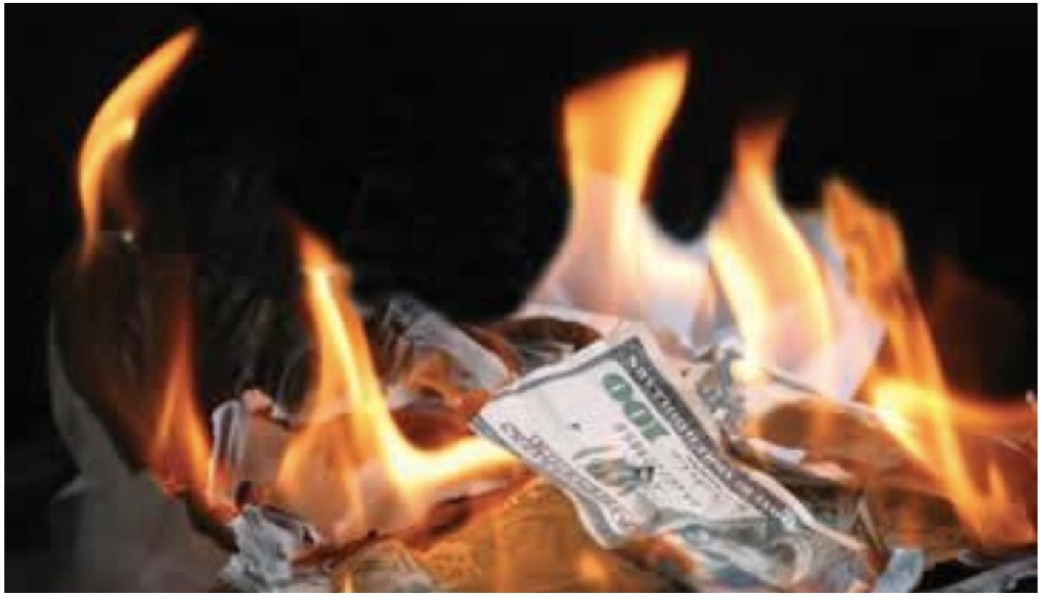 The Meltdown Of The Fake World
November 4 (King World News) – Egon von Greyerz:  In a world based on fake paper and fake electronic money as well as fake asset values, the real significance of gold has gotten lost. With endless credit expansion and money printing, all asset prices have exploded and investors have made fake profits that seem real. But the imminent secular downturn of debt and asset markets as well as the world economy will reveal how unreal these profits were as 90% or more of all the paper wealth in the world will go up in smoke. So investors should now prepare for the biggest wealth destruction in history and also the biggest wealth transfer….

Egon von Greyerz continues:  “Gold is not an investment, it is the only money that has ever survived throughout history. So anyone who just buys gold to make speculative profits does not understand the significance of gold. For 5000 years gold has been a medium of exchange and a store of value. These attributes are unlikely to change in the foreseeable future as it is a tradition based on sound values and principles which has lasted for millennia.

Having invested significant amounts into gold for clients and ourselves at the beginning of 2002, at $300 per ounce, not once since then have we had any concern that this bull market was over. In the late 1990s, when gold was totally forgotten as well as unloved and undervalued, it was clear to me that buying gold would be extremely low risk.

As a matter of fact, gold is always low risk to hold, whenever you buy it because governments and central banks give a permanent guarantee to underwrite the gold price. They do this by continuously issuing credit and printing money, which guarantees that over time the gold price will always go up measured in fiat or paper money. As a result, governments also guarantee that paper money will always be debased until it reaches zero, as it has throughout history. 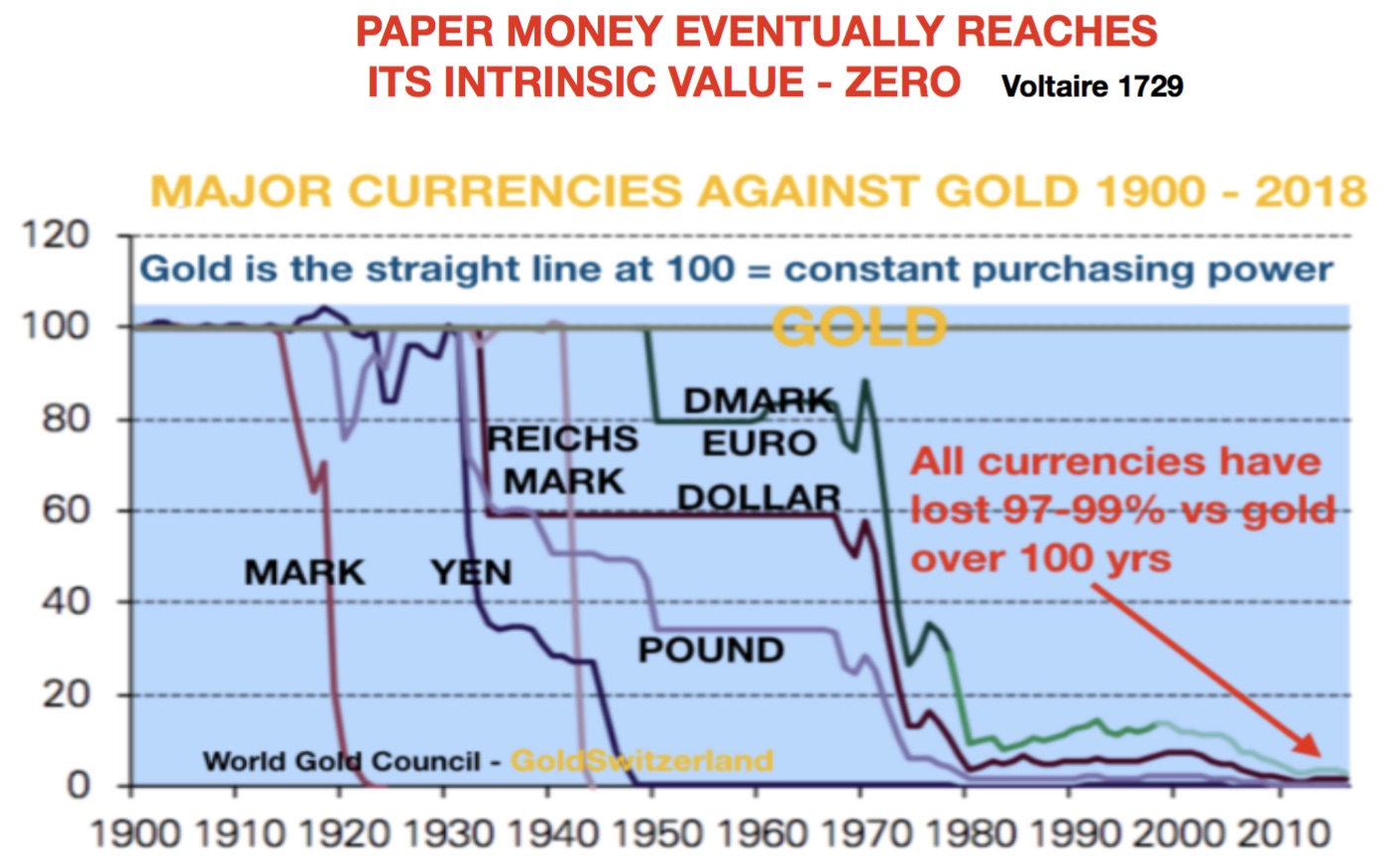 Therefore, anyone who buys gold should know that they can’t lose as long as they have patience and are holding it for the right reasons. For the people who buy gold for speculation, many will buy high and sell low. Very few, except for the wealth preservationists, even looked at gold in 2000 or 2002. But as gold doubled to $600 in 2006 and then doubled again to $1,200 in 2009-10, more and more people bought the yellow metal. The best time to buy anything is when nobody is interested and the media isn’t talking about it. But the average investor will wait to buy until something has gone up substantially and becomes headline news. But whether you bought gold at $300 or $1,900, the good news is that it doesn’t matter because governments around the world will continue to guarantee that your gold will rise dramatically in value in relation to paper money.

There are periods when owning gold just represents a safe asset that holds its value but doesn’t appreciate in relation to paper money. These are the very rare periods of sound money when governments don’t spend money they haven’t got. But no one should be concerned that this is the period we are in now. Since Nixon took away the gold backing of the dollar in 1971, that was the ‘Eureka’ moment for all the central bankers. They now had a free-for-all for all to crank up the printing presses around the world and print unlimited amounts of money. From that day on global debt grew exponentially and gold went from $35 to $850 within 9 years.

Since 2006, when we saw the beginning of the Great Financial Crisis, global debt has doubled from $125 trillion to $250 trillion. If we include derivatives and unfunded liabilities, total global debt and liabilities are $2 quadrillion – 2.5 quadrillion. The current gold price in no way reflects this massive expansion of credit, nor does it reflect risk which has grown exponentially in the last 12 years.

Gold Will Go “No Offer”
As a wealth preservationist and long term holder of gold, we are not concerned about short term fluctuations or even extended periods of corrections which we have seen since 2012. But it is only natural and human that even the people who hold gold for the right reasons sometimes can be a bit impatient. It is clearly frustrating to see the gold price held down by a paper market which is 100s of times bigger than the physical gold available to cover the outstanding paper commitments. But chickens will always come home to roost. And when they do, all hell will break loose in the gold market. Gold will go “no offer,” which means there will be no physical gold available at any price. The longer it takes for this to happen, the bigger the move will be. The inevitable always happens, that is the law of nature and the law of supply and demand. In a market with a strong and persistent demand for the physical or real product and very limited supply, except for fake paper gold, it is guaranteed that the market will break at some point.

As wealth preservation investors we are not really concerned that the market takes its time to reveal the real truth. We know it will come. So we can afford to wait patiently. But it now looks like our patience will soon be rewarded. The gold market correction bottomed between 2013 and 2015 depending on which currency you use to measure the bottom. Since then gold has spent a long time gathering the energy for the next leg higher in this long term bull market. Technically it now looks like that the waiting period is finally over and the explosive phase of this market is about to start. If this analysis is correct, we will soon see a quick move to $1,350 and then straight on to above $1,650. How long it will take to get to the all time high of $1,920 is hard to say, but it is very clear that we will reach that level in the not-too-distant future. Thereafter, gold will go to $3,000, $5000, etc, on its way to levels that no one can imagine today.

With the gold/silver ratio rising above 85 in the last few days, we know that this area is likely to be rejected once again, In fact, this alreadyseems to have happened. As I have said previously, the metals will only start a sustained move if silver is the leading metal and that is now likely with another rejection of the 85 level in the ratio. Once the metals move up in earnest, silver is likely to surge twice as fast as gold as the ratio collapses. 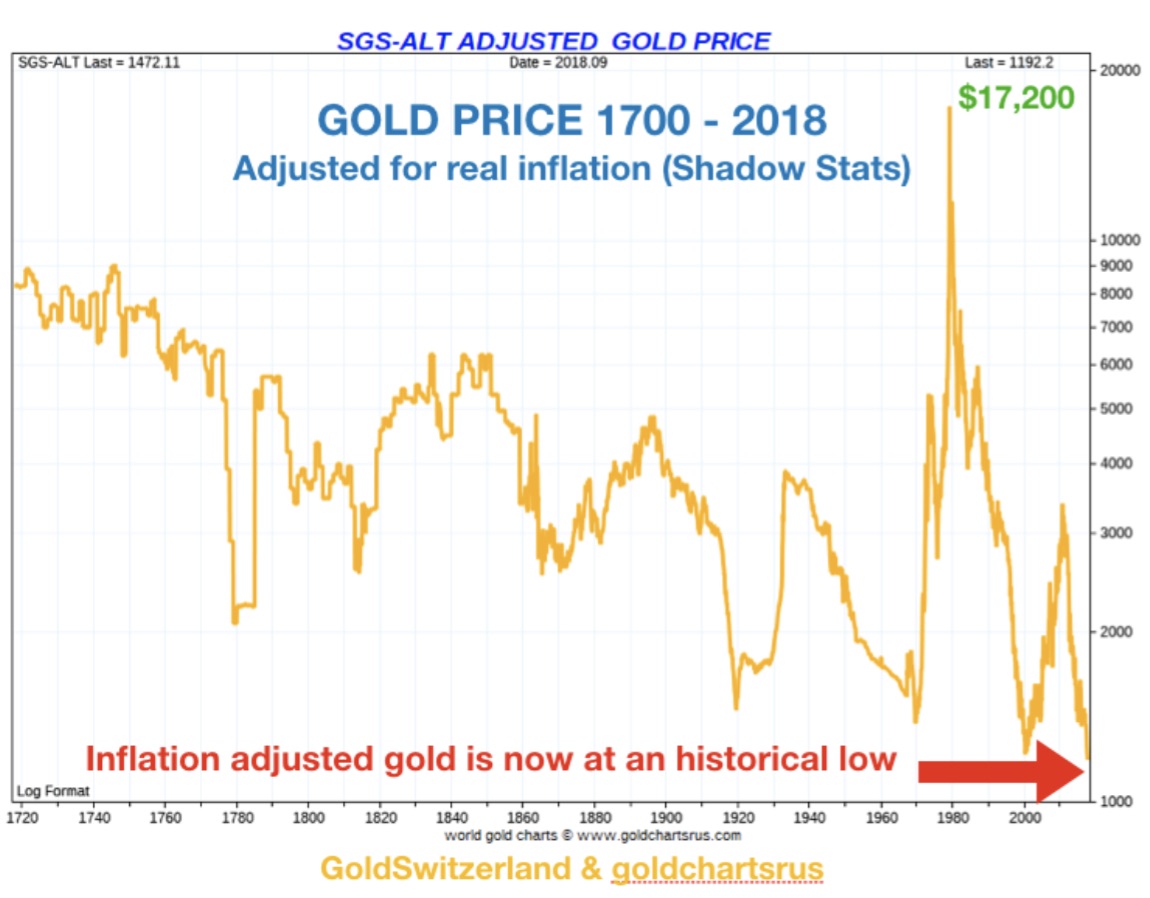 $2,950 & $17,200 Gold
On an official inflation-adjusted (CPI) basis, the 1980 high in gold today would be $2,950. Based on the Shadow Statistics real inflation figures the 1980 gold high would today be $17,200 (see chart above). Even more significant in this chart is that inflation-adjusted gold is now at a historic low and thus an absolute bargain.

So the scene is now set for the next explosive rally in gold and silver as well as platinum and palladium. Most investors will be left behind as they fail to catch the early, fast gains. They will wait for pullbacks but miss these lower entry points as well. Thus, many people will not catch the Gold Wagon until much higher prices. 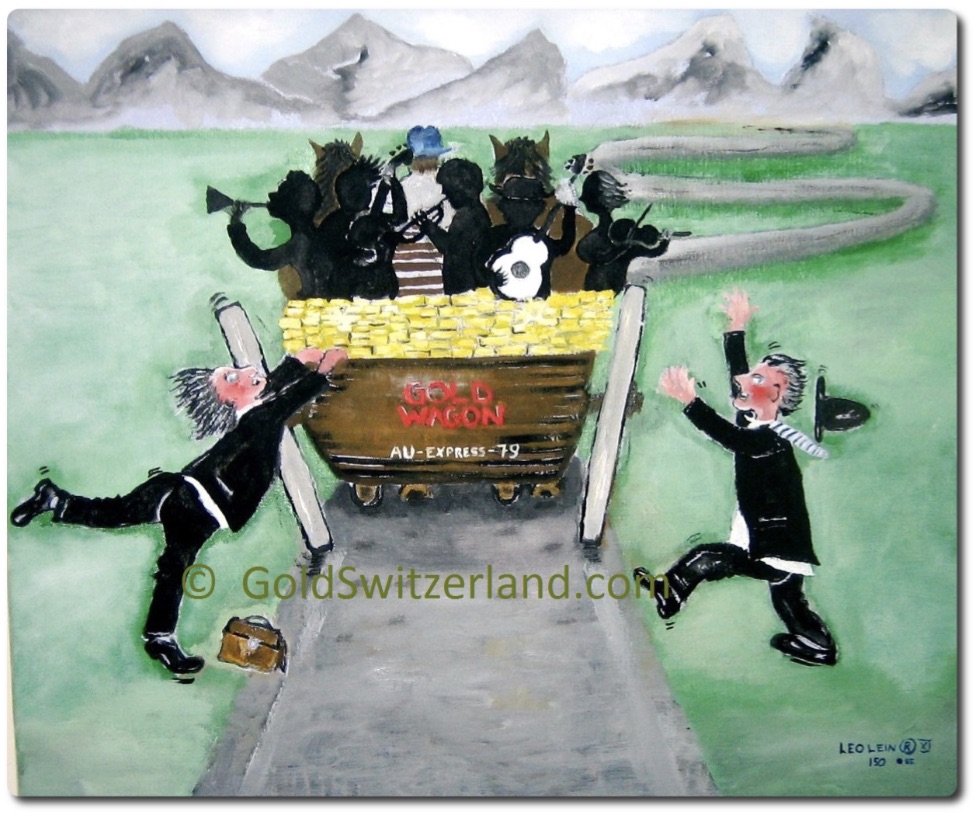 The next few weeks could be significant in markets. The mid term US election seems to coincide with several cycle and technical indicators. My view is that events don’t actually cause market turns but only act as catalysts for things that would have happened in any case. The coming election could trigger not only a rally in the precious metals but also a crash in the stock market as well as a dollar turn to the downside. It is of course possible that this turn, which seems imminent, will take longer to develop. That would not change the bigger picture but only the timing.

For the long term wealth preservationist, it really doesn’t matter if a major turn starts next week or sometime later. Global risk is greater than ever in history and the times of easy gains in markets are gone. Now is the time for protection of wealth and being out of stock and bond markets as well as paper money. Investors should instead hold real assets and keep them outside the financial system.

Yes, precious metal mining stocks are likely to explode. But they are held within the financial system and therefore are subject to both counterparty risk as well as the risks of any paper asset. Thus, holding these stocks is a lot riskier than having real tangible assets like gold and silver outside the financial system.

Everywhere we now look we see risk escalating dramatically. And risk is not just exposure to junk bonds, equities, and real estate. No, risk is exposure to all debt, especially government debt, student debt, auto debt, mortgage debt, and other consumer debt. Risk is also Brexit, the EU — which will not survive — trade wars, unfunded and funded pension liabilities, etc. When asset markets collapse, even well funded pension funds (which is very rare) will lose most of their assets. Risk is also a war with Iran or Saudi Arabia or the in the South China Sea. The likelihood of social unrest is also increasing around the globe.

A major risk is also China. The Chinese economy is built on debt levels which are unsustainable. A lot of this debt has been spent on wasted infrastructure projects. Growth in China has slowed down dramatically. The real figures are probably a lot worse than the official ones. Trump is determined to break China’s unfair competitive advantage. That can seriously hurt an economy which is already suffering. If the Chinese economy collapses, there is a risk of empty stomachs leading to a revolution. As we know from Chinese history, this is not as farfetched as it might sound.

The End Of A SuperCycle
Whether global stock markets begin a major secular bear market in the next few weeks or months is irrelevant. What is clear is that we are at the end of a supercycle of several hundred years. Once it turns, the down cycle is likely to last for decades and be devastating for the world.

Global debt has tripled since 1999 to $240 trillion. Before the coming secular downturn is over, the majority of this debt will have disappeared along with the associated assets. 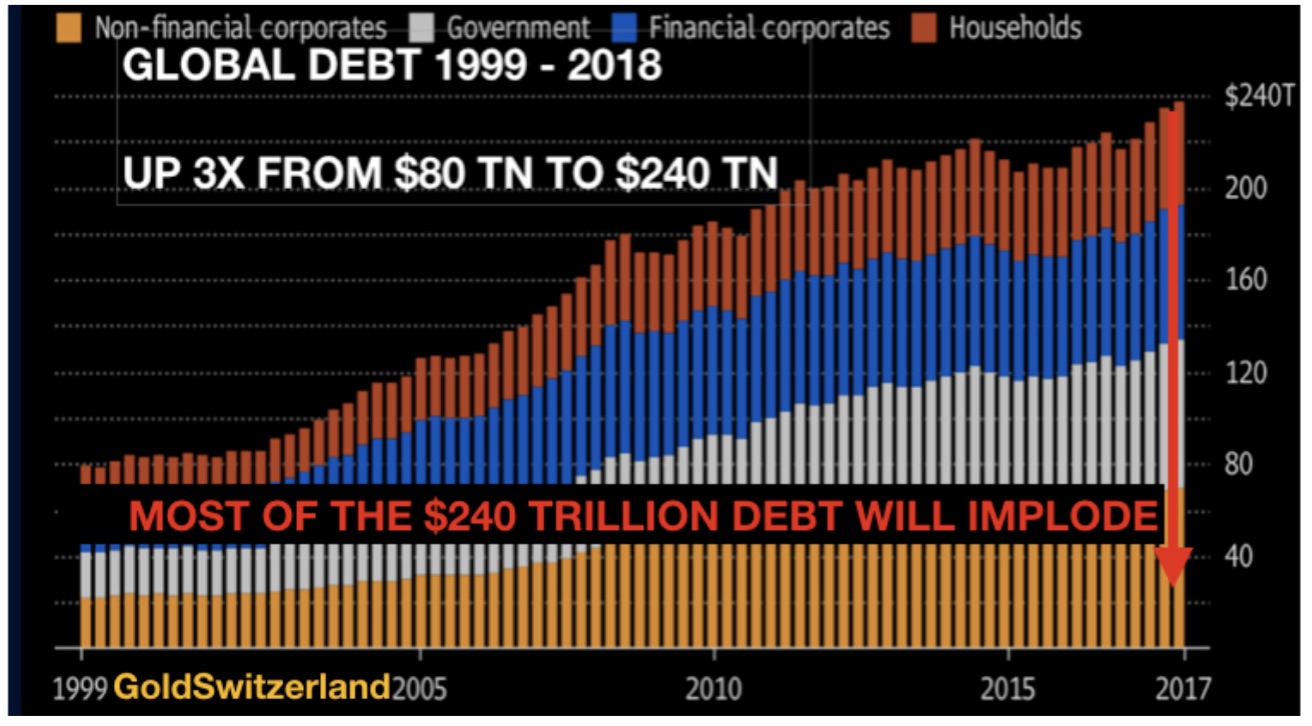 The End Of An Era
But if this happens, it will not be the end of the world, just the end of a major era. An era that has been exacerbated by governments’ and central banks’ interference with the cycles of nature and the natural ebb and flows of markets. It will be horrendous and effect us all for several decades. The implosion of the massive debt bubble as well as the asset bubbles is the only chance for the world to regain a sound platform for continued progression. Until the debt has disappeared, there can be no real and sound growth.