September has certainly kicked off with a bang, but world markets will only become more violent as the global financial crisis is set to escalate.

With this holiday shortened week and the end of summer, there will not be an audio interview this weekend, but audio interviews will resume next week.

Global Financial Crisis Set To Escalate
September 7 (King World News) – Jeff Snider at Alhambra Partners:  “Chinese monetary authorities announced today what will be for some of its banks a seventh round of “stimulus.” For the largest institutions, it will “only” be their sixth and the first one since January 2019. The PBOC has decided it is time for more RRR cuts. Effective September 16, the ratio all banks are required to hold of reserves will be reduced by 50 bps; applying to certain city banks, the decrease will be 100 bps.

It sounds like a flood of stimulus, enabling China’s beleaguered financial system to utilize more of its own stored up monetary resources. A lower RRR means they can put more of these reserves, more of their money to work in the Chinese economy. That’s how these measures are universally characterized. As you’ll see in every news report, the claim 50 bps RRR is equal to unlocking about RMB 900 billion “liquidity.”

While that may be technically true, it is still a lie of omission. What’s left out of the story is vastly more important. You are left with the misimpression that this is an effective surplus of funds which will be thrown on top of an otherwise static and stable condition. A net increase.

What’s really happening, and why RRR’s are a warning rather than stimulus, is that the 900 billion is meant to hopefully partially fill in a much bigger and more dynamic funding/liquidity gap that already exists.

This is both how and why come September 16 there will have been six rounds of such “stimulus” (7 for small and medium banks) and still there is a clear need for it. If it is stimulus it isn’t very effective. And the reason isn’t China’s trade spat with the US, it is the massive dollar hole which the Chinese just announced to the world they expect to get even bigger over the coming months.

We knew this was coming. How? Nothing more than overnight SHIBOR. As I wrote just a few weeks ago, China’s central bank was losing its grip on the all-important overdraft market. The RRR announcement is effective confirmation of the clear but unconfirmed SHIBOR peg (which may ultimately function more like a ceiling).

Again, there is no confirmation nor will there ever be. In my own opinion and analysis, I see China’s central bank getting backed further into a corner and having been left few appealing options it is just rerunning the playbook it used last time – even though it didn’t work out so well four years ago. For that reason alone you have to wonder just how few choices the PBOC has available.

To me, a pegged overnight SHIBOR rate represents another serious escalation in the eurodollar/RMB nexus, the great monetary squeeze beyond the influence of any central bank. Not much good followed August 2015. China seems to be replaying a lot of August 2015 right down to its distracting trivia. 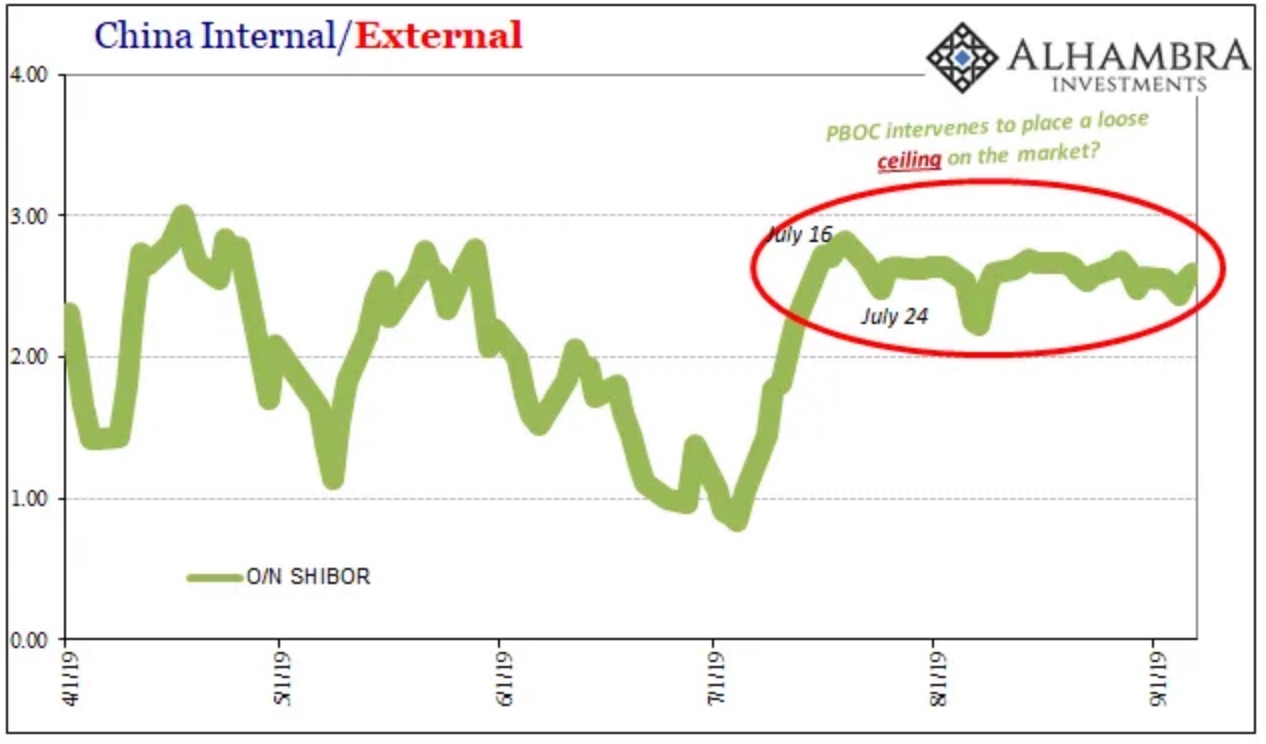 What that shows is how RMB liquidity was drying up all over again.

The sideways track to SHIBOR meant an escalation in this liquidity fight. Something had changed toward the end of July which had meant the central bank had to actively supply (via OMO’s) what the market no longer would – despite those previous RRR’s and trillions of previously unlocked RMB reserves. If the PBOC didn’t add this supply, the overnight rate in all likelihood would’ve skyrocketed.

We can only conclude something changed. A much bigger hole.

What the RRR’s are intended to accomplish this time is to make up for what the PBOC is now reluctantly supplying. They don’t want to peg (or put a ceiling on) SHIBOR. But it’s also gone on long enough that officials know without some other means they’re otherwise stuck doing this.

And that’s before factoring what will surely be an even larger dollar gap over the coming months. As I wrote last October, just before the global eurodollar landmine:

The RRR cut signals that the reserve problem therefore dollar problem is anticipated to grow worse. The PBOC is actually telling us that they expect in the months ahead the same or perhaps bigger commitment to “stepped up support.” CNY doesn’t need support if there is no worsening “capital outflow” situation of retreating eurodollar funding.

There is no mystery in any of this, merely layers of misconceptions piled one on top of another for no other reason than unexamined myths and short-hands. Starting with effective global dollar liquidity. We know right where China’s problem originates because you can trace it back to the source using nothing other than the PBOC’s very own balance sheet:

A World Hurtling Toward A Crisis 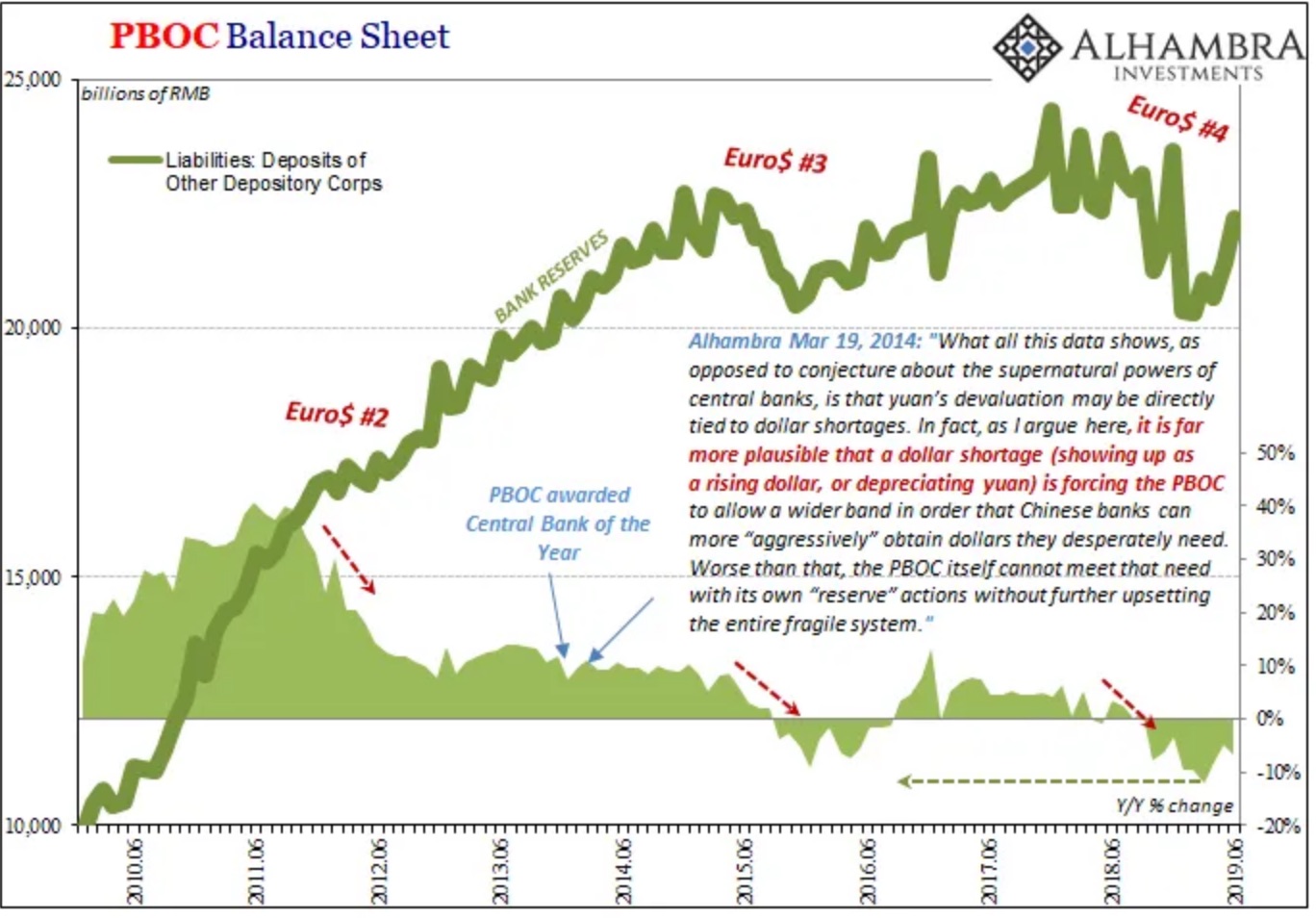 I’ve written many, many times over the years since 2014 how it is China’s central bank which may be, probably is, the most accurate indication of eurodollar supply and condition there is. You want to know about dollars, look to the PBOC; actions, not press releases.

A big and persistent dollar shortage is in actual practice what the mainstream today writes about the Fed’s QT in theory. Bigger dollar shortage means less dollar assets on the central bank balance sheet which has to be balanced by lower liabilities; in China’s case both currency issued and far more so bank reserves.

The RRR’s are supposed to offset that massive hole in bank reserves which only gets bigger the longer this goes. What SHIBOR shows us is despite mainstream claims to the contrary this isn’t an exact science. Far from it, it is a haphazard, ad hoc desperation toss because that’s all they have left in their toolkit. Fingers crossed, not mechanical precision. 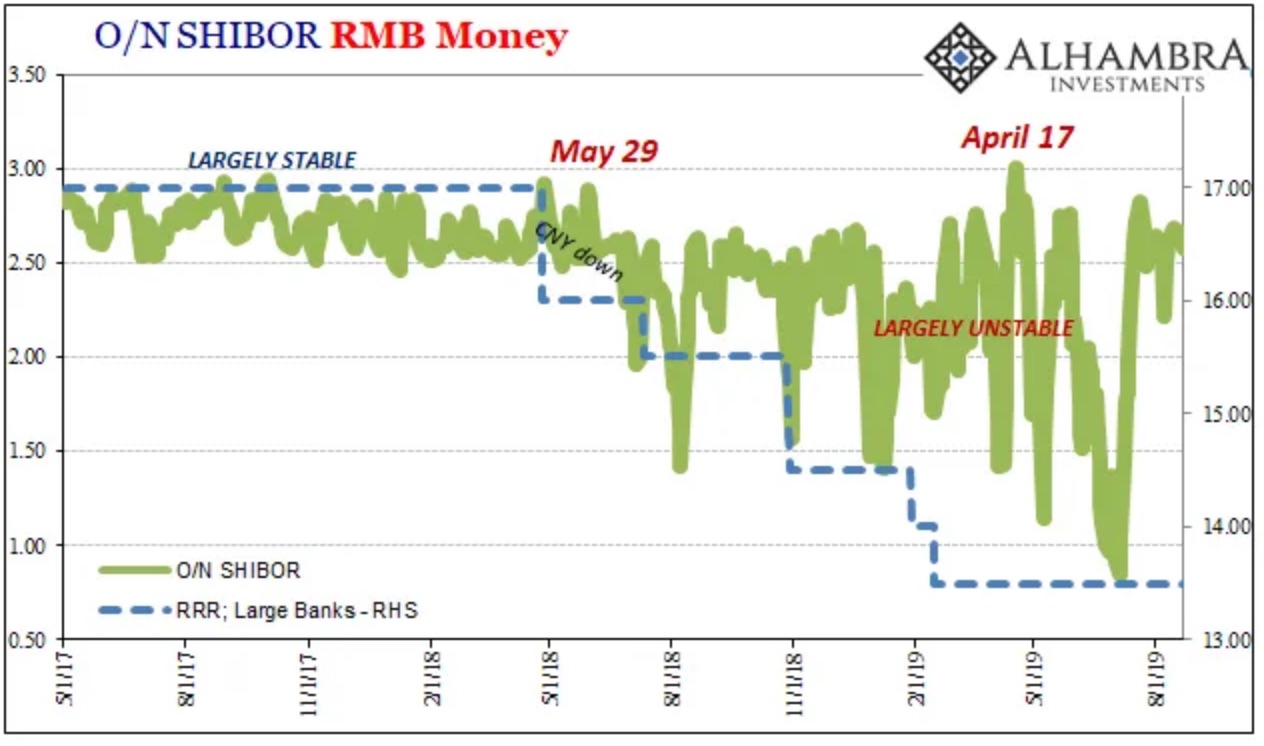 Warning: Global Crisis Will Escalate
This is exactly what you see in overnight SHIBOR: bigger dollar funding gap, less bank reserves, more RRR’s and an overnight rate that is all over the place. Or it was, before “someone” stepped in before August. Not only does it explain a lot about China’s economy, it fits the trend in dollar market indications (curve distortions), as well.

The real danger has always been bank hoarding; the PBOC counting on its domestic banking system to make up in RMB what the central bank can no longer supply and the banking system saying back to them, thanks but no thanks.

Like 2015, when the PBOC last intervened in SHIBOR, there’s the growing chance that China’s financial system even if given the privilege of using more of their reserves via RRR cuts they’ll choose instead not to – because of their own perceptions about risk and liquidity (and liquidity risk). Perceptions of things getting worse.

That much has already been implied by the sideways SHIBOR.

RRR’s are not stimulus. They are a warning. Escalation. 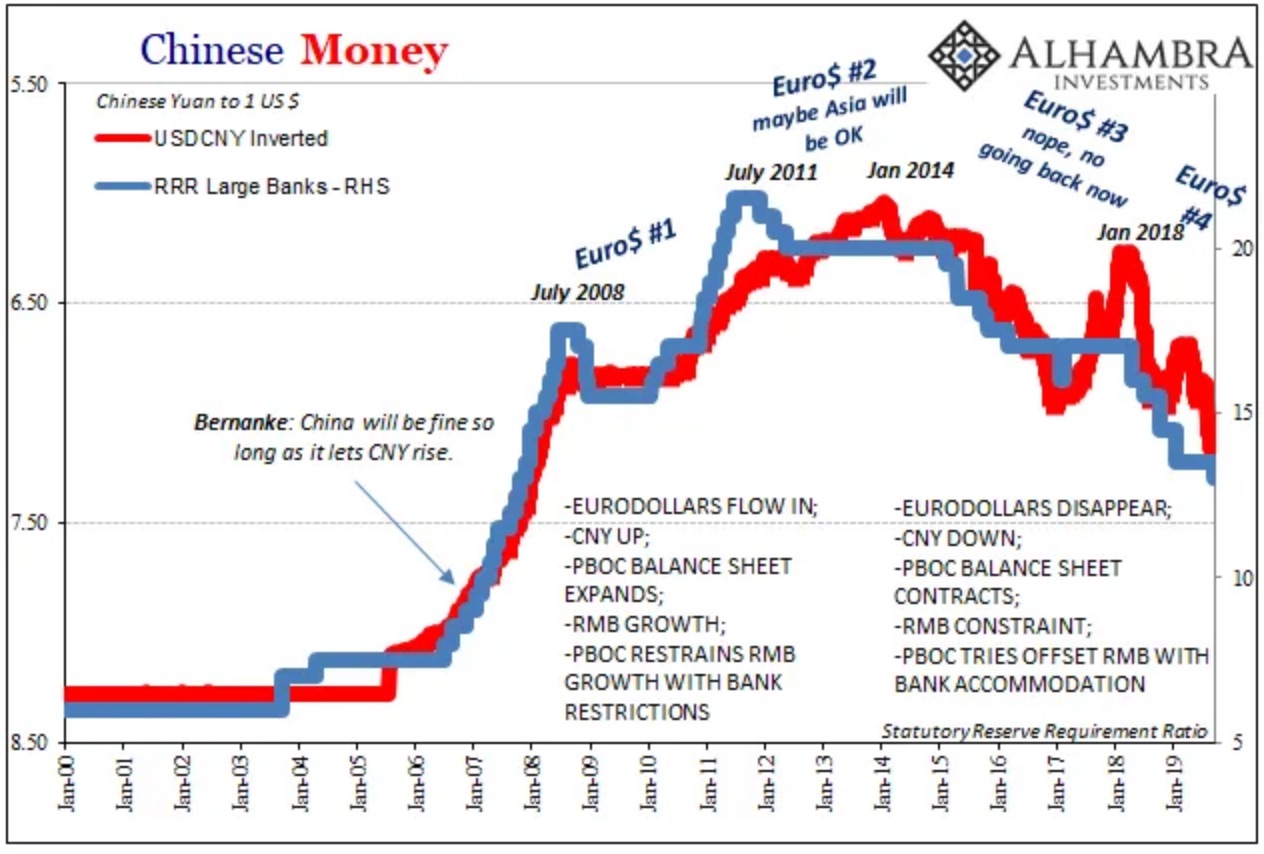 One Of The Greats Just Warned, “We Are At The Endgame” Plus An Update On Gold & Silver CLICK HERE TO READ

U.S. Scared To Death As China Just Secured Larger Flow Of Gold As Part Of Its Plan To Back The Yuan With Gold