On the heels of a poor jobs report in the US, the price of gold is surging $22 which is close to a major upside breakout on booming physical demand as silver attacks the $25 level, plus a look at more inflation surprises.

Gold
September 3 (King World News) – Graddhy out of Sweden:  As said for 3 weeks, this precious metals major low is looking very good, and today Gold breaks away from red MA200. The break upwards after having backtested 200 day moving average was expected at my service. Now we need a break above July/Aug 1838-ish highs for final confirmation (see chart below). 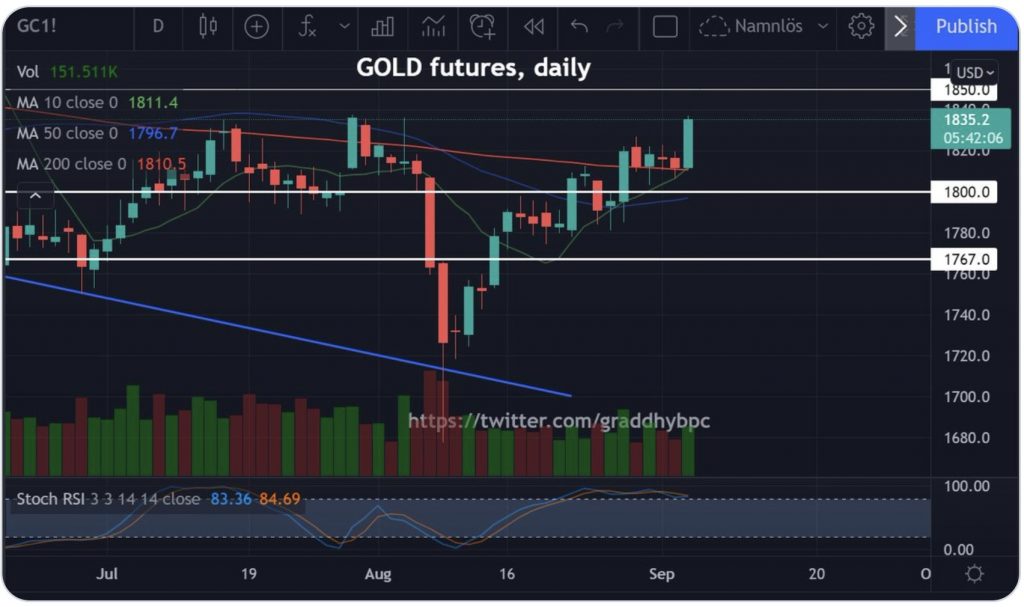 Change Your Mindset
Graddhy out of Sweden:  After a long, rough decline in a sector it is important to not be stuck emotionally in a mental state that makes one miss the turn. It is important to be able to shift view and not be burdened by previous months of decline…

Underweight Hedge Funds Will Be Forced To Buy Gold
Fred Hickey:  Gold spiked up this AM on bullish jobs report and stopped just short of $1830 (key technical level, …backed off a bit during the witching hour and has now smashed thru $1830. Per my latest letter, should force underweight hedge funds to buy.

1970s Redux
Fred Hickey:  Stagflation – this picture says it all. Yet if one listens to the Wall St. bubbleheads, they still believe they’re in “Goldilocks” land (see chart below). 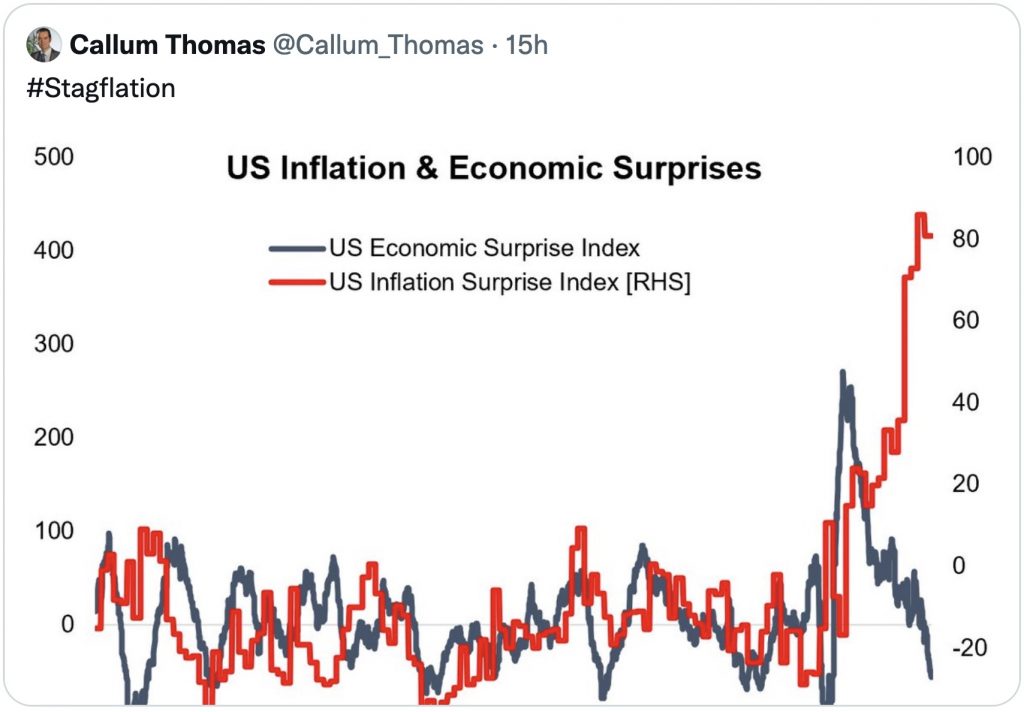 Booming Gold Demand
Garic Moran:  Gold is trading above all moving averages after a very disappointing employment report. The CTAs who were selling Gold futures below the moving averages must reverse positions unless some entity decides to take on very strong global physical demand.

We now find out Indian consumers bought 118 tons of Gold in August; which is 50% of monthly global mine supply. Emerging market central bank demand and Chinese consumer demand will more than likely put the total of physical Gold demand over monthly mine supply.

Weak Economy
Peter Boockvar:  Payrolls in August grew by just 235k, well below the estimate of 733k, partially offset by an upward revision to the two prior months of 134k. In fact, July specifically was revised to over 1mm. The private sector added 243k vs 798k in July (revised up by 95k). The household survey was solid, with an increase of 509k after a 1.04mm print in July. Combine this with the labor force increase of 190k and the unemployment rate fell to 5.2% from 5.4%. For perspective, the 30 year average is 5.9%. The all in U6 rate is down to 8.8%, lower by 4 tenths from July and that matches the March 2020 rate. The 30 yr average for this metric is 10.4%.

Viewing today’s payroll number as binary is incorrect I believe and too simplistic. Lower number, good for markets because the Fed won’t taper or strong and a September announcement it is? That easy? Well, if we see that latter then yes it’s taper time but what if it is the former for the reason that it’s due to a shortage of workers and higher wages and that means taper time too?

Worker Shortage Getting Worse And Worse
I say this because according to the August NFIB small business survey hiring saw the worker shortage is getting worse just as the demand for labor has NEVER been greater in the history of this survey dating back to 1974. Plans to Hire rose 5 pts to 32%. The 48 year historical average is 11%. 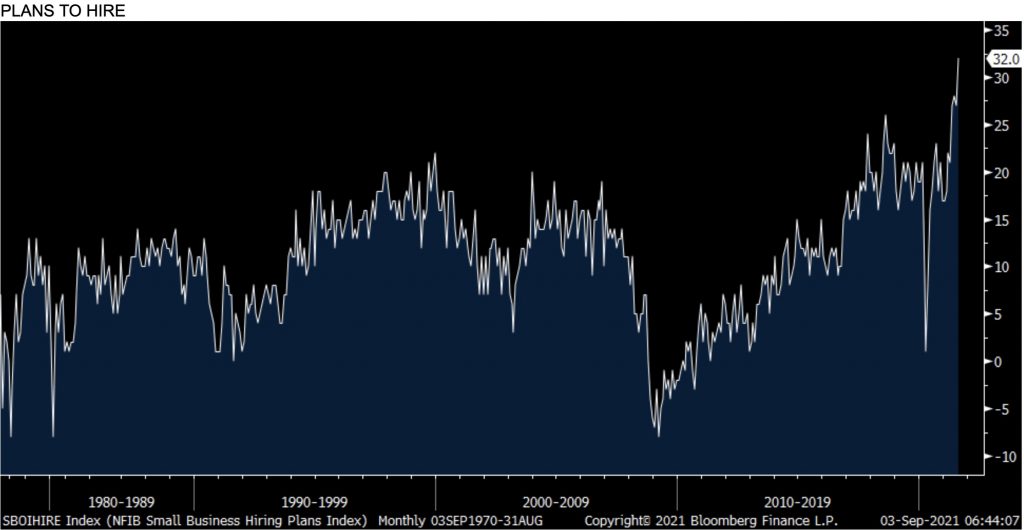 Another Day, Another Record
But, all the workers aren’t there for hiring as “50% of all small business owners reported job opening they could not fill in the current period, a record high reading.” The 48 year average is 22%. 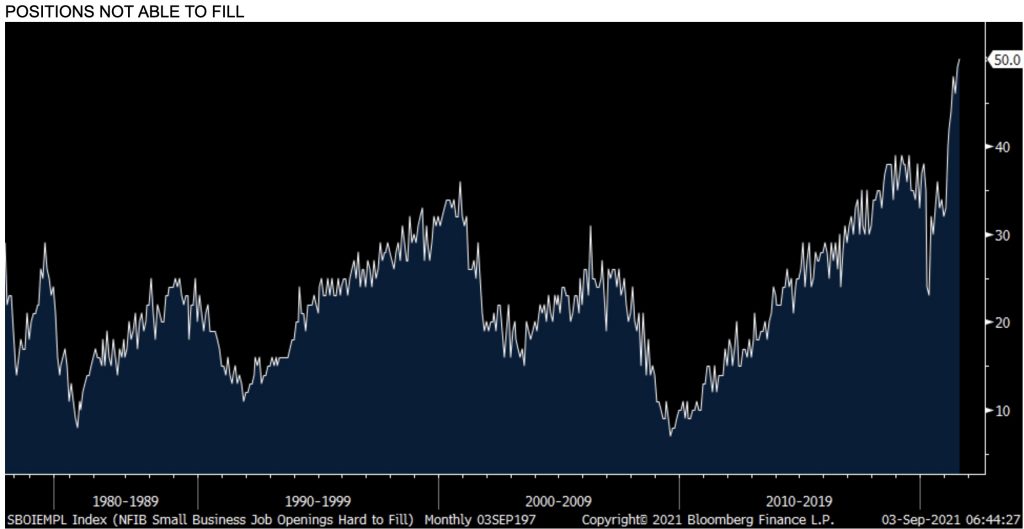 More Transitory Inflation
In turn, employers are paying up. Current Compensation rose to 41%, up 3 pts from July and that is also a 48 year high. 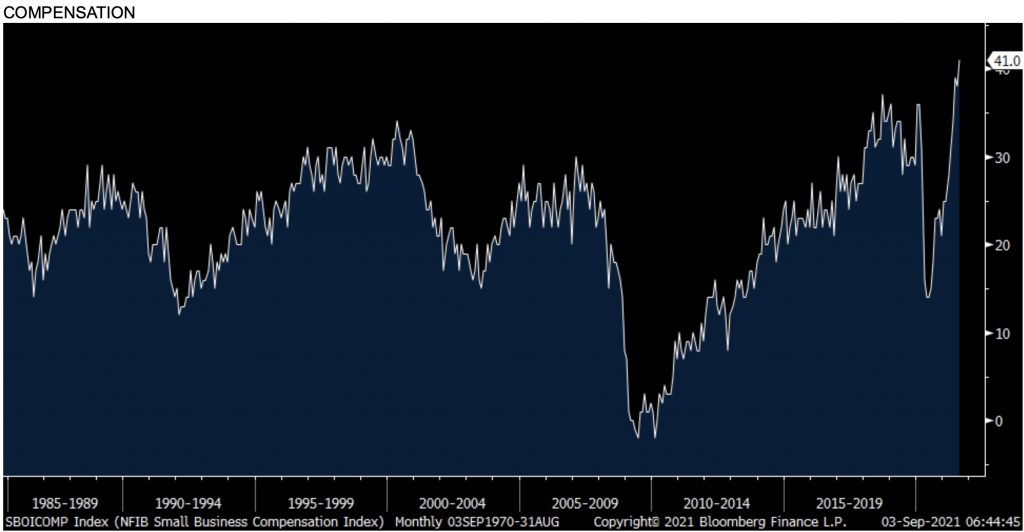 The NFIB said “Small employers are struggling to fill open positions and find qualified workers resulting in record high levels of owners raising compensation. Owners are raising compensation in an attempt to attract workers and these costs are being passed on to consumers through price hikes for goods and services, creating inflation pressures.” The underline is mine and this doesn’t sound so temporary.

WTF? Tech Bubble 2.0 Quantified
Quantifying how big in market cap Apple, Facebook, Google and Amazon have gotten, I read in yesterday’s FT that the combined market cap of the four is “worth more than the entire Japanese TOPIX index, or all 2,190 companies on the main board of the Tokyo Stock Exchange.” Also, Apple and Facebook together are worth than the FTSE. And, Amazon is bigger than the entire German DAX index. Pretty amazing.