February 26 (King World News) – Alasdair Macleod out of London:  After a strong performance on Monday, gold and silver prices traded lower as the March contracts on Comex expired. By this afternoon gold had lost a net $58 from last Friday’s close at $1724, and silver was down $1 at $26.25.

The Good News
Gold’s open interest is now down to 478,835 contracts, less than 10,000 contracts above last year’s low. This is shown in the next chart. 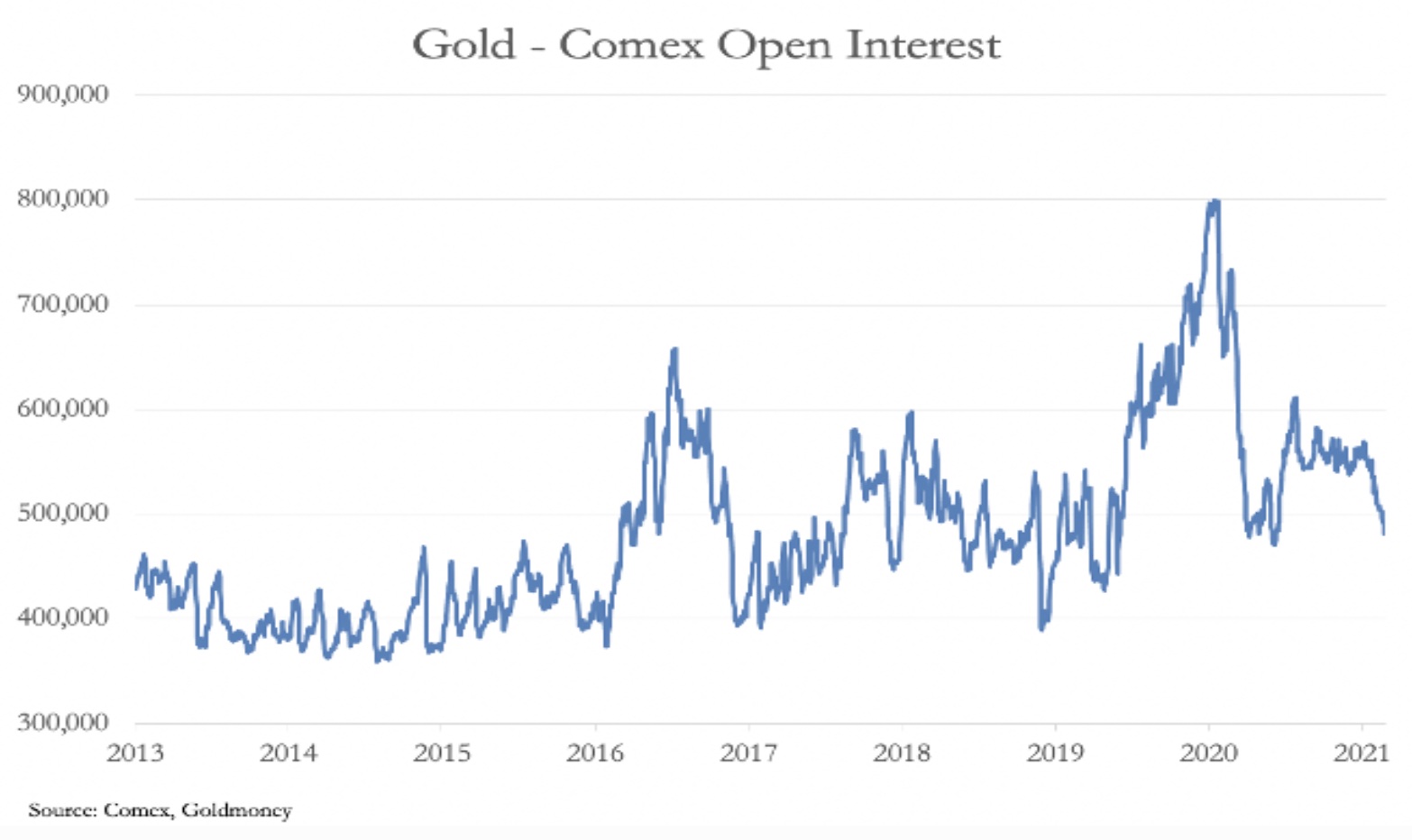 The story is about bullion banks’ trading desks recovering their short positions, benefiting from the hedge funds being spooked by rising USD bond yields, illustrated by our next chart. 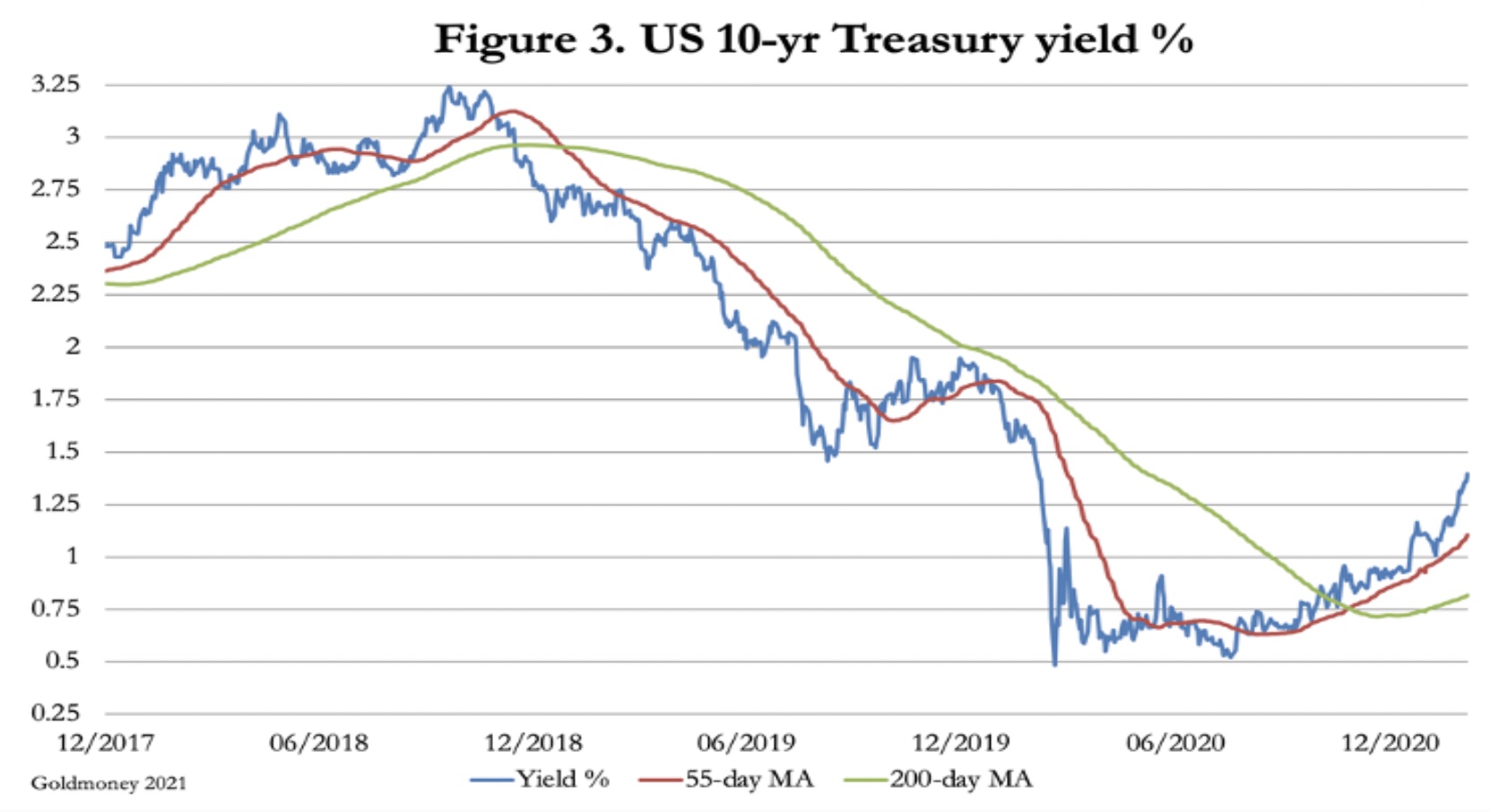 The dramatic rise in US bond yields has caught markets by surprise. For short-term traders such as hedge funds, higher bond yields encourage them in their pairs trade to buy dollar/sell gold. The sharp rise in bond yields this month plays into the bullion banks’ hands, enabling them to close short positions and drive the futures’ prices even lower.

The extent of the damage to the hedge funds’ net position will be partially revealed tonight in the commitment of traders’ report as of last Tuesday, with the full extent only known next Friday.

Silver has been the story this week, with ongoing physical shortages around the world. Net flows of deliverable silver on Comex have diminished by 13.5 million ounces this month, leaving registered for delivery stocks for 27,000 contracts, so outstanding March contracts which today stand at 10,945 are amply covered. The threat of a RobinHood/Reddit inspired default has been overcome for now.

With rising bond yields and the silver squeeze subsiding the bullion banks appear to be back in control of prices. But for some time, Comex has been shifting from a tustle between bullion banks and the hedge funds due to the growing presence of the Other Reportables category. This includes central banks, sovereign wealth funds and family offices, who are more intent on wealth preservation and at the margin are now using Comex to secure delivery. The changing structure of Comex in this respect is shown in how the Other Reportables have consistently added to their net longs over time. 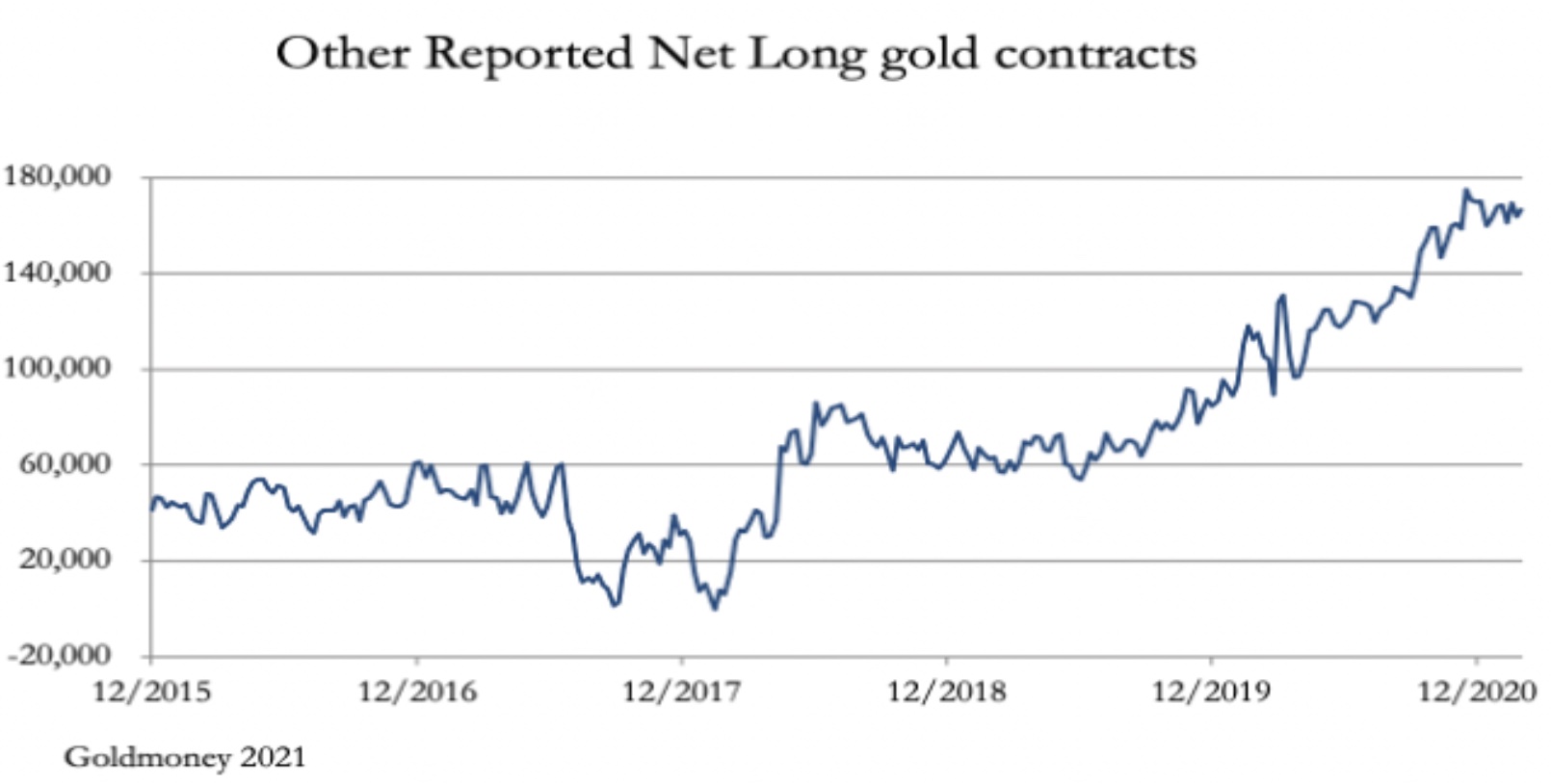 This category compares with the last known position of the hedge funds, which were net long only 67,956 contracts as of 16 February, and today could be as low as 30,000. Instead of day-to-day trading profits, Other Reportable are motivated more by inflation fundamentals.

The only major Western currencies without negative yields are the US dollar and UK’s sterling. The mood music in the City is that negative rates are on their way. With Ms Yellen in charge at the US Treasury, pressure for the US to follow is mounting. But since the dollar is the global pricing medium, the Fed appears to be reluctant to break the zero bound. The solution is for the US Treasury to flood markets with its accumulated balance on the general account with the Fed into a banking system which may have to discourage deposits by charging depositors.

In this audio interview Pierre Lassonde shares with KWN listeners around the world his top mining stock pick for 2021 that he has been aggressively buying as well as discussing where the price of gold is headed and why he is so bullish and you can listen to the interview now by CLICKING HERE OR ON THE IMAGE BELOW.

Also released! This Will Send The Price Of Gold Substantially Higher CLICK HERE TO READ.

Also released! “Game Over” And We Are Seeing Shocking Levels Of Inflation CLICK HERE TO READ.