Here is a look at gold, silver and the coming Fed pivot.

Gold, Silver And A Fed Pivot
November 18 (King World News) – Alasdair Macleod:  Over the last two weeks gold and silver have continued to enjoy a significant rally, but this week has been one of consolidation. In European trade this morning, gold was at $1765, down $14 from last Friday’s close. The correction has been more marked in silver, which this morning was at $21.20, down 48 cents since Friday, though on Tuesday morning it hit a high of a dollar above current levels. 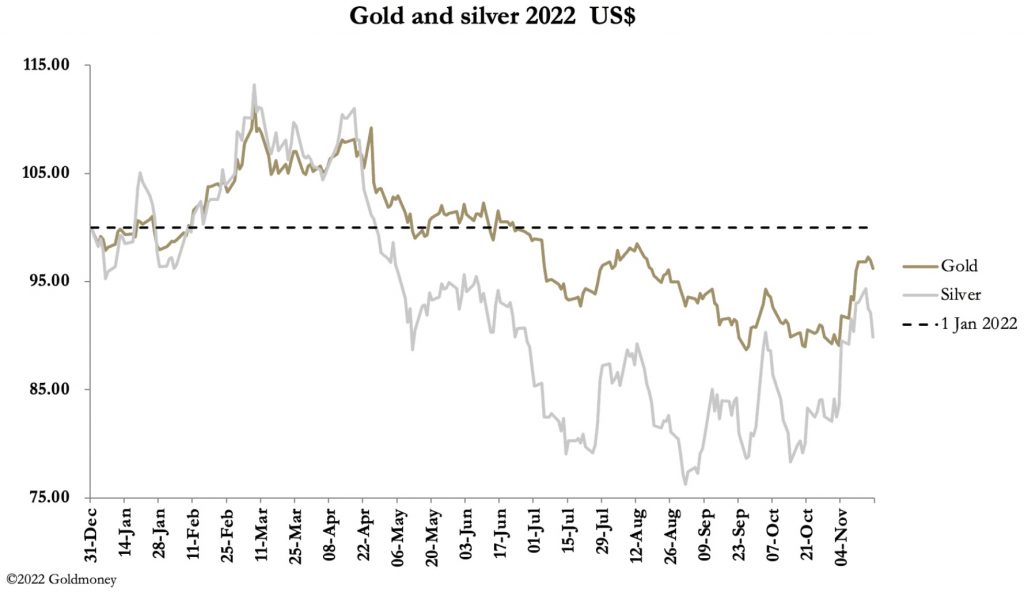 Silver volumes on Comex were healthy rather than spectacular, and in gold apart from a spike on Tuesday fell back significantly on Wednesday and Thursday when Open Interest fell back as well. These are bear squeeze conditions rather than bullish sentiment. 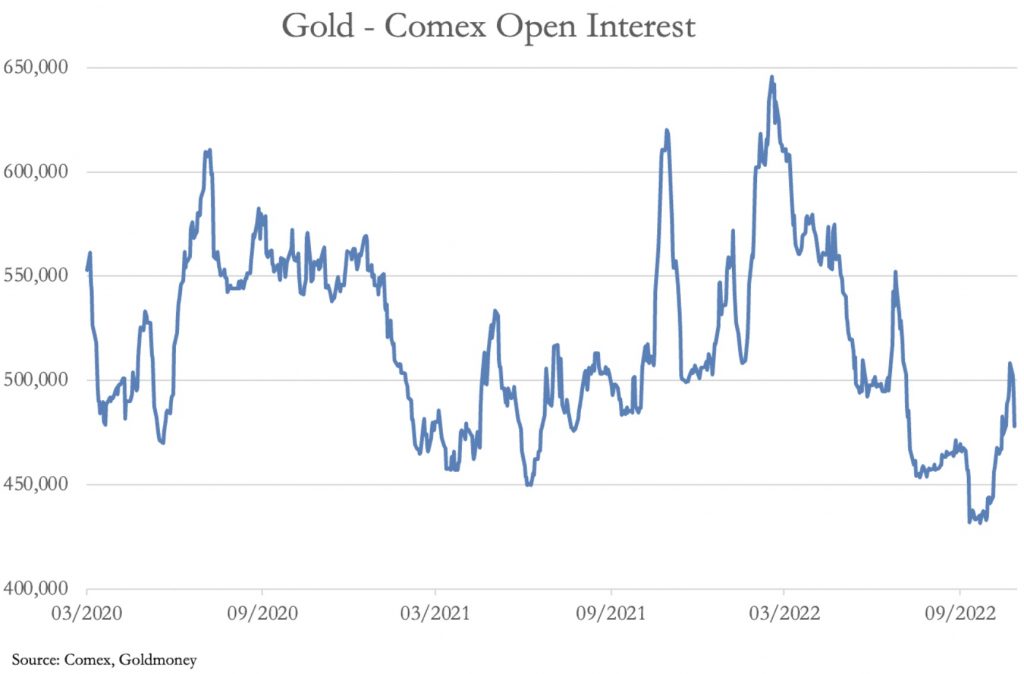 No doubt, the dollar bulls were being badly squeezed as the trade weighted suffered a mini collapse. This is next. 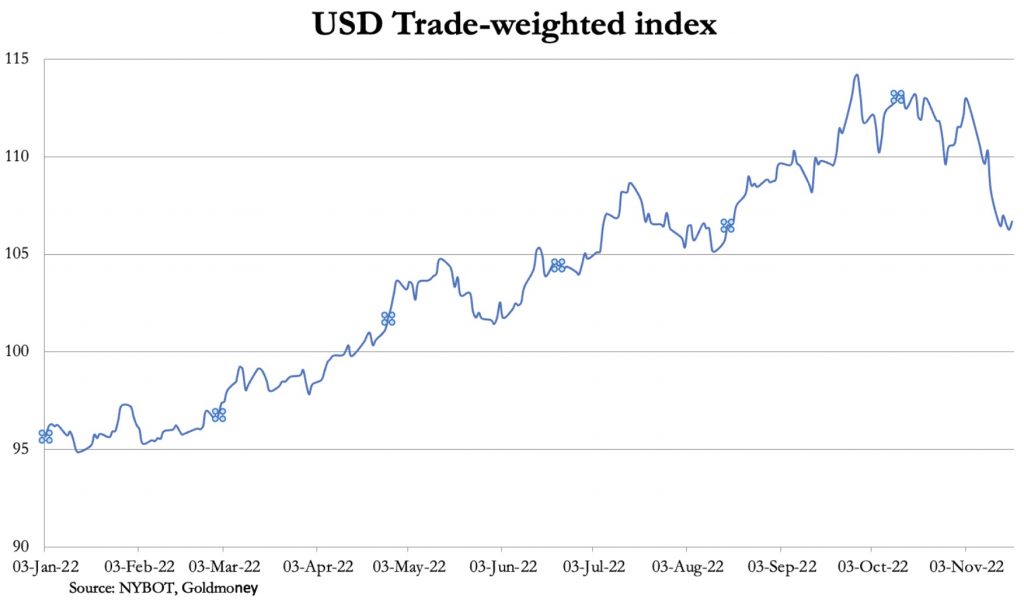 This move has wrong-footed the hedge funds short of gold and long of the dollar. For the bullion banks, themselves short, this was an opportunity to squeeze the hedge funds before taking gold futures down again. We should not forget the consensus among them at the LBMA’s jamboree in Lisbon recently, which was broadly neutral for gold. This suggests that bullion banks are still relaxed about trading futures on the bear tack.

Currently driving the gold/dollar relationship has been an increasing realisation that in taking a hawkish line on interest rates, the Fed is out on a limb compared with the other major central banks. It is the Fed’s determination to raise interest rates while others are soft peddling which is exacerbating price inflation conditions elsewhere in other currencies, as the yen, euro, pound, and even the Chinese yuan weakened…

Combined with growing evidence of a global recession, this is why markets suspect a pivot is on its way. While there is little sign yet that this is the case, it is a reasonable supposition. Furthermore, the Fed funds rate is already well above the level which crashed markets from the repo crisis in September 2019 until the following March. And the level of debt in the US economy is significantly higher today. This is up next.

With fears of higher interest rates receding, bonds have also rallied, which has helped to keep a rally in equities intact. The next chart is of the 10-year US Treasury note. 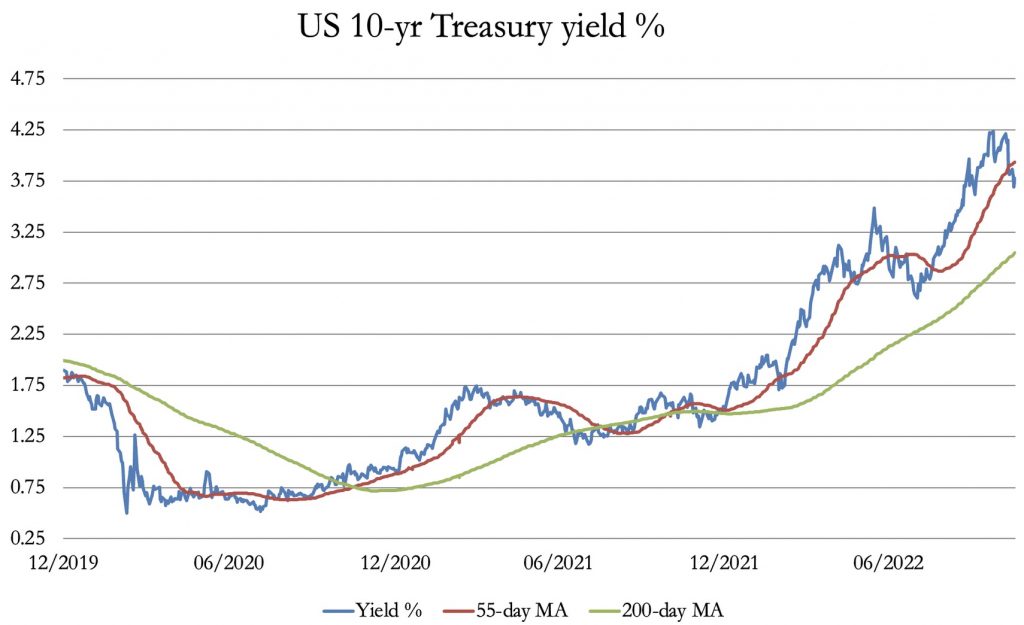 Technically, it appears that this yield could decline further towards the 200-day moving average, which would be consistent with a further fall in the dollar’s trade-weighted index. That being so, the potential for a continuing bear squeeze pushing up gold and silver prices seems reasonable.

There must come a point where the potential for a deepening recession becomes alarming enough for the Fed to actually pivot, prioritising protecting the economy, government finances, and markets over the currency. Then the Fed’s problem will be to keep foreign holders of US Treasuries on side, given that they are disproportionately invested in them and some of them have taken the opportunity of a strong dollar to sell.