One of the greats in the business says gold is laughing at Powell.

Gold is Laughing at Powell
April 29 (King World News) – Matthew Piepenburg at Matterhorn Asset Management (based in Switzerland):  Recently, my colleague, Egon von Greyerz, and I had some unabashed yet blunt fun calling out the staggering levels of open hypocrisy and policy desperation unleashed by former Fed Chairman, Alan Greenspan.

Poor Alan was an easy target of what I described as the “patient zero” of the reckless interest rate suppression and unbridled monetary expansion policies of the Fed which have always led to equally reckless boom and bust cycles in markets and economies.

But let us be fair to comical Fed Chairmen like Greenspan, as he is not alone in making a mockery of his post at the Eccles Building.

With the exception of Paul Volcker and William Martin, the sad truth is that nearly every person sitting in that Chair of a private bank masquerading as a “Federal” reserve has made the bank, and themselves, a public embarrassment…

As the legendary private investor Jim Rogers recently observed, almost all central bankers effectively lie and obfuscate facts as part of their job description (and job preservation) at the Fed.

A Central Banker’s Job Description
For the most part, over-hyped Fed Chairs know how to run up debt levels and create lots of money to appear “accommodative” to markets in the short term and then blame “animal spirits” on the disasters which always follow longer term.

In fact, if I had to come up with the most honest and historically-confirmed job description for a Fed Chairman, I would post the following job-post on LinkedIn:

“Seeking D.C.-based expert fluent in double-speak, comfortable with unsustainable debt expansion and handy with a money printer. Ivy League credentials a plus.”

The Latest Nonsense from Powell
As for double-speak, Mr. Powell is now seeking to outshine ol’ Mr. Greenspan’s art of spin with stunning elan.

At a recent economics club in Washington, Powell was both shameless and brilliant in his ability to spew fantasy with the skill of a circus promotor yet maintain the straight face of a circuit judge.

Specifically, Powell tried to downplay the U.S. debt elephant in the room by admitting to its horrific size yet promising a miracle policy shift sometime down the road…

That is, he was unable to deny what he described as the “unsustainable path” of current U.S. debt levels growing “meaningfully faster than economic growth,” but was quick to comfort anyone gullible enough to believe him that for now “there is no question of our ability to service our debt for the foreseeable future.”

Ahhhh. Such calming words, such confidence, such market-placating guidance.

A Brief Translation of Fed-Speak
But now, let’s translate Powell’s Fed-speak into real-speak and get a deeper look into the mind of a first-rate spin-seller.

When Powell says “there is no question of our ability to service our debt for the foreseeable future,” he is actually telling a kind of partial truth.

Yes, so long as the Fed decides to print trillions more fiat dollars and artificially cap yields and interest rates, the Fed can indeed “service” it’s nearly $30T in public debt for the “foreseeable future,” as the cost of that debt is forced to the basement of history.

But what Powell forgets to say, quite cleverly, is that the “foreseeable future” of which he is telegraphing is nothing more than a future of equally foreseeable and grotesquely expanded, and hence, debased U.S. dollars, which is needed to monetize that truly unsustainable debt.

Needless to say, such money printing is great news for gold…

But Powell’s ability to spin fantasy gets even more pronounced with his next great lie masquerading as policy comfort.

Specifically, and to wit, Powell then says, in the same breath, that “at some point in the distant future, when the economy is in better shape,” the Fed will then be in a better position “to deal with the debt issue then.”

Ahhhh. That’s just wonderful, no? At some point in the “distant future” the Fed will magically “deal” with our debt issue.

Did Powell Take a Math Course? Read a History Book?
But here’s the problem with Powell’s kindergarten logic and truth-challenged phraseology: That “distant future” of “economic growth” is mathematically and historically impossible.

Because once a nation crosses the debt Rubicon of 100% debt to GDP, and once a nation’s currency has lost greater than 98% of its inherent value due to fiat money expansion (as is the case today), economic growth has never, not once in the entire history of the financial world, ever occurred.

Stated more simply, that “distant future” of “economic growth” in which the Fed “deals” with our debt problem is an open lie, no different than Bernanke’s 2009 promise that QE1 was “temporary” and would end by 2010.

If Powell would like, I am happy to send him (or Monsieurs Greenspan and Bernanke) a few high-school text books on basic math, or maybe one or two essays on market history to help him (them) regain both a conscience and facts.

Jerome, my weblink is found below.

My former Harvard President and one-time Treasury Secretary, Larry Summers, for example, is no less of a master at promoting his image while ignoring his mistakes.

Under his watch in 1998, that derivatives market went from $95T to $670T despite open warnings from Brooksley Borne at the CFTC. Meanwhile, Summers was openly insulting her while slapping backs with bankers and promising the world not to worry about their master plan to expand this once-safe futures exchange.

But less than a decade after telling Congress that he and his banker friends were more than capable of managing OTC derivatives risk, that same market, as well as the S&P (and the Harvard endowment) tanked by greater than 50% in a matter of weeks in 2008…

Today, the same Mr. Summers who helped crash the markets in 2008 is suddenly working on re-branding himself, warning the world, correctly, about the inflation to come.

In fact, he specifically observed that the U.S. has “embarked on one of the least responsible macro-economic policies that the US has had in the last 40 years.”

Turning to Gold
Well, one thing which folks like Powell and even Summers can agree is that there will be lots more money printing and debt expansion to come. Even they agree on that.

For those of us who can see through Fed-speak and track facts rather than fictions, there are two factors favorable to gold (rather than just golden tongues) which we can smile upon for the next “foreseeable” 5 years, namely: More growth in the broad money supply and more negative real interest rates.

As for the money supply, we’ve written about its promiscuous expansion at length elsewhere, but in case you’re curious what it looks like, just see for yourselves:

And as for negative real (i.e., inflation-adjusted) rates, we’ve also written at length about how well gold shines when inflation rates outpace yields on US Treasury bonds.

As Powell has already told us, repressed bond yields and repressed rates are inevitable in the coming years for no other reason that the Fed can’t afford for those rates to go much higher. Period. Full stop.

And as for inflation outpacing those repressed rates, that too is no longer theoretical or debatable, as inflation is measured by the expansion of the money supply rather than the fictional math of the CPI scale, which despite even its openly bogus reporting, cannot hide the inflationary signals coming from commodity prices, rising M1 and M2 data and increased governmental control of the banking system.

In short, the “foreseeable future” is clearly one that favors inflation outpacing yields and thus smiling upon gold.

Getting Technical
Aside from such historically and fundamentally-confirmed tailwinds for this misunderstood precious metal, even the technical indicators are making gold smile.

Looking at last week’s daily price action in gold, we can see that after last August’s $2070 gold high, the subsequent (and expected) gold correction has both found and bounced off its technical support/bottom.

As the chart below confirms, gold reversed off a double-bottom line (far right) of historical support twice in March:

In addition to a critical double bounce off support, the daily gold price broke through, and then closed consecutively above, a technical resistance band in April.

Having broken resistance, gold pricing then created a new trendline up and to the right: 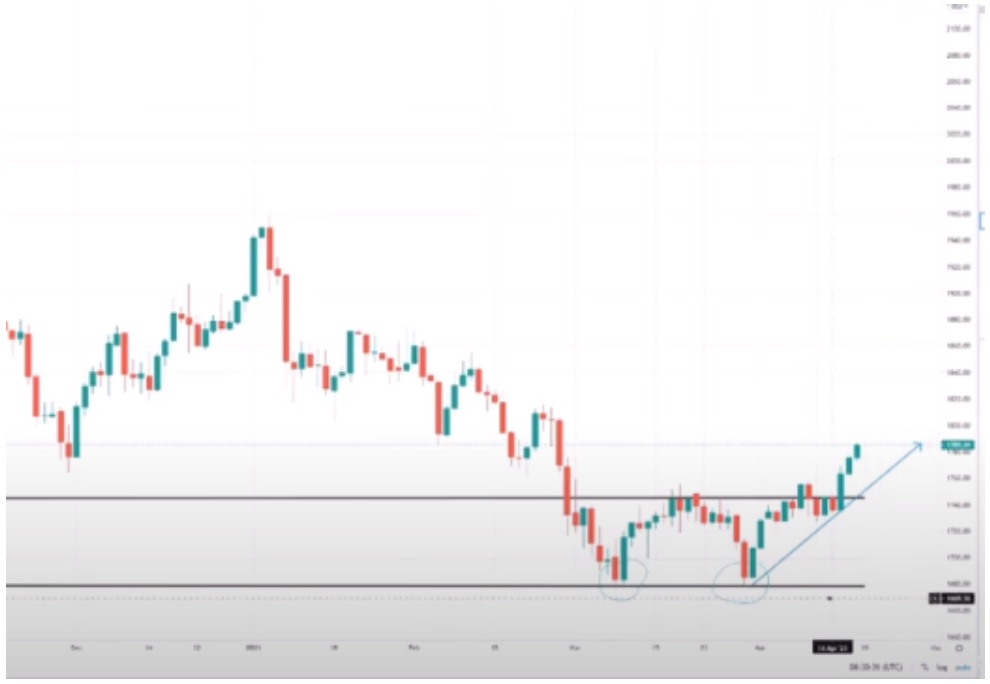 Such a bounce off a double bottom pattern plus consecutive price close confirmations above resistance is a classic chart confirmation of an upward technical direction in gold which may be of interest to those who trade this oh-so precious metal.

For us, a triple bottom support would have been better, and price swings, near-term, for gold are not outlawed.

Of course, we remain largely agnostic to the short-term price action of gold, as we see it as an investment rather than a speculation…

Far more importantly, we see gold as the ultimate answer to the emotional fact that fiat currencies are losing their punch by the second. Gold will rise much higher simply because the dollar’s purchasing power will sink far lower.

Thus, despite the fictional “distant future” and “economic growth” of which Powell spoke above, we see an all too real distant future of increasing debt, increasing money supply and hence increasingly open and obvious currency debasement.

Given the facts above, we hope our words make more sense than Powell’s…This will link you directly to more fantastic articles from Egon von Greyerz and Matt Piepenburg CLICK HERE.

***To hear Gerald Celente discuss what shocks to expect in 2021 CLICK HERE OR ON THE IMAGE BELOW.

***To hear Alasdair Macleod discuss why gold and silver prices are set to soar in 2021 CLICK HERE OR ON THE IMAGE BELOW.