The man who warned central banks were already panicking before the global collapse just issued this dire warning.

A World In Complete And Utter Collapse
May 1 (King World News) – Jeff Snider at Alhambra Partners:  Following along the same top-down model, what unites central bankers and socialists is equality. Handing over significant authority to either results in everyone being equally impoverished. And, therefore, those very authorities fighting over minute scraps so as to display some sense of accomplishment.

In October 2015, safely nested within the cozy confines of Brookings, being paid handsomely to opine on matters he’d shown no talent for, former Federal Reserve Chairman Ben Bernanke was given banner space at a premium media outlet to defend his honor. To the pages of the Wall Street Journal, the worried man claimed:

Europe’s failure to employ monetary and fiscal policy aggressively after the financial crisis is a big reason that eurozone output is today about 0.8% below its precrisis peak. In contrast, the output of the U.S. economy is 8.9% above the earlier peak—an enormous difference in performance.

“At least we’re not Europe” wasn’t the defense Bernanke quite had intended. We suck but don’t suck as bad is no measure of success.

What was already clear by then, to those who don’t listen to these clowns, was how both Europe and the United States, as well as the rest of the entire global economy (especially after Euro$ #3, which was then unfolding), were trapped within the same “L.” The modest difference was in degree, not type; Europe’s “L” a little more flat in its later years. 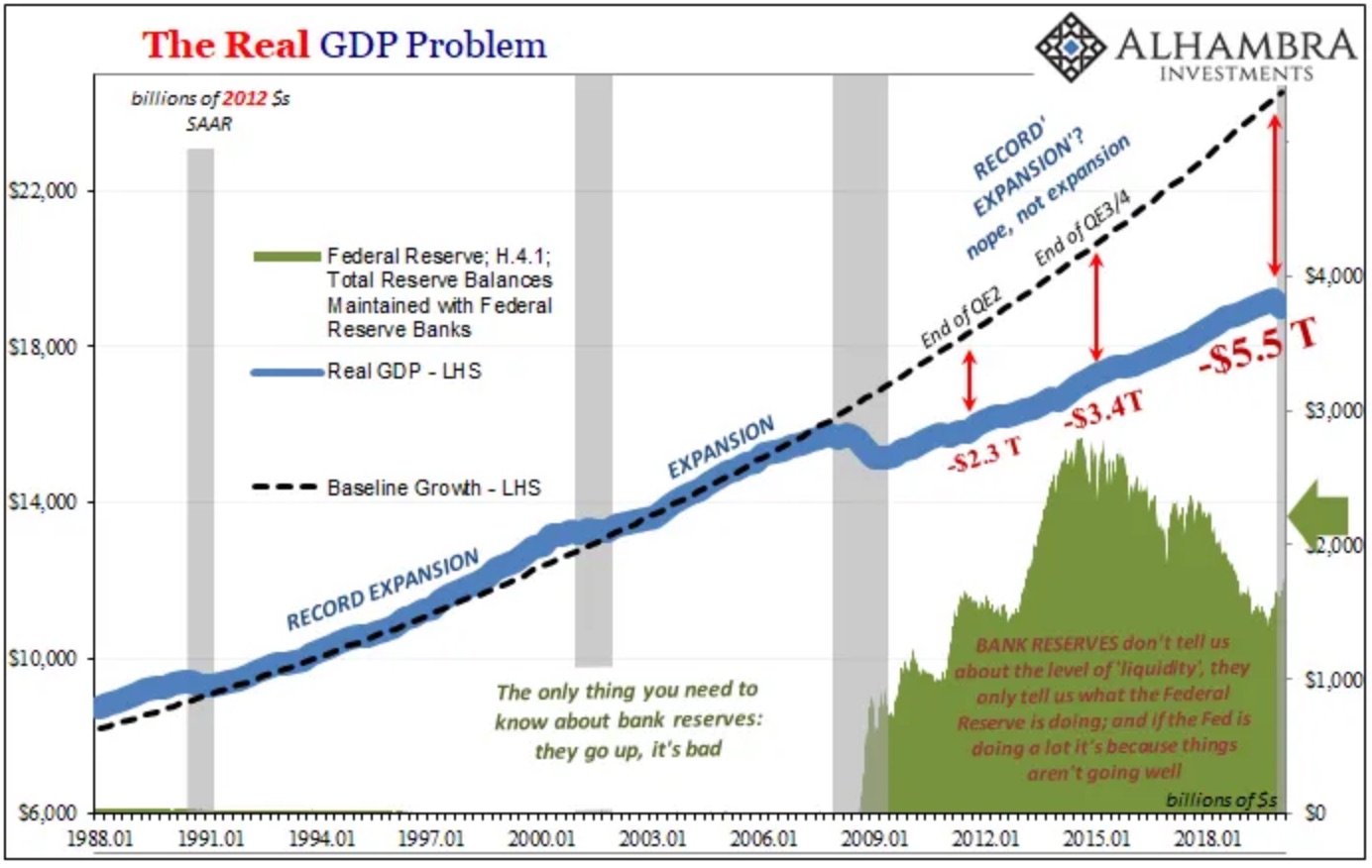 Today, we’re supposed to believe some of the same people are going to ride the world’s rescue. And where there aren’t the same people there are people who do and believe all the same things. Starting with how the 2009-19 “L” somehow equated to recovery.

Meaning, that’s what you should expect as a baseline going forward given the situation we find ourselves in at the moment. When all is said and done over the years ahead, we might best expect another “L” to unfold while, so long as we let them, officials crow about how that “L” was really another recovery instead of a second leg down in a multi-decade depression.

Patting themselves on the back is pretty much all these people are good for, that and getting the compliant financial media to go along with the lie.

The post-GFC1 “L” is our model because, as the data is beginning to show, in the first stages of this latest disaster it isn’t the economic shutdowns which are causing the most damage. As noted of a desperately bad -4.9% real GDP quarter in America, estimates released by the BEA yesterday, the real non-economic interference didn’t begin until the very end of March.

What was engulfing the world from mid-February onward was GFC2. In those US statistics what is now most apparent was the obvious and shocking level of fragility across the economic system.

As we’ve already seen in the labor statistics, the labor force participation as much as jobless claims, at the first sign of danger the whole damn system folded like a cheap suit. It didn’t stand up as long as it could, as was expected, it just buckled – money to finance to economy.

Fortunately for Jay Powell, like Bernanke, he’s got Europe upon which to hang his hat. America was supposed to be strong and it’s actually a disaster; but did you see how bad it is over there! 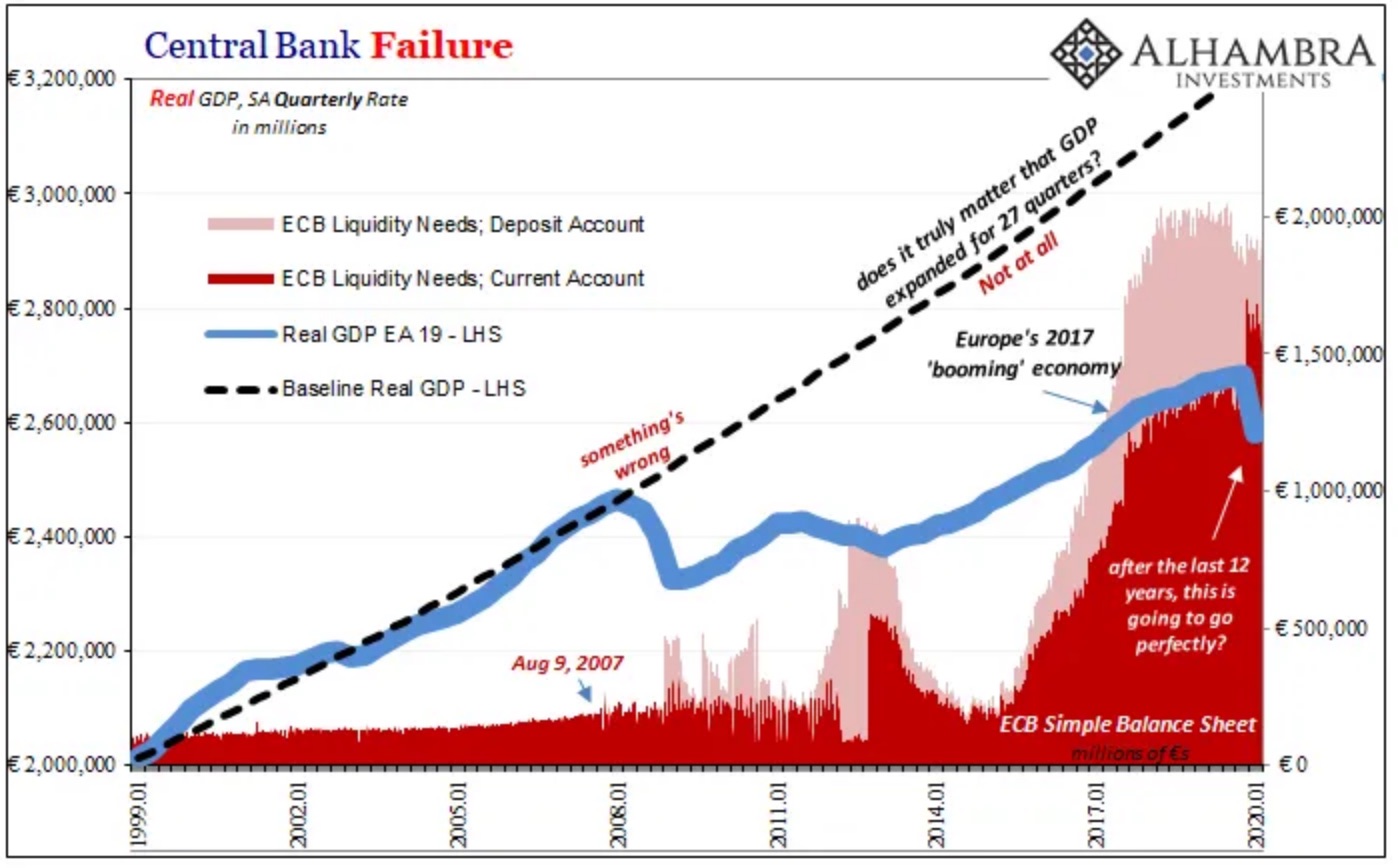 After The Last 12 Years, This Is Going To Go Perfectly? 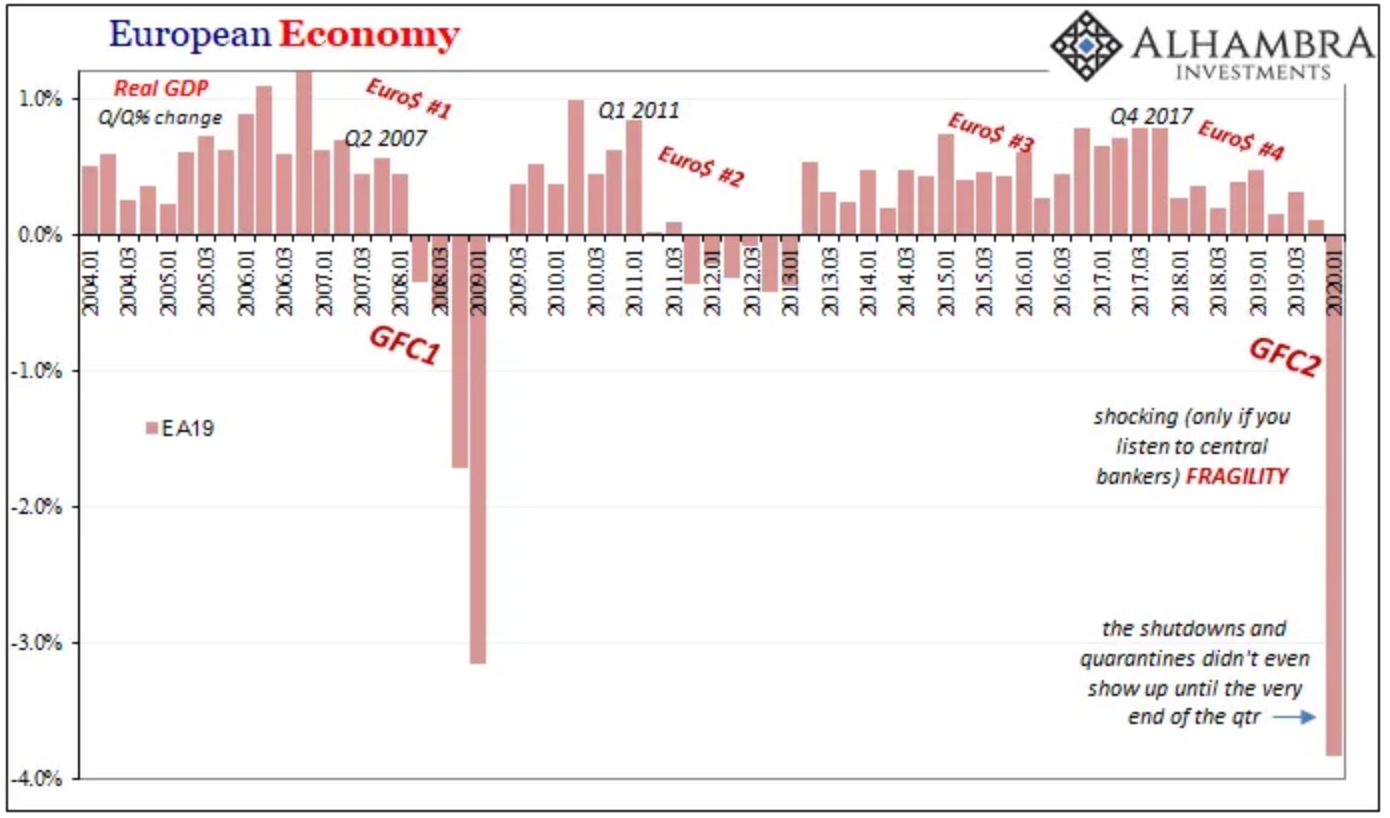 We all knew Q2 2020 was going to exhibit 1930’s levels of contraction. What’s been truly mind-blowing, for some, especially in the media, is that Q1 might already have been there.

Again, how could that be? If not the non-economic government mandates, where else do we account for how these systems just folded up like the thinnest sheets of paper?

Euro$ #4 is the only place to start. The European economy, especially its three largest constituents, Germany, France, and Italy, were all at the doorstep of recession by 2019’s end already. Hardly towering strength, there was a real case for technical recessions in France and Italy during Q1 without COVID-19.

And Germany, which had barely managed to avoid a negative number in Q4, probably would’ve produced a serious minus anyway.

Even the published numbers seem to be understating the severity for what happened when that weakened state met up with a second global financial crisis; for all of Europe, Eurostat figures real GDP declined by 3.826% quarter-over-quarter. That’s less than the US, you might initially think, until you realize these are not annualized estimates. On an annual basis, this is -14.4%.

Again, the only word that springs to mind is fragile.

The individual national estimates for Germany’s economy aren’t available from deStatis, but we do have them from Eurostat for France and Italy. They are beyond description.

French Economy Going Off The Rails 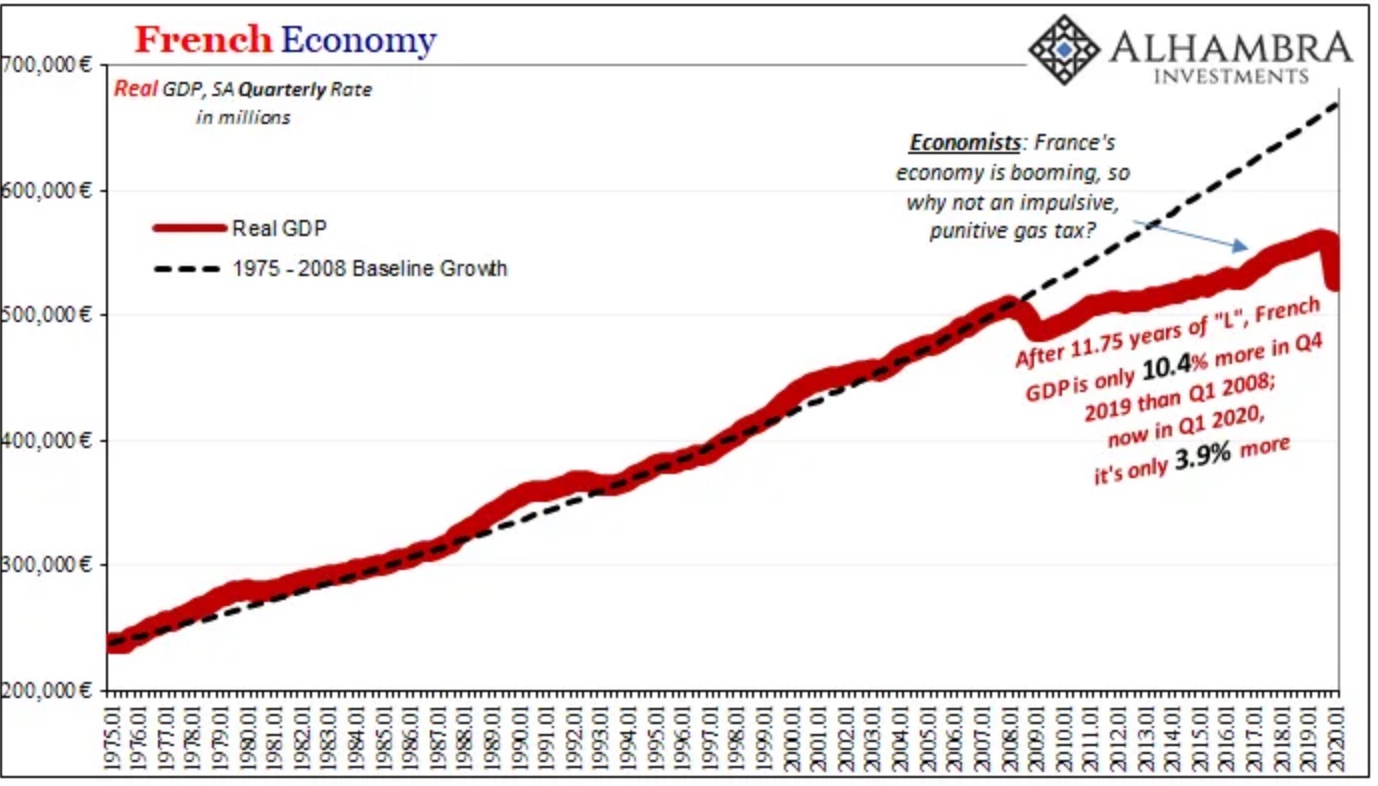 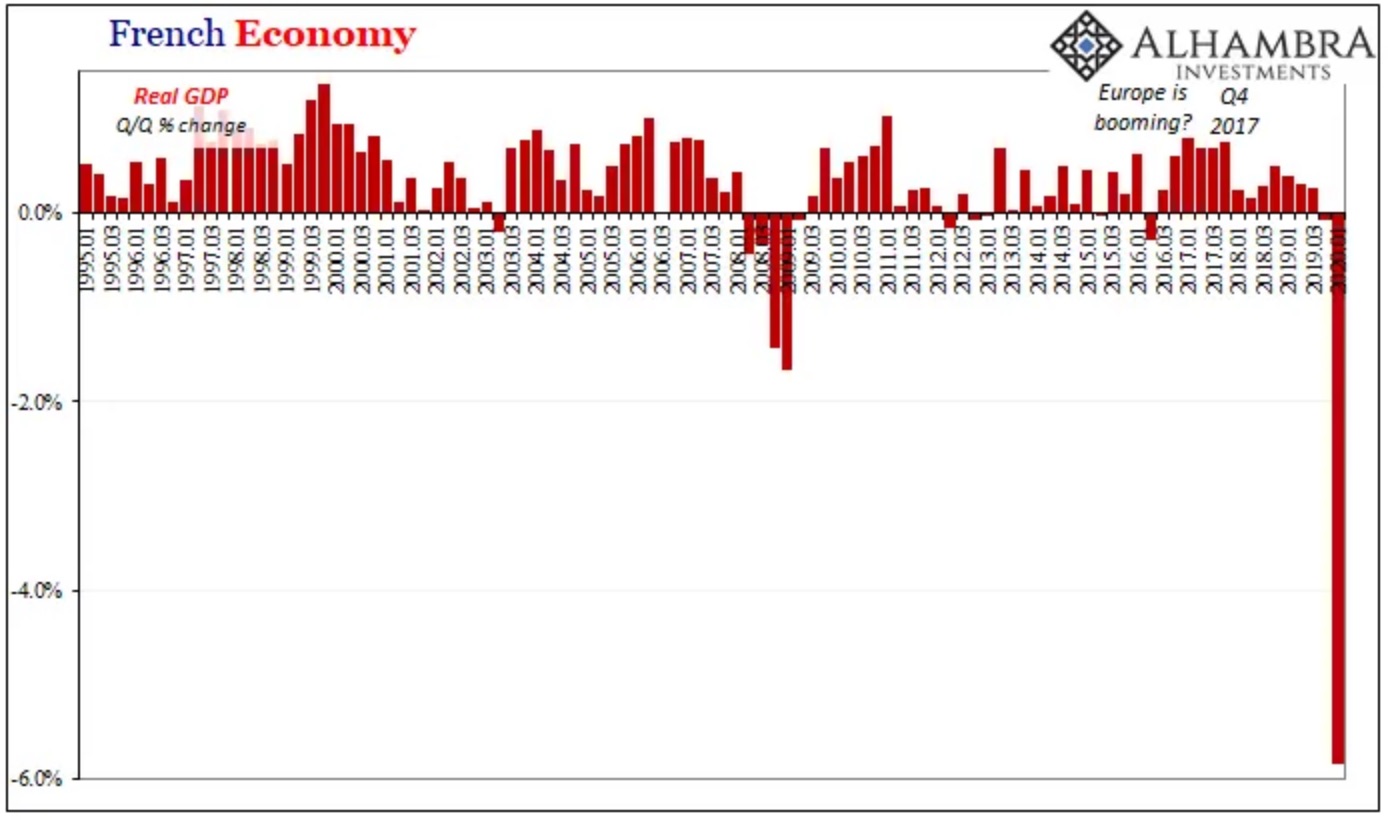 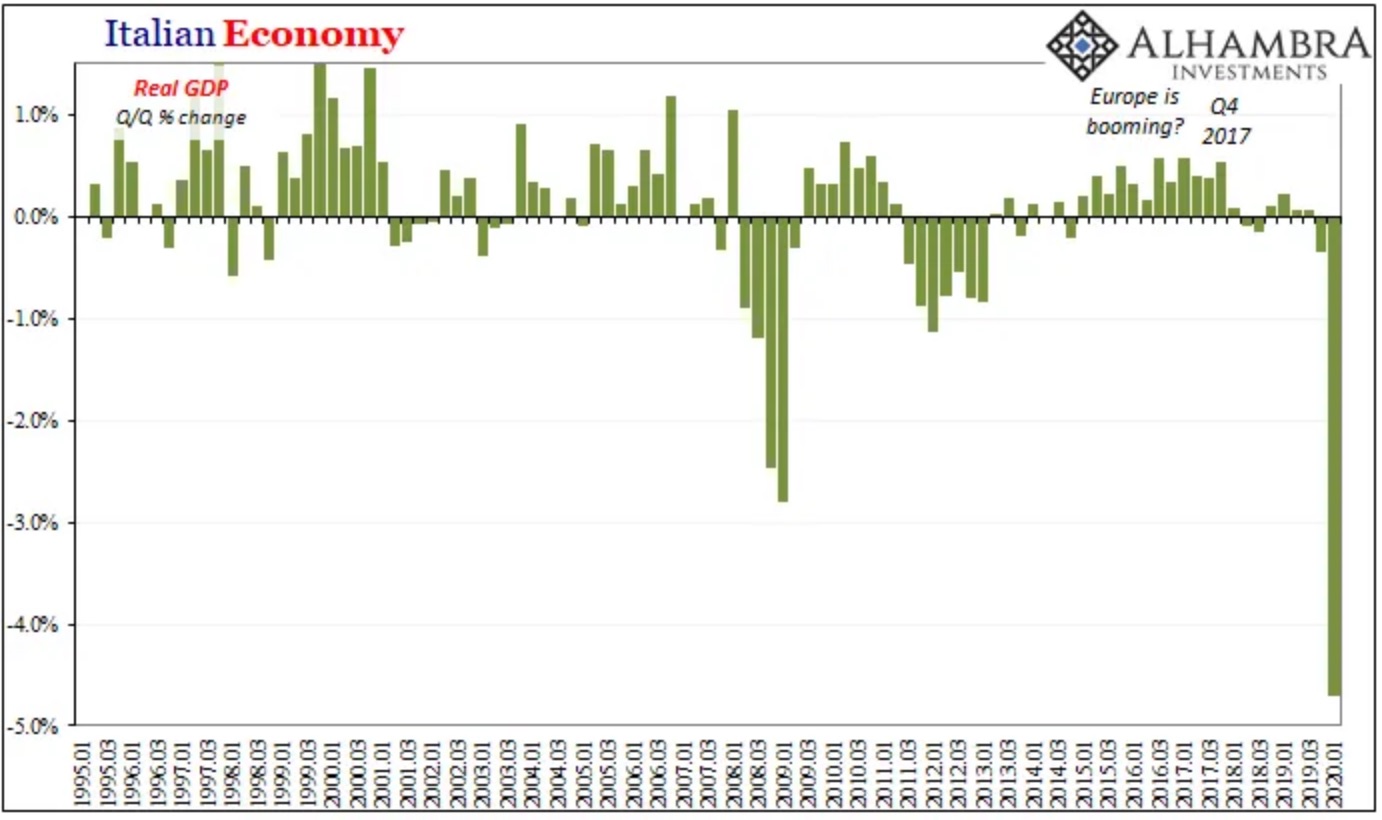 But We’re Supposed To Believe That Officials Will Suddenly Be Able To Make Sure It All Goes Perfectly From Here? On What Basis? Neither History Nor Common Sense. 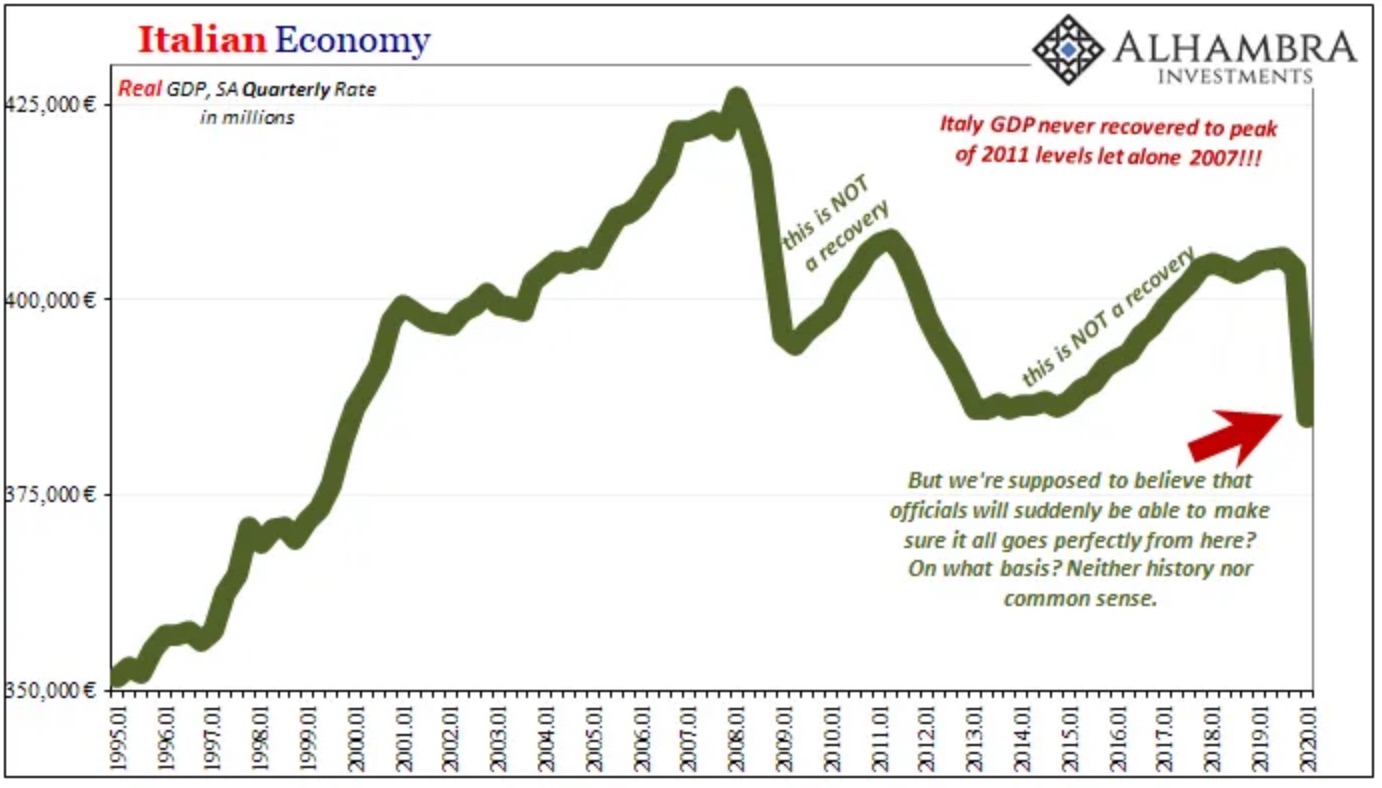 Looking at those charts above, how in the world are we supposed to believe that officials will get everything right from here on? On what basis are we to put all our faith in central banks and their “liquidity” to where everything goes perfectly so that we might be able to possibly have some chance of hopefully getting back close to even maybe in a year?

These first quarter numbers are, I think, far more important than those we’ll see for the second quarter. Why? As I write elsewhere for publication tomorrow:

No one is downplaying the severity of the situation, even the worst offenders deserve some limited credit here. Where they’ve offended is in overplaying both the starting position and then their ability to limit the downside and pick everything back up on the other side. In between is not really the issue.

We’re only getting data on the first part of it, and already it’s enough to make you sick. They bungled 2008, badly. They botched everything about the last two years. And now the first steps into the current crisis couldn’t have gone worse.

The US estimates are an unmitigated disaster, Jay Powell should be hanging his head in shame. Europe managed to outdo him (again, QE isn’t a solution, it’s a sign of how bad things must be; ECB QE restarted in Sept. ’19), a comparison which, you just know, is going to become a staple of official American discourse moving forward.

They should all be fired. Now. On the spot.

Having shown just how frail the system globally was at the start, during Q1, the chances of such a weakened condition magically righting itself just in time to get through the what will be the worst quarter since the Great Depression, Q2, a quarter that would feel right at home during the Great Contraction, is laughably, tragically nil.

GFC1, because of official incompetence at all levels, especially central banks, became a decade-long economic deficit that only grew through time – Europe as well as America. There was no “V” then.

GFC2 features all the same except with added pressure of COVID-19. That is the only difference. The rest is just the same equality being repeating.