Here is a look at the gold market, the global economy on crutches, plus this week’s positives and negatives. 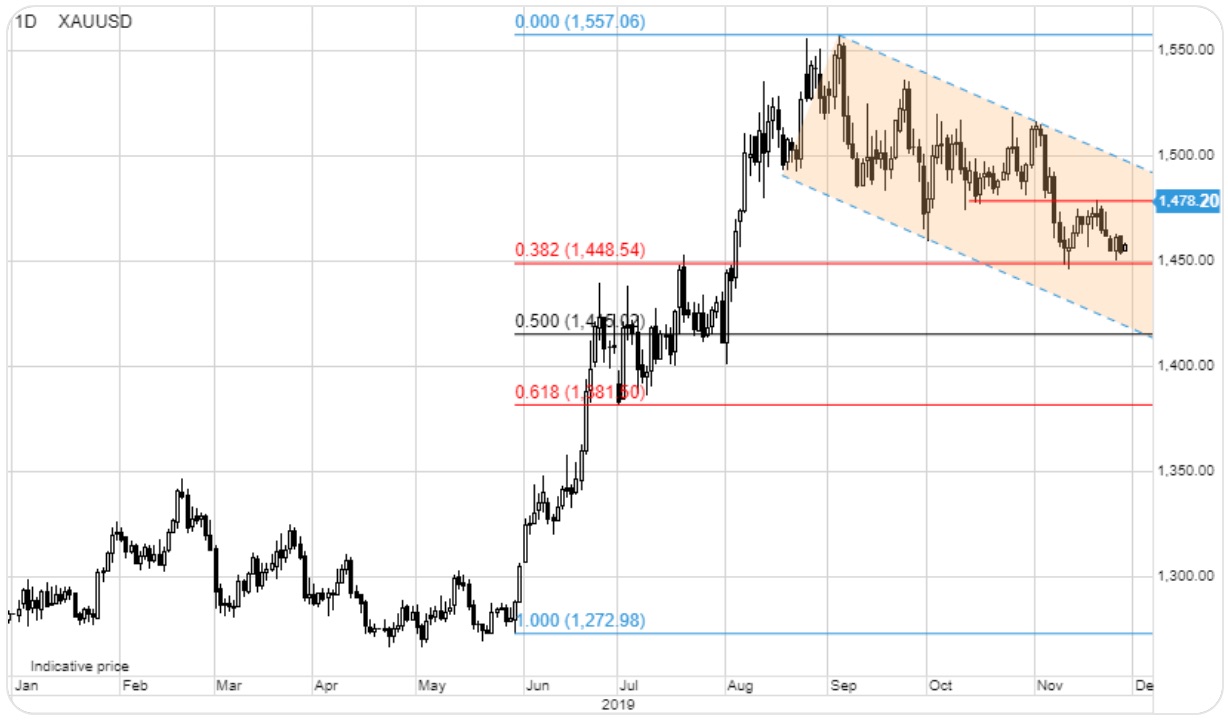 Global Economy On Crutches. The Only Solution…
Sven Henrich:  “The global economy is on crutches. This is why it requires constant central bank intervention and hence the talk of fiscal stimulus everywhere. The plain truth is it can’t do without. Organically it already is in recession. Intervention/stimulus/debt keeps kicking the can.

10 years after the financial crisis we’re exactly back to where we started: Requiring intervention, low rates and QE. Except now the world has $250 trillion of debt. And the only solution is to do more of the same. Genius.”

3) Core durable goods orders in October surprised sharply to the upside with a 1.2% m/o/m gain, well better than the estimate of down .2% but does follow a decline of 1.3% over the prior 3 months. It is though still down .4% y/o/y. Shipments too, which get directly plugged into GDP, also was better than expected with an .8% increase vs the forecast of down .2% and follows 3 months of declines. Internally though things were mixed in terms of breadth.

4) Q3 GDP was revised up to a 2.1% print from the first look of 1.9%. The estimate was for no change. An upward revision in inventories and a less weak private investment figure were the main reasons.

5) New homes totaled 733k, above the estimate of 705k and September was revised up by 738k from 701k. This is now 3 months in a row above 700k for the first time since mid 2007. Again, the strength is mostly out West and down South. The Northeast continues to suffer with sales here at the lowest level since June. Months’ supply rose to 5.3 from 5.2 as the number of homes rose modestly. The median home price was $316,700, up sequentially but down 3.5% y/o/y. Price mix tends to swing the pricing numbers sharply around month to month.

6) The Dallas manufacturing index in November was still negative, for a 2nd month, but less so at -1.3 vs -5.1 in October and a bit better than the estimate of -3.8. The outlook though was muted as the ‘Company Outlook’ component fell to -2.1 from +8.8.

7) In October, the y/o/y gain in private sector income jumped 5.2% y/o/y in October which is the best since April although the headline income print of no change was below the estimate of up .3%. Spending was as expected. The Savings Rate did tick lower to 7.8% from 8.1% as a result.

8) The Fed’s fav inflation indicator is going the right way for the American consumer but the wrong way with the inflation obsessed Fed. The core PCE rose 1.6% y/o/y vs the estimate of 1.7%. That happens to be spot on with the 5 year average.

10) The German November IFO business confidence index was 95 as expected, up from 94.7 in October. Both the Current Assessment and Expectations components were up a touch m/o/m. The ISM said simply, “The mood among German managers has improved slightly.” There was some more elaboration from the President of the IFO Institute in an interview where he said “We do have some stabilization, we do have growth. But the trouble is the difficulties are mostly coming from outside, from exports, which are weak. So what the government can do here with traditional fiscal stimulus policy is limited.”

11) The UK CBI retail sales index for November improved to -3 from -10 and that was better than the estimate of -11. It’s also the least negative since April. The CBI said “Retailers are entering the festive season with a bit of hope that sales will head up, with the strongest expectations in half a year. Actual sales have also stabilized and have nudged above average for the time of year. And employment has stopped falling after three years of decline. But Brexit uncertainty continues to weigh on investment plans for the year ahead which remain weak.”

12) French consumer confidence for November rose 2 pts m/o/m to the best level since June 2017 and is the 2nd highest print since 2007.

13) The GFK German consumer confidence index rose to 9.7 from 9.6 which was the lowest since April 2017 but still remains elevated.

14) The number of unemployed in Germany in November unexpectedly declined by 16k vs the estimate of an expected rise of 6k. The unemployment rate held at 5%, the lowest since reunification.

15) Singapore’s industrial production figure rose 3.4% in October, well better than the estimate of up .6%. Order growth was mostly driven by pharma and a flat line in electronics after a bunch of negative prints.

16) Japan’s October unemployment rate was unchanged at 2.4% as expected as was the job to applicant ratio at 1.57.

18) The Hong Kong people in large numbers spoke out for freedom and independence in a resounding victory for the pro-democracy side .

2) The November Chicago manufacturing index rose to 46.3 from the pretty depressed, in part GM strike driven, level in October of 43.2. That though was slightly below the estimate of 47. It marks the 5th month in the past 6 below 50. With new orders and backlogs, they both jumped but “There was, though, anecdotal evidence of firms being concerned about the outlook due to wider economic issues.” Employment remained below 50, falling a hair to 49.6 and the 3 month average is 48.3. The special question was: “Are you passing the cost of tariffs on or absorbing the costs?” More than half, at 57%, said they are not while 43% said they are.

3) The November Richmond manufacturing index printed below zero at -1 from +8 in October and vs the estimate of +5.

4) Pending home sales in October unexpectedly fell by 1.7% m/o/m instead of rising by .2% as forecasted. The NAR said that “markets where listing prices are around $250,000 are drawing some of the most significant buyer attention.”

5) The Conference Board’s consumer confidence index for November slipped to 125.5 from 126.1 and that was 1.5 pts below expectations. It’s now down for a 4th straight month to a 5 month low and below the year to date average of 128.2. The components were mixed as the Present Situation fell also to a 5 month low but Expectations rebounded off the lowest level since January. One year inflation expectations fell to 4.4% from 4.8%. There was some moderation in the jobs answers. Buying intentions were very mixed. This was the Conference Board’s bottom line, “The decline in the Present Situation index suggests that economic growth in the final quarter of 2019 will remain weak. However, consumers’ short term expectations improved modestly, and growth in early 2020 is likely to remain at around 2%. Overall, confidence levels are still high and should support solid spending during this holiday season.”

7) The November Eurozone headline CPI rose 1% y/o/y, up from .7% in October and one tenth more than expected. The core rate was higher by 1.3% y/o/y, up from 1.1% last month and one tenth more than estimated. That core print matches the highest since October 2015. Just imagine what happens to European bond yields if the ECB gets the inflation they want.

8) Hong Kong’s exports fell 9.2% y/o/y in October, a touch worse than the estimate of down 8.4%. It marks 12 straight months of y/o/y declines. Imports were down by 11.5%, more than the estimate of down 10.6%. A government spokesman said “Hong Kong’s merchandise export performance will likely stay weak in the near term, as soft global economic growth and uncertainties stemming from US trade policies continue to dampen external demand.”

9) South Korea’s October industrial production fell by 1.7% m/o/m, well more than the estimate of down .3%.

10) Japan’s industrial production index in October dropped by 4.2% m/o/m, about double the forecast of a decline of 2%.

11) Taiwan’s industrial production figure for October declined by 2.9% y/o/y, more than the estimate of down 1.7%.

12) Vietnam, a main beneficiary of the shifting supply chains out of China, saw November exports rise by 3.8% y/o/y, below the estimate of up 7.3%.

14) French consumer spending in October rose one tenth less than expected but offset by a like amount upward revision to September.

15) The Italian consumer confidence index fell to the lowest level since July 2017. As for the Economic Sentiment index, it was little changed from October as the manufacturing component is at a 5 yr low.

BUCKLE UP: The Economy Is About To Crater…Again