What’s Next For The Gold Bull, Plus The Temptation To Take Profit

With the price of gold getting more attention in the media, here is an important look at what’s next for the gold bull, plus the temptation to take profit.

Gold/Silver
August 22 (King World News) – Ole Hansen, Head of Commodity Strategy at SaxoBank:  “It’s been a relatively quiet week so far in precious metals with gold being stuck in a relative tight range around $1500/oz. The focus, apart from Greenland, has been squarely on the gathering of central bankers at the Annual Federal Reserve Policy Symposium in Jackson Hole, Wyoming. Fed Chair Powell is due to speak there on Friday at 1400 GMT. But following the release of the minutes from the July 31 meeting the odds for a disappointing speech, from a cutting perspective, seems to have risen.

My colleague John Hardy, Head of FX strategy, wrote this excerpt in his daily FX update:

“The FOMC minutes yesterday offered little comfort that the Powell Fed is ready to bring more up-front easing. Markets weren’t particularly reactive to the development, but the USD has bobbed back higher and could head higher still if Powell fails to deliver the right degree of dovishness at tomorrow’s Jackson Hole speech.”

Adding to this John wrote that “Mid-cycle adjustment” will go down as the Powell Fed’s “peace in our time” moment with the market movements, especially the flattening yield curve telling us the Fed remains behind the curve.

While the dollar is a tad stronger and stocks higher on the week so far bond yields remain low and with that support for gold remains strong. The lack of selling pressure, despite elevated “paper” longs through futures and exchange-traded funds, tells a story about continued support. The world’s first 30-year government bond offering a zero percent coupon failed to meet expectations yesterday when Germany fell well short of hitting its 2-billion-euro target. While raising concerns about a peak in bonds and buying fatigue the overall reaction however remained muted with global negative yielding bonds still exceeding $16.4 trillion bonds.

The mentioned mountain of negative yielding bonds and renewed Fed interest rate cutting cycle together with the risk of renewed quantitative easing measures (QE) remain the key pillars of support for gold. Adding to this the increasingly weird behavior of the US President as recession risks rise and the 2020 election gets closer, the ongoing trade war between the US and China and continued central bank buying.

We maintain a bullish outlook for gold with the technical target being $1585/oz. In the short-term however the elevated long remains a challenge with the market in need of a catalyst to send it higher in order to avoid the temptation from recently established longs to book some profit. On that bases potential buyers may need to stay a bit patient with key supports below $1500/oz being $1480/oz, the August 13 washout low followed by the Fibonacci levels highlighted in the chart below.

Bullish Target Of $1,585 Sill In Place For Gold 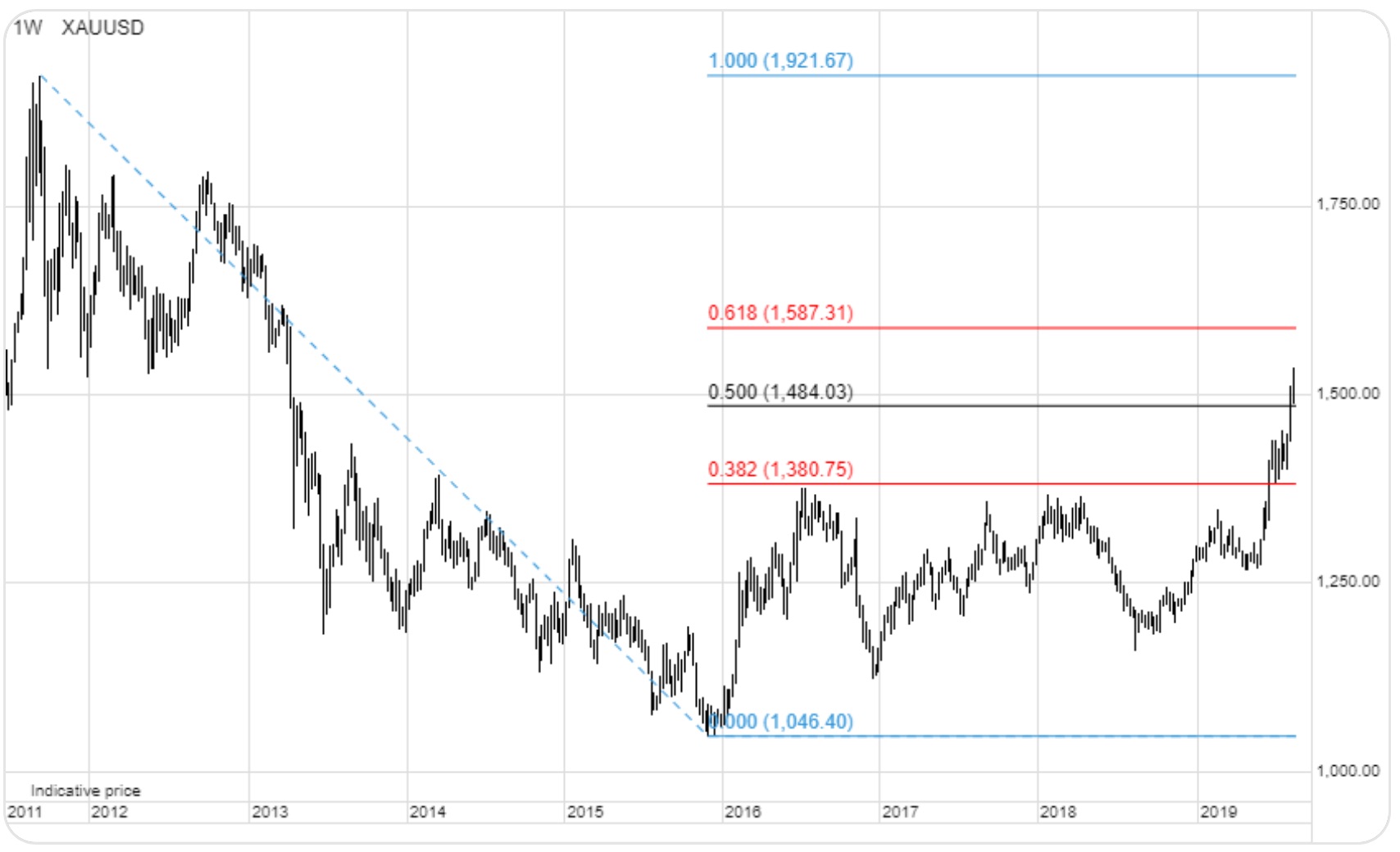 McClellan – The Whole World Is Abuzz CLICK HERE TO READ

How Is This Possible? Trouble Across The Globe, Nothing To See Here, Meanwhile This Is Imploding CLICK HERE TO READ

This Is Today’s Big News CLICK HERE TO READ

This Only Happened In The Gold Market 2 Other Times, Plus Look At These Famous Magazine Covers