Gold & Bitcoin, Bull & Bear Markets, Plus A Look At Europe

As we move through the second trading week in 2021, here is a look at Gold and Bitcoin, bull and bear markets and Europe. 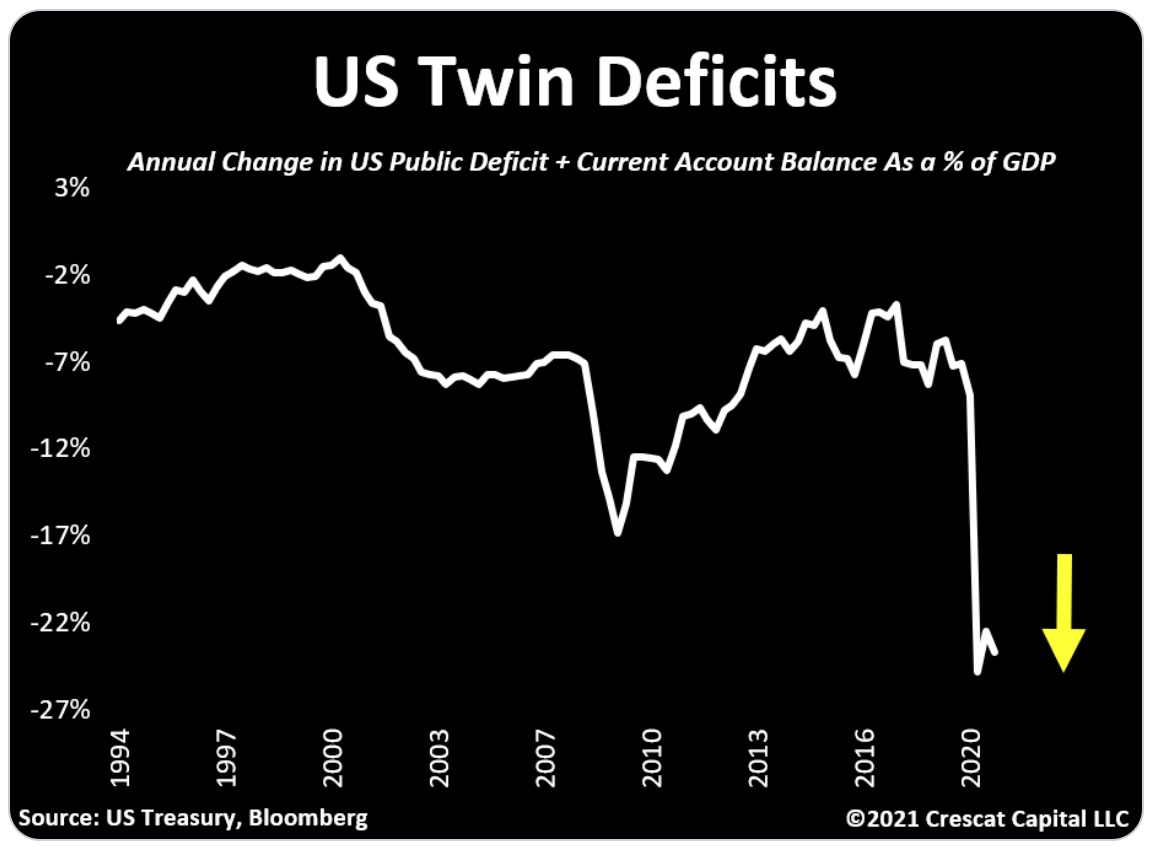 Bull & Bear Markets
Peter Brandt:  When I started at the Chicago Board of Trade in the 1970s, us newbie Boomers held the seasoned Silent and Greatest Generation traders in the high respect they deserved. Many Gen X, Y, and Zs strut around like alpha cocks and hens who invented trading. It’s quite humorous. Each new generation has contributed wonderfully to the endeavor of market speculation. Yet, everyone is brilliant in a one-way bull market. The bear markets are the things that separate children from their money…

Europe
Danielle DiMartino Booth at Quill Intelligence:  Heraclitus of Ephesus was a Pre-Socratic philosopher who pursued in his works none other than the light material of the First Cause for the creation of the world. Lofty ambitions be that they were, history remembers him best for the phrase Panta Rhei, or ‘life is flux.’ It stems from his assertion, “You can’t step into the same river twice.” His meaning here was that the very nature of life is change, or more commonly known (and heard) as the only constant is change. If you’re flexing your knowledge of the French modernization, you would trill off, “Plus ça change.”

But that would divert us to the wrong Latin-language country. For it is Italy that is the most familiar with the concept of change being a constant, at least as it pertains to its governments beginning in 1861. In the 160 years since, Italy has had 131 different governments (special thanks to Deutschebank’s Jim Reid for that great nugget). On average, each government survived for about 15 months. The current coalition government was flirting with exceeding the norm; it’s been in power for the last 16 months. Then, as if on cue, this headline hit the Bloomberg yesterday around the middle of the trading day: “Italian Ministers Quit Coalition, Putting Premier Conte At Risk.”…

This is one of the top performing silver stocks in the world! To learn more
about this remarkable opportunity click here or on the image below

As the story goes (add into mental imagery waving hands), former prime minister Matteo Renzi pulled his small centrist Italy Alive party’s cabinet members from the Guiseppe Conte government. Renzi lost patience with Conte’s methods of governing by decree instead of going through Parliament. Early Wednesday, Renzi’s cabinet approved a national recovery plan backed by European Union funds to help foment momentum in Italy’s post-COVID economy. For a country with a government debt burden well north of 100% and a sorry track record for potential growth, any shot in the arm would seem welcome.

Plus, political chaos in the middle of a pandemic? Being Italians, we can’t feign surprise. As for the investor hats we don (stylishly), a typical reaction to such unsettling news should have generated a backup in Italian government bond yields (or BTPs) and a widening in the spread to the safer haven of German Bunds. Neither happened. In fact, the entire Italian yield curve bull flattened in yesterday’s session; yields on longer duration bonds fell faster than those on shorter termed BTPs. Italy’s 10-year bond yield registered a five-basis point (bp) decline. And the 112-bp spread over the 10-year German Bund was a five-year low.

Grab a CIG to put things into perspective (and we don’t mean a cigarette). CIG stands for Cassa Integrazione Guadagni (Wage Guarantee Fund), a government program where the salaries of workers whose firms are facing severe economic hardships are paid by the government for a period of six to ten months. The workers are in effect on temporary leave though they continue to receive roughly 80% of their previous salary from the government.

CIG tracks the Italian labor cycle just like initial jobless claims in the U.S. Over the course of the pandemic, CIG spiked from 200,000 in March to 7.7 million in April, the peak for the COVID shock and subsequently fell to 1.5 million in September. The resurgence of the virus has, however, caused a backup of 1.1 million being added to the Wage Guarantee Fund in October and November, leaving CIG at a level of 2.6 million, or 12 times greater than the 12-month average ended March 2020.

A relapse in the labor market risks a double-dip recession. To that end, both Italian industrial production and retail sales posted significant downside surprises in November. The fourth-quarter-to-date average for industrial output was down 2.1% at an annual rate compared to the third quarter, while retail activity on the same basis stands 1.0% below the prior three-month timeframe. A further drag in December raises the risk that Italy’s economy contracted in the fourth quarter. 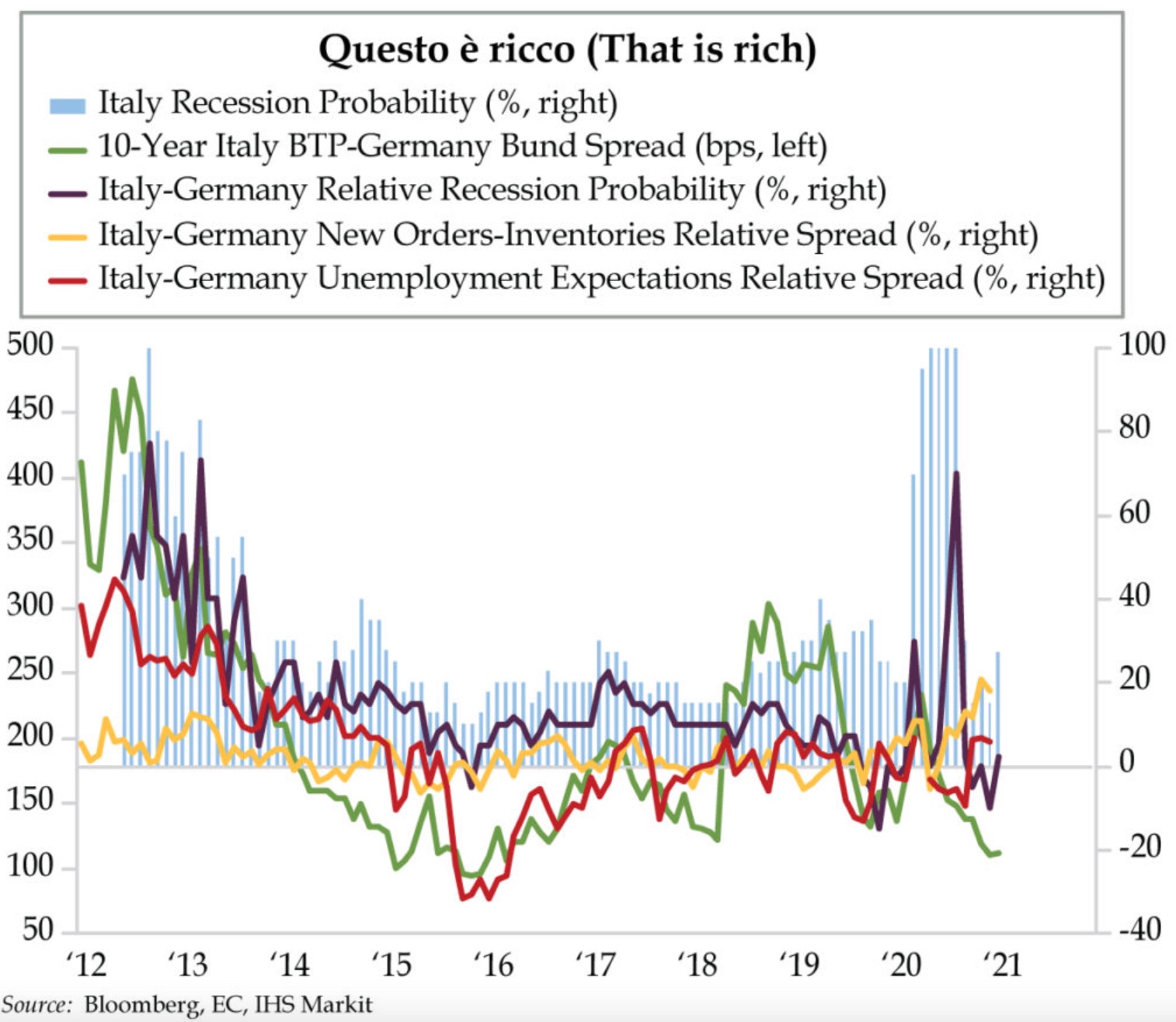 And while the 10-year BTP-Bund spread (green line) is a good financial market proxy to gauge the likelihood of recession, Italian rates traders were unconvinced.

Since the BTP-Bund spread is a relative comparison, we added Italy-Germany relative recession probability to the mix (purple line) – a simple difference between consensus calls for recession in the two countries. After a bout of Italian bullishness in the fourth quarter that saw Italy’s recession probability register an unusual inversion to Germany’s, things reverted in January to a marginal positive 2.5 percentage point spread.

Shedding more light is the Italy-Germany unemployment expectations relative spread. It swung “in favor” of Italy over Germany in the three months through December, the longest such stretch of “underperformance” in this leading labor cycle indicator.

A final relative assessment is captured by the Italy-Germany New Orders-Inventories (of inputs) relative spread (yellow line). This demand-supply spread compares the short-run industrial production leader in the Euro Area’s top two manufacturing economies. In December, at +17.7, Germany’s outperformance stood in stark contrast to Italy’s -0.3, suggesting the potential for factory weakness to bleed into this year’s first quarter.

The only constant in Italian politics is change. It will test rates traders’ mettle to see who blinks first. Fundamental trends are not consistent with the richness in BTPs to Bunds. Correction risk is rising.