Gold and silver are surging as long term unemployment hits a staggering 39.5%, but here are the key levels to watch.

Gold
February 8 (King World News) – Ole Hansen, Head of Commodity Strategy at Saxo Bank:  A decent recovery in gold as reflation receives increased attention. Next hurdle at $1841 ahead of the big one at $1875 (see chart below). 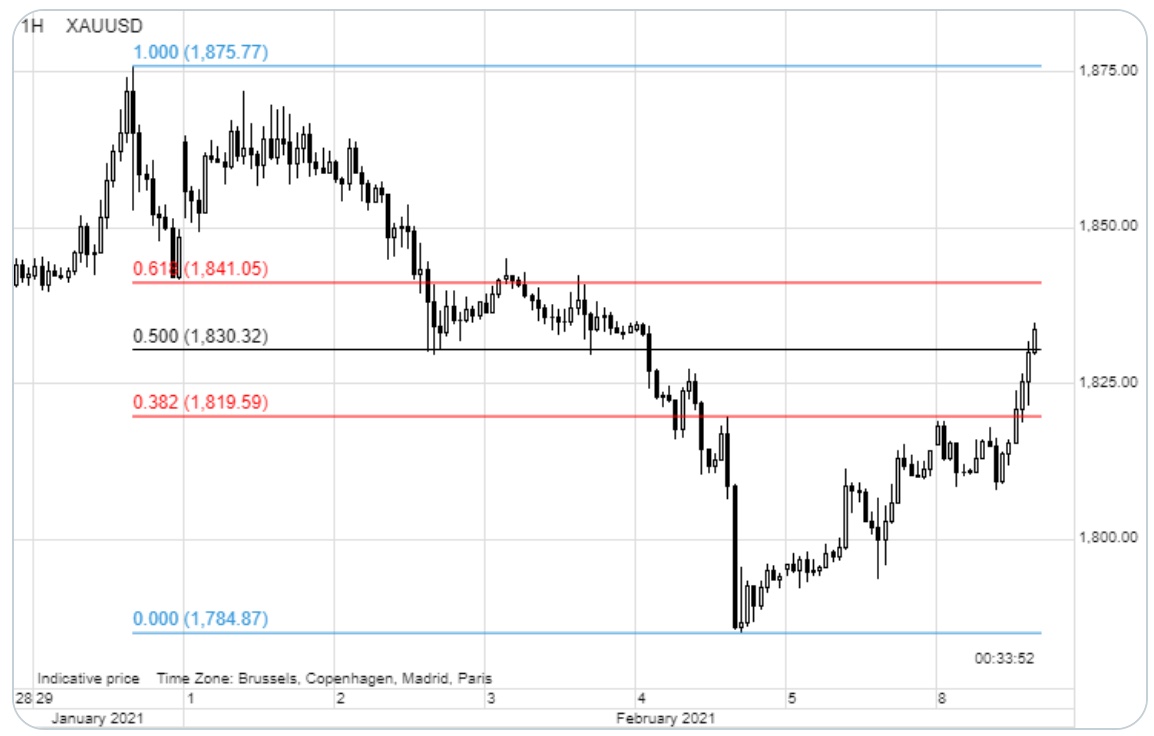 Above $28 Will Be Massive Breakout For Silver 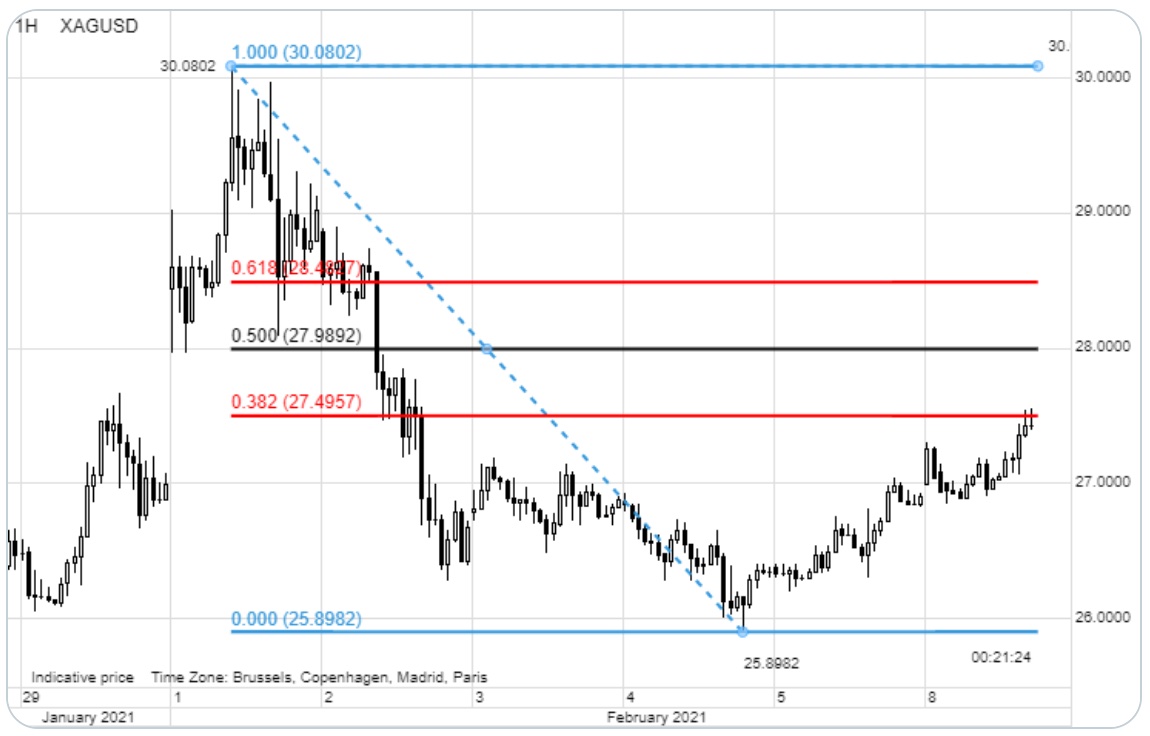 Danielle DiMartino Booth at Quill Intelligence:  A gorgeous raven-haired, virtuous young girl in 17th century Exmoor, a remote area of Devon, England, is abducted by bandits who raise her as their own. Such was the setting for R.D. Blackmore’s 1869 novel whose main character and title were one in the same — Lorna Doone. They say cooking is love made visible. Though no records establish the connection, this week does culminate with Valentine’s Day. In that spirit, we’re going with Emily Malloy being so inspired by Blackmore’s popular romance that she cooked up a recipe for a melt in your mouth, buttery shortbread to express her love for her husband John before they emigrated from County Cork to Cook County where they opened a bakery. By 1891, the Chicagoans were entering their golden years. Prudent retirement planning in mind, John sold Emily’s beloved Lorna Doone recipe to the F.A. Kennedy Steam Bakery, which itself had introduced the world to the Fig Newton.

That baker’s subsequent merger with the New York Biscuit Company created the National Biscuit Company which today brings us, among those mentioned, Chips Ahoy, Nutter Butters and Oreos. Last Thursday, Nabisco announced after 63 years in operation, it was closing its Fair Lawn, New Jersey plant that bakes Lorna Doone and other brand names. About 600 positions will be lost. Of the company’s three East Coast facilities, Atlanta will also close leaving only the Virginia plant open. As per the company of the closures, they “would have required significant investment to bring them to the modernized state required for the future.”

No doubt, automation’s presence is increasingly being felt in industrial America, a trend that preceded the massive demand and supply shocks inflicted by the coronavirus. Friday’s January jobs data paint a picture of an economy that’s been transformed in the space of 12 months. A year ago, the percentage of the unemployed out of work for 27 weeks or more was 19.8%, four percentage points higher than the postwar average of 15.9% and emblematic of the scarring that had endured more than 11 years after the Great Recession ended in June 2009.

Long term unemployment (27 weeks or longer, green and light blue bars combined) is a thorn in any central banker’s or finance minister’s side. It lowers potential growth as this cohort becomes less employable as a factor of time, stigmatized as their skills atrophy and resumes dust over. It’s critical to appreciate how rare this type of drag has historically been on the U.S. labor force. Until the Great Recession, we’d not seen a reading north of 30%. The deep damage inflicted by the financial element of that episode, though, pushed long-term unemployment to 45.5% in April 2010.

As QI’s Dr. Gates explains, “Long term unemployment is a unique indicator in that it is both a leading indicator, bottoming before recessions and a lagging indicator, topping after recoveries are underway. The COVID-19 shock has us on the precipice of another foray north of the 40% mark.”

One of the distinctions of the era preceding the Great Recession was the dominant role residential real estate played in the job market. QI amiga Michelle Meyer is Chief U.S. Economist at Bank of America. But back then, she was an up-and-comer at the bank who made her bones as a housing expert. By her calculations, at the peak of the housing boom, four in ten U.S. workers were either directly or indirectly employed in residential real estate.

The rapidity with which housing has roared back reminded us of Michelle’s work way back when. It’s more than the exodus to the exurbs. The Federal Reserve’s mortgage-backed securities machine has pushed mortgage rates to record lows and Fannie Mae and Freddie Mac have given new meaning to expedited underwriting with automated appraisal waivers that negate the need for warm bodies to verify values. (That’s a good thing as living and breathing appraisers are struggling to assign values as high as the prices buyers are willing to pay.)

No surprise, this frenzy has created a groundswell of demand for workers beyond single-family construction. As you can see on the red line, the ranks of real estate agents are within spitting distance of their housing bubble heights. The same cannot be said for the army of mortgage brokers and others facilitating properties changing hands (blue and green lines).

But they’re getting there, and fast. And that’s not good news for the long-term unemployed. Residential real estate was not productivity-enhancing then; nor will it be today. Housing activity is, however, easy to transmit given the available tools on hand – the Fed’s QE.

As for the politicians, the risk is their focus has already shifted to the Midterm elections. If Democrats use reconciliation to force a huge stimulus package, odds are low there will be sufficient remaining political capital to pass meaningful legislation aimed at productive means. “If the stimulus spending is geared towards infrastructure that runs multiple years, that’s the real answer. The public has the funding. The private has the labor,” Gates added.

In October, long-term unemployment hit 32.1%; it has risen every month since and now sits at 39.5%. To combat the building labor market sclerosis requires those charged with hiring decisions move past automation and cost cuts to organically building anew. The dueling discussions of fiscal cliffs and vaccine rollouts must be laid to rest.

Also released! Here Is Where The Gold & Silver Markets Stand After A Wild Trading Week CLICK HERE TO READ.

Gold Surges $30, Silver Back Above $24, But Look At The Bullish Setup