With stocks plunging as we kickoff the last trading week in January, one professional warned, “God help us when this bubble begins to deflate in earnest!”

Below is a look at ending QT.
But first, take a look at this!

Look Out Below!
January 28 (King World News) –  Here is a portion of a note sent to KWN from Lundeen: God help us when this bubble begins to deflate in earnest! Look at the chart below; the correction seen in it for the 2007-09 sub-prime mortgage bear market was also the #2 largest percentage decline in the Dow Jones since 1885; a massive 54% market decline only exceeded by the Great Depression’s 89% decline.  Yet within the context of the four decade long bull market seen in the chart, this massive bear market is only a correction!

“God help us when this bubble begins to deflate in earnest!” 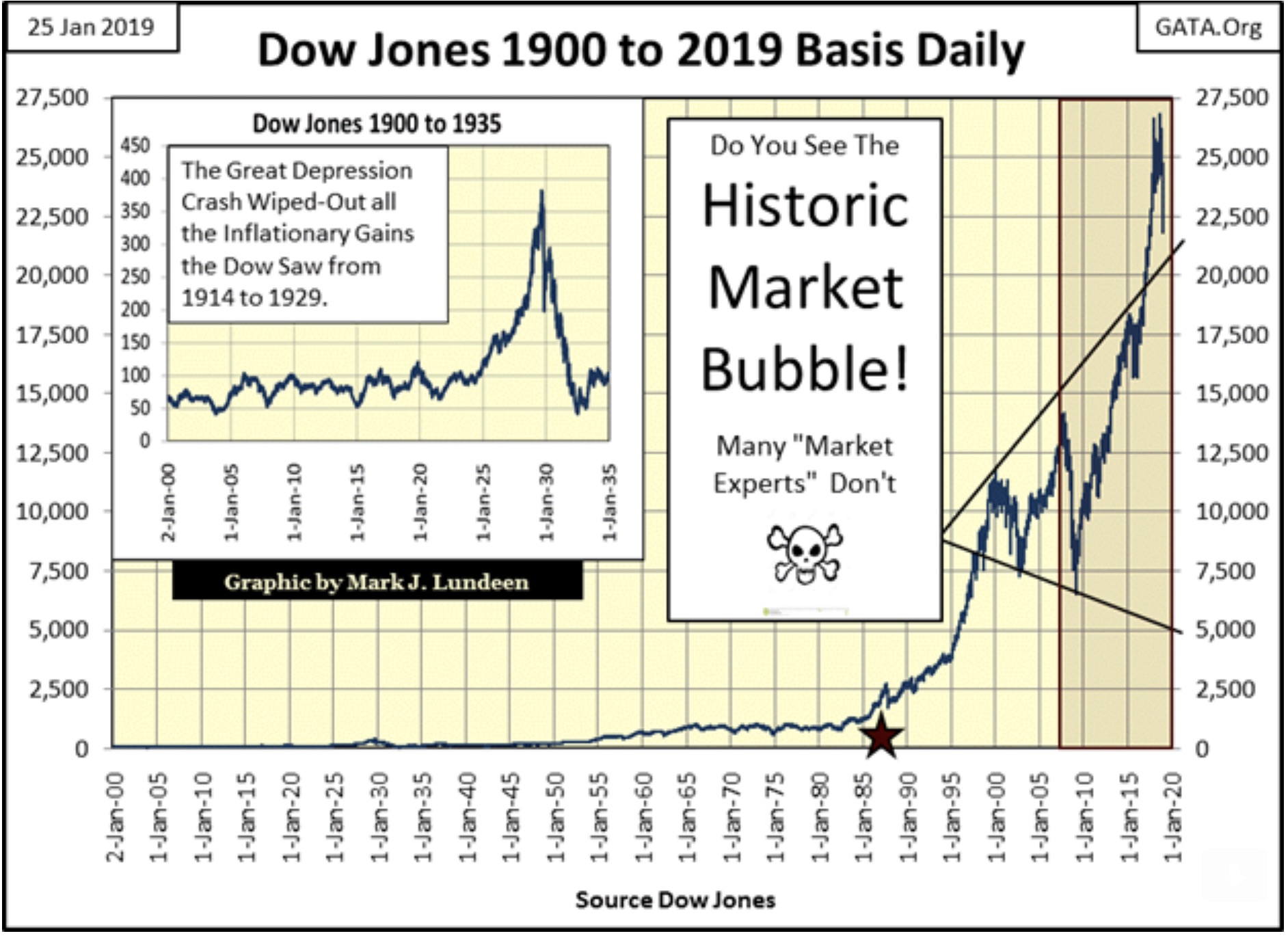 Here is a portion of today’s note from Peter Boockvar as the world awaits the next round of monetary madness:  Let’s start with the Fed ahead of Wednesday’s statement and press conference. As we know, they’ve taken a time out with respect to rate increases, whose hikes have had the most direct impact on economic activity. They’ve now shifted attention, as pointed out by the WSJ Friday, to the balance sheet…

The direction of the balance sheet has had the biggest impact on stock prices (QE did not improve the economy when it was on, it only lifted asset prices). After only about a 10% reduction in its size and the Fed already getting cold feet on QT, I believe it’s safe to say that the S&P 500 has taken over monetary policy from the Fed. The Fed blinked in 2013 over the bond taper tantrum and they are doing so again in the face of the stock market tantrum in Q4 2018.

“QE is monetary policy for rich people“
Also, it is quite ironic that just as the rhetoric on wealth taxes and 70% tax rates get heightened over frustration with the large ‘wealth gap’, we have the Fed thinking about stopping QT sooner rather than later. As my friend Steve Eisman has said in the past and predicated on clear evidence as stated above that QE only lifted asset prices, not economic growth, “QE is monetary policy for rich people.” Unfortunately, many politicians and central bankers don’t connect all the dots. I’ll add what the Eagles have sung, “You can check out any time you like, but you can never leave.”

King World News note:  Boockvar and Eisman are correct. The Fed is trapped and you can bet this will be incredibly bullish for the price of gold when the world finally realizes the Fed’s conundrum.

ALSO RELEASED: Greyerz – Sources Close To De Gaulle Have Informed Me That De Gaulle Was Certain The US Had No Gold Left CLICK HERE TO READ.