As we get ready to kickoff trading at the start of a new week, today the man who has become legendary for his predictions on QE and historic moves in currencies, warned King World News about an increase in fake gold bars and coins and also said the price of silver is ready to explode higher.

Fake Gold Bars & Coins
March 18 (King World News) – Egon von Greyerz:  “In the US, fake gold is now a growing problem that is not being tackled. Congressman Alex Mooney (not Money!) has just written to the US Mint of the growing problem of high-quality counterfeits. He also wrote a letter to the Mint in November 2017 but the Mint responded that the problem was not significant. But the US Secret Service has since briefed the office of Congressman Mooney about the extent of the problem and the lack of supportive actions of other agencies…

Egon von Greyerz continues:  “Counterfeit gold coins have been around since the coinage of gold first started in the Greek city of Lydia around 600 BC. 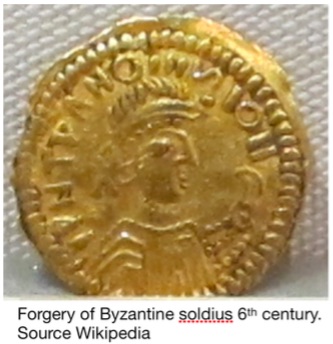 Australian News Exposes Fake Chinese “Gold Factory”
Fake gold bars and coins are ubiquitous and many owners of gold are not aware that they have fake gold. I realized the wide widespread presence of fake gold when I was interviewed in Sydney by an Australian television news team a few years ago. This team had just visited a “gold factory” in China. They had covertly filmed the manufacturing of fake bars and coins. They told me that they bought $500,000 of fake gold for $500.

People Could Not Tell The Gold Was Fake
These were gold bars and coins with well known brands of LBMA refiners in Switzerland and Australia. For a layman it was not possible to tell that they were fake. There clearly could not have been much gold in these bars since the price was 0.1% of the value of real gold. It would probably have been enough to scratch the surface to find the tungsten which I assume was the metal inside. 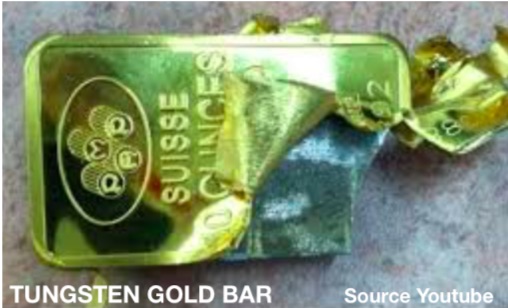 A Brave New World
Learning about fake gold factories in China gave me invaluable information of what will happen when the gold price goes up. It became very clear to me that the more gold appreciates, the more fake gold we will see on the market. The natural consequence of a higher gold price will be a surge of gold factories around the world making fake gold. As gold goes to $2,000, $5,000, $10,000 and much higher when hyperinflation sets in, there will be opportunistic “entrepreneurs” flooding the gold market with fake bars and coins. The coming gold mania will create a massive demand for gold and desperate retail buyers will buy gold from any source, unaware if it is genuine or not. The coming shortage of gold will force buyers to obtain gold form any source whether it is Ebay or disreputable dealers.

Eventually the media will catch on to the prevalence of fake gold and warn buyers not to buy gold. Professional investors are unlikely to be affected by this but many retail buyers could be badly hurt. The consequence of a “Wild West” gold market will be a concentration of the market to the most reputable dealers who trade within the chain of integrity. Some smaller dealers will survive but only the ones who have established a long record of integrity and honesty. Any serious dealer must have the testing equipment which can assure the quality of the gold.

“The Chain Of Integrity”
The market is likely to concentrate to bigger gold dealers which operate within the chain of integrity. These companies will only buy and sell gold produced by LBMA (London Bullion Market Association) dealers and refiners. But that is of course not enough since fake gold producers can make gold with the markings of an LBMA refiner.

The absolutely safest way to acquire gold is to buy directly from a top class LBMA refiner. The Swiss refiners have the reputation of producing the highest quality gold bars in the world. Around 70% of all the global gold bar production comes from the Swiss refiners. The majority of the bars made in Switzerland are 9999 (4 nines) or 99.99% purity.

Matterhorn/GoldSwitzerland Buys Client Gold Directly From Swiss Refiners
When our company (Matterhorn, GoldSwitzerland) buys gold for clients, we always buy freshly minted gold bars directly from the Swiss refiners like Argor or PAMP. That guarantees the quality to the client. There is another very important factor that makes this chain of integrity totally unique. If we buy freshly minted gold from a refiner one day for a client and the client (for whatever reason) decides to sell the gold the next day. We would then sell the client’s gold back to the same refiner. Even if the refiner receives the gold in return in the same sealed boxes that he delivered to us, the refiner would still melt all the bars down in order to guarantee the quality.

It is this attention to detail and perfection that makes the Swiss gold refining industry totally unique and the biggest in the world. Gold exports account for 29% of Swiss exports and makes it a strategic industry. This also is a virtual guarantee that gold is unlikely to ever be confiscated in Switzerland. Dealing directly with a refiner, which a retail buyer cannot do, also has the advantage that the refiner is always guaranteed supply. The 3,000 tonnes of annual mine production must be refined and the majority of that will go to the Swiss refiners.

Massive Shortage Of Available Gold Looms
This is a very important consideration when gold demand goes up and there won’t be sufficient gold to satisfy all the new buyers. When the paper gold market collapses and the paper longs ask for delivery there will be a massive shortage of gold. The increased demand cannot be satisfied by more production but only by a much higher price. At that point, only the companies that have a long established relationship with refiners will get supply of gold.

After a 12 year bull market, gold has been in a shallow correction for 6-7 years. The correction bottomed between 2013 and 2015 depending on which currency we measure gold. The uptrend since that bottom has been very slow and more of a sideways consolidation. But gold in some currencies like Canadian and Australian dollars are at the 2011 top and others like the pound are not far from it. It is only gold in US dollars which hasn’t quite recovered yet due to a temporarily stronger dollar. That will soon change. (See charts in my last KWN article).

It would be unwise to believe Trump’s new economic advisor, who just advised investors to buy the dollar and sell gold. Larry Kudlow is a perma-bull who will most likely not last long in his new position as all markets go against him such as falling dollar and stocks, higher gold and interest rates.

Silver Is Like A Coiled Spring
As gold most probably soon takes off, silver is like a coiled spring which will explode. For 3 1/2 years, silver has traded in a range which has become increasingly narrow. In the last 15 months the range has got even smaller as seen in the chart below. The technical indicator MACD in the chart has also shown very little oscillation for 4 years and even less so since the beginning of 2017. The upper and lower trend lines also show the narrowing range.

As often when there is a breakout out of a triangle, there can first be a move in the other direction. Thus we could see a brief move down of gold and silver first and then a very fast surge to the upside.

The gold/silver ratio, which is just above the 80 level for the 4th time since 2003, is another very good indication that silver will lead the surge of the precious metals. Every time the ratio reaches that level and turns down, silver moves up twice as fast as gold. 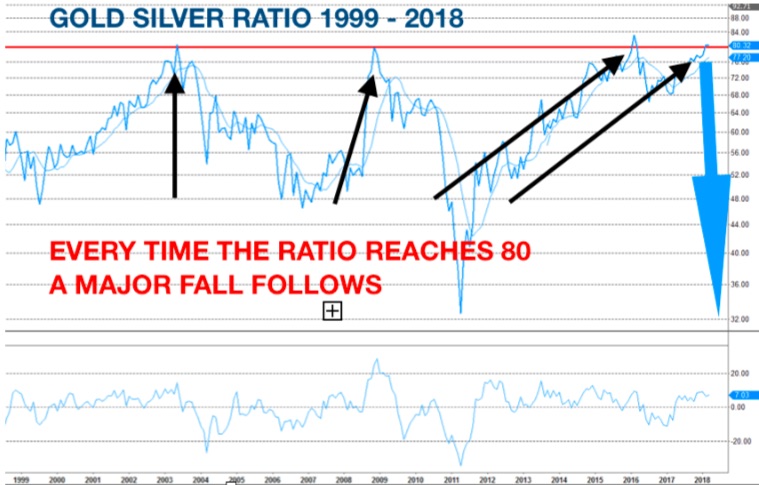 Thus, there are many indications that silver is now ready to move up very fast. Since there is very little physical silver available, the coming move should be explosive. So hold on to your seats but buy silver (and gold of course) first.”

IMPORTANT:
King World News note: It is extremely important to understand that Matterhorn Asset Management/Gold Switzerland are the only company in the world that gives full title and control of the physical gold and silver directly to their clients.

Also, I know many of the KWN readers around the world have already become clients of Matterhorn Asset Management/Gold Switzerland.  For those of you that have waited, it is important to establish a relationship with them in order to ensure the purity of your gold and silver purchases, and also to ensure safe storage of your gold and silver in Swiss vaults, fully titled and controlled in your name!