Global stock markets are selling off on Evergrande worries amidst the global debt binge.

Evergrande And The Global Debt Binge
September 20 (King World News) – Peter Boockvar:  Evergrande is certainly the big micro story right now with its extraordinary amount of debt and liabilities totaling $300b and upcoming interest payments they just can’t meet and never could based on the cash flow of the business. The only thing that kept it going was access to external funding that no longer exists. This accident is now spilling over into other property developers but let’s not miss the big picture macro of a world that has gorged on debt with the help of cheap and easy money. Last week the Institute of International Finance said global debt got to almost $300 Trillion in Q2 with the only respite that the economy grew somewhat quicker so the debt to GDP ratio fell slightly. That said, in the chart below you can still see how high it still is. 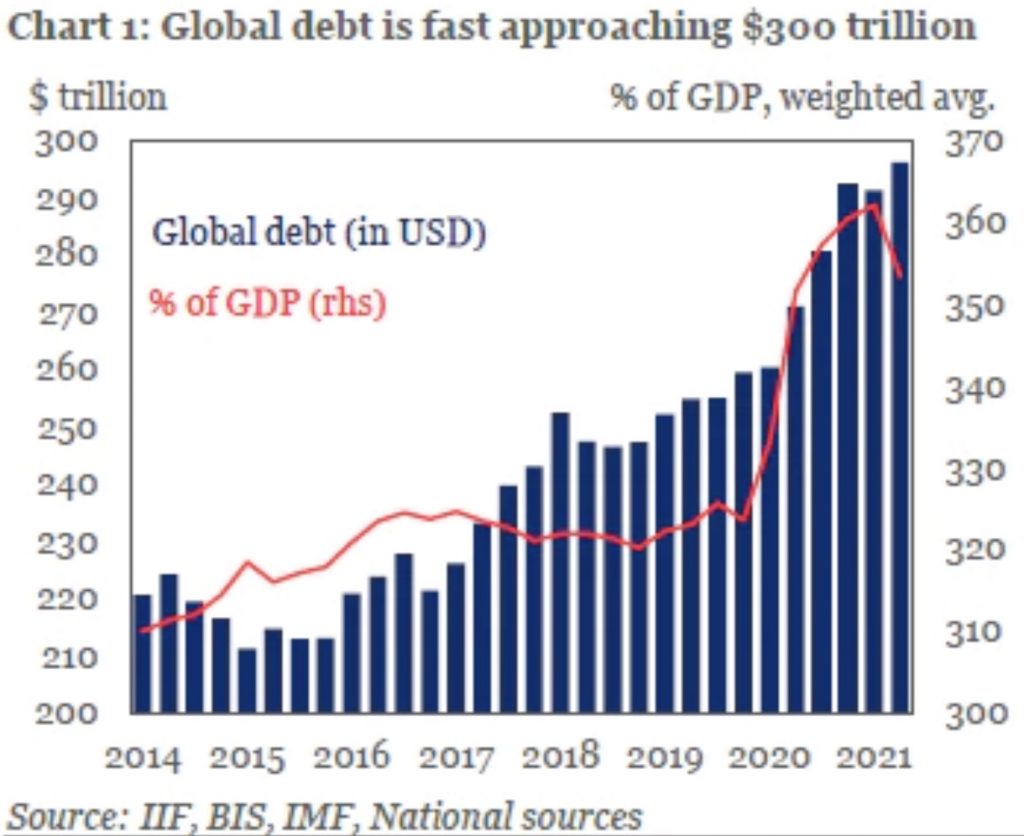 Inflation Story And The Global Liquidity Spigot
This gets to the inflation story and the global liquidity spigot that is no longer fully flowing, though still is an avalanche. It’s not just the Fed that meets this week. We also hear from many others including the Bank of England, the Riksbank, the Swiss National Bank, and the Bank of Japan. Inflation limits the options of central bankers. The lack of it was basically an all access concert pass over the past 10+ years. But now, all that QE which has created massive monetary inflation is now flowing into consumer price inflation which is itself a broader problem because what do they respond to? Growth? Debt levels? Financial excesses? or the Inflation which then puts at risk the previous choices. Central banks wanting higher inflation was always a ‘be careful what you wish for’ thing and that thing is now here…

World Credit Markets
Lastly on this, we’ll soon see what this means in developed world credit markets where borrowers have had a party over the last few years, particularly over the past 12 months thanks to the central bank response to Covid. The Barclays CCC high yield option adjusted spread to Treasuries is at only 5.1% with a yield to worst of about 6%. In September 2019 (thus taking out the Covid influence) the OAS was at 870 bps with a yield to worst of almost 11%. 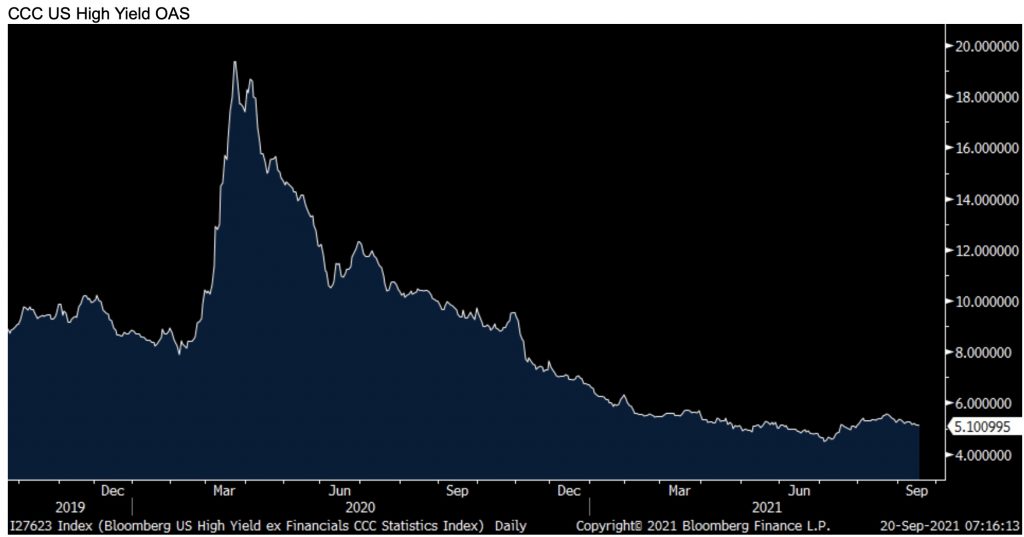 You own a European high yield bond? With a yield of 3% and an OAS of just 280 bps, what kind of risk cushion does that give you? 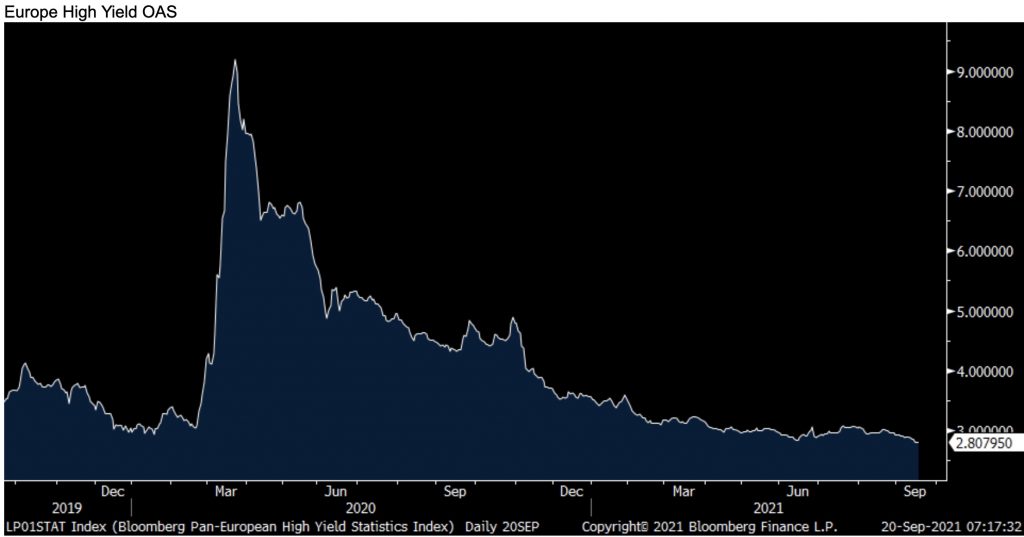 Meanwhile In China
Back to China, the positive here is that just maybe Chinese officials are putting to bed the large ‘moral hazard’ that has trained many to think the government was always going to bail them out. At least for Evergrande bondholders right now, it looks like that safety net is now broken which will eventually lead to a sturdier financial system. However, that bridge is littered with potholes and is a long one.

With inflation, Germany said its Producer Price Index for August spiked another 1.5% m/o/m and 12% y/o/y. Year to date it is running at an annualized rate of 15%. Yes, maybe this pace of increase is transitory but what is that really saying off these levels. 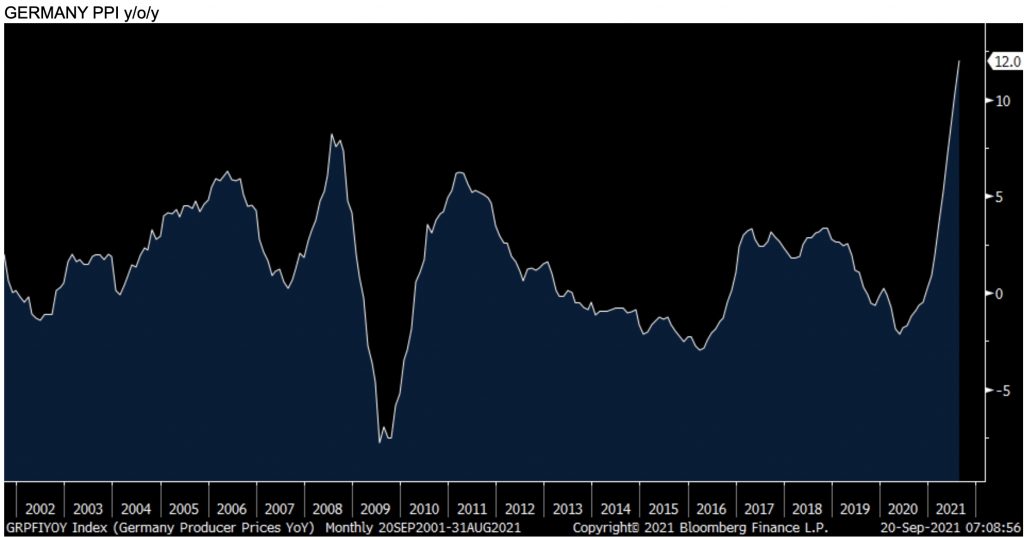