On the heels of another chaotic trading week in major markets, today one of the top economists in the world sent King World News an incredibly powerful piece warning that a full-blown panic is coming as this historic market bubble implodes.  Below is the fantastic piece from Michael Pento.

June 15 – (King World News) – Even though the major stock market averages are flat for the first six months of the year, by nearly every measure the stock market is still extremely overvalued. This point is not lost on Ms. Yellen and company, as the Fed Chair herself has recently assented that the current value of stocks are “quite high.” Given this, the Fed must privately be afraid that even a small change in the Fed Funds Rate could serve as the needle that pops the massive bubble in the stock market. 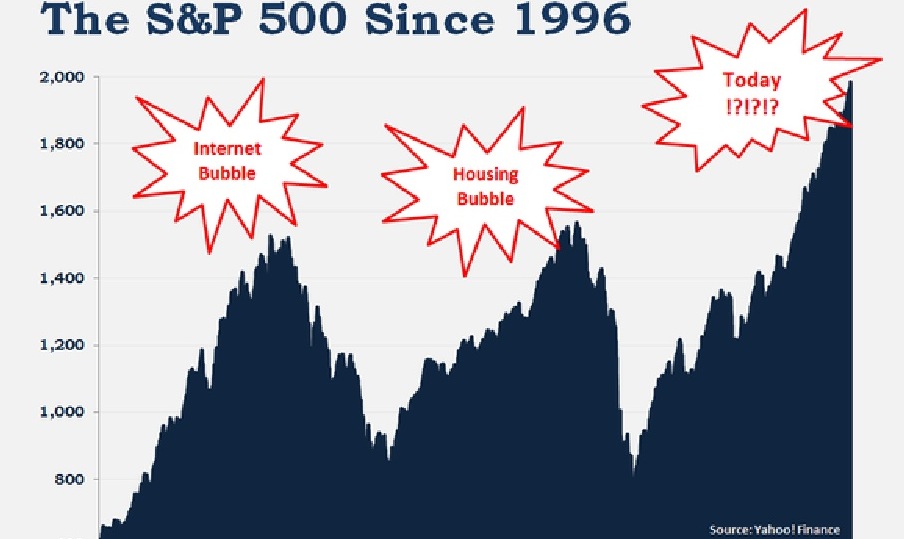 Exactly How Overvalued Is This Market?

First, the median Price to Earnings (PE) multiple on New York Stock Exchange (NYSE) equities is currently off the charts. Using this measure, the 2,800 NYSE stocks are at the highest level since records began since 1945.

Adding to this, the cyclically adjusted PE ratio (CAPE) for the S&P 500, which uses real per-share earnings over a 10-year period, is at a current level of 27.17. This is far higher than the long term average of 16.61, and only slightly below the 32.56 level achieved at the start of the Great Depression in 1929.

And then we have the Q ratio: the total price of the market divided by the replacement cost of company’s assets. Historically this measure averages around .68. Today this ratio sits at 1.14, the highest level recorded since the dotcom bubble, and an increase of 100% from its value in 2009. Using this metric, the value of U.S. equities is more than 10% higher than the cost to replace all of the underlying assets.

Finally we have the Total Market Cap to GDP Ratio, which represents the value of all stocks in the Wilshire 5000 divided by total U.S. output. This value indicator, at 125% of GDP, is higher than any other time in history outside of the dot.com era. And is about 75 percentage points greater than it was throughout the period 1975-1995.

As you would expect, Wall Street commentariats argue the current PE ratios are justified given the level of low interest rates. After all, they will find any excuse to keep pushing products to their clients.

However, what they so conveniently overlook is the growth rate associated with these lofty valuations. According to Case-Shiller, the average historical year over year growth rate of S&P 500 earnings is 3.8%. With earnings currently growing at just 0.7%, the PE ratio in relation to earnings growth, known as the (PEG) ratio, is now off the charts. Likewise, the overall economy is struggling to deliver any growth at all, even while interest rates are at zero percent. Therefore, the salient question to ask is: are these low rates sustainable?

Low interest rates should be the product of hard money policies from central bankers, balanced government budget deficits, and plummeting debt to GDP ratios. However, the current states of global economies and central banks are the complete opposite conditions. 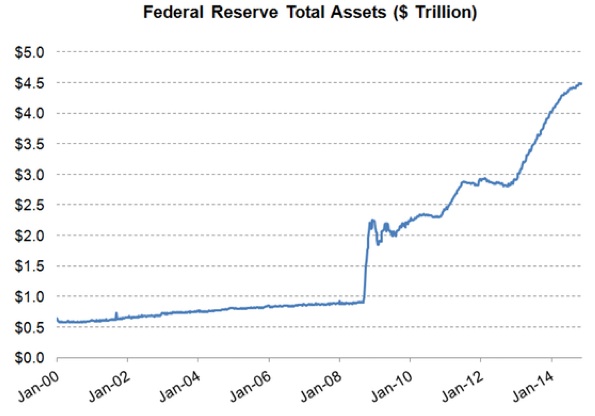 For example, the Fed’s balance sheet has ballooned from $800 billion before the Great Recession, to $4.5 trillion today. In the same vein, U.S. budget deficits have ballooned from $200 billion during 2007, to more than half a trillion dollars today. What’s more, these deficits are guaranteed to explode with the aging population and the eventual mean reversion of interest rates. And, of course, our national debt has doubled from $9 trillion, to over $18 trillion. However, what’s so incredible is these factors should have–if subject to free market forces–sent Treasury yields soaring. Nevertheless, bond yields have inexorably plunged over the past 7 years.

With global interest rates artificially manipulated to record lows by central banks, the search for higher-yielding investments has encouraged humongous risk taking in real estate, sovereign debt and equities. But what will happen to these assets when rates mean revert—or even surge to much higher levels?

Mean reversion is guaranteed to occur when central banks eventually become successful in creating runaway inflation and finally awaken the slumbering bond vigilantes; who will take rates much higher with or without the Fed. Or, rates must rise even if the Fed is unsuccessful in creating growth and inflation. This is because the protracted economic malaise will eventually cause the private sector to arouse to the fact we are an insolvent nation that cannot pay back, or even easily service, that $18 trillion of debt without a sustained period of above trend GDP growth. And the same can be said for other nations who’s Central Banks have artificially manipulated rates into the basement; such as Europe and Japan.

What Happens When The Bond Bubble Bursts?

Household debt service payments are now just 9.9% of disposable income. This is the lowest level since 1980. But this isn’t because households have paid off their debt; it’s just because interest rates are at record lows. In fact, household debt now stands at $13.5 trillion; over $8 trillion higher than it was back in 1980. As a percentage of GDP, it rose from 45% then, to 76% today. Therefore, when interest rates rise and the true burden of debt service is revealed, consumer defaults and bankruptcies will reemerge just as they did during the Credit Crisis.

And then we have the renewed game of flipping real estate courtesy of the Fed. This latest incarnation of the bubble provides us with anecdotes of turning over NYC apartments for, in one recently documented case, a $20 million dollar profit in a matter of months. But what happens to the flippers who once again get stuck with that $70 million penthouse when interest rates rise? We saw this movie already back in 2008; banks stop lending and consumers stop borrowing when the economy crashes due to rising rates. And flippers will be trying to dump penthouses, if not jumping from them.

Turning back to the stock market, ZIRP has led markets to unsustainable levels, and has turned executives into gamblers. According to my friend, David Stockman, using data supplied from Alhambra Investments, $550 billion in junk-bond debt was issued between the years 1996 thru 2002. However, nearly double that amount ($975 billion) has been issued in the last three years alone. The primary purpose of this money was to engage in financial engineering, not to purchase capital goods and to grow the economy.

Once interest rates rise it will become a complete disaster for the bond, real estate and equity bubbles.  The Fed’s entire fatuous strategy was to inflate asset prices to generate consumption and boost GDP. But what its free money policy really created was unsustainable asset bubbles that engendered artificial and ephemeral growth.

Therefore, investors should not take any solace from believing the current PE ratio on stocks is merely, “just a little rich.” In truth they are at or near near record valuations; and these levels are even more unjustified and unsustainable given the lack of robust growth and the tenuous condition of low interest rates.

So if you are still wondering why the so called “great employment data” or “improving economy” mantras from the MSM haven’t yet moved the Fed to raise, interest rates it is because 7 years of ZIRP has caused asset prices, and the economy as a whole, to become completely addicted to free money. This is why our central bank is not only petrified to commence the interest rate liftoff; but is more than likely resigned itself into being stuck with some form of ZIRP and QE…forever. To learn more about Michael Pento’s financial management services CLICK HERE.  You can also sign up for Michael Pento's weekly podcast at his website.

***KWN has now released the extraordinary audio interview with Gerald Celente, where he discusses the coming collapse, why gold is going to skyrocket as well as what the world will look like in the aftermath of the coming disaster what surprises, and you can listen to it by CLICKING HERE OR ON THE IMAGE BELOW.

***ALSO JUST RELEASED: What The Keynote Speaker Who Addressed The Federal Reserve, IMF And World Bank, Just Told Me Is Terrifying CLICK HERE.

European Producer Price Index Is Now A Mind-Blowing 31.4% But Here Is The Systemic Achilles Heel