Today a former White House official stunned King World News by saying the United States is already at war with China and Russia.  Former presidential adviser and member of the U.S. President's Working Group on Financial Markets, Dr. Philippa Malmgren, also discussed how and where this dangerous war is taking place and why the public is totally unaware of it up to now.

Eric King:  “Because you are friends with former defense ministers you are up to speed on geopolitics, but I kind of laughed because NATO was talking about creating a ‘Spearhead Force’ of 3,000 – 4,000 soldiers, and the United States said they are going to send 100 tanks to the Baltic States. (Laughter)”

Dr. Malmgren:  “I was commissioned to write a 90 page study.  That gets into this issue of how modern wars are conducted.  It isn’t with boots on the ground and tanks any more.  Increasingly these things (wars) are fought in cyberspace and we’ve seen that happen recently with North Korea.  Cyberwarfare and space is really where the action is….

"The United States, Russia, and China are all vying for dominance over high-altitude satellites, which dominate all the guidance and communications systems for the conduct of warfare.  And increasingly (we are seeing) stealthy methods of conducting conflict.

For example, the Russians have been very active recently in showing their dominance in the Baltic Sea, which dictates who dominants Scandinavia and the Baltic countries.  And in doing that, it’s not that they have so many ships or better quality ships, it’s how effectively they’ve been able to show they can take territory if they want to.

The Danes released a report showing that during the largest naval exercise held last summer by the Russians, since the Soviet period, in part what they were doing was practicing taking and seizing an island in the Baltic which currently belongs to Denmark.  And it was so interesting they (Russia) picked the very week that the Danes held the equivalent of Davos — the meeting where every single political leader in that nation happens to be on that island at that time.

The question is:  If the Russians were to take a Danish island, would President Obama respond?  And I think the Russian view is, 'No.'  That’s an interesting question because then it doesn’t even matter how many (men, tanks, and planes) you have.  The question is:  Would you be willing to deploy all of your capabilities, including in cyberspace and real space?  And the answer there is less obvious.

So think about the conduct of conflict because it may not look the same as it did in the past.  War is a subject where innovation matters.”

Eric King:  “So this next war is to be fought in space and over the internet?”

Dr. Malmgren:  “Conflict is already occurring in that arena.  And it’s interesting how the public either doesn’t know about it or doesn’t want to know about it.  I was recently at a meeting with a lot of very senior people from the defense community, and their view is that we are already in a nose-to-nose confrontation (war) with China and Russia.  But these (wars) are being conducted through cyberspace rather than through traditional conventional weapons. 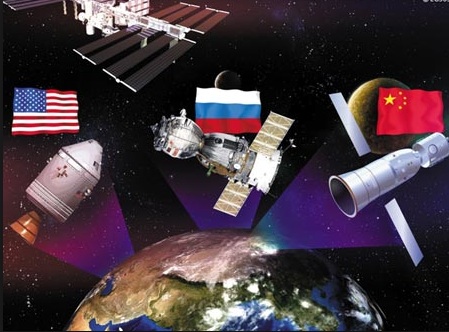 Although having said that, we’ve had so many near misses between Russian fighter jets and NATO or American fighter jets.  There have been a huge number of air incursions by the Russians into western European airspace and Japanese airspace.  And the same with the Chinese — we’ve had a number of near misses.

In fact, when President Obama did his recent trip to Asia he signed a deal with President Xi of China where they basically agreed to set up a hotline between Beijing and Washington that’s exclusively devoted to a ‘Near-miss’ between any U.S. or Asian allied aircraft or ships that might occur with Chinese aircraft or ships.

Now, you wouldn’t be doing that unless you were expecting more of these things to occur.  Meanwhile, there is no such hotline anymore between Washington and Moscow.” KWN has now released the incredible Dr. Philippa Malmgren audio interview which discusses the war that is raging between the United States, Russia and China, stunning 2015 predictions, the war in the gold market and much more. This is one of Dr. Malmgren's most important audio interviews and you can listen to it by CLICKING HERE OR ON THE IMAGE BELOW.