Greyerz Just Warned Central Banks Are Now In Panic Mode, Worried The Financial System May Disappear Into A Black Hole

As the world edges closer to the next crisis, today the man who has become legendary for his predictions on QE and historic moves in currencies just warned central banks are now panicking behind the scenes, worried the financial system may disappear into a black hole.

They Will Fail, Followed By Panic And Despair
July 28 (King World News) – Egon von Greyerz:  “The messages from the ECB and the Fed couldn’t be clearer. They are seeing major problems in the financial system and in the world economy and they will do whatever it takes to save the system. But they will fail.

The autumn of 2019 will see a major shift in sentiment as markets turn from a secular bull to a secular bear.  We are likely to see major crashes in many global stock markets. Virtually no one is prepared for this so there will be both panic and despair. 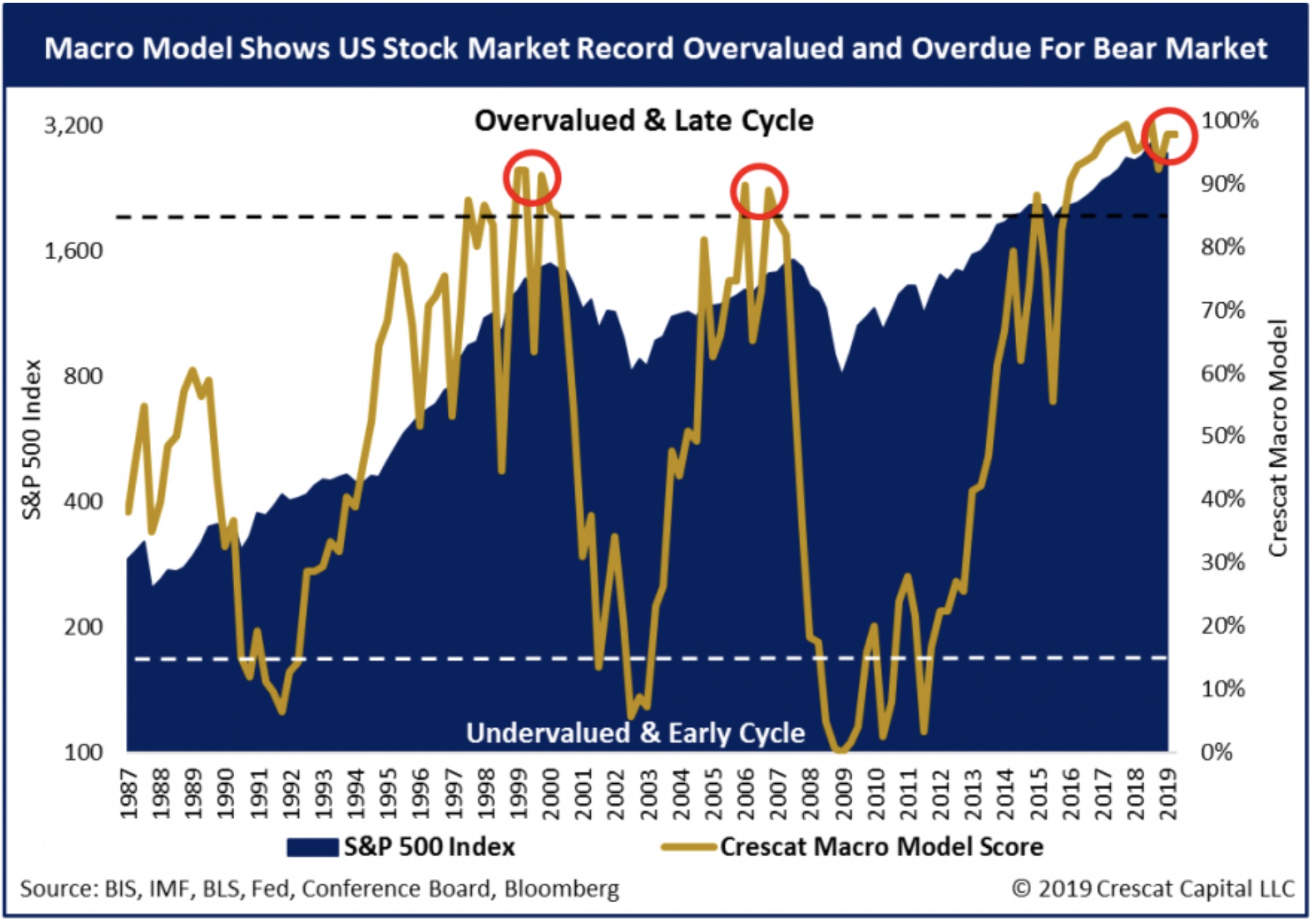 The bearer of bad news is at best ignored or at worst executed. Hopefully I will avoid both those destinies, in spite of continuing to alert people to the potentially cataclysmic dangers ahead. As I warned readers last week, stocks, bonds and derivatives will at some point go to no bid. This means that these markets will fall precipitously with no buyer offering to buy crashing assets at any price…

Most people will totally ignore this advice. The majority of investors have total faith in central banks’ ability to rescue the world yet again by printing endless amounts of money and lowering interest rates.

Panic Mode
Both the Fed and the ECB are now in panic mode, although not yet showing it openly. The Fed is likely to lower rates by as much as 1/2% this week and the ECB has told the world that they will do whatever takes.

Draghi said last week that there is:

“need for a highly accommodative stance of monetary policy for a prolonged period of time, as inflation rates, both realized and projected, have been persistently below levels that are in line with its aim.” As a result, the Governing Council noted that it was “determined to act, in line with its commitment to symmetry in the inflation aim. It therefore stands ready to adjust all of its instruments, as appropriate, to ensure that inflation moves towards its aim in a sustained manner.”

As a result, the German 10 year Bund has just gone negative and the same thing has happened in France. This is an absolutely crazy policy to push rates down in an attempt to create inflation. Central bankers know that inflation is bad for the economy. An inflation rate of 2% means that prices double every 36 years. In the 1970s, I experienced inflation of 15% or above in the UK for many years. A 15% inflation means that prices double every 5 years. Inflation is not desirable for consumers, nor for savers or pensioners.

It Will Disappear Into A Black Hole
In my view, the ECB gobbledygook in the quote above hides a much more serious problem than low inflation. “Symmetry in the inflation aim” is typical central bank meaningless speak, phrased so no one can understand it. The problem lies in the financial system. The German banking system is bust with Deutsche Bank (DB) going from bad to worse. Their bad loans are sufficient to collapse the bank and their derivatives portfolio will bankrupt not just the Bundesbank but also Germany and the ECB. DB has derivatives of EUR 45 trillion. That is 13x German GDP. This means that when derivatives go no bid, which is virtually certain, the €45 trillion will just disappear into a black hole with zero value.

It is not only DB and German banks that are bankrupt, but so are Italian, French, Spanish and Greek banks, plus many others. And the ECB is totally bust. It has a balance sheet of EUR 4.7 trillion and 40% of that is loans to EU member states. The capital and reserves of the ECB is EUR 105 billion. So the net worth of the ECB is 2% of the total balance sheet.  This means that loan losses of 2% are enough to bankrupt the ECB! The losses are more likely to be 50-100%, so the demise of the ECB is certain. Before that they will embark on unlimited money printing.

Of course they won’t give up easily. Draghi had already previously indicated that the ECB will do all it takes to keep the financial system afloat. His statement last week was just a confirmation of the inevitable. And the recent messages from the Fed and the ECB couldn’t be clearer. They are, at this stage, quietly panicking. Later on the panic will be obvious because what we are now seeing is the preamble to the biggest money printing bonanza in history. Only in this century global debt is up 3x from $80 trillion to $250 trillion. In an attempt to save the financial system, central banks have expanded credit by $170 trillion in the last 19 years. They have done this by printing money and reducing interest rates to zero or negative.

So we are now in an era of free or extremely cheap money, and with the coming actions of the ECB and the Fed, money will be even cheaper. The central banks clearly know that you can’t solve a debt problem with more debt, but plentiful cheap money is the only method they know. And it seems to have worked so far. But the world is now drowning in free and soon worthless money and there is much more to come.

“After us the Flood”
“Après nous le Deluge” – After us the Flood, was said by Madame de Pompadour, the mistress of the French king Louis XV. The French had just lost a war in 1757 against Prussia and the king and his mistress knew that the consequences would be disastrous for France and the French finances.

The picture on the left (below) with Obama and Bernanke was originally made for an article I wrote in 2011. Bernanke printed and borrowed more money during his reign than had ever been done in the history of the USA. But “we ain’t seen nothing yet”. The problem has now engulfed the world and the two biggest central bank chiefs, Powell and Lagarde, are going to become the biggest money printers in history. It is not just a big part of the outstanding global debt that will need to be covered since most of it won’t be repaid. If we add contingent and unfunded liabilities, social security and the $1.5 quadrillion worthless derivatives, the total money printing will be in the quadrillions. 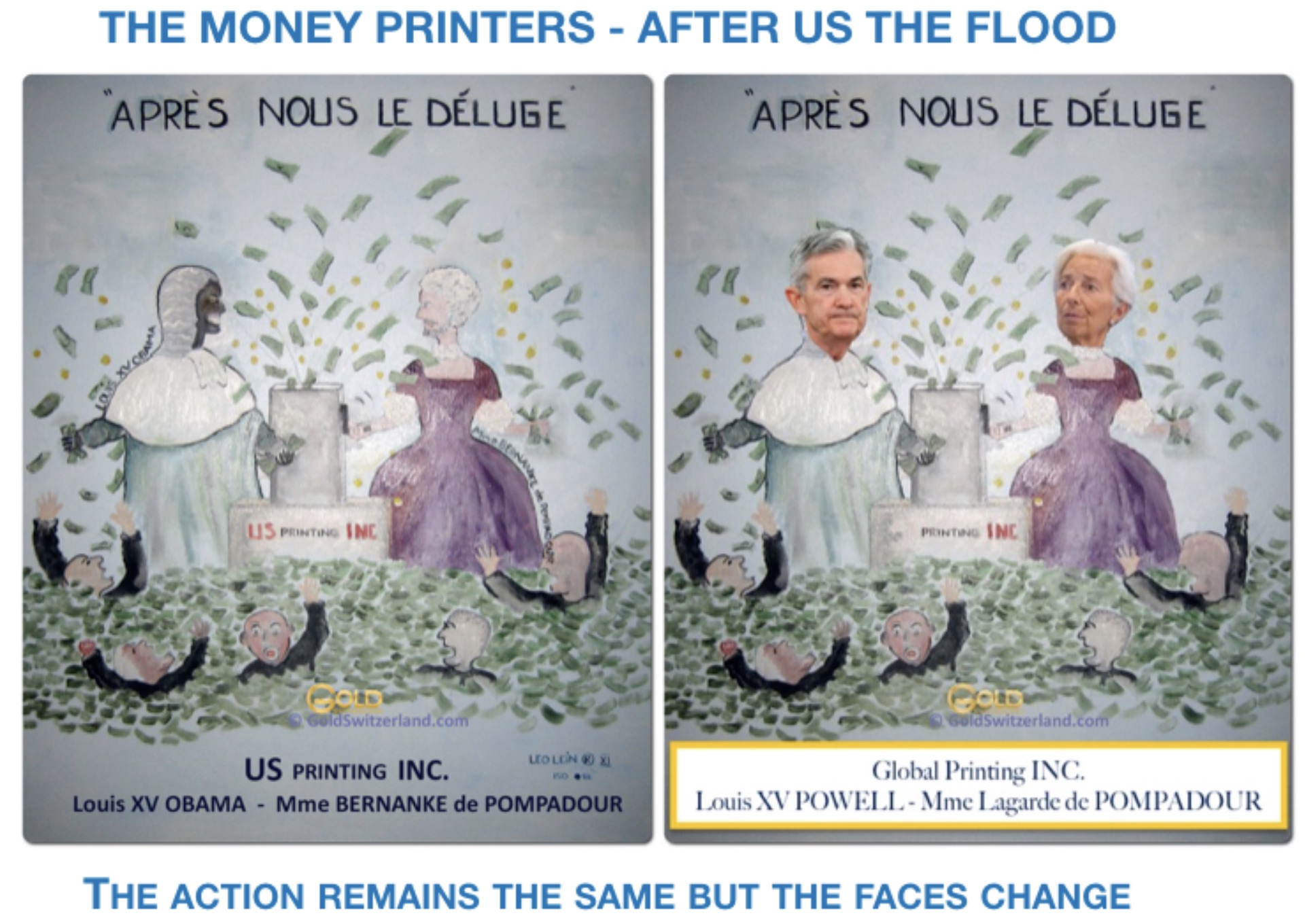 All of the money printed will be totally fake, of course, and have zero value. But before the whole financial system implodes, the world will experience a hyperinflationary period on par with that of the Weimar Republic. The big difference this time is that there will not be full employment like there was in Weimar and there won’t be a world outside to rescue us. So the whole exercise by global central banks will be totally futile. The coming hyperinflationary period will probably be brief, most likely 2-3 years, and lead to a deflationary implosion of the financial system.

When an avalanche is triggered you never know which snowflake will cause it. There are so many potential catalysts that can trigger the collapse such as debt defaults and that could come from anywhere in the world. Normally the obvious problem, like Deutsche Bank, won’t cause it since the German Bundesbank and the ECB are going to fight tooth and nail to keep DB afloat. In the end they will fail.

The most likely trigger will be when confidence evaporates. Since most asset markets are mega bubbles today, very little is needed to pop them. If we look at the biggest stock markets in the world, we find that all of them have already peaked (in US$ terms) and the US market is the last man standing. 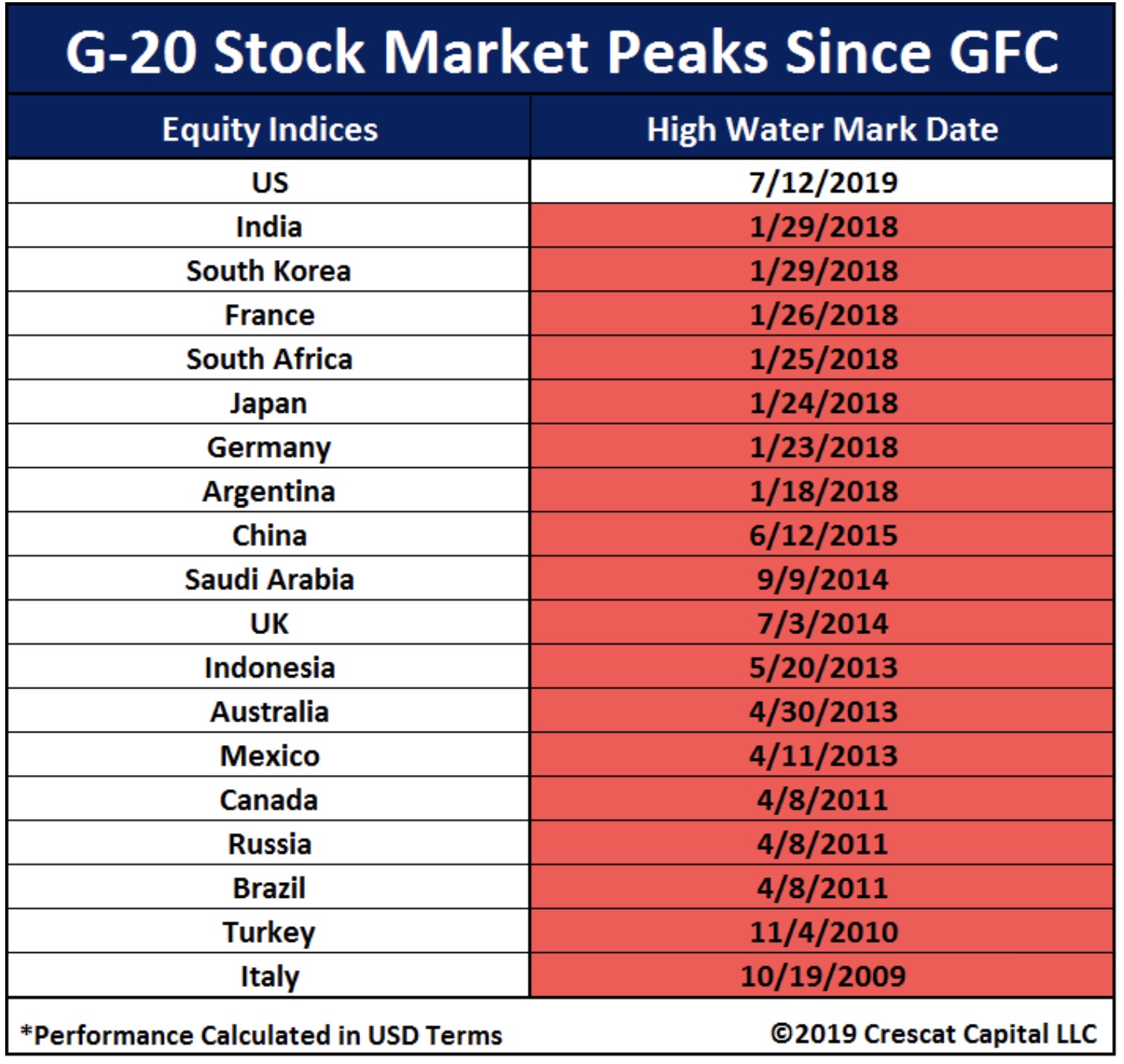 Technically the S&P index is finishing a long term bearish wedge. As the chart below shows, the momentum indicator shows divergence with price. The last 4 higher tops in the S&P from January 2018 have been accompanied by lower momentum each time (see chart below). 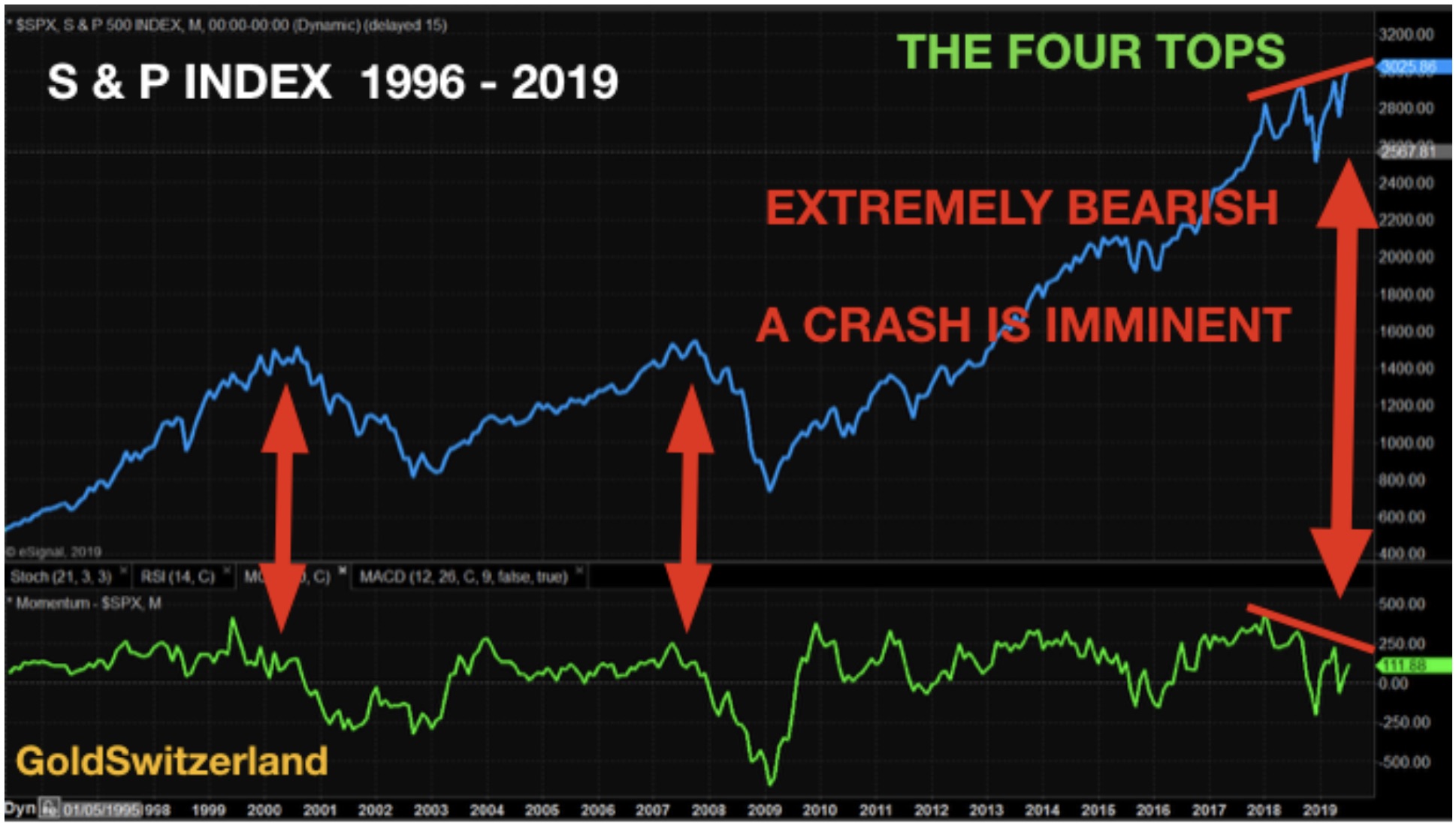 This action is extremely bearish and it is what happened at the 1999 and 2006 tops, with major collapses following. The difference this time is that we are most likely at the end of a secular bear market and the duration and magnitude of the coming fall will be massive. 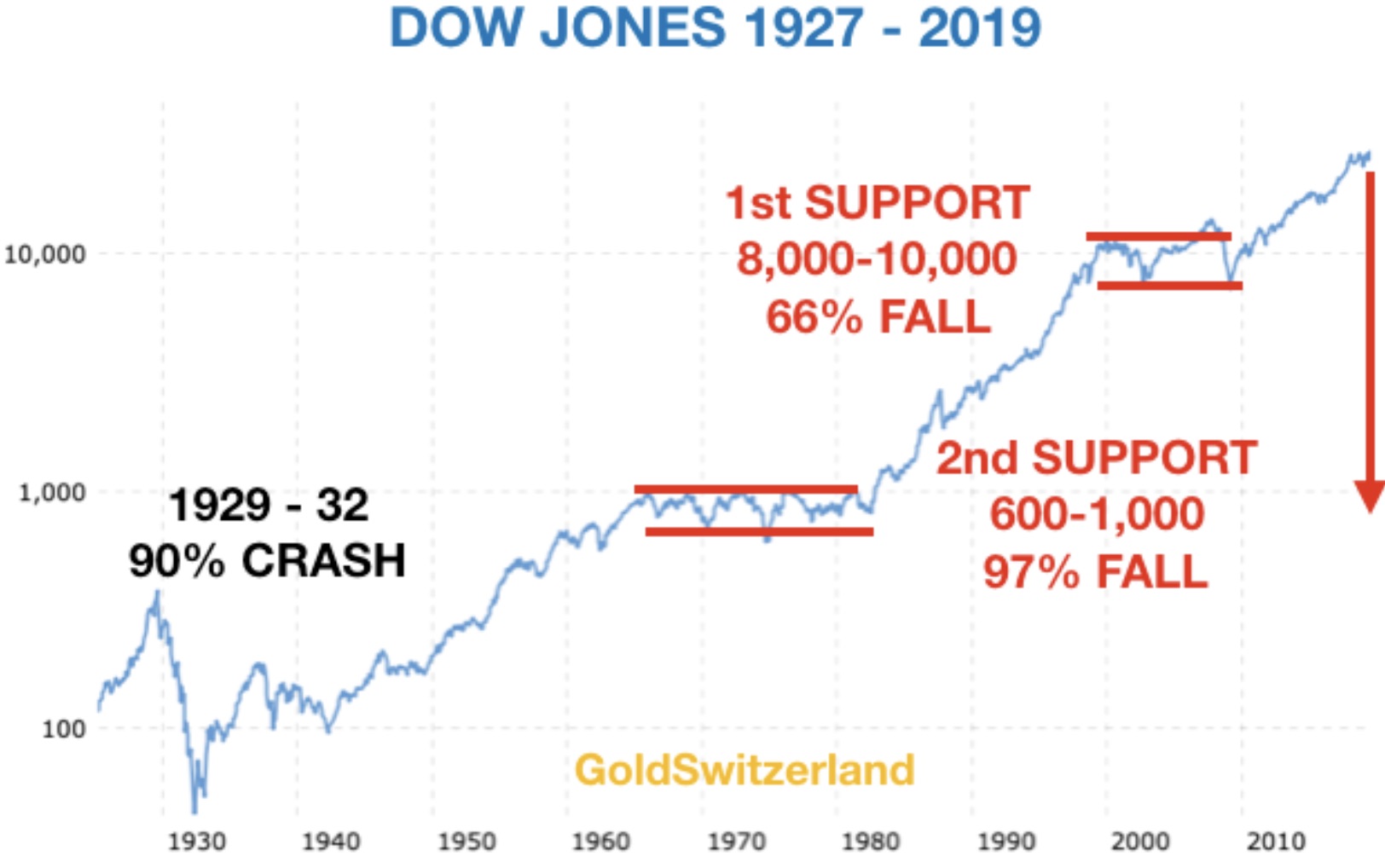 So let me be absolutely clear. My interpretation of the US stock market is that we are likely to see a major reversal of the long term trend start as soon as August 2019 and at the latest in the next three months. The reversal could initially start gradually but will very soon turn into a crash.

Could I Be Wrong?
Could I be wrong? Yes of course I could. I have been wrong before as I had underestimated central banks’ ability to kick the can down the road through irresponsible credit expansion. But all they have achieved is a bigger bubble which, when popped, will create a much more severe implosion of markets, the financial system, and the world economy.

I am not normally a betting man, although I recently accepted the challenge of a $1 million bet from someone who was convinced that gold wouldn’t break the Maginot Line of $1,350. Unfortunately the party who challenged me pulled out so I was only a moral winner. Nevertheless, I would say that there is a 95% certainty that stock markets will crater this autumn and that gold and silver will reach much higher levels.

Now Is Not The Time…
But I want to make it clear that I have no interest in making money on bets on financial instruments. Instead, my purpose in making these very strong statements on the direction of investment markets is to shake up investors and make them aware of the enormous risks that the world is currently facing. Now is not the time to think about making money on investments, but rather to lose as little as possible in the next five years, primarily because everyone will be a loser. Even if you don’t own stocks or bonds, you will lose on the value of your house or you will lose your pension, or your job or unemployment benefits. You are also likely to lose the money you have in the bank, either through pure debasement of the currency, or bail-ins, or bankruptcy of the bank.

What we must remember is that wealth preservation means trying to protect your assets from total destruction rather than making high returns. Physical gold and silver is the best insurance you can own. If they go to the levels that we expect, you are also likely to achieve major capital appreciation but that is not the primary reason for holding precious metals…For those who would like to read more of Egon von Greyerz’s fantastic articles CLICK HERE.

One Of The Greats Just Warned The Fed Needs A Half Point Cut Now, And More Soon CLICK HERE TO READ

Gold Pulls Back, A Brave New World, Silver Could Go Straight To $20, 1929 All Over Again? CLICK HERE TO READ