Many people around the world are trying to figure out what is really happening. Forget the propaganda and look at this carnage.

Look At This Carnage
May 19 (King World News) – Jeff Snider at Alhambra Partners:  People quite often want to know what I have against the Fed’s swaps. To begin with, they are sourced by bank reserves. My co-host partner Emil Kalinowski likes to say these latter are the equivalent of laundromat tokens, an analogy I can at least get behind. They are monetary in appearance but of (extremely) limited use.

Maybe a more comprehensive way of thinking about the Fed’s form of reserves is to equate them with gluten. This is a non-nutritious filler whose widespread purpose is to cheapen the food product by being injected in place of it, all the while fooling everyone into believing they are eating more desired content (by volume) than they really are – while causing a number of unintended side effects along the way.

Overseas dollar swaps merely add to the kabuki another layer, an extreme, almost like an accidental practice of performance art.

The Fed does not support markets but pretends to endlessly in this day and age. A market is dynamic place where agents compete to most efficiently, accurately, and brutally serve competing needs. Intermediation means something.

That’s not what any central bank does; it takes weeks to form a list after hiring the usual rent-seekers to “advise” as to its construction and detail, and then moves along in a static and predetermined fashion. Why do QE’s always come in round numbers?

How a monetary unit moves along is at least as important as what constitutes that unit, the old debate between stock and flow. It raises a series of other meaningful questions about if rotten or mutated stock might flow in the same manner desired…

To answer that, first a digression courtesy of the Treasury Department. Since the Fed’s overseas dollar swaps are, by my charge, an accident of art, so, too, is Treasury’s incomplete survey of the performance. TIC data, as I often recall, wasn’t designed to measure the eurodollar system as it evolved and so today it doesn’t; at best it manages to piece together a proxy.

But oftentimes there’s a “wow” factor to the proxy which comforts the researcher so as to let them know just how much they are on the right track. If the world melts down while the central banker smiles and pats himself on the back for a job well done, the answers to the discrepancy suddenly appear confirmed.

March 2020 was the great epicenter of what everyone hopes will be the sum total of GFC2, but what in markets (and data) looks to be instead maybe just its opening drama. In TIC, this global dollar shortage blows apart the monthly figures beginning in the way you’d expect.

About right, given events. December 2018’s total was already a record, where March’s obliterates it almost times three.

Look At This Panic Selling 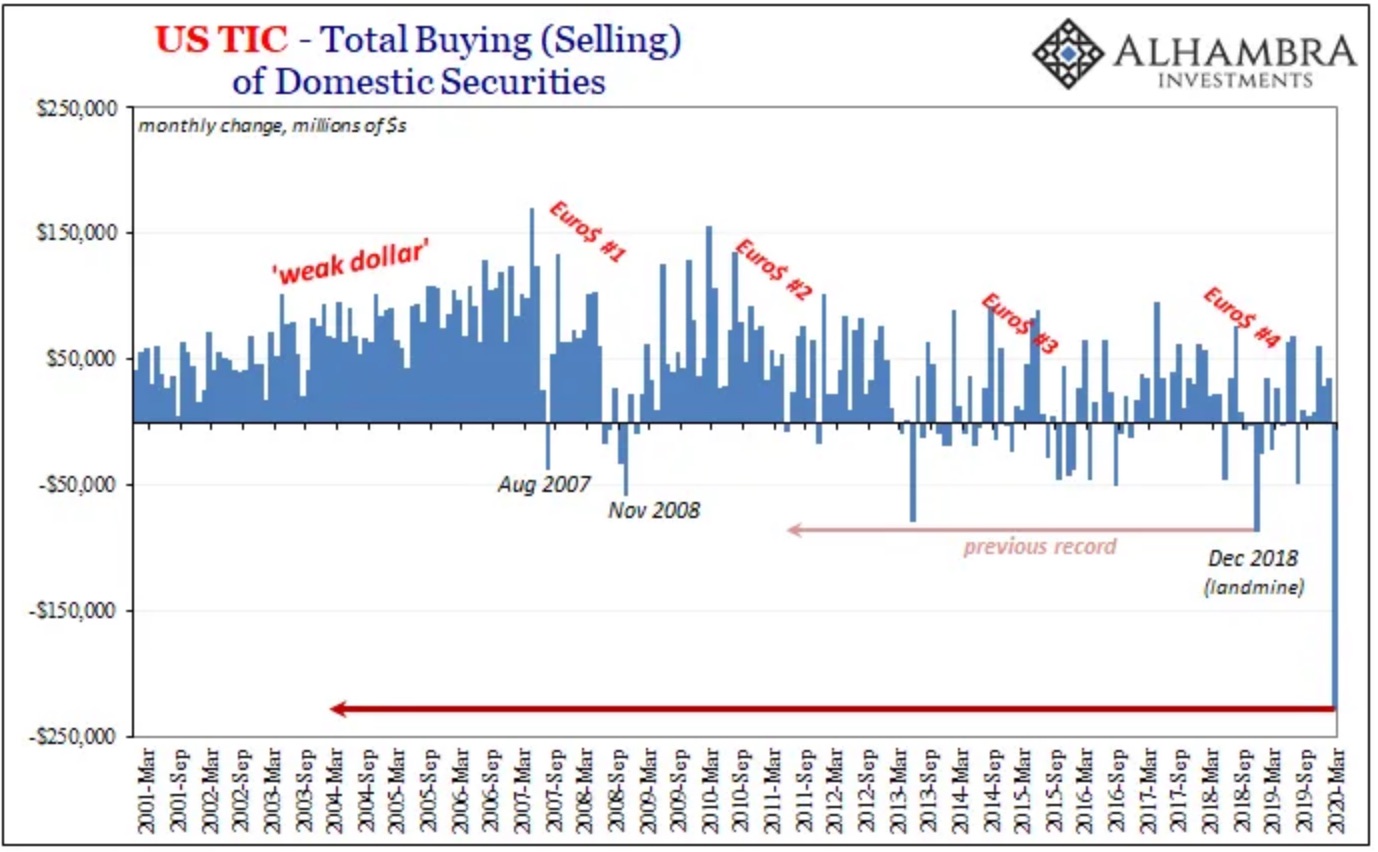 Thus, a startling (for some) proxy for, and a window into, the level of monetary destruction which must’ve been visited upon the global system by what you don’t see originating deep within the shadows.

Given that this is a bank-centered system which depends upon balance sheet factors to determine its effective systemic parameters, you might think that for what you see above it must be even worse in TIC’s proxy for cross-border balance sheet activity. If the selling in assets is bad, then the balance sheets demanding that selling must be bad, too.

And it was – only with the sign reversed, the telltale signal of panicky Fed Chairmen who’ve already fallen behind the shadow money curve. 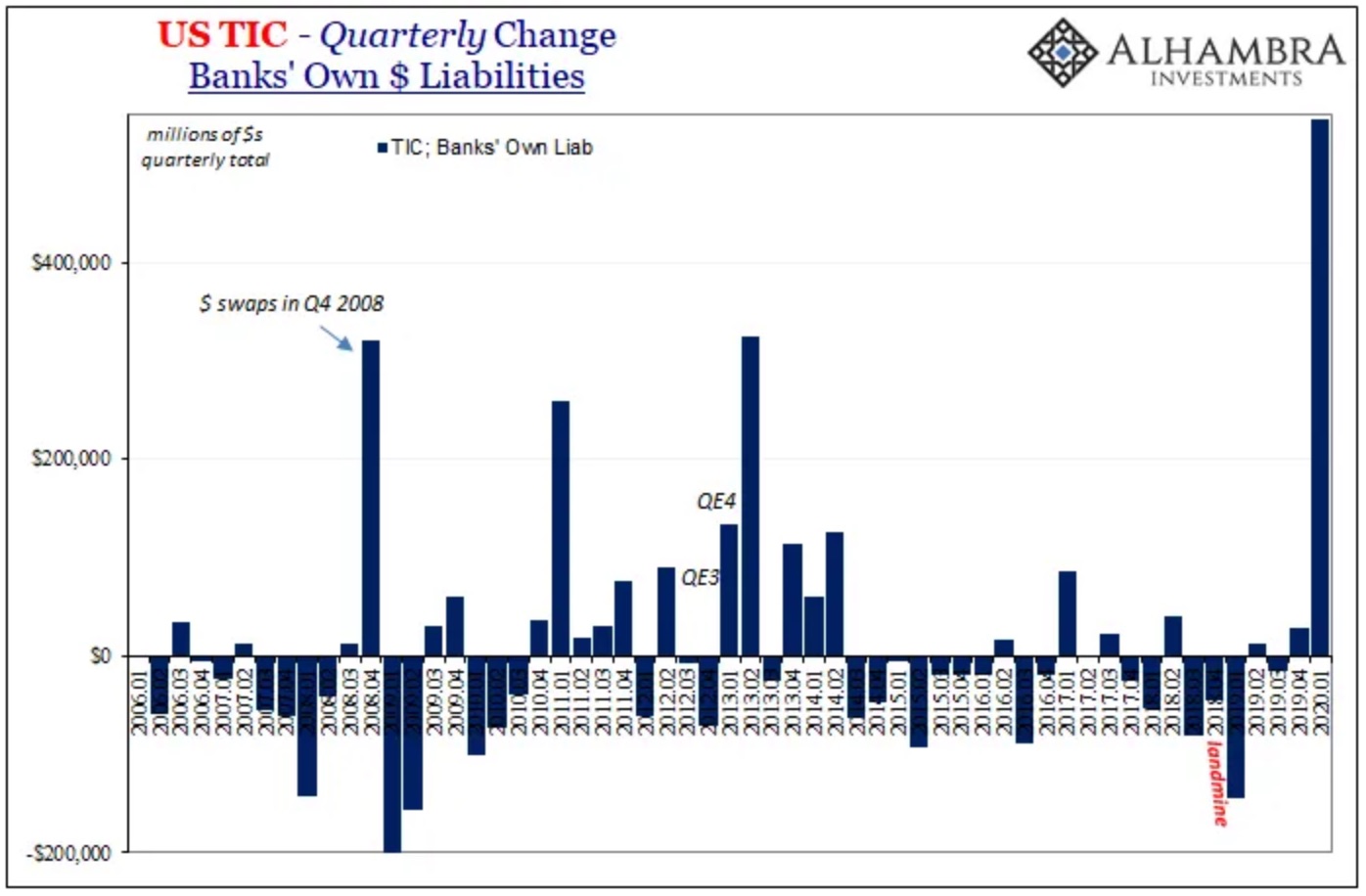 Global dollar shortage and dollar destruction is, by and large, a negative on balance sheet capacities which should show up (and most often does) as a negative number on TIC (shown above). What you’ll notice, however, is that these same can counterintuitively rise fast and furiously during the quarters when the Fed is most busy with its own balance sheet activities – QE’s but also dollar swaps.

This is the monetary gluten being injected into the process, the filler taking its place in the food chain. For example, the largest increase in reported US bank liabilities offshore had been detected in Q4 2008. That was almost entirely dollar swaps since QE was still in the planning phase (the bureaucrats carefully studying their options whilst the world melted down), and hardly a time anyone rational would equate with abundant liquidity.

In other words, you very clearly see the filler, which in many ways is the whole point and ends up explaining why the crisis continued on for many more months. 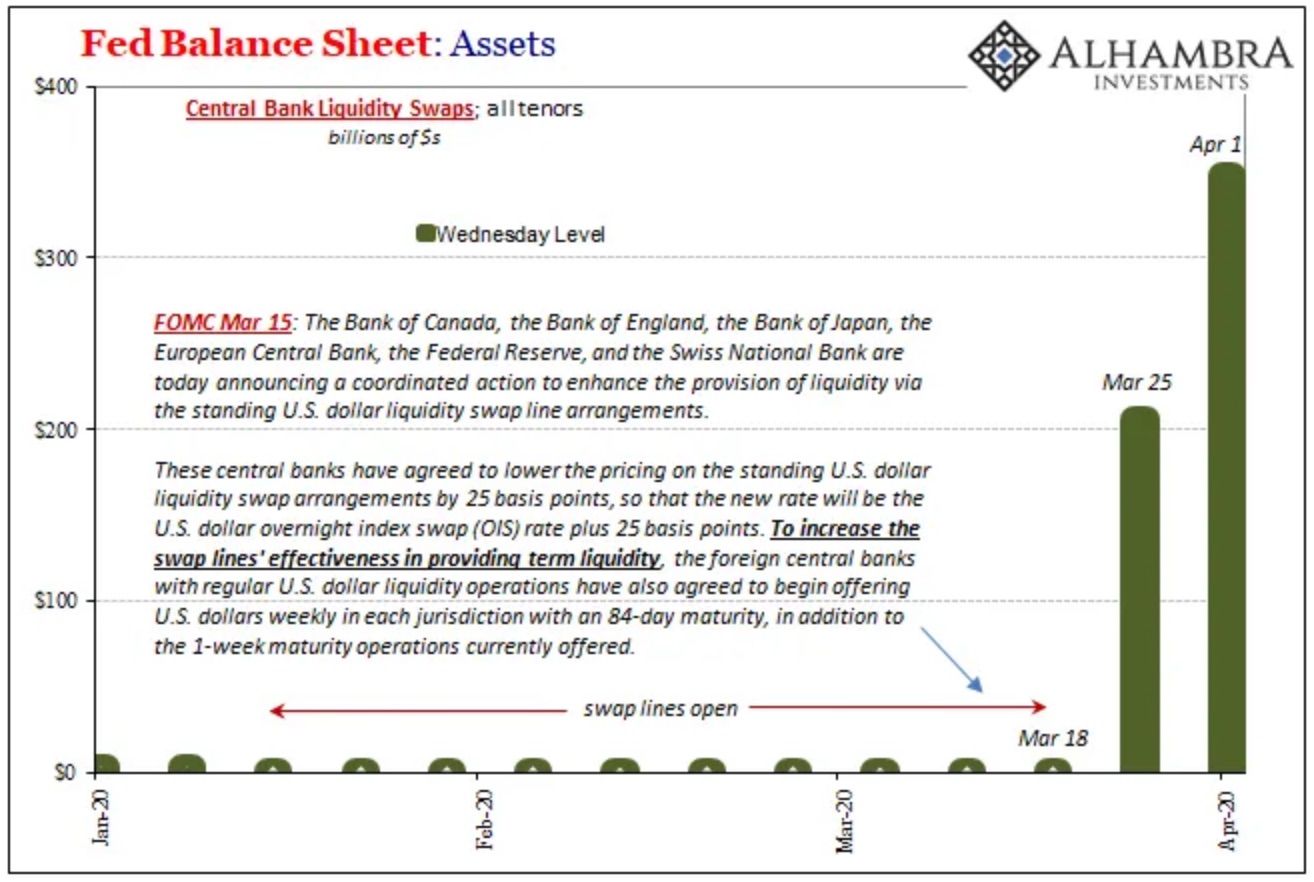 For the month of March 2020, it is unfortunate here that TIC isn’t broken down by week so that you could better appreciate the bureaucracy’s offshore action; the swaps didn’t flow until late in March, by then the worst had already moved past.

So, though TIC shows them in the same month, the total dollar “selling” of the first part happened early in the month while the gluten arrives in the second after the waves of liquidations and fire-sales (as illustrated above).

And that’s not even the worst of it. 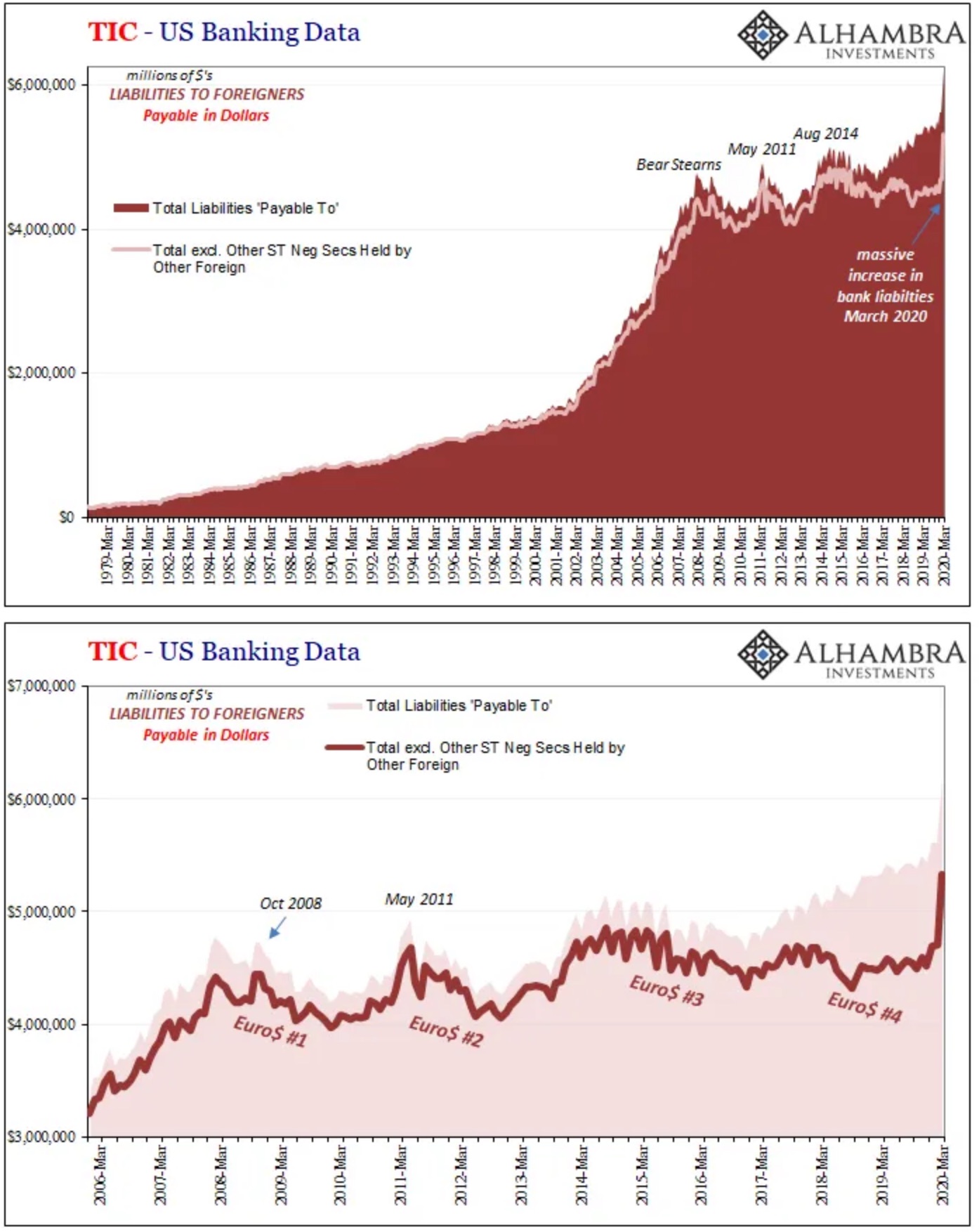 If you go looking for this huge increase in gluten, you’ll find it only in what I call the red – which is very important, and I’ll get to that in a minute – for the month of March 2020. The number here is absolutely stunning, +$600 billion in a single month unlike any other in more than forty years of data.

There was a similar style of increase in October 2008, too, though, obviously, the surge in the prior period was smaller, fitting the nature of these “rescues” with reserves (always bigger, never different). That had meant the Fed’s dollar swaps were being bid at foreign central banks (triggering the swap) by local banks (foreign, from TIC’s perspective). 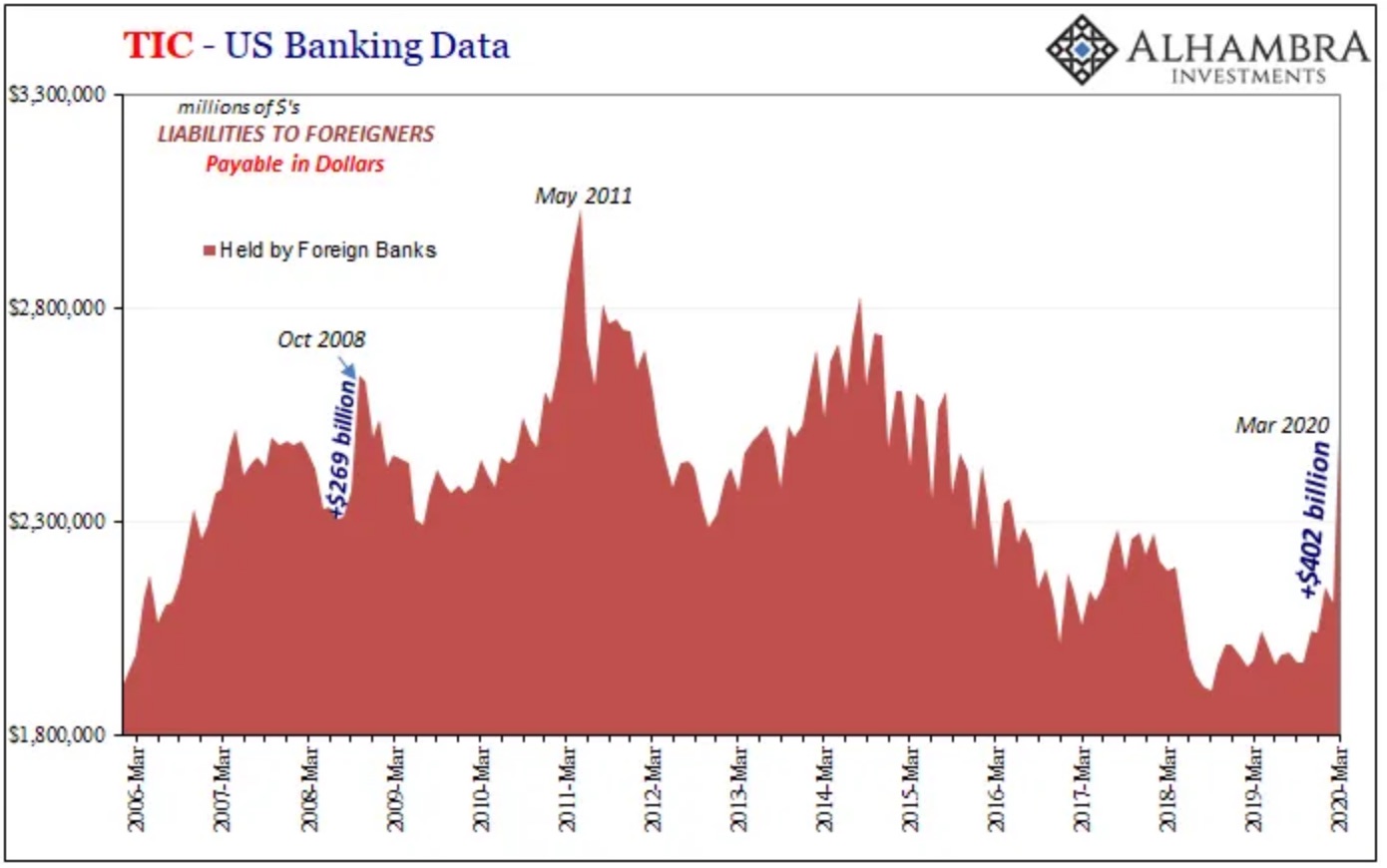 Those reading this who have become familiar with offshore money and how TIC accidentally tries to describe it have already pieced together this nonsense. For anyone who might be new, I’ll translate.

The “red” series consists of various liabilities US banks owe to foreign banks payable in dollars, but in these situations these terms can be misleading. TIC like the Fed considers foreign subsidiaries of US banks to be foreign banks at the same time domestic subs of foreign banks are treated as US banks. Therefore, the difference between foreign and US banks is where the activity takes place, not the parent institution who triggers the activity.

When you go one level deeper in the data, you find that nearly all these March (like October 2008) liabilities owed by US banks (including domestic subs of foreign names) are owed to the US banks’ foreign offices! 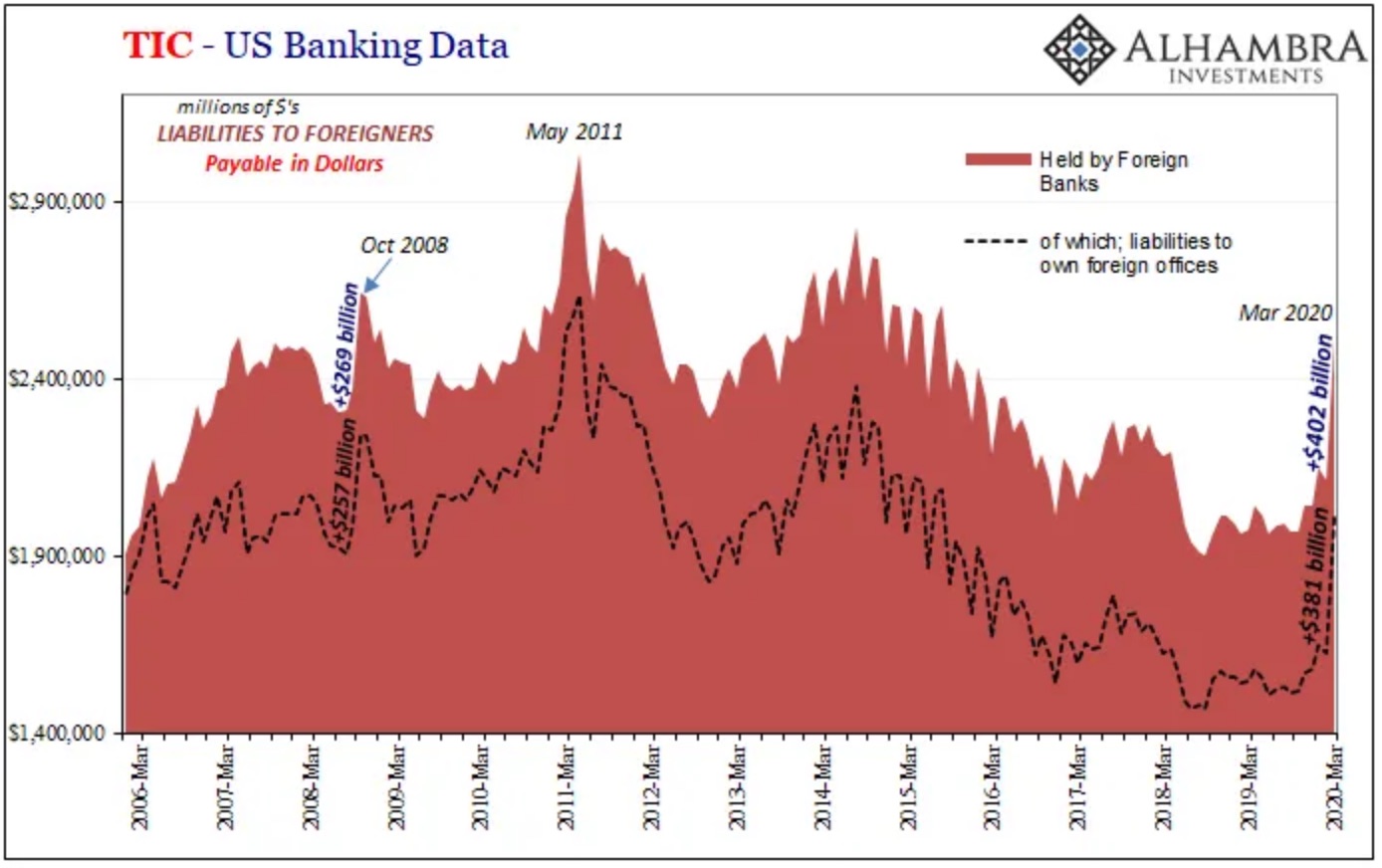 Like 2008, the Fed’s ostensibly overseas dollar swaps end up back in the US under the owed dollar liabilities of US banks only after the funding situation had become so strained as to break out into the visible light wrecking nearly every financial marketplace (including the one for UST’s).

This is how bad these central bankers are at what the public presumes is their job; but, then again, the Federal Reserve is not a dollar central bank it is instead a domestic bank authority which is why they essentially punt with these dollar swaps to begin with. The appearance of overseas operations; OSINO (overseas swaps in name only).

The global dollar shortage, the one which initiated that massive amount of total net selling in March, is global in nature. US banks like their foreign counterparts borrow onshore as well as offshore, in dollars, to fund all sorts of domestic activities. 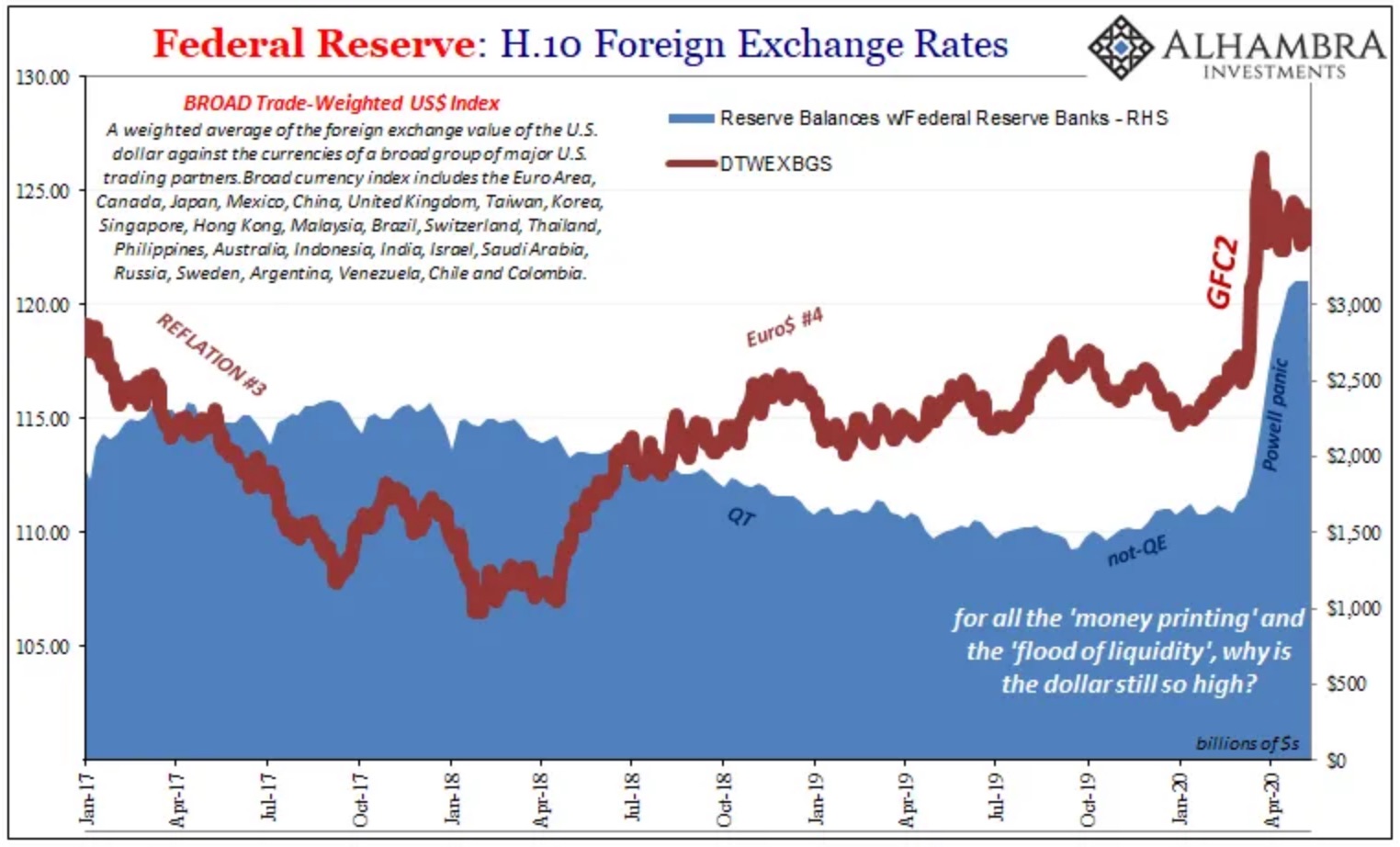 That’s not a substitute for a dynamic offshore marketplace; it is a complete farce. What about anyone else in the world who might need “dollars” who actually are foreign banks? Put another way, if Jay Powell’s overseas dollar swaps just end up back in the US anyway, what good is the overseas part of the swaps before we ever get to dealing with the gluten? Why bother with the charade? It’s as if they don’t really know what they are doing.

No need to answer the question; it is a rhetorical exercise as demonstrated once already in 2008. The only difference between then and now is the bigger numbers, both in what we can see as well as what we can also infer from the vastly more important substance that you can’t.