Look at this shocking 46% price inflation! Plus jingle mail for car keys.

Jingle Mail For Car Keys
October 20 (King World News) – Peter Boockvar:  An important earnings release was yesterday from Ally Financial who does big business in auto lending. If there was an area of excess over the past few years it was in this industry in terms of aggressive lending where many consumers were making in a year the same amount as they were spending on a car. But, thanks to a long maturity schedule and low rates, monthly payments were doable. However, the loan to value many times was well above 100% and some people are now handing back the keys just as they did with homes 15 years ago.

Continued Increase In Delinquencies
Ally said in their call, “We expect continued increases in delinquencies as consumer trends normalize post-pandemic, and we are closely monitoring additional inflationary pressures…As pandemic tailwinds normalize, we expect delinquencies and net charge-offs to migrate above 2019 levels. We expect normalized delinquencies of 3.4% to 3.8% vs 3.1% in 2019, and we expect losses to migrate toward 1.6%, which is 30 bps higher than 2019. To compensate for that incremental loss content, we’ve added 125 bps of price since 2019.” Now these are not scary or alarming numbers yet and do imply declines in used car pricing to an extent but something we should all keep an eye on in the quarters to come and the stock fell 8% yesterday in response.

Trouble For Truckers
After hearing from JB Hunt a few days ago, Landstar, another large truckload carrier had similar comments. “There continues to be a lot of unease regarding US economic conditions as we head into the fourth quarter. On a macroeconomic level, continuing inflation concerns along with possible further action by the Federal Reserve to address these concerns at the risk of causing further recessionary pressure, as well as current geopolitical tensions and the corresponding volatility in the international energy markets, add significant uncertainty to the performance of the overall domestic freight environment. Moreover, high inventory levels being reported by large retailers corresponds with what we anticipate will be decreased seasonal demand for freight services in connection with the 2022 holiday shipping season.”…

Housing
To the question I keep asking on housing out loud, ‘to what extent will home prices fall from here?,’ what will keep them elevated is still the lack of supply as so many don’t want to give up their 3% type mortgage rate. Redfin yesterday said in September “The number of homes sold dropped 25% y/o/y while new listings fell 22% – the largest declines since May 2020 and April 2020, respectively.” They went on to say, “The US housing market is at another standstill, but the driving forces are completely different from those that triggered the standstill at the start of the pandemic. This time, demand is slumping due to surging mortgage rates, but prices are being propped up by inflation and a drop in the number of people putting their homes up for sale. Many Americans are staying put because they already relocated and scored a rock bottom mortgage rate during the pandemic, so they have little incentive to move today.”

Bulls & Bears
With regards to stock market sentiment, last week’s II data had more Bears than Bulls to the greatest extent since March 2009. Yesterday, Bulls rose to 31.3% from 25% while Bears slipped to 40.3% from 44.1%. This does not reflect the big rally on Monday and Tuesday. The AAII today does and Bulls rose 2.2 pts to 22.6 after falling by 3.5 last week. Bears were little changed at 56.2, just a few weeks off the multi yr high of 60+. The CNN Fear/Greed index at 37 is up from 24 one week ago. Bottom line, this bear market is doing what others have done, death by a thousand cuts that just grinds us investors into the ground. Sentiment as a result has been down for a while and thus trying to figure out what is extreme enough to trigger a rally is getting harder. At least last week’s extreme II figure was a catalyst for this Monday and Tuesday rally but what now?

Overseas
Shifting overseas, Taiwan said its exports fell by 3.1% y/o/y in September, not as bad as the down 5% estimate but still negative after an up 2% print in August. Exports to China/Hong Kong dropped 28% y/o/y and a spokesperson at the statistics department said “Mainland China’s economic recovery is slower than originally estimated.” We know how important Taiwan’s tech sector is on the world economic stage.

Japan also reported its trade data and it was about as expected. Exports were goosed by the weak yen which touched 150 today, higher by 29% y/o/y. The weak yen also made imports really expensive and they were up 46% y/o/y. The BoJ also intervened again in the JGB market in order to keep that 10 yr beach ball yield under water at .25%. When that YCC goes at some point, that ball is going much higher (or at least to the next YCC upper range).

Also in Asia, the Bank of Indonesia hiked rates by 50 bps as expected to 4.75% and Australia reported a weaker than expected jobs number for September but bond yields there jumped anyway in response to the global bond market selloff yesterday.

We’re Not Talking About Weimar Germany, Are We?
Germany said its September PPI was up 45.8% y/o/y for a 2nd straight month and higher by 2.3% m/o/m, just shocking numbers. 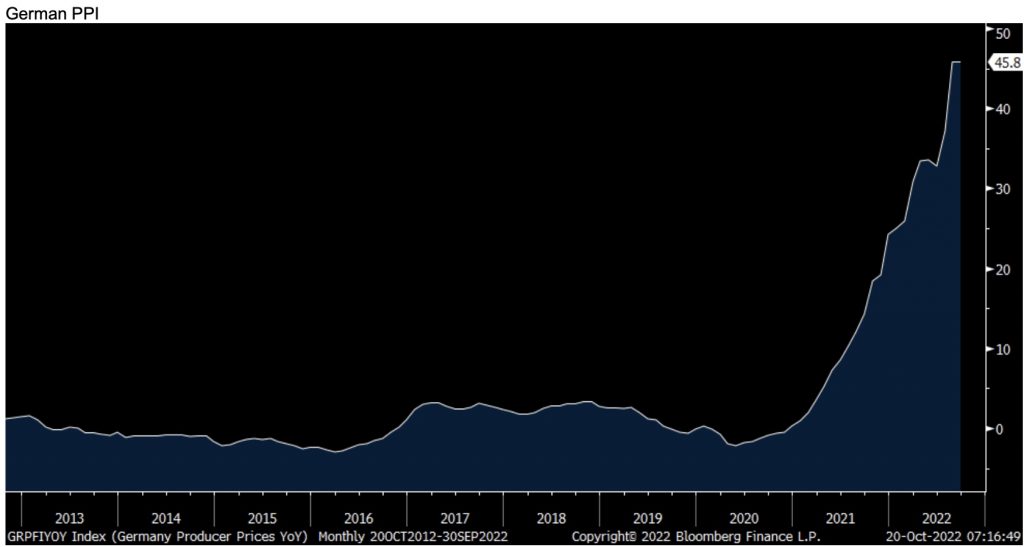 Finally, gilt yields are falling again after BoE member Ben Broadbent said he doesn’t necessarily seeing their bank rate getting as high as markets are pricing in. A 75 bps rate hike is expected for a few weeks which is what I think they do.

Things Are Tough All Over
After the negative print seen with the NY manufacturing index for October, today’s Philly index was -8.7 from -9.9 and vs the estimate of -5.0. 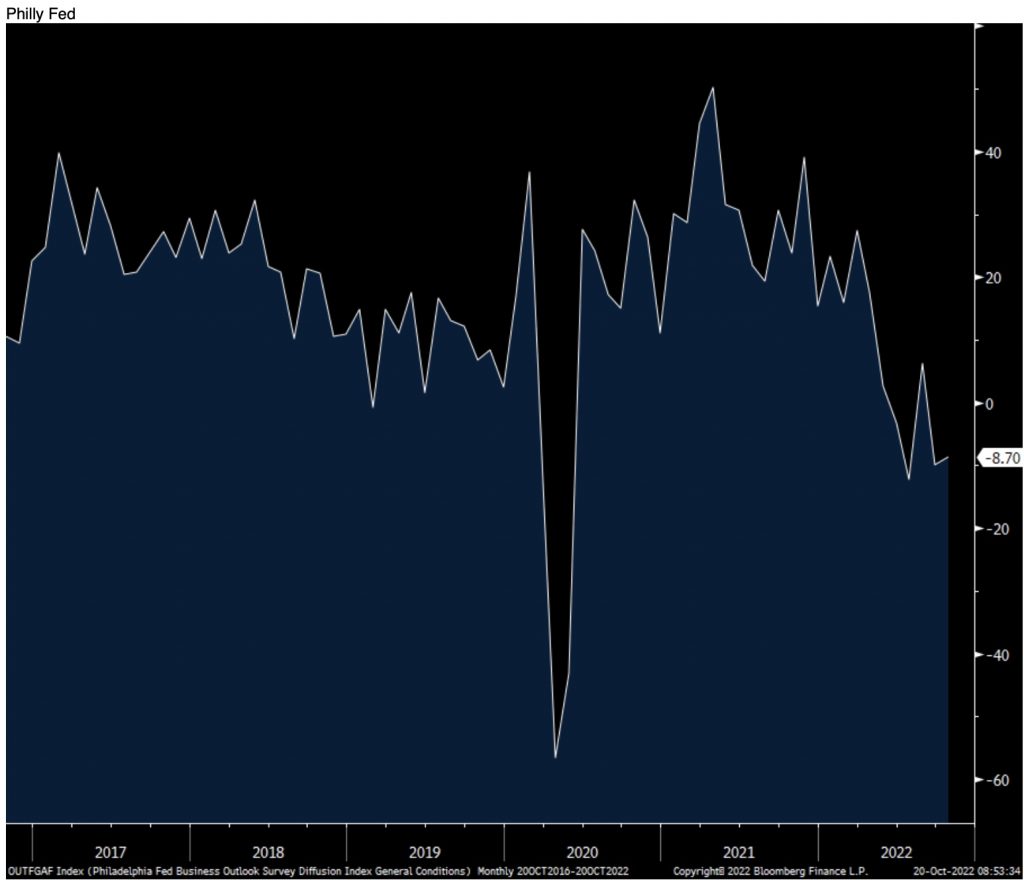 The 6 month business outlook was negative for a 5th straight month and expectations for prices paid and received fell notably. Capital spending plans were little changed.

Bottom line, US manufacturing is in a recession and should be confirmed by the other regional surveys and the national one too.

IMPORTANT: This company is about to start drilling what could be one of the largest gold discoveries in history! CLICK HERE OR ON THE IMAGE BELOW TO LEARN MORE.

A Legend In The Financial World Just Issued A Dire Warning