We are seeing major market moves as we start 2018, but this is very worrying…Plus a short note from a legend in the business.

We’re Seeing Major Market Moves As We Start 2018
January 18 (King World News) – The following is from Andrew Adams at Raymond James: Equity Put/Call Ratio Remains Near Bullish Extremes: When traders are feeling very bullish on stocks, they tend to buy more call options relative to put options and this pushes the Equity Put/Call ratio down in favor of calls. However, sentiment can become too extreme and this often signals at least a pause in the market while the bullish excesses are worked off. The ratio has recently become about as stretched as it ever gets in favor of calls and this may indicate, again, that stocks have gotten a little too hot. 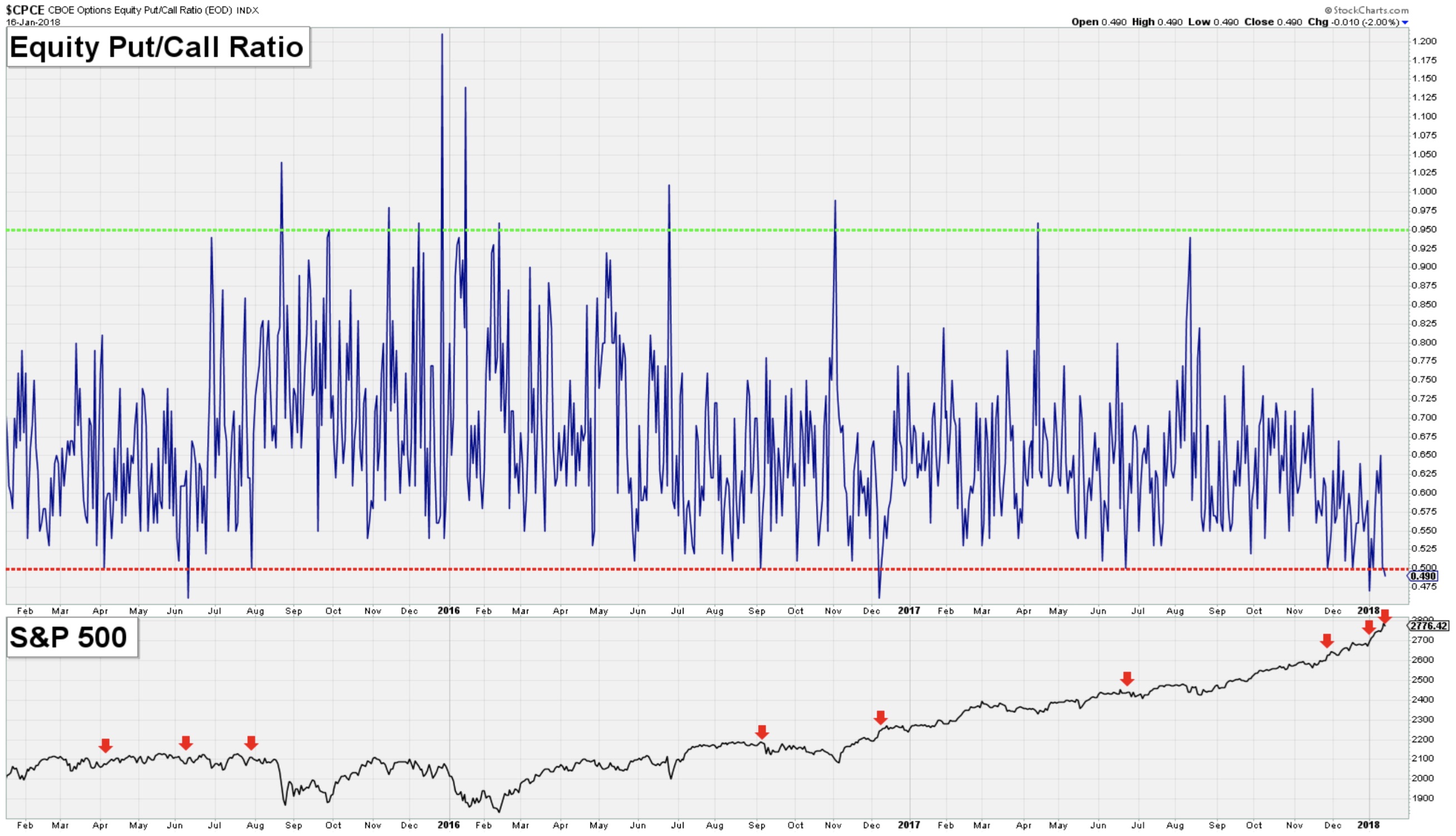 Energy About to Cool Off?
Energy has been the hottest S&P 500 sector over the last month, but it is now hitting an area of likely resistance while also being pretty stretched on the upside. It would, therefore, not be surprising to see at least a pause here, too, and maybe even a dip worth buying. As we have discussed recently, the energy sector is one of our favorite areas of the market for 2018.

Massive Energy Rally About To Cool Off

U.S. Dollar Index Breaking Down
We have been following the action in the U.S. Dollar Index fairly closely in these reports over the last few weeks and pointed out the 91-92 zone as possible support. Well, that zone has now broken and the index has hit its lowest point since the end of 2014. Because of this, the path of least resistance appears to remain on the downside, and there isn’t much obvious support again in the index until closer to 88-89. If this year is anything like last year, this could help the shares of larger companies that do significant business abroad.

US Dollar Continues Breaking Down

King World News note:  After the initial break of support, the US dollar has traded near the 90 level for a number of days.  If the dollar tumbles below 88, this would set the stage for a move to the 84 level.  If this unfolds, it be extremely bullish for gold and silver prices as well as the high-quality companies that mine the metals.

Here is a portion of today’s note from legend Art Cashin:  A Wise Man Spots A Potential Stock Indicator – The astute Jim Paulsen, who is now chief strategist at the Leuthold Group, sent out a report Tuesday, noting the history of a particular bond yield and its apparent impact on the stock market.

Here is the email that Jim sent with the report:

The U.S. bond market has been in a 38-year bull market. During this time, the 10-year yield had oscillated about its falling trend with amazing consistency and a standard deviation around this trend has provided excellent counsel surrounding whether yields were too high or too low. Moreover, the “trend” of bond yields has also been useful in assessing whether the stock market was too high or too low. That is, perhaps the “trend” can help warn equity investors when yields near a level which may bite?

Within the last month, the 10-year Treasury bond yield has risen beyond one standard deviation above trend (currently at 2.44%). Consequently, despite ongoing strength in equity prices, the recent rise in yields may already be starting to pressure the stock market. Although few perceive bond yields are yet problematic for stocks, the bond market’s historic “trend” suggests they could pack a Bite!

The only caveat is that each of those “triggers” occurred during the 38 year bond “bull market”. Would a bear market impact the “trigger” effect? We’ll watch carefully but Jim Paulsen has an absolutely outstanding record.

Overnight And Overseas – In Asia, markets are a bit mixed. Tokyo is moderately lower, while stocks in Shanghai, Hong Kong and India are moderately higher.

Europe has a mixed picture also. Paris and Frankfurt are fractionally higher but London is down modestly.

Among other assets, gold is down a touch as it continues to grapple with a resistance band. WTI is a touch higher, holding just above $64. The euro is a bit firmer against the dollar, while bond yields are a few ticks higher.

Consensus – Clock running down on deadline for a funding bill. Could temper the bullish run a bit.

***ALSO JUST RELEASED:  Legend Says This Surprise Is Why The Price of Gold Is Set To Surge Nearly $1,000 CLICK HERE.