Fed Decision Sends Gold And US Dollar Moving, But Here Are The Big Surprises

Today’s decision by the Fed to raise interest rates three quarters of a point sent gold and the US dollar on the move, but here are the big surprises.

November 2 (King World News) – Peter Boockvar:  The first two paragraphs of the FOMC statement were a copy and paste from the September meeting. The big change though came in the following paragraph when the Fed discussed the factors that would influence policy from here: “In determining the pace of future increases in the target range, the Committee will take into account the cumulative tightening of monetary policy, the lags with which monetary policy affects economic activity and inflation, and economic and financial developments.” That is quite an expansion and refinement in language from the 4th paragraph in September, that they repeated again today, when all they said was “the committee will continue to monitor the implications of incoming information for the economic outlook.”

Bottom line, the front loading is essentially over and rate hikes from here will be more cognizant of the new economic environment we’re in with respect to the much higher cost of capital and economic clouds that are circling. This is the Fed’s way of telling us that a slowdown in the pace of future hikes is upon us…

The 2 yr yield went from 4.55% to 4.46% right after while the 10 yr yield is off 3 bps from where it was just prior to the statement release. The US dollar is at the lows of the day with gold at the highs.

Also, maybe he’ll (Powell) get a question on what he thinks the needed level of bank reserves will be at the end of the day in order to avoid a repeat of 2019 and in the context of the bank regulatory world we’re in that dictates what the banks can and can’t do with their balance sheet. Bank reserves are already down about $1.2 Trillion from last December when the Fed was finally tapering QE. 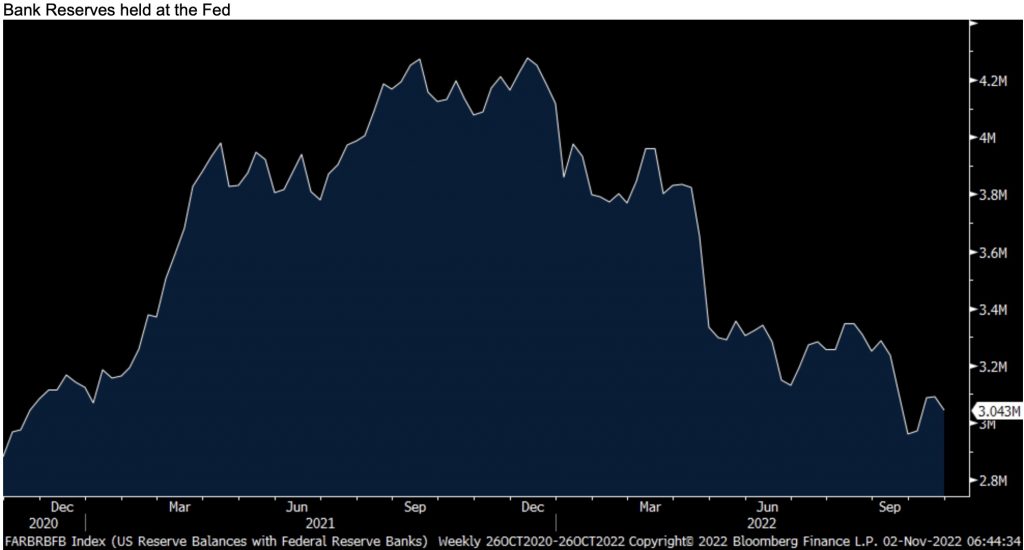 After Powell Press Conference…
What I found most interesting of Powell’s press conference so far was his comment that he wasn’t afraid of over tightening because they can always ease thereafter (use our tools) if they do over do it. So bottom line here, with Powell trying to balance the acknowledgement that they will be more sensitive to the impact of what they’ve already done while not wanting too sound dovish, he is reminding us that the destination of the fed funds rate will still be what it will be regardless now of the pace in which they get there. And when they get there, assuming they haven’t over did it, rates sill stay there for a period of time until inflation falls notably.

Leveraged Loan World
You’ve heard me talk many times about my concerns with the leveraged loan world and the floating rate debt held that is now a major pain point for those companies that either didn’t hedge or don’t have the cash flows to service it. CNBC’s Leslie Picker reported on this important story yesterday with regards to a Kroll Bond Rating Agency report on private credit. KBRA stress tested the private credit space (totaling $1.2 Trillion) and at a terminal fed funds rate of 5.25%, 60% of companies would see an increase in interest expense (thus 40% likely are hedged) and 16% of companies wouldn’t generate enough needed cash flow to service its debt and that doesn’t include a recession.

Auto Sales
Auto sales in October totaled 14.9mm which was above the estimate of 14.5mm, up from 13.5mm in September and vs 12.99mm in October 2021. Wards said “October’s surge was sparked by greater availability, moderation to price increases and delayed shipments from Q3. Boding well for the rest of the fourth quarter is that inventory will continue rising through November, which, if coupled with restraint on pricing, creates upside to deliveries. Challenges to the rest of the year include potentially tougher economy-related headwinds, as well as less impact from the temporary lifts that helped October.” As I said yesterday, the auto sector was one of the few industrial sectors that had a decent Q3. Affordability, just as it is in housing, for both new and used cars, is the big picture challenge as supply continues to improve which in turn can hopefully help the affordability on the price side as there will be no relief on the interest rate side.

Transportation
Maersk reported earnings today and they are a clear bellwether for the global shipping of goods. In its press release they said “it is clear that freight rates have peaked and started to normalize during the quarter, driven by both decreasing demand and easing of supply chain congestion…With the war in Ukraine, an energy crisis in Europe, high inflation, and a looming global recession there are plenty of dark clouds on the horizon. This weighs on consumer purchasing power which in turn impacts global transportation and logistics demand.” Here is a fresh chart of the World Container Index Shanghai to LA cost of shipping a 40 ft container. It is almost back to the $1600ish level seen before Covid. 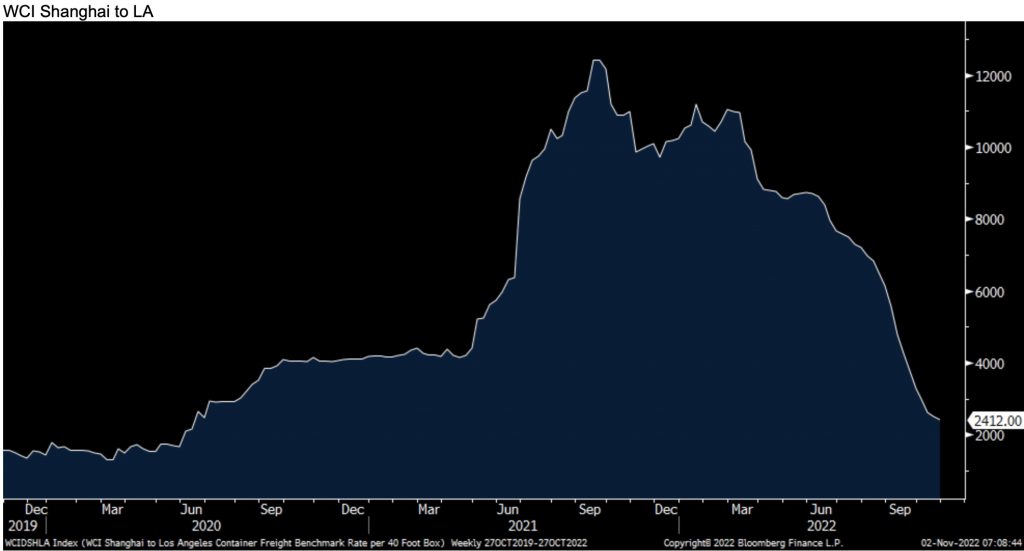 ***To listen to Gerald Celente discuss gold, real estate, major markets and much more CLICK HERE OR ON THE IMAGE BELOW.

***To listen to when the Fed will pivot and how it will impact major markets, including gold CLICK HERE OR ON THE IMAGE BELOW.

Stock Market Collapse Will Be Worse Than COVID Crash, Plus Why Silver Is Set To Massively Outperform