On the heels of an emergency Fed 1/2 point rate cut, gold soars $50 while the Dow plunges 950, but here is the big surprise.

Classic Rant
March 3 (King World News) – Sven Henrich:  “The Fed has lost all credibility. Whatever was left of it anyways.

February: The economy is strong. There’s no reason to cut.
In one week stocks drop 15%: Here’s a 50b rate cut.

Emergency Fed Rate Cut
Peter Schiff:  “As the stock market was selling off, threatening to erase yesterday’s Fed inspired record point gain, the Fed came to the rescue with an intra-meeting emergency 50 basis point rate cut. Not only will this cut not cure the Coronavirus, but it will make the U.S. economy sicker.”…

Gold, Silver, G7 Coming To The Rescue?
Ole Hansen, Head of Commodity Strategy at Saxo Bank:  “The market is betting on G7 coming to the rescue later today. If that was the case the gold – silver ratio should trade lower after hitting a 40-year high last week. So far it hasn’t (see below). 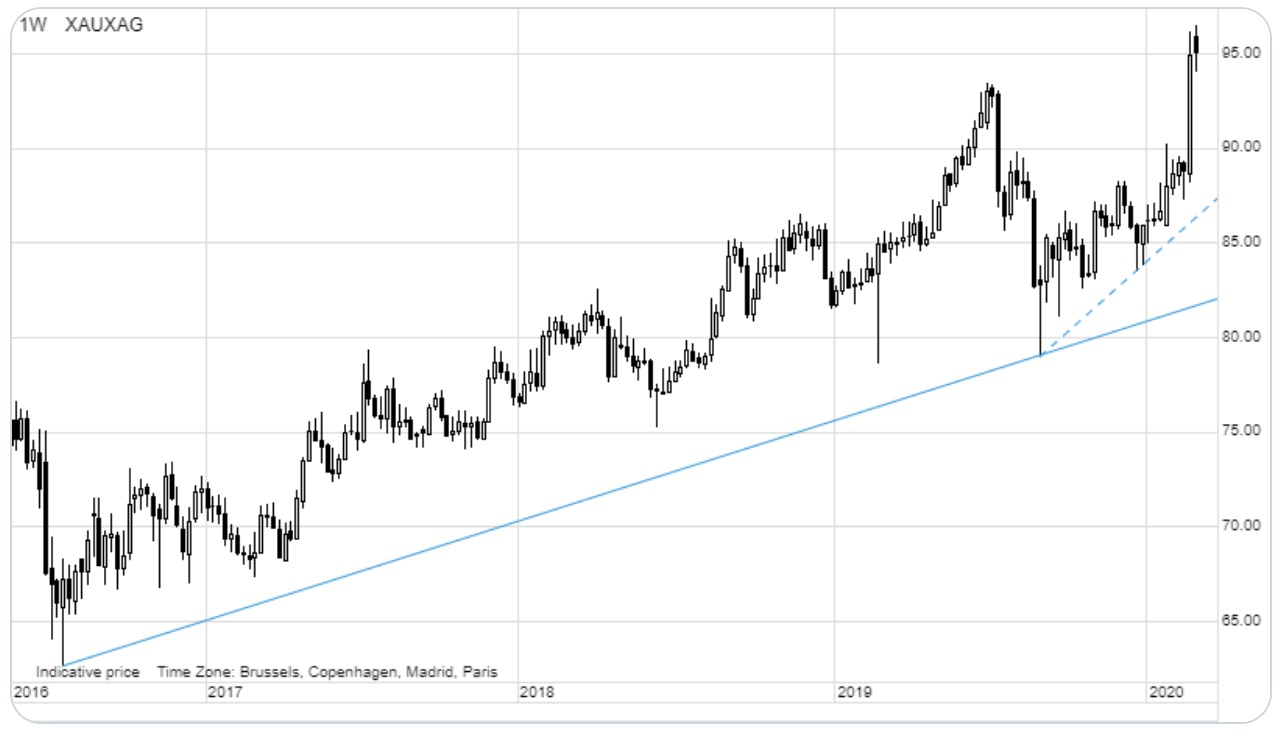 Fed Caves With Emergency Rate Cut
Peter Boockvar:  “So they gave into the peer pressure, unable to wait until the meeting in two weeks. The statement was short. “The fundamentals of the US economy remain strong. However, the coronavirus poses evolving risks to economic activity. In light of these risks and in support of achieving its maximum employment and price stability goals, the FOMC decided today to lower the target range for the fed funds rate by ½ percentage point, to 1-1.25%. The Committee is closely monitoring developments and their implications for the economic outlook and will use its tools and act as appropriate to support the economy.” There were no dissents from the voters. Powell will hold a press conference at 11am.

Bottom line, the key question here is WHEN the virus goes away and it will, does the Fed take any of this back. Also, the Fed now has just 4 cuts left before it gets back to zero. QE and its rate suppression goals would then follow but with a 10 yr yield where it is, would it matter? I know the Fed has good intentions, I just think they are overly panicking with measures that don’t address the current challenges and are needlessly wasting ammunition. Their worst nightmare is a sell on the news and we’re back to where we started focusing on the direction of the virus.

I do want to throw out something to watch with respect to the virus and I have no idea the answer. Singapore and Hong Kong, two warm weather climates right now (Singapore always at 85 degrees and humid) have been stuck at only 100 people infected for weeks now? Does it give hope that this will go away this Spring/Summer when it gets warmer most other places? Is it because of the experience of SARS, they are best prepared? Is it because of their very advanced medical systems?”

Peter Boockvar:  If you had any wonder what drove yesterday’s incredible rally, just look at all the travel and tourism stocks which were essentially flat to down implying that it was all about hopes for the Fed and other central banks. Between the Treasury market over the past week and stocks yesterday, markets have so intimidated the Fed into acting that they now have no choice but to act. As for the ECB, while they have good intentions too, they found a way yesterday to say with a straight face that in response to the “fast developing situation” of the coronavirus spread, “We stand ready to take appropriate and targeted measures, as necessary and commensurate with the underlying risks.”

Australia Cuts
The Reserve Bank of Australia cut rates by 25 bps to just .50% and left the door open for more. They of course cited the virus spread and said “The uncertainty that it is creating is also likely to affect domestic spending. The board is prepared to ease monetary policy further to support the Australian economy.”

Malaysia Cuts
Malaysia’s central bank also cut interest rates by 25 bps to 2.50% as expected. Wouldn’t it be nice to have that many rates to cut.

Also today ahead of the G7 conference call this morning, the soon to be departing BoE head Mark Carney said:

“The bank will take all necessary steps to support the UK economy and the financial system.”

They currently have their benchmark rate at just .75%. He also said that the combined impact of both fiscal and monetary stimulus globally would be “both powerful and timely.” The more important question is whether its effective and sustainable in its impact.

“Shooting Blanks Is A Real Risk”
The risk again with all of this is that the help to financial markets ends up being fleeting as investors focus instead on the economic situation and not a slightly lower cost of capital and I’ll argue that is a much worse potential situation here for central bankers and the markets than instead disappointing the markets by being honest and saying rate cuts won’t help fight the economic impact of the virus. Don’t forget about the last two rate cutting cycles where the fundamentals dominated no matter how many times the Fed tried to fight it. Bottom line, shooting blanks is the real risk.