With stocks and the dollar trading lower, here is what governments don’t want people to see.

The Great Divergence
November 9 (King World News) – Below are some key snippets from a fantastic discussion with the Incrementum Advisory Board:

Ben Hunt:  “Our view is that below the surface the US economy is actually much weaker than assumed. The next chart shows the divergence between tax receipts and the S&P 500; tax receipts are going down while the S&P is continuing to go up. 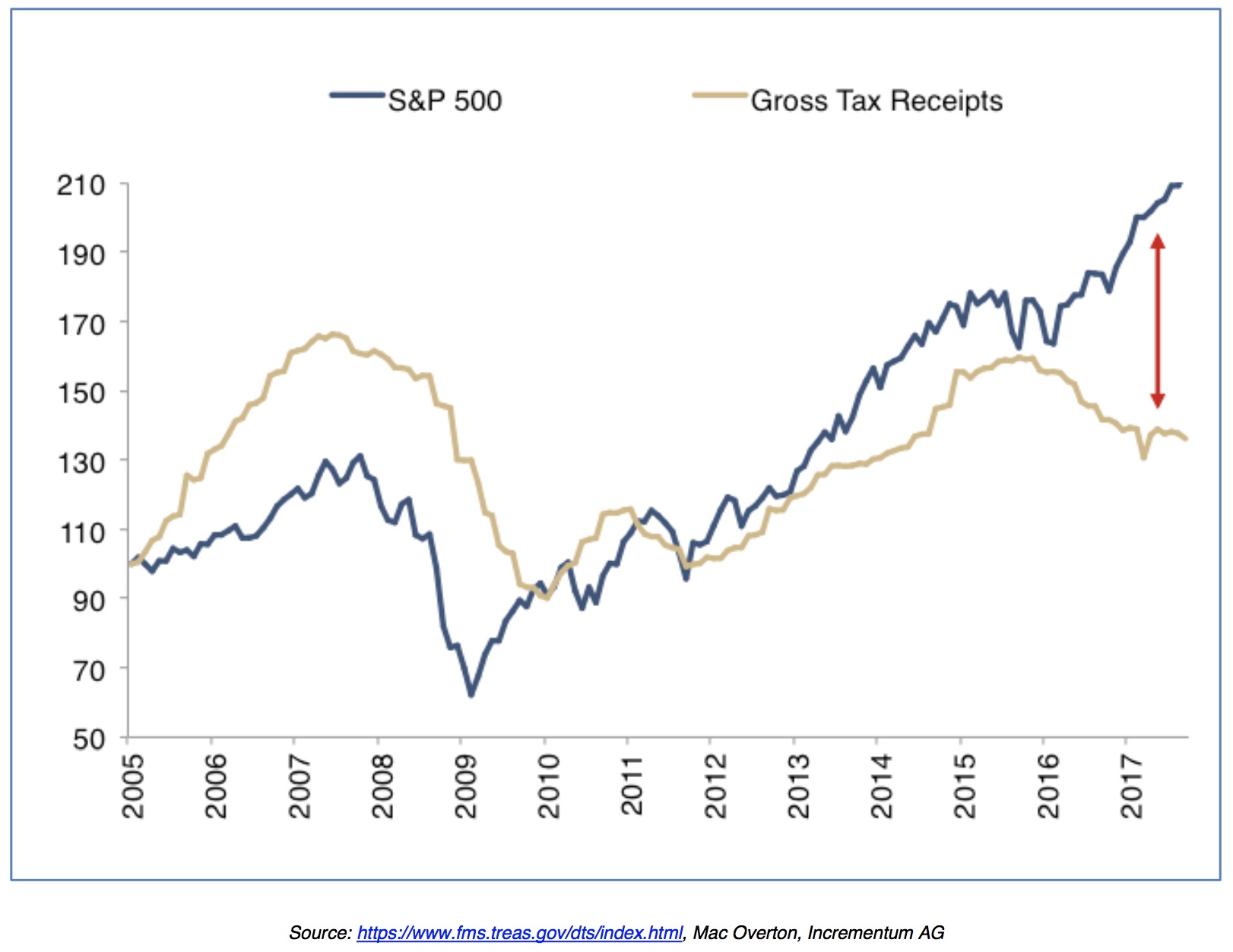 If the economy is improving, why are tax receipts going down? The way I analyze (this chart) is that consensus is not in line with what the underlying truth is.”

The Underlying Reality
Heinz Blasnik:  “I believe there is a dichotomy between the underlying reality, and what everyone believes…

And my impression is that people are aware of the dangers; they know the market is overvalued, but on the other hand there is a narrative that says:

“The market may be highly valued, but there isn’t much downside.”

And many of the warning signs that we usually see prior to a crash, are not present at the moment. For instance, margin debt usually declines for a few months before the market turns, however margin debt recently reached a new record high. In my opinion I believe that things will play out a bit differently than usual because we are in a unique situation considering all the stimulus by central banks over recent years.”

The Real World
Ben Hunt:  “I believe that what we are seeing today is price increases in the real world, for example look at how commodity prices have increased. And if you combine that with a political necessity to create a narrative in the US of rising rates, the result will be that we will get higher prices and higher rates.”

Stoferle On Gold
Ronald Stoferle (co-founder of Incrementum):  “Regarding gold, Adrian Day recently said something very interesting, he said that people are expecting too much from gold. Gold is up 12% this year and we should not forget that the current environment is not great for gold. We’ve got real estate markets doing well, the stock market, which is the biggest opportunity cost for holding gold, is doing very well, we’ve got a hawkish Fed, we’ve got low volatility and we’ve got high confidence in the banking system. But the fact that gold is up 12%, despite all these factors, is in my view very positive for gold, even though some of it is because of a weaker dollar.

Uptrend channel for the price of gold 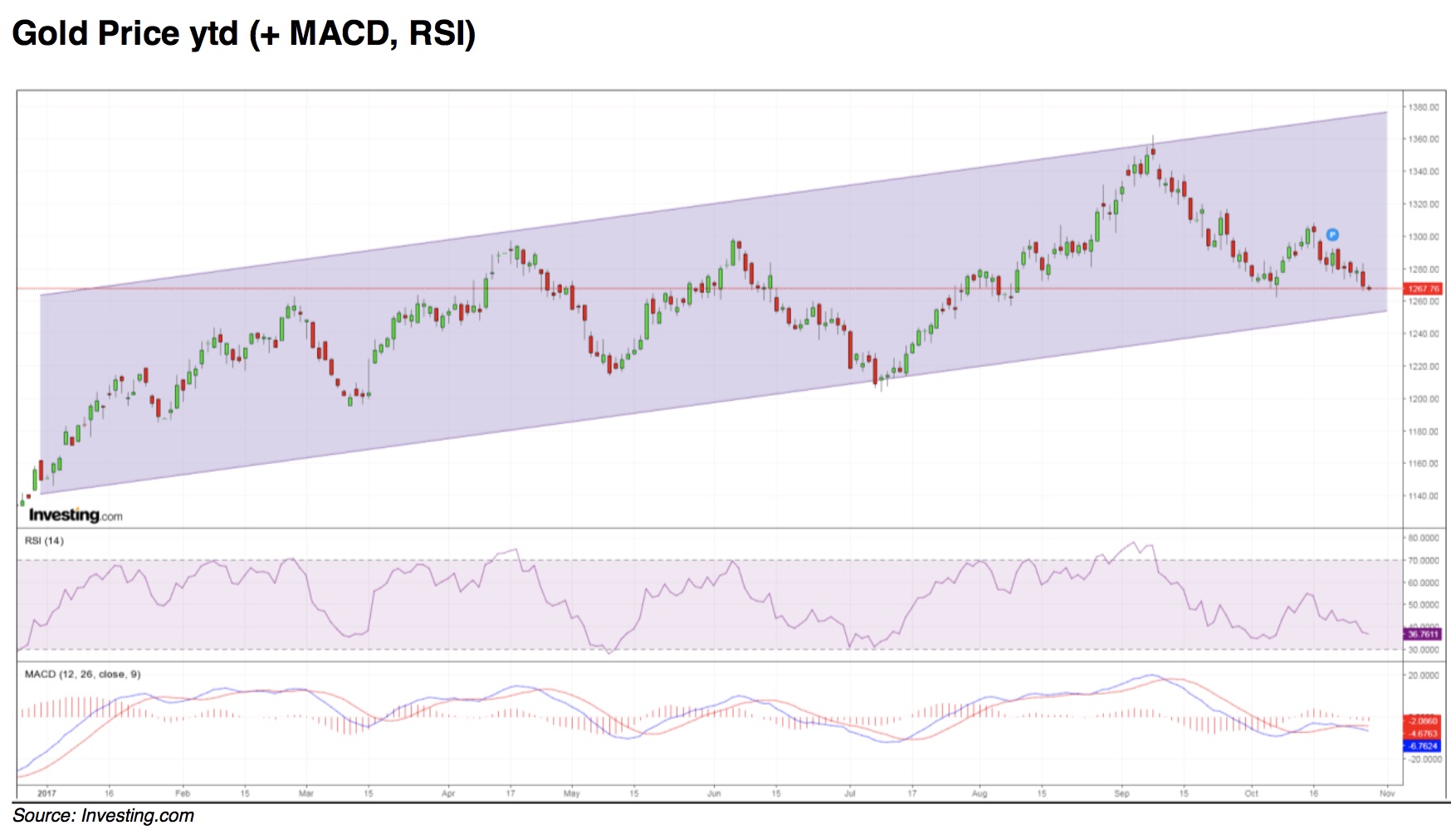 Heinz Blasnik:  “I’m watching the stock market closely because I think that at some point we will get big opportunities when the structural problems I mentioned earlier manifest themselves. (i.e., the proliferation of systematic and/or passive investment strategies and the high degree of leverage used by the former and the frequent lack of liquidity in the underlying securities held by the latter). It might only take a small decline in the market to get things going. It could for example be some news that triggers a short-term decline, which then snowballs. A way to play this would be to buy options on the VIX. These options are very cheap because the VIX is so low at the moment.

Gold, Bonds & The Dollar
And I agree with your views on gold. The environment hasn’t been bullish for gold, but it’s been doing well. One argument against gold in the short term is that speculators have a large net long position in gold, but in the medium to long term I am bullish.

Moving on to the bond market I would say that people should stay away from high yield bonds, and they could also be a good shorting opportunity. You could play it with put options, rather than straight up shorting, which could be expensive due to the high cost of carry.

Regarding currencies I think that what I said about gold is also applicable to the US dollar. In this case I think a downtrend has begun, but no one is taking it seriously yet.”

***ALSO JUST RELEASED: With The World On The Edge Of War, Here Is A Major Update On Gold, Silver And Crude Oil CLICK HERE.