Japan Dumping US Treasuries
May 3 (King World News) – Peter Boockvar:  I’ve been talking about the sharp sell off in the yen for a month plus and the potential implications that are global. There was a piece from BMO over the weekend that estimates that Japan, the biggest holder of US Treasuries owning $1.3 Trillion worth, sold $60b of US Treasuries over the past three months. Hedging out the FX risk has almost wiped out any yield pick up in the US. We’re losing the Fed as a buyer and we’re most likely going to lose further the foreign buyer at the same time US banks are already loaded up. This calculation is definitely a growing influence in this rate rise.

The biggest bond move today was in Australia after the Reserve Bank of Australia who went hugely dovish over the past few years after decades of not believing in negative real rate policy decided to hike rates by a whopping 25 bps to .35% when the estimate was only 15 bps. And there is more to come, “I expect that further increases in interest rates will be necessary over the months ahead” as “The Board is committed to doing what is necessary to ensure that inflation in Australia returns to target over time,” said Governor Philip Lowe. They are also conducting QT too as they won’t be reinvesting maturing bonds. For reference to the now .35% benchmark rate, CPI was 5.1% in Q1 and the core rate was up 3.7%. Their bond market is now priced for a 2.5% overnight rate by year end.

The market response to a now hawkish RBA that will do what it takes to get inflation DOWN after spending years trying to get inflation UP has the Aussie$ rallying, the 3 yr yield jumping by 19 bps to 3.01%, the 1st time above 3% since 2014 and the 10 yr yield was up by 14 bps to 3.40%. And this is what happens when economists running central banks get a forecast badly wrong, we get shock moves in rates. 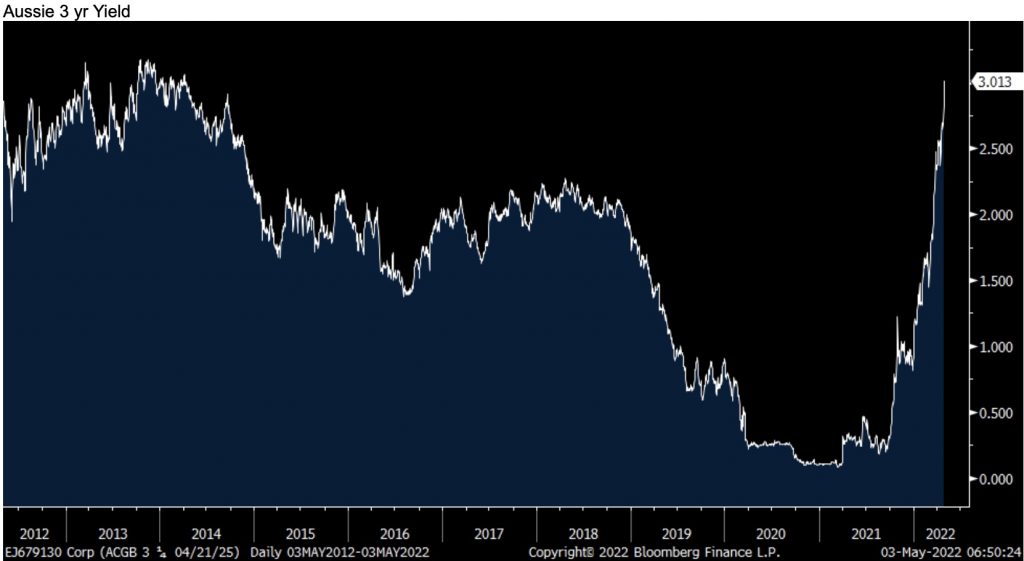 Still wanting to hike rates will be the Bank of Korea, especially after they reported today April CPI up 4.8% y/o/y, 4 tenths more than expected and up .7% from March.

Is That Print Real?
As Christine Lagarde and the ECB debate when to first hike rates from -.50% after the end of QE most likely in July, March PPI for the Eurozone rose 36.8% y/o/y and 5.3% in March alone from February. 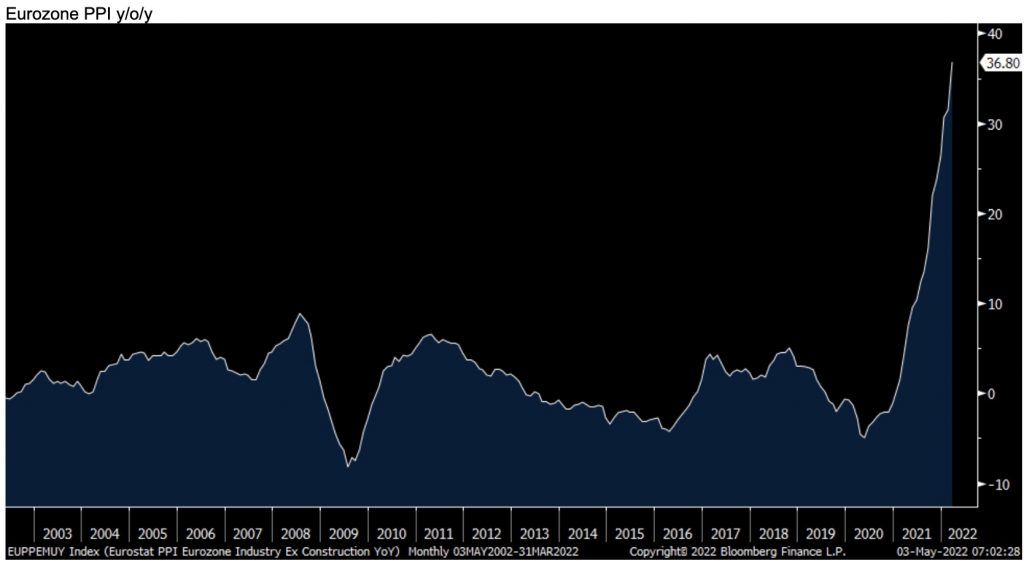 Obviously energy is a big piece of this but even taking that out saw wholesale priced climb by 2.1% m/o/m and 13.6% y/o/y. As this is a March number and we’ve already seen April CPI, the number was not market moving and bond yields are slightly lower in the region as are inflation expectations. But, it certainly reflects plenty of price pressures that remain and highlights the stagflationary situation in Europe.

Germany said the number of unemployed fell by 13k in April, about in line with the expectations of down 15k. Their unemployment rate held at 5% as forecasted. The head of the Federal Labor Agency said:

“The arrival of spring and the easing of coronavirus measures is supporting the labor market’s continued recovery. However, the development is being slowed down by Russia’s war against Ukraine.”

Notwithstanding a still firm labor market, Germany’s economy is at high odds of being on the cusp of an economic contraction for reasons we all know…

We’ve also been following the trucking industry closely for clues on the supply/demand situation for goods and manufacturing. We’ve heard a lot about softening spot rates over the past month but contract pricing that has remain stable. Yesterday DAT though said this:

“Even though there are plenty of positive demand indicators for long haul truckload carriers, excess capacity in the market is driving spot rates down. Even contract rates appear to have plateaued and are beginning to decrease.”

Dupont, a company whose specialty chemicals end up about everywhere, said this in their earnings press release today:

MUST LISTEN:  Egon von Greyerz’s Partner Matthew Piepenburg gave an absolutely incredible interview about the coming chaos investors should expect to see in terms of inflation and major markets as well as gold, silver, and what people will need to do in order to protect themselves from the coming upheaval in global markets. I would encourage everyone around the world to listen to this remarkable interview by CLICKING HERE OR ON THE IMAGE BELOW.

To listen to Alasdair Macleod discuss Russia backing the ruble with gold and why the price of gold’s rise will be unstoppable CLICK HERE OR ON THE IMAGE BELOW.

This Is Really Good News For Gold, Silver & Mining Shares!